'Twas the weekend before Christmas, and I hadn't done ANY holiday decorating. Unless you count last week's Tablescape Thursday post, "Fire & Ice, a Holiday Table" (HERE). That table setting had been disassembled, of course, and its various components had been put away.

On short notice, I agreed to co-host a holiday dinner party for ten people on Sunday night and provide the setting (as in venue). The co-hostess offered to bring the main course, and others provided delicious homemade rolls and wonderful appetizers. With Christmas music playing softly in the background, I put up the tree (artificial) on Saturday morning. It's one of those old-fashioned ones with color-coded branches that have to be inserted in the trunk. Unfortunately, the colors had mostly worn away, so it was a challenge to keep things looking symmetrical. But I persevered!

More on the tree later, but here's the table in the dining room. It's much simpler than what I usually do for Tablescape Thursdays. When it's an actual dinner party, I like giving the guests enough space to enjoy the meal in comfort ... 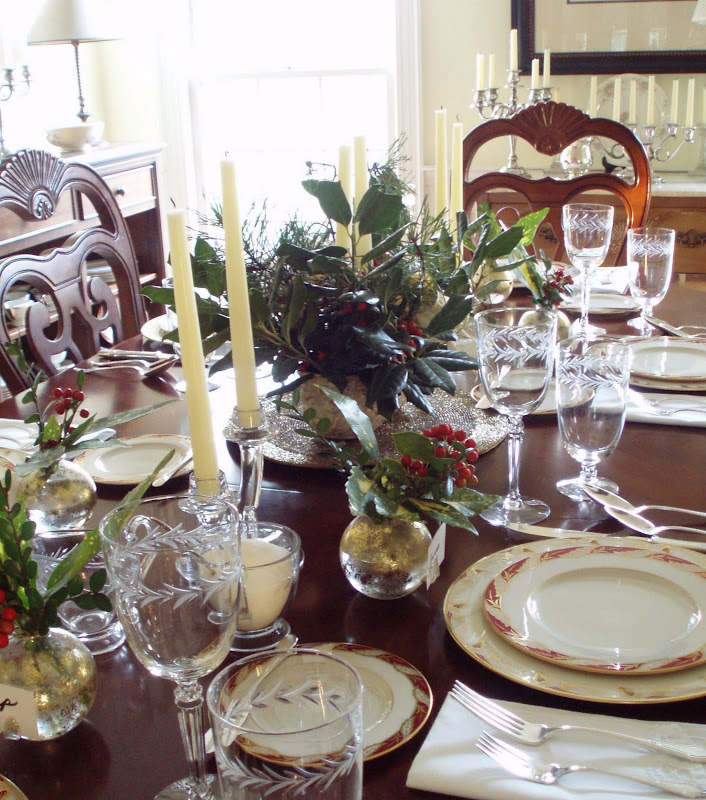 After I finished decorating the tree, I selected the china and crystal. I decided to use salad plates, bread plates, cups, and saucers in the Bellevue pattern by Lenox (1939-1975). I thought the bright maroon and shiny gold leaf pattern had a festive, holiday look. I recently found 49 pieces of Bellevue at an antique mall. It was all in mint condition. I was able to negotiate the price down to around $50. Lenox china for Dollar Tree prices! Not a bad deal, was it?

The crystal pattern is Holly (1942-1980) by Fostoria. I've been collecting it for a couple of years now. Some of it has come from local estate sales; the rest was found on eBay. I carefully hand-washed all the pieces I planned to use, and polished the silver. 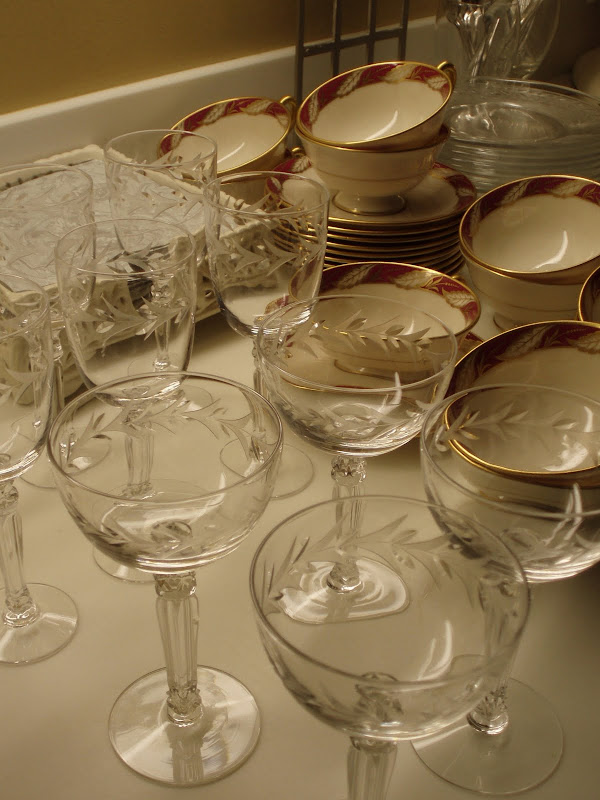 I decided to do a mix-and-match look with three Lenox patterns. The soup bowls are Monroe (1983-2003), from the Presidential series. It's a more contemporary pattern than Bellevue, but still has the cream body and maroon/gold coloration. The crystal compote from last week's table was used on the kitchen island as a serving dish for an appetizer. 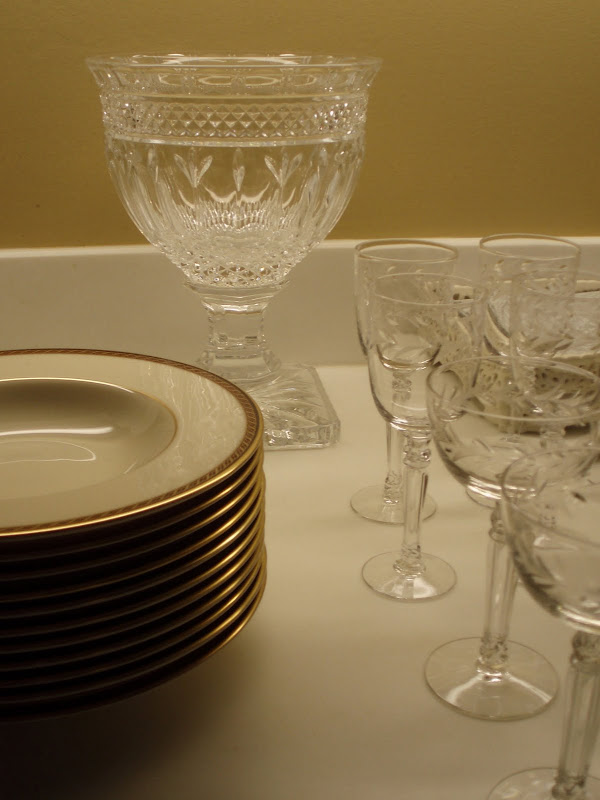 A closer look at the pattern of the rimmed soup bowls. 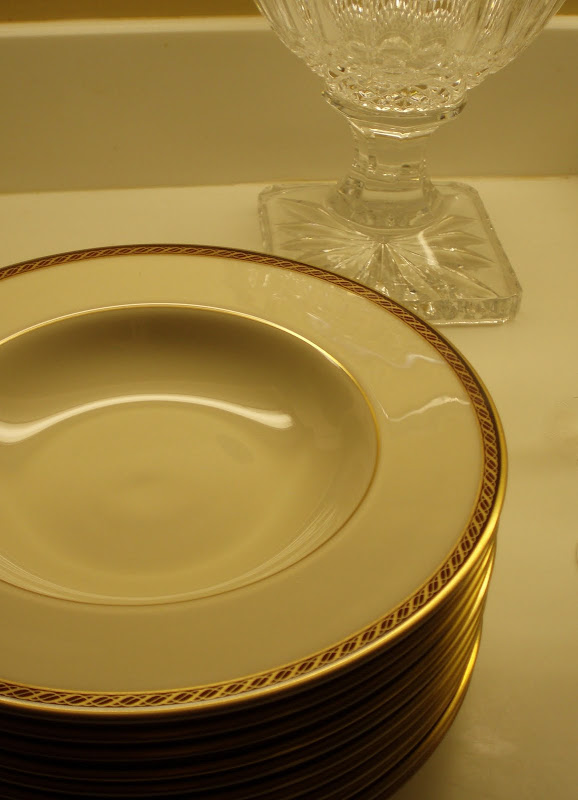 The Holly plates were ready, along with vintage forks and demitasse spoons for after-dinner dessert and coffee. I used my new (well, new to me, from an estate sale) KitchenAid mixer when I made the cake. This cream-colored one was around $60 on day two of the sale. I also have a classic white one I bought for $8 at a local charity thrift store. Both just needed a good (exterior) cleaning and work perfectly. 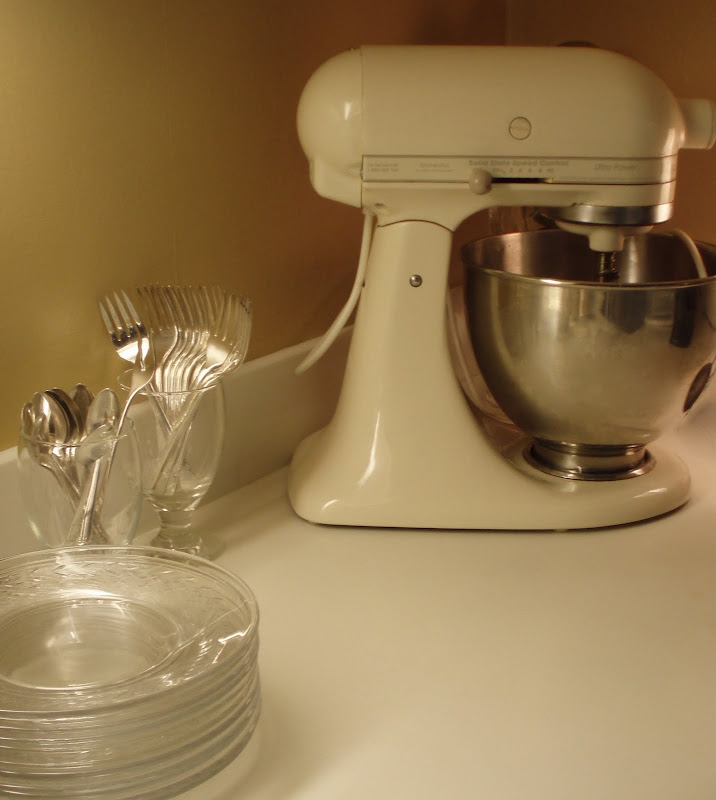 Here's the finished lemon curd pound cake. What a mess! If you want to see how it's supposed to look, visit Martha at Lines from Linderhof, HERE. I used a new bundt pan, sprayed/floured as usual, baked the cake, tested for doneness, and allowed it to cool (long enough, but not too long).

Then I bumped the sides of the pan, shook it slightly, and was ready to flip it onto the Holly cake plate. But ... when I shook it, nothing moved. It was STUCK. I tried carefully separating the edges of the cake from the pan, but it only helped a little. Finally I just went for it. Two-thirds of the cake landed on the plate. The rest remained in the pan. What to do? Make a trifle?

I managed to get most of it out. Hoping to avoid toothpicks during the re-construction, I just pressed it back together and hoped all the butter in the recipe would act as "glue" while it finished cooling. I drizzled the lemon curd topping here and there and less-than-artfully stuck bits of rosemary and cranberries along the "fault lines."

The cranberries were not intended to have popped open. I turned my back for a second (or maybe several seconds), and they started boiling away in their sugar/water bath. Again, go to Linderhof and see how it's supposed to be done! The good news is that the guests loved the cake, asking for the recipe and taking extra slices home (supposedly for spouses!). There was a little of it left. I put it in the refrigerator, and it was even moister the next day. 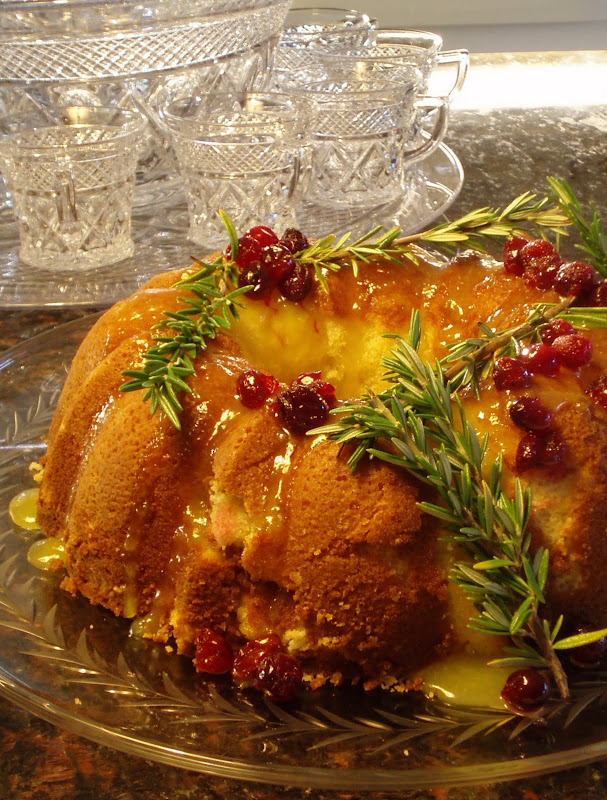 The salad is ready, and the cheddar broccoli soup is almost done. I combined elements of recipes by Martha Stewart and Emeril, reduced the sodium content, and made approximately half again the amount (to end up with enough soup to serve ten). David made the salad with baby spinach, grated parmesan cheese, and English walnuts. The dressing's extra-virgin olive oil and rice vinegar.

A vintage Hazel-Atlas Colonial Swirl punch bowl was just about the right size to hold the salad. Hazel-Atlas was an American glass company. During the 1930s, their factories produced huge quantities of depression glass pieces. At that time, they were the largest glassware manufacturer in the world. 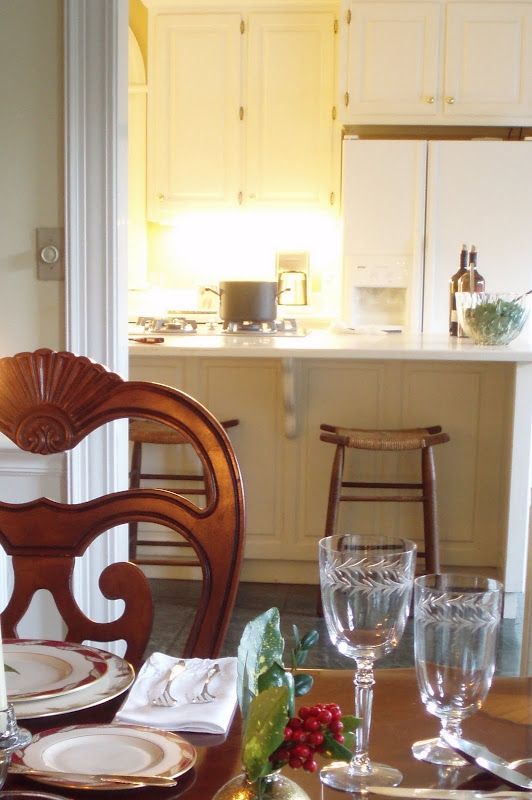 You've seen the dinner plates before. They're Lenox Essex Maroon (1938-1978). The pattern incorporates design elements that are very similar to its "cousin," Bellevue. The place card holders also serve as small vases. Purchased at a recent estate sale (around fifty cents each), they remind me of Christmas ornaments. 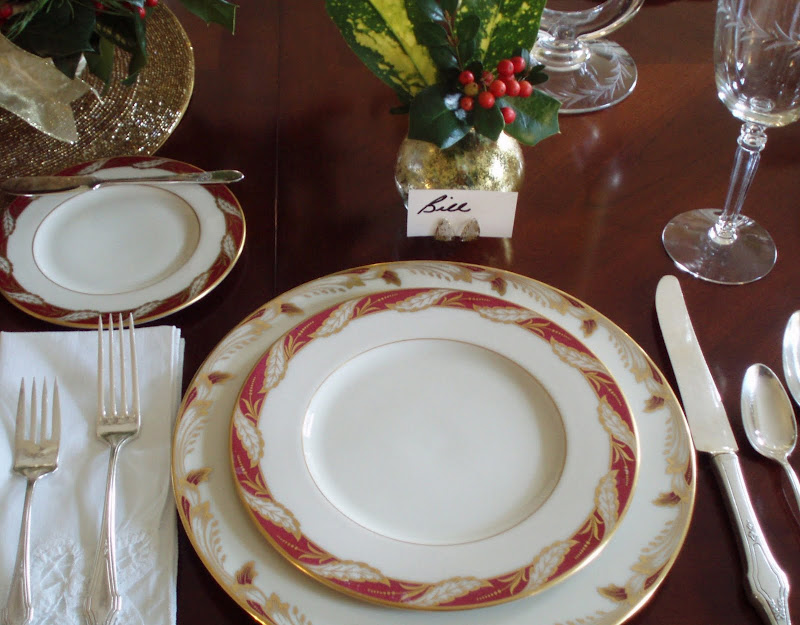 Looking past the table toward the finished tree. Keep in mind that I haven't wrapped presents yet ... so nothing's under the tree. Are you getting the idea that I enjoy the excitement of the last minute holiday rush??? 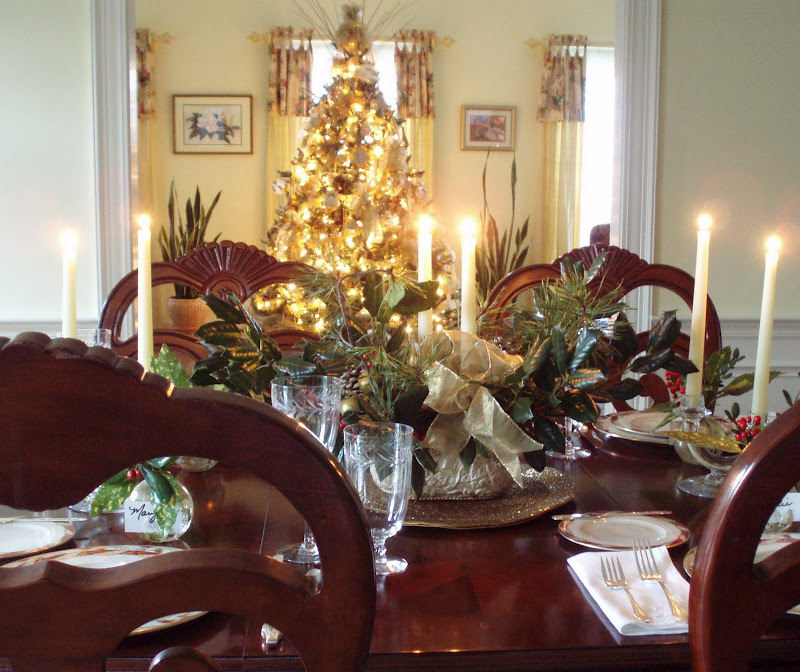 I made the centerpiece quickly using evergreens from the yard/garden. I used a container from Goodwill (99 cents) and placed the cuttings in oasis I had soaked in water. I used wired gold ribbon for bows and added a few picks with gold ornaments and flocked pinecones. An arrangement like this should easily last a week or two. 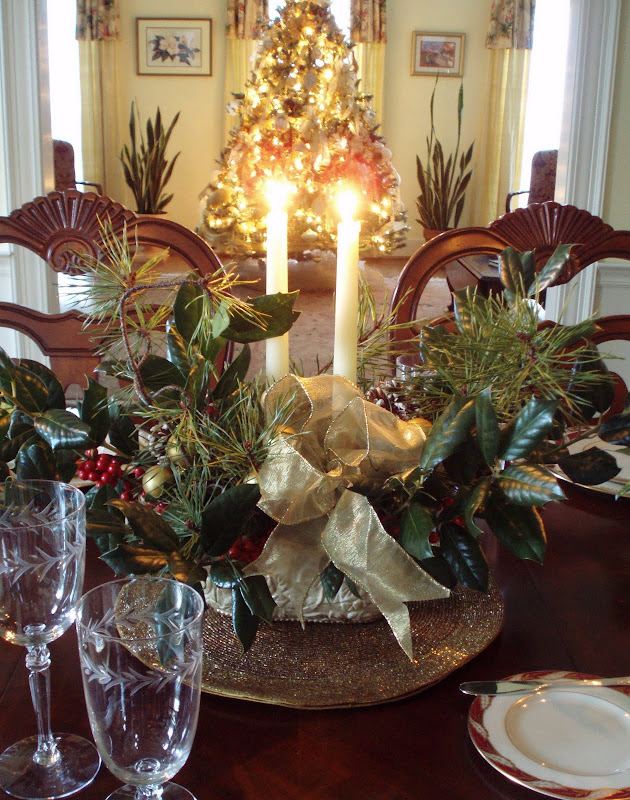 Here's a closer view of the Holly pattern. Some people use theirs only during the holidays, but I enjoy it year round. It's such a stylized pattern that I don't view it as representing holly. It's basically a laurel design. All the major glass companies seemed to produce a laurel variation during the Deco period. Fostoria's Holly includes an alternating cutting and etching, which I think adds interest and beauty. 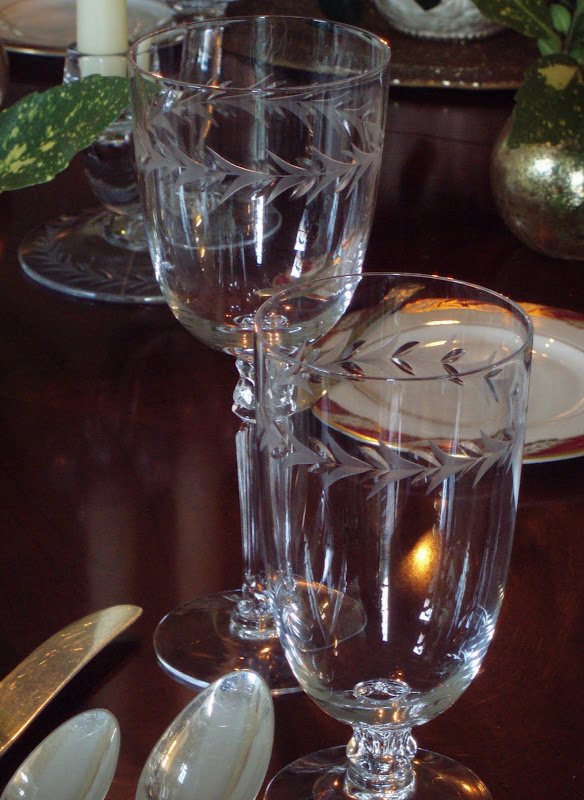 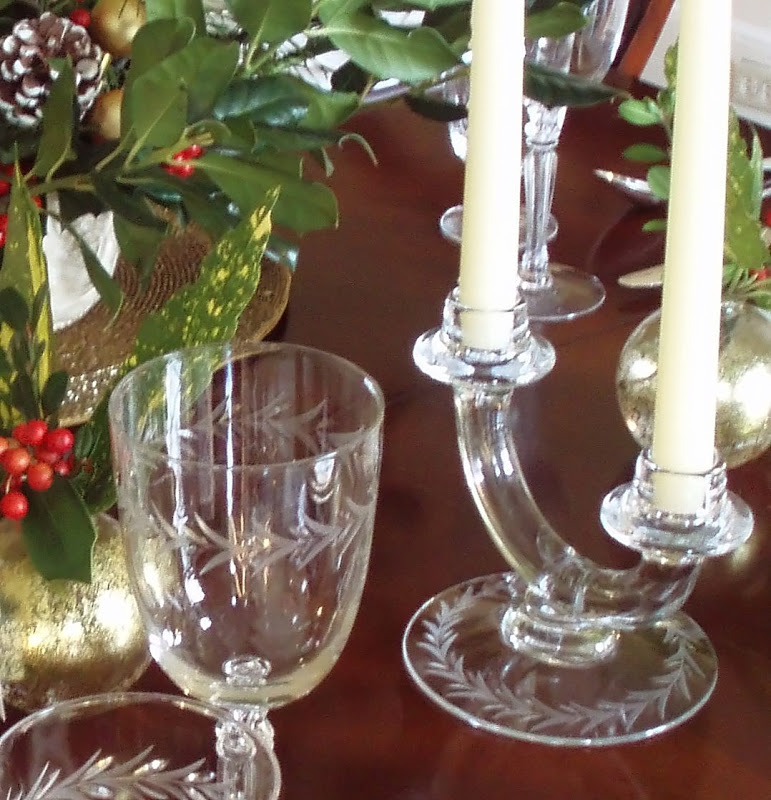 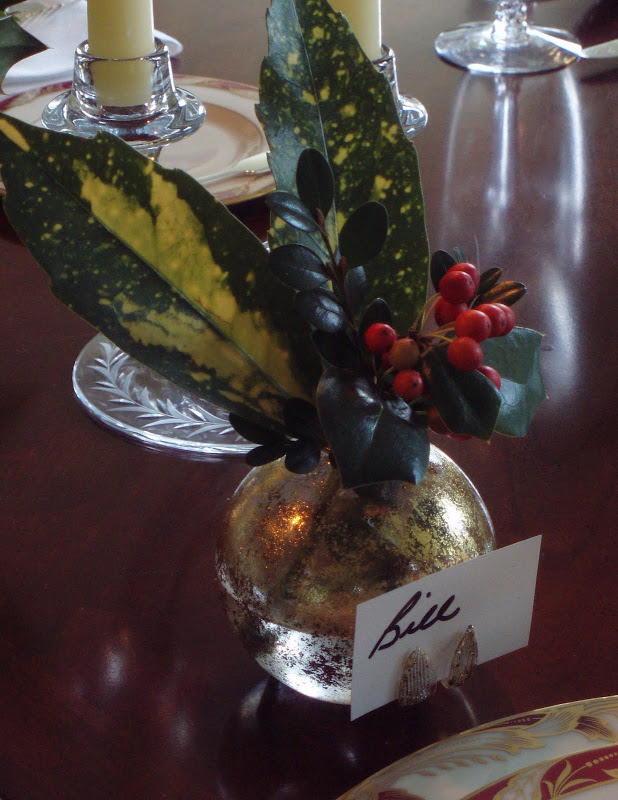 A closer view of the china patterns. 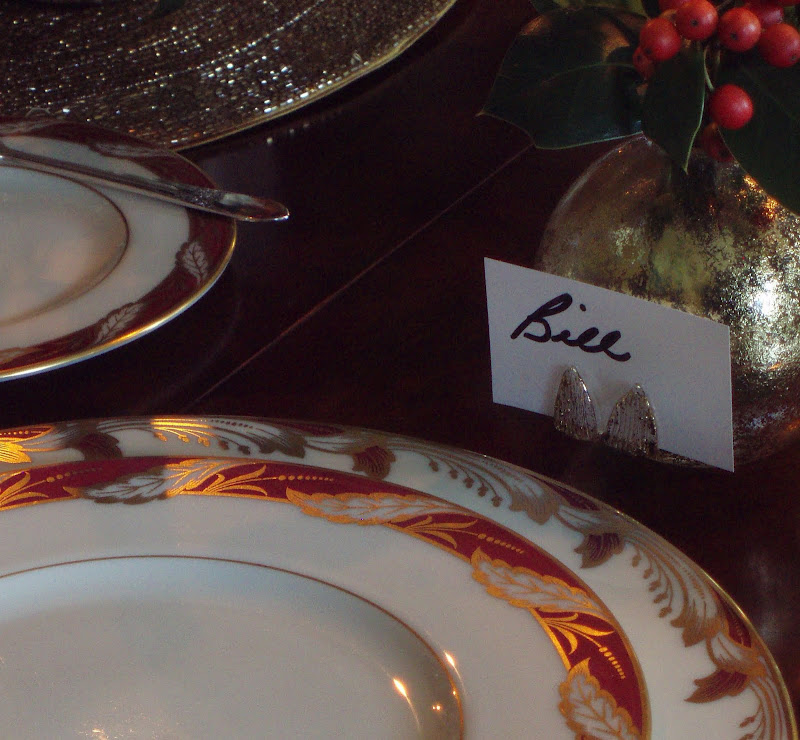 The alternating red and green glass above the front door gives a feeling of Chrismas all year round! 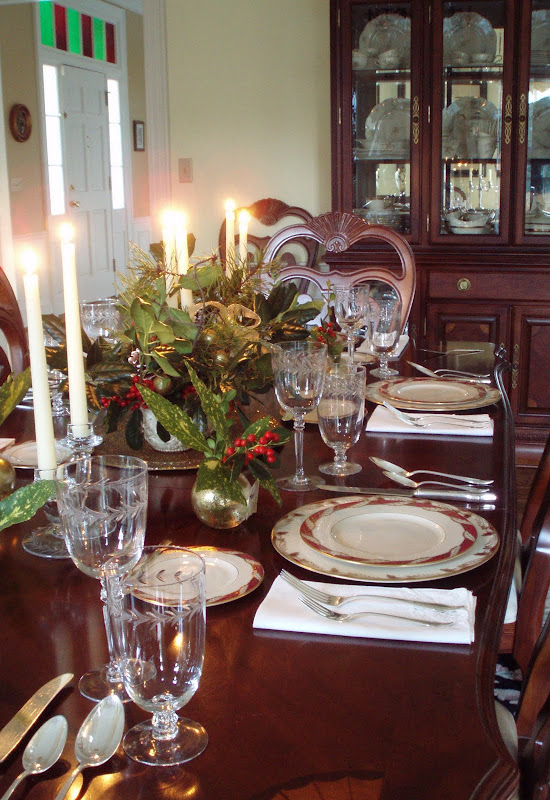 The table for four in the breakfast nook. It was jokingly referred to as the "children's table" by the adults seated there. Based on the laughter emanating from there during dinner, I'd say the children played well together! The small arrangement contains just boxwood, holly, and a candle (all in floral oasis). The single candleholders are also Holly. The flatware on both tables is Jamestown (1916) a silverplated pattern by International. Notice the shape of the knife blades and the fact that they're plated rather than stainless. Most flatware (whether stainless, sterling, or plated), has featured stainless knife blades since the 1920s. 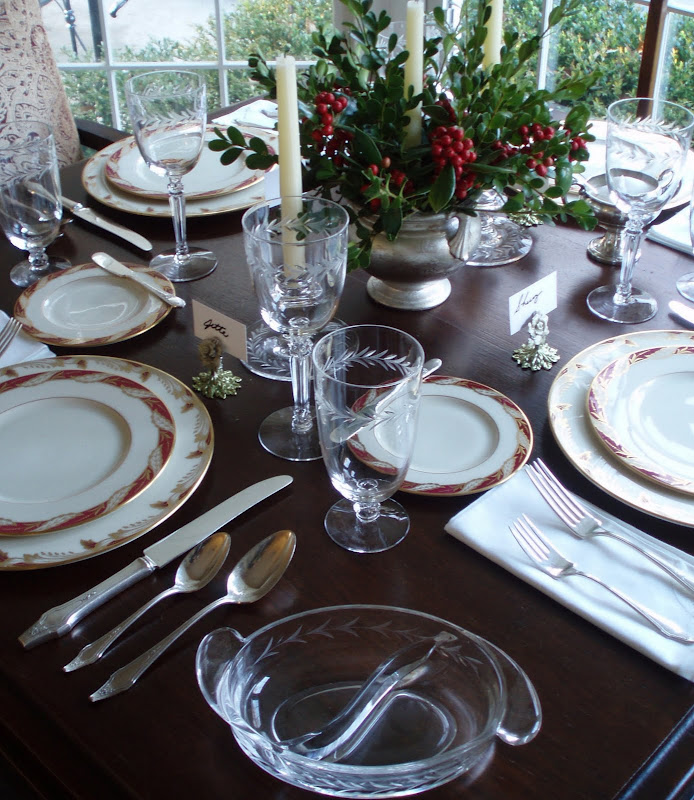 The wreath is artificial, but I attached cuttings from the Virginia pine tree. I also simplified it by removing several artificial burgundy-colored poinsettias, red berries, and little packages. I left (and reshaped) the wired gold ribbon. The black metal urns contained kimberly ferns that just finally "went South" a week or so ago. I quickly stuck pine branches (with cones) into the ferns to create a more welcoming look for guests. Looking at the photograph, I see that they're not particularly symmetrical ... still probably better than dead ferns ... don't you agree? 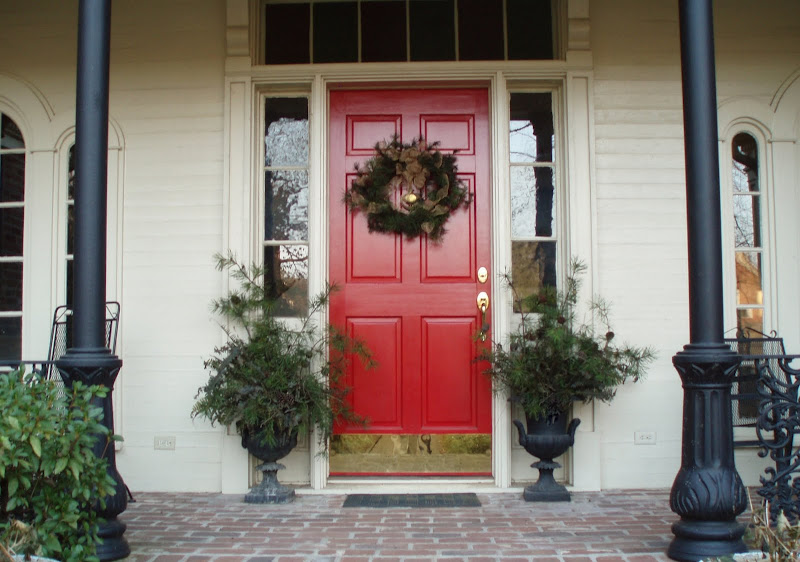 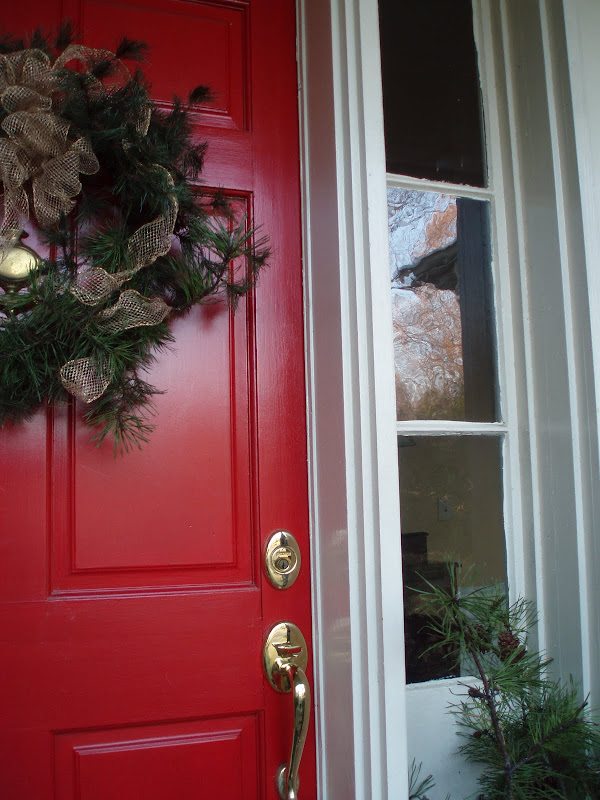 Again quickly, I draped artificial garland across the mantel, added a string of bell-shaped clear lights, and inserted pine cuttings. I think next year, I'll use a longer garland that reaches the floor on each side. 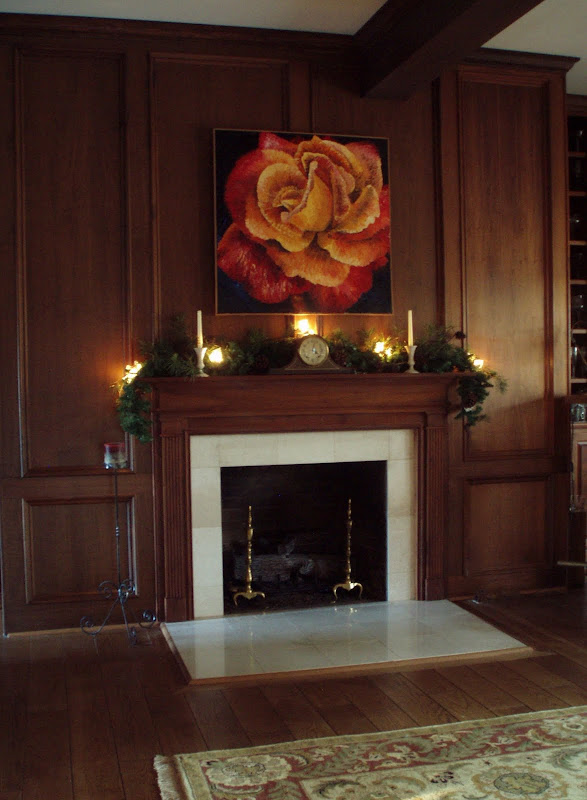 Our sweet neighbors gave us this beautiful flocked (living) poinsettia. It's surprising how adding just one plant can give an entire room a holiday feeling, isn't it? 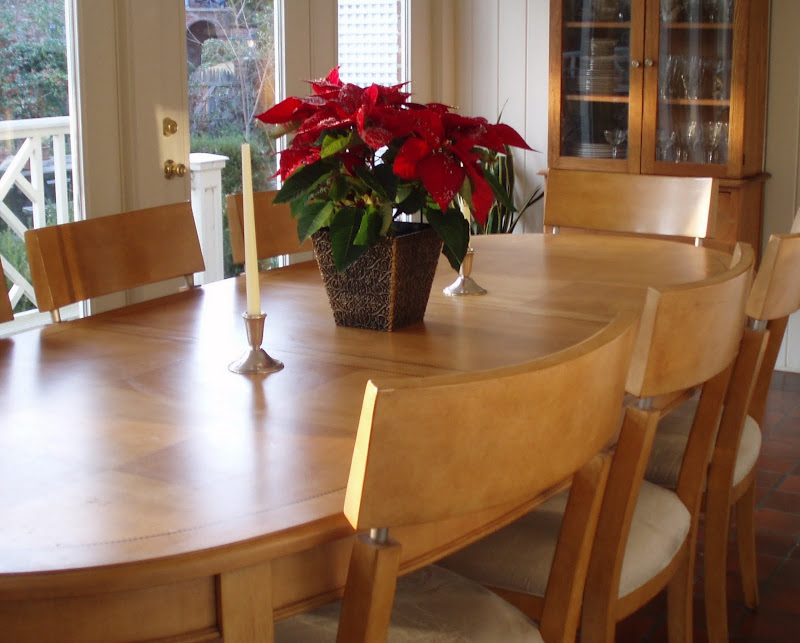 Here's a view of the tree in the sitting room from the entry hall. 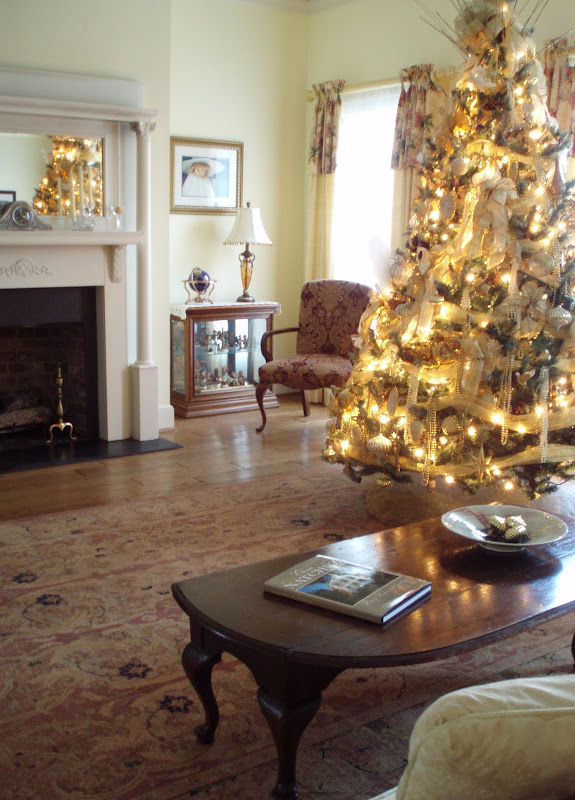 The tree, wired ribbon, and most of the ornaments came from Hobby Lobby's after-Christmas sale several years ago. The sticks at the top came from there too. I spray painted them gold. It's starting to peel off, and I like the look better now than when they were freshly done. Wrapped presents coming soon ... very soon! 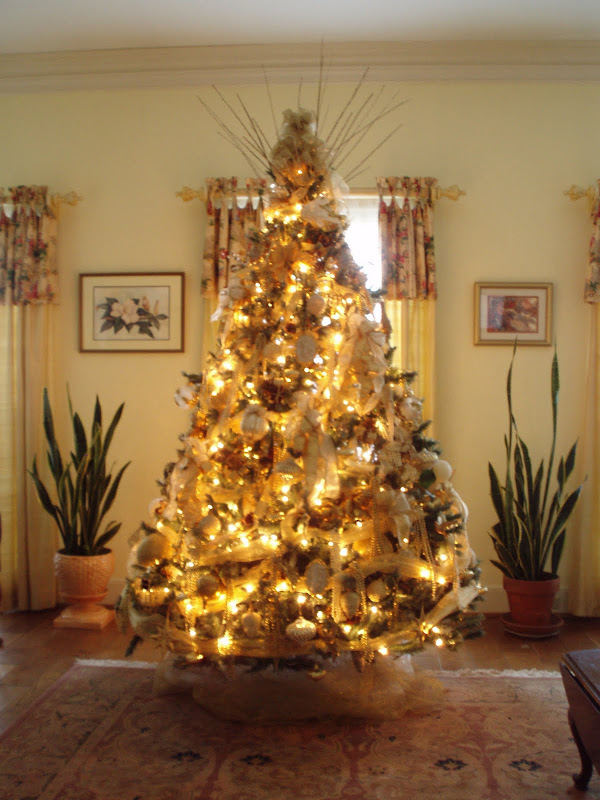 If you're interested, here's how I made the soup:
5 cups unsalted chicken broth (in a carton on the soup aisle of the supermarket)
1 large yellow onion, chopped
4 1/2 tablespoons butter
3 tablespoons flour
1 pound shredded cheddar cheese
1 pound package frozen chopped broccoli (or one head fresh)
black pepper to taste
1/4 cup half-and-half (optional) stirred in just before serving

Melt butter in pan. Stir in chopped onion and cook until translucent. Stir flour into broth and heat. Add onions to broth and simmer about ten minutes. Add broccoli. Cooking time will depend on whether or not broccoli is frozen. I let it thaw first and cooked until it was crisp/tender (about ten more minutes). Add pepper to taste.

Next, pour soup into blender or food processer. I did it in two batches in a blender. I blended it very briefly. Most recipes suggest blending it thoroughly and putting it through a sieve to remove all solids. You can do that if you like, but I prefer the soup to maintain its body and texture.

Return blended soup to pan and simmer while stirring in cheese. You can whisk in a splash or two of cream (or half-and-half) at the end if you like. Some recipes call for garlic and/or nutmeg, but I decided not to include either.

If you try the recipe, let me know what you think.
It's almost time for Tablescape Thursday with our charming hostess, Susan of Between Naps on the Porch. I'll be traveling, but I'll try to link to this always-fun weekly event. Thank you, Susan, for your friendship and your warm Southern hospitality!
I hope you all have a wonderful Christmas and a very Happy New Year!