It's time for Foodie Friday with Gollum! Check out all the great foodie posts HERE.

I haven't joined in lately (too busy tablescaping, shopping, Christmas-ing, and ... squeezing in a full-time career here and there). If you're interested in tablescapes, you can see my latest "And a Hummel New Year" HERE.

Today I thought I'd share a great (I think) way to use leftover turkey from holiday meals. I don't mind leftovers at all ... I enjoy sliced turkey sandwiches, turkey salad, etc. When I was a child, I remember my mother concocting a version of turkey soup that we all liked. Since it began with boiling what was left of the bird after it had been carved, she dubbed it "Turkey Carcass Soup" (OK, her sense of humor WAS a little twisted at times). I recall her saying how amazing it was how much meat came off the almost-bare bones when they were boiled.

I decided to give it a try with my Christmas turkey's ... well ... the carcass. It was true about how much meat appeared (and you can always add more leftover turkey if you like your soup extra hearty). I did a variation of the famous Doodle Soup that's celebrated with a festival every year in the West Tennessee town of Bradford. That's doodle as in "cock-a-doodle-doo."

Here's a quote from http://administration.collegepublisher.com/media/paper1175/documents/hw3jj90e.pdf:

"If you drive by Bradford in September, you will more than likely see a sign proclaiming
this small West Tennessee town to be the “Doodle Soup Capital of the World.” At the
end of September the residents of Bradford come together for a weekend of festivities
including a quilt show, baby crawling contest, street dance, and, of course, a Doodle
Soup supper. No one really knows the origin of Doodle Soup, and there are nearly as
many different recipes for it as there are residents in Bradford. Here is a recipe from
Betty Jo Taylor, a Bradford resident who considered quite the chef by attendees of the
Doodle Soup festivities."

Here's the soup I made: 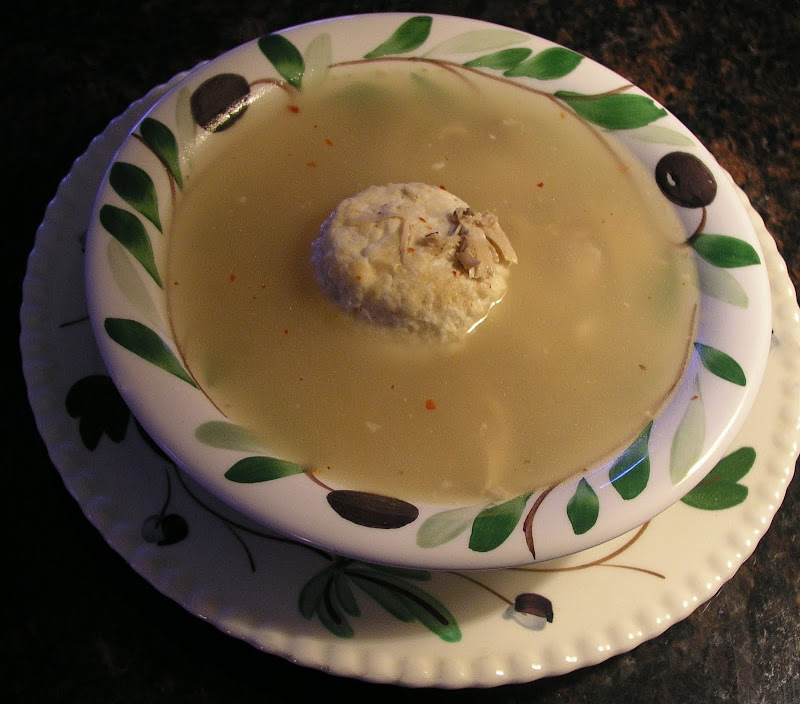 It's traditional to serve the soup over biscuits or crackers. I prefer biscuits. In the picture above, I used leftover ones I'd made (from scratch) for breakfast. I've also used drop biscuits and frozen ones from the supermarket. All seem to work equally well.

I don't include the sugar or the flour called for in Ms. Taylor's recipe. I've made it with fresh red pepper, but dried seems to taste about the same. I always add black pepper to taste. When I've needed to prepare a meal in a hurry, I've made it with a roasted chicken from the deli and added unsalted broth from the supermarket. The overall flavor is vinegary and peppery so, if you like those ingredients, you'll probably enjoy Doodle Soup.

Below are photographs from Doodle Soup Days in Bradford: 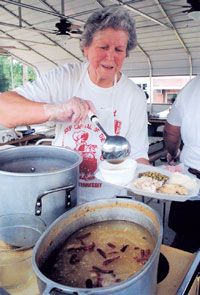 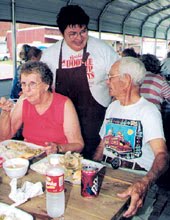 From the Tennessee Department of Tourist Development's website:
Bradford is the "Doodle Soup Capital of the World". No one knows the exact origin of this hot, spicy, savory dish. Some say the recipe was brought to Tennessee more than 150 years ago; others say it originated here. People from the entire area, as well as all parts of the nation, come to Bradford to sample the famous soup.The Bradford Doodle Soup Days are held annually - the third weekend in September.
For information, contact:
Bradford City Hall207 East Main StreetBradford, TN 38316Phone: (731) 742-3465