It was such a beautiful, sunny day that I decided to set a table for two on the deck. I was in the mood to keep it simple. I quickly assembled an unstructured arrangement of fresh garden flowers (as I did last week and the week before). I also draped a garland of native clematis and old-fashioned pink shrub roses over the railing next to the table.

In keeping with the simple approach I was taking, I left the glass tabletop uncovered and opted not to layer plates -- just a dinner plate and cup & saucer at each place setting. Almost everything I used is vintage and came from various local estate sales.

As I arranged the flowers and set the table, a poem/traditional song by Scottish poet, Robert Burns, kept running through my mind. No, these roses aren't red, but much of what you'll see in the photographs is in the red family. So, here you have: 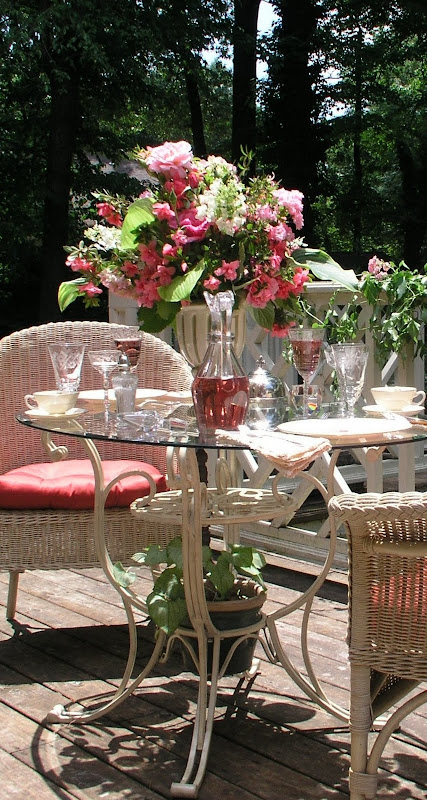 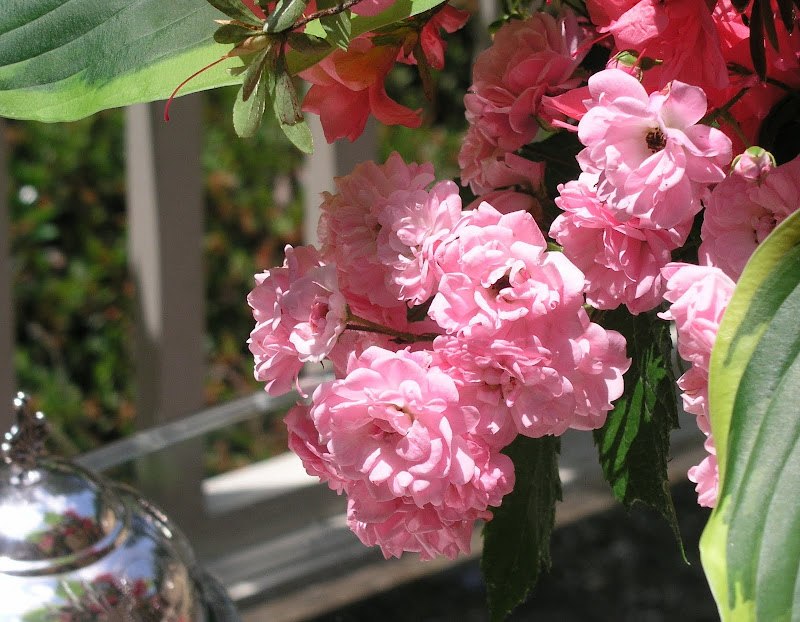 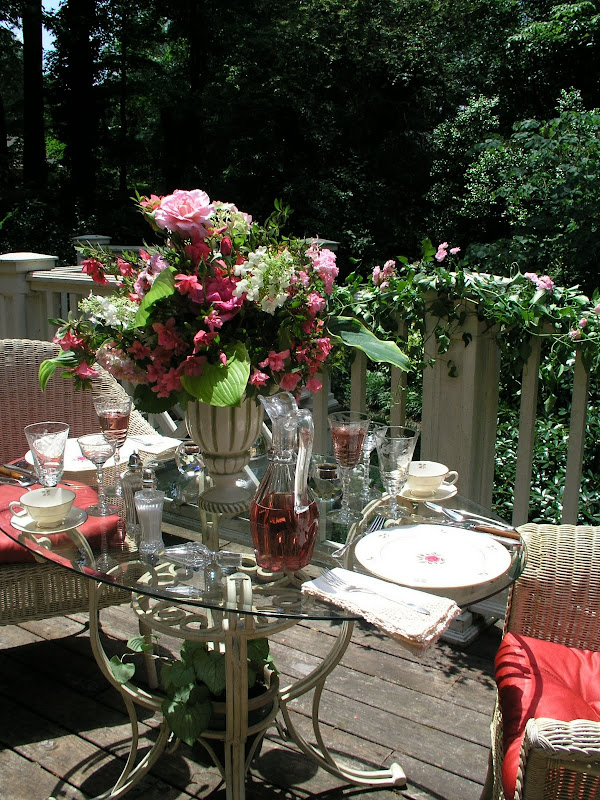 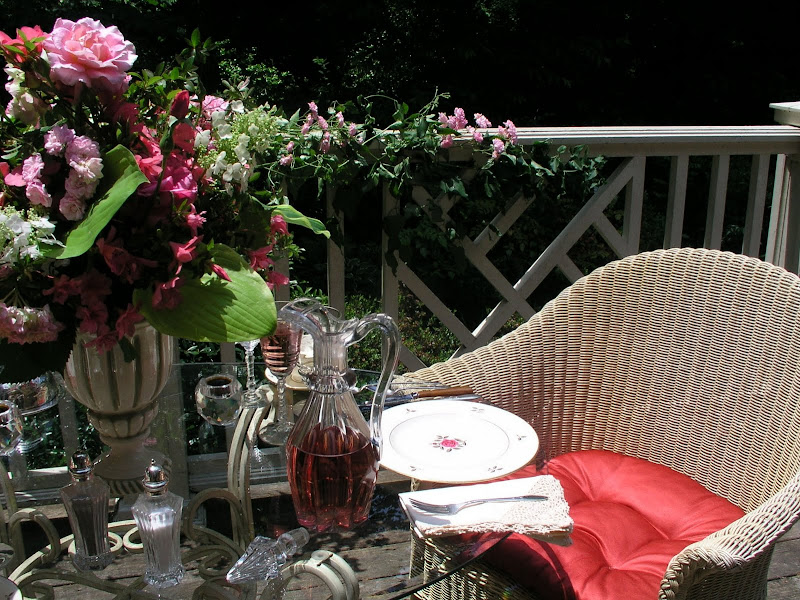 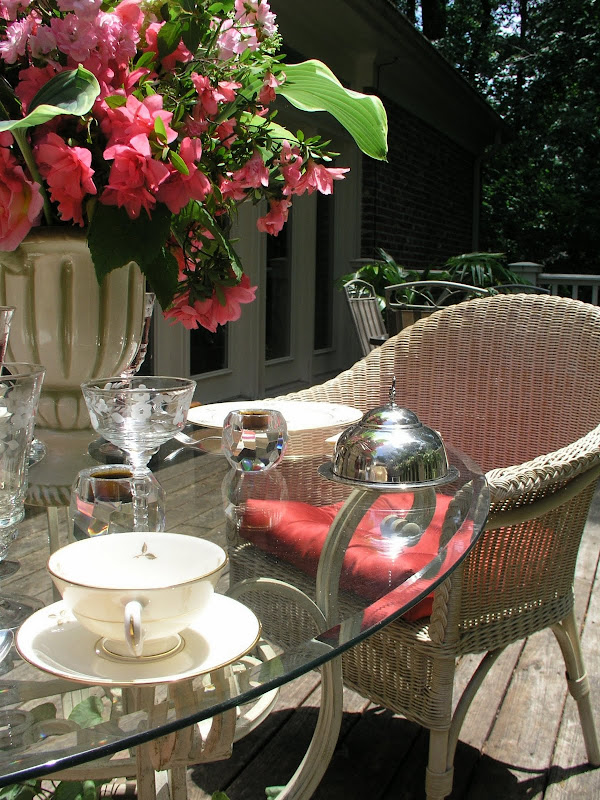 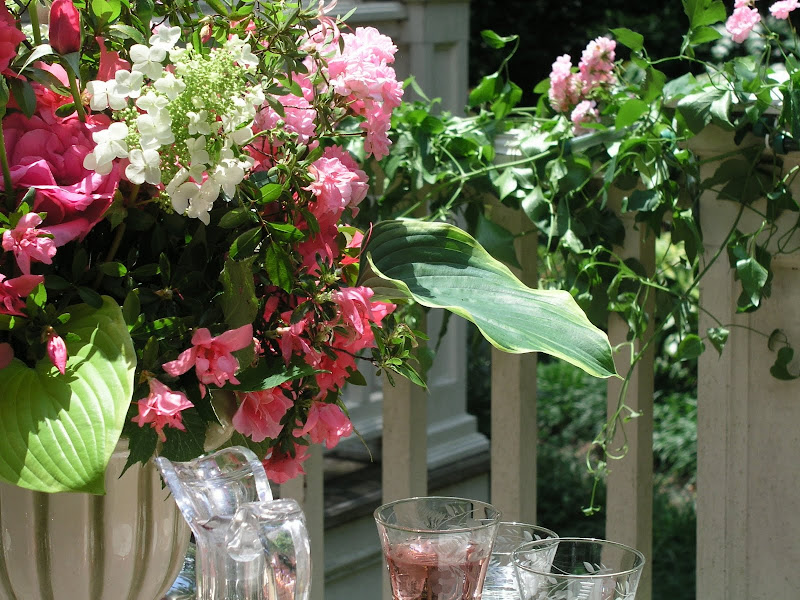 As fair art thou, my bonnie lass, 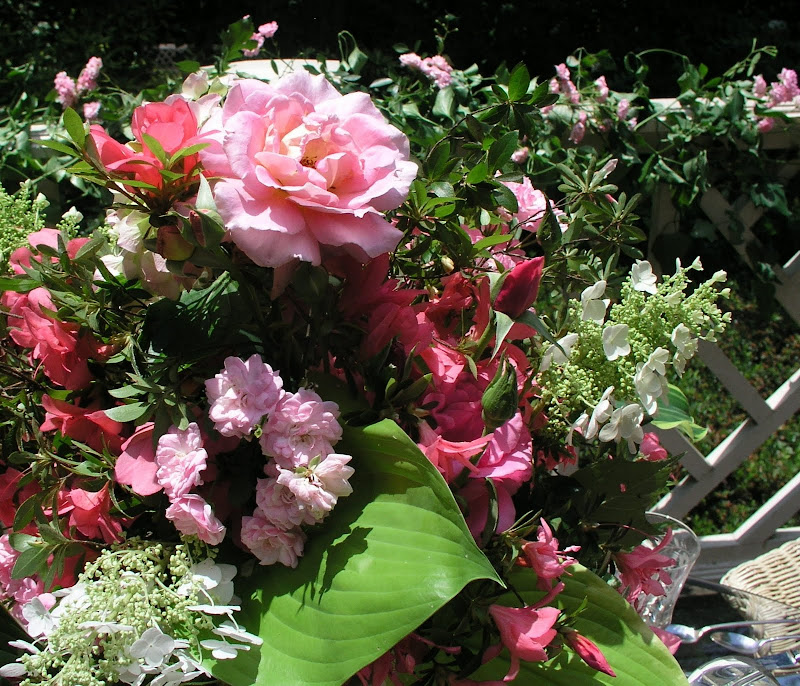 So deep in luve am I: 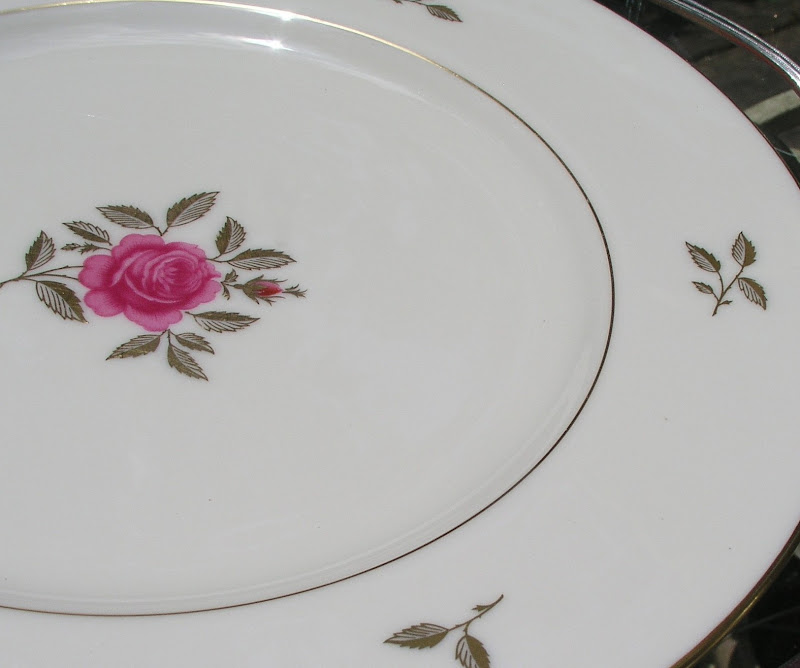 And I will luve thee still, my dear, 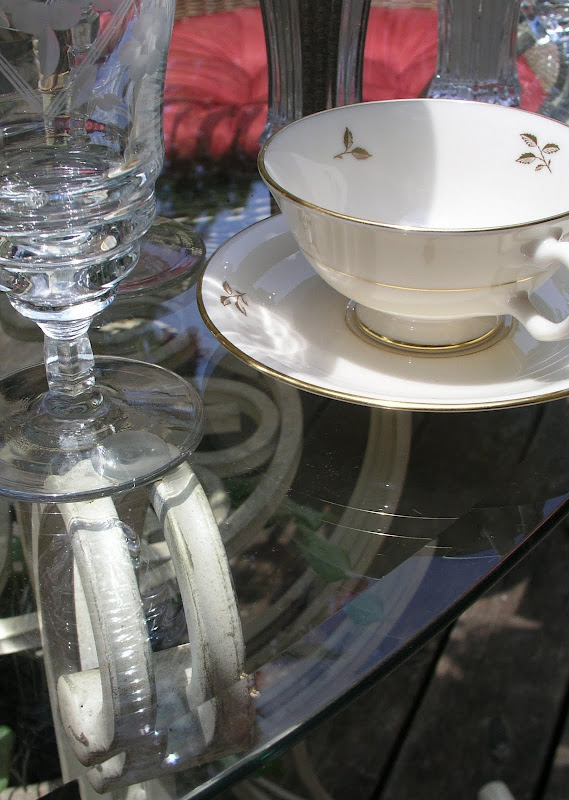 Till a’ the seas gang dry: 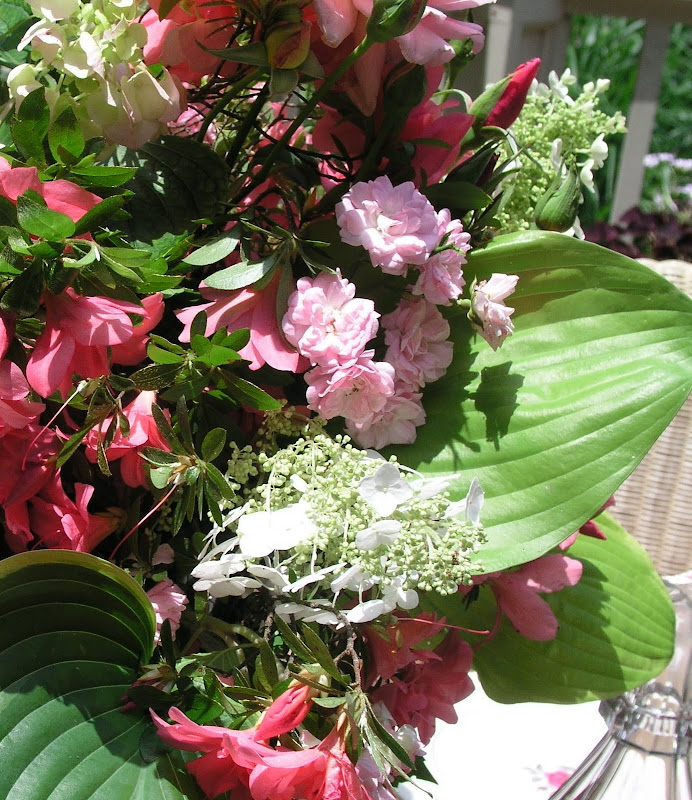 Till a’ the seas gang dry, my dear, 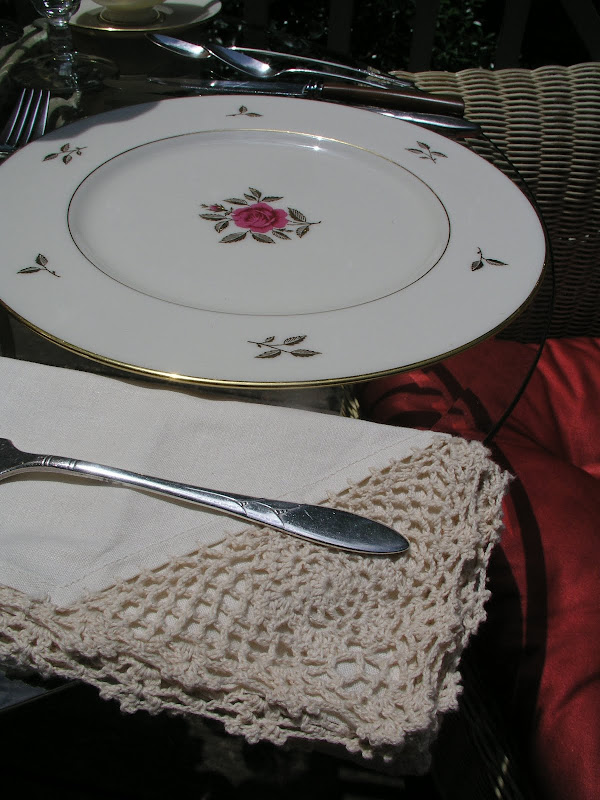 And the rocks melt wi’ the sun: 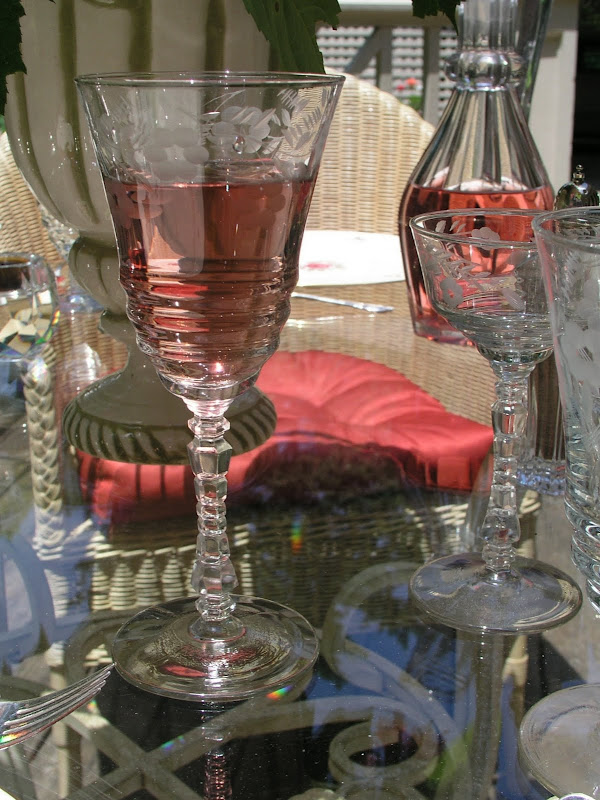 I will luve thee still, my dear, 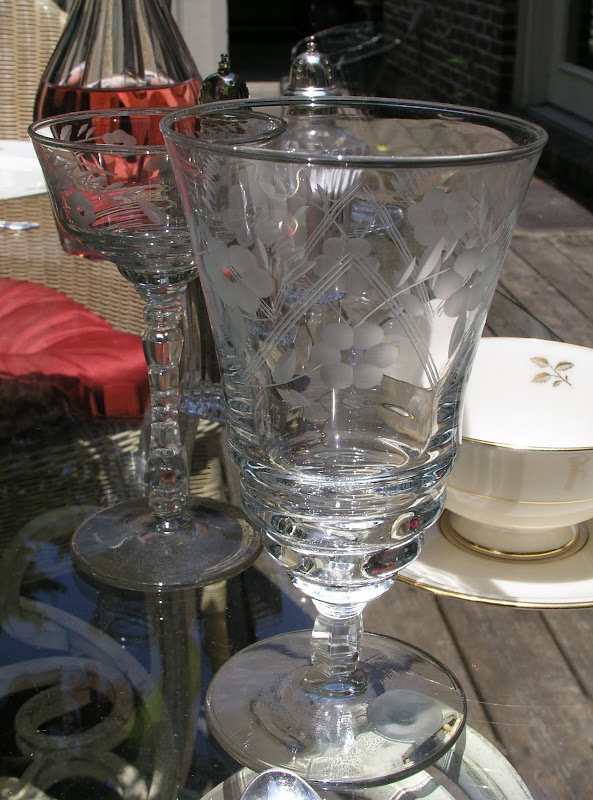 While the sands o’ life shall run. 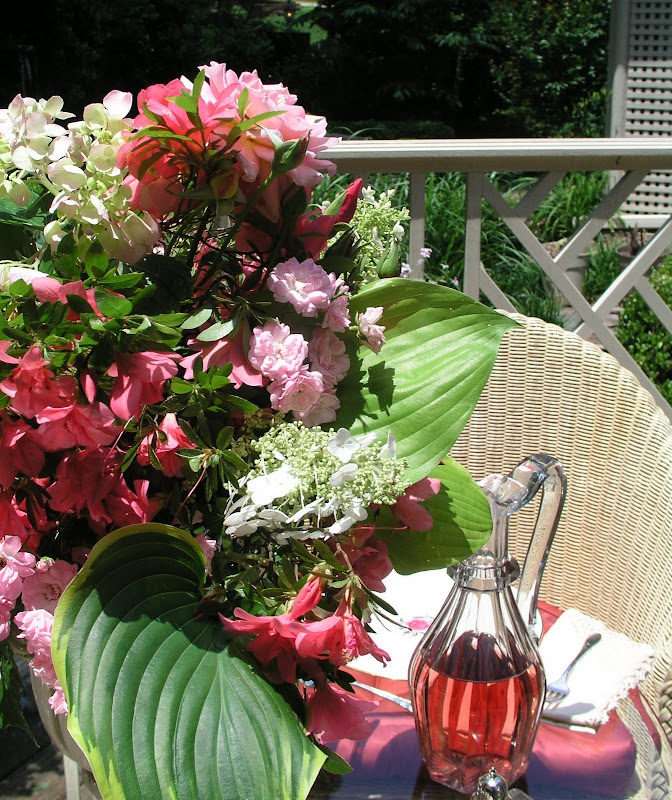 And fare thee weel, my only Luve 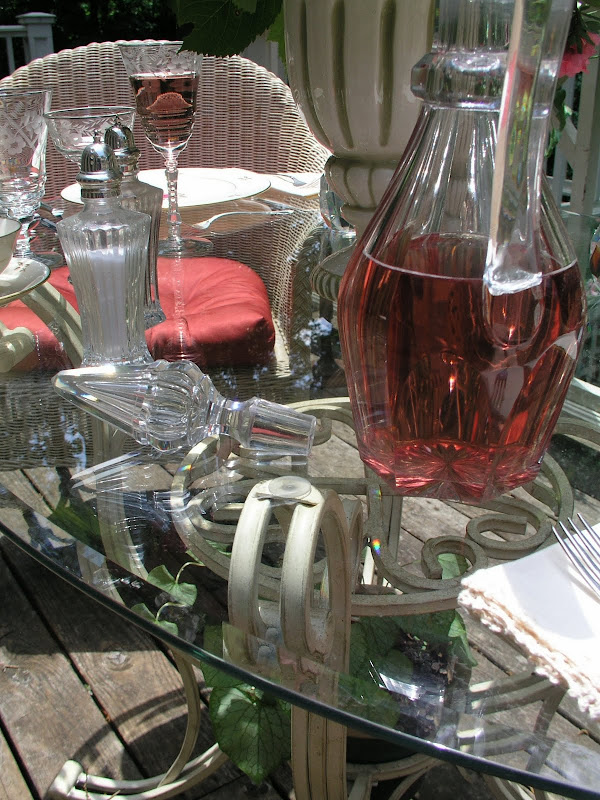 And fare thee weel, a while! 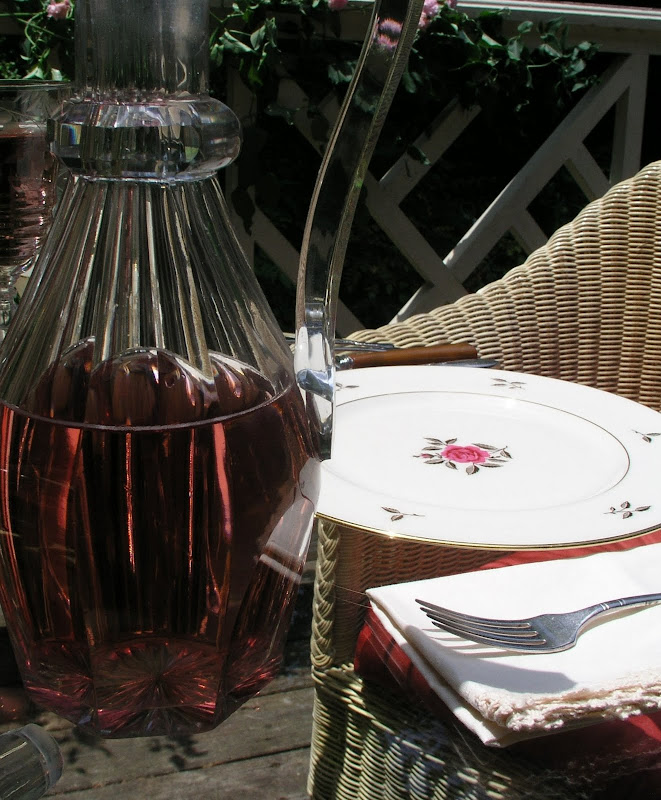 And I will come again, my Luve, 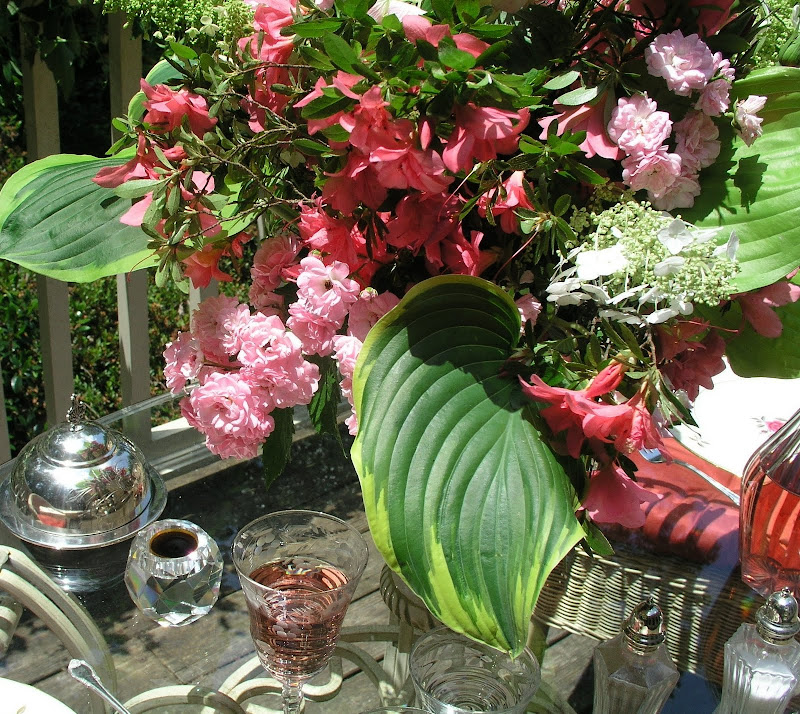 Tho’ it were ten thousand mile. 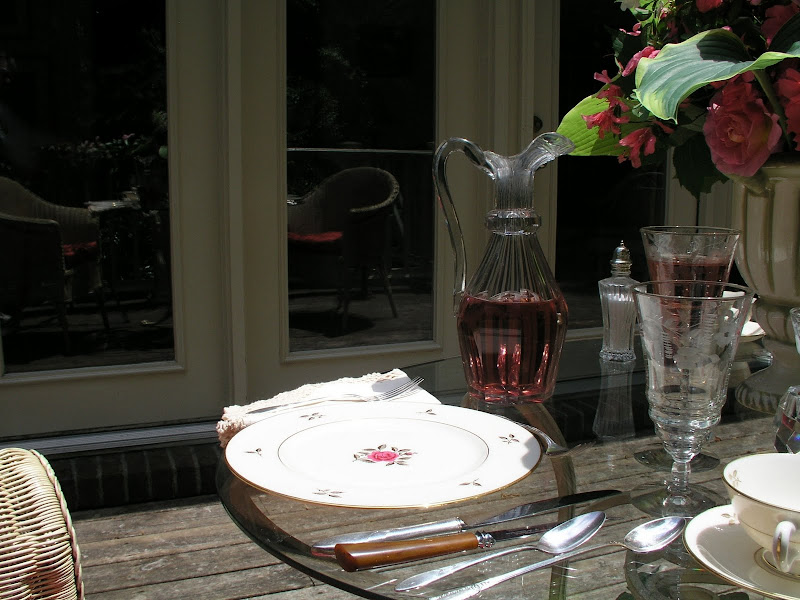 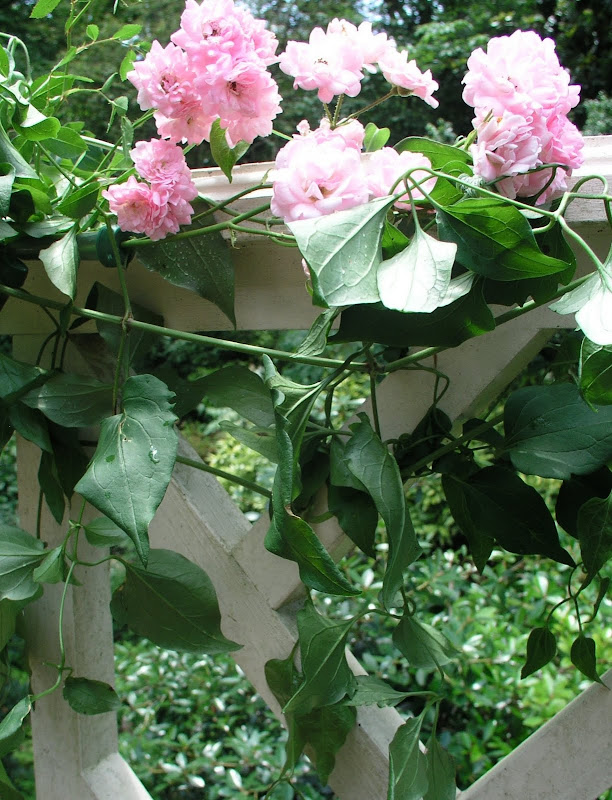 When asked for the source of his greatest creative inspiration, singer songwriter Bob Dylan selected A Red, Red Rose, as the lyrics that have had the biggest effect on his life.

I really enjoy using these Rock Sharpe glasses! They have a formal look, and guests frequently comment on their beauty. Fortunately, they're far more durable than their appearance would indicate. Prices vary, but they can often be found at estate sales and on eBay for little more than the price of basic, mass-produced everyday glasses.

Are you up for a little tabletop history lesson?
From http://www.baharris.org/:

This is called Libbey Rock Sharpe because it is a Libbey Glass Company's blank (Stem line # 3005) which Cataract-Sharpe Company used for their cuttings (Pattern Cut 3005-5) in their Rock Sharpe line. Cataract- Sharpe Company purchased blanks from Libbey for their fine cuttings. This stem was made during the 1930s - 1940s and has Libbey's chip-resistant "Safedge" feature which Libbey introduced in 1924.

This pattern is featured in Bob Page and Dale Frederiksen's book, "A Collection of American Crystal", pg. 66, 1995. Quoted from this book:The Cataract Company was a high quality cutting operation that decorated fine handmade stemware supplied by other firms. For many years, Cataract-Sharpe had purchased blanks from the Libbey Glass Division of Owens-Illinois and decorated the crystal at its factory in Buffalo. The company made no glass itself. Cataract-Sharpe cut many intricate, deep-cut crystal patterns. Many of the designs were ornately done and brilliantly polished. A fern-like design was a very typical design for Sharpe and it appears in a variety of their cut patterns. In the 30's and 40's, the company widely promoted its Rock Sharpe Crystal products in many of the major women's magazines. Rock Sharpe was some of the best-selling stemware in American during that period.

I hope you'll join Susan of Between Naps on the Porch for Tablescape Thursday. It's always great fun to see Susan's wonderful tables and those of her talented participants!