The KitchenAid K5-A sold for $109 when it was introduced in 1941. At the time, the federal minimum wage was only 40 cents per hour! That information comes from KitchenAid Conversations, a forum for KitchenAid owners, potential owners, and afficianados. It's at
http://forum.kitchenaid.com/forums/

Below is the mixer I found at a local estate sale over the weekend. I wasn't interested at the asking price of $85. I went back the next day, and it was reduced to $50. 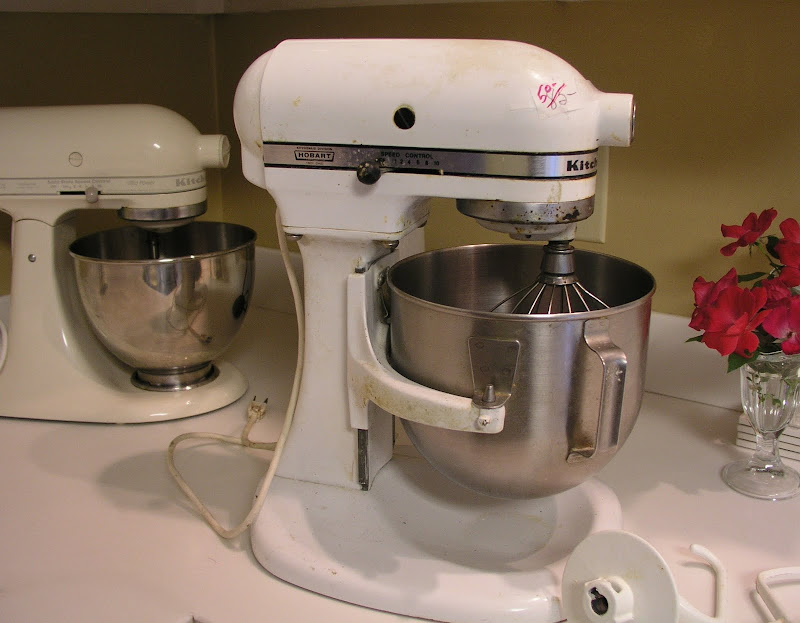 It looked rather forlorn and appeared to have suffered years of neglect. 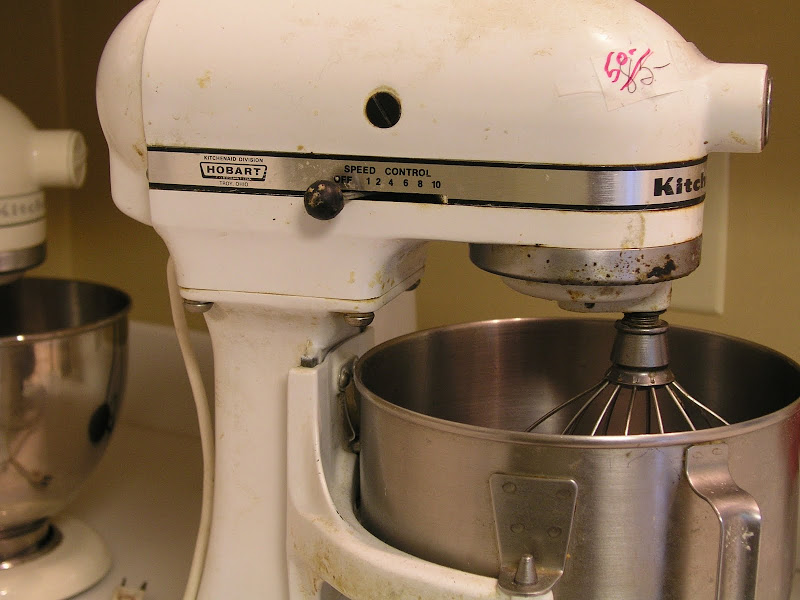 It was unsightly, if not downright unsanitary. 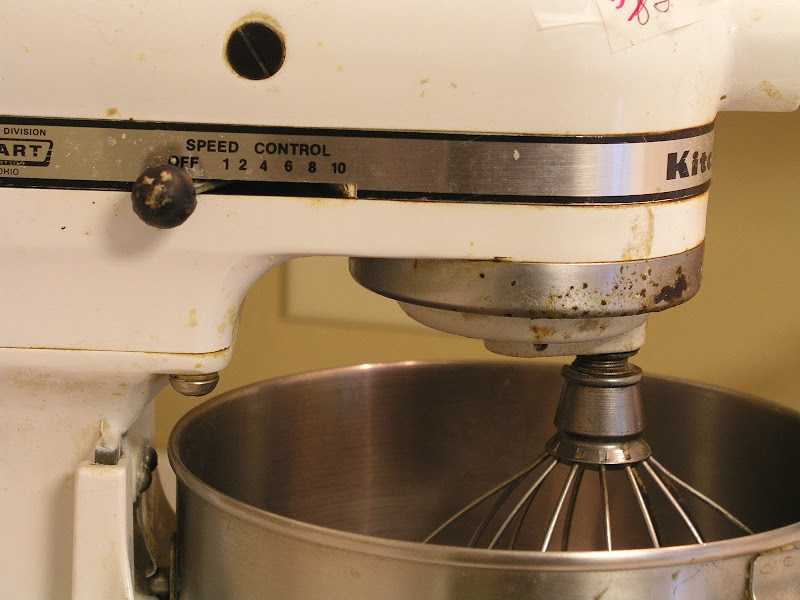 I offered $40, and my bid was accepted. Naturally I had first asked permission to plug it in and make certain it operated as it should. The wire whip attachment was very difficult to attach (due to the layers of built-up grease and grime on the whip, the spring, and the spindle), but I managed. It seemed to work well at every speed, and there were no unexpected sounds (or burning smells!). 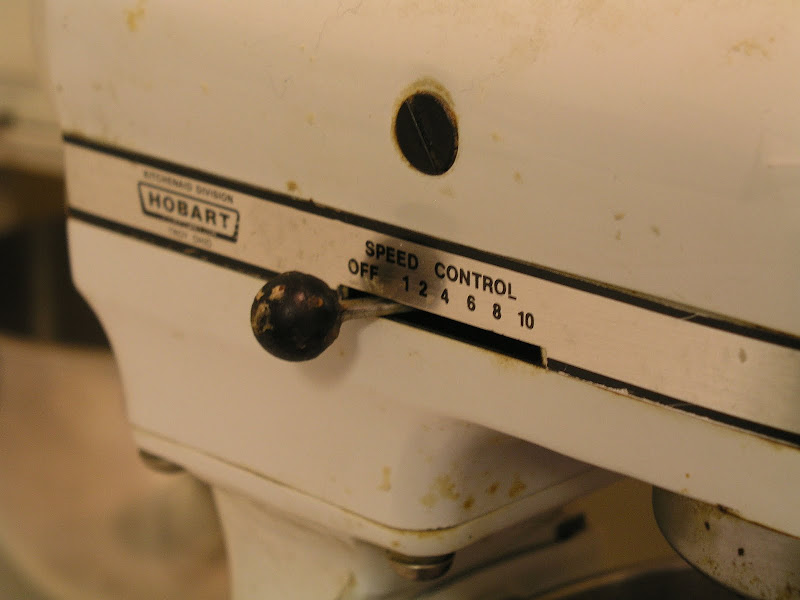 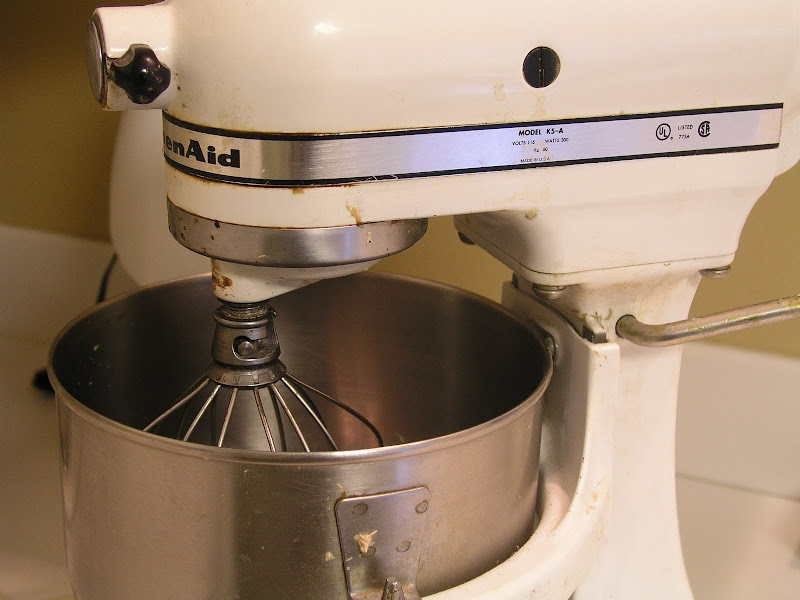 Usually the people doing estate sales clean and polish everything prior to the sale, but this must have appeared too time-consuming to tackle ... 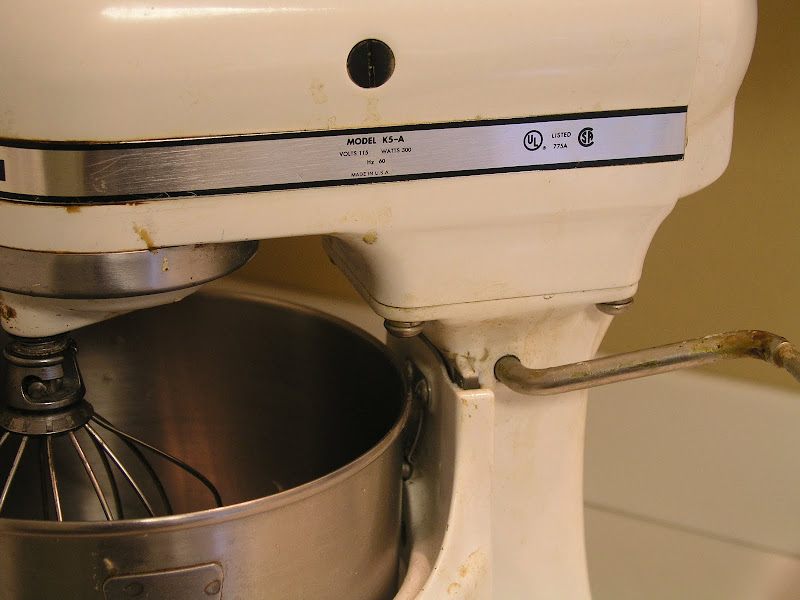 After a few minutes (OK, more like a couple of hours) of scrubbing with Windex, Soft Scrub, and Goo Gone, things were looking better. Here's the result: 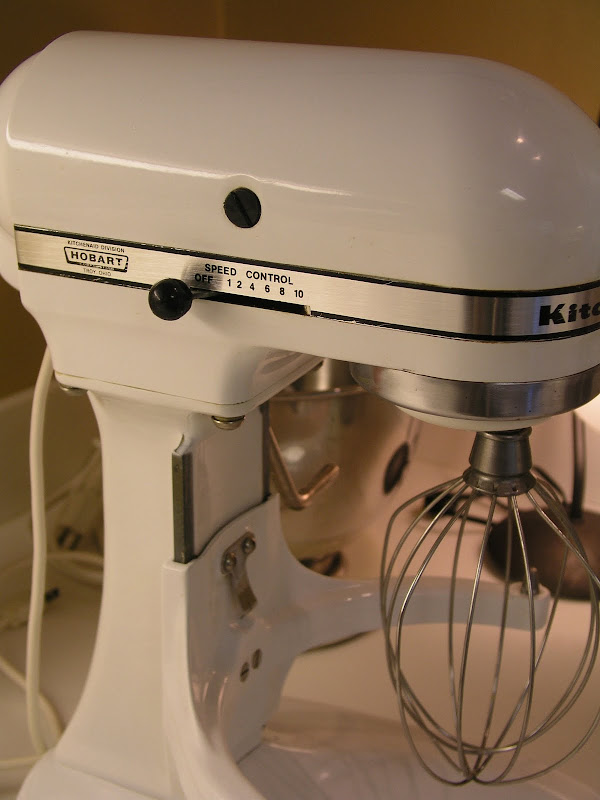 Not perfect of course, but not bad for a decades-old kitchen appliance. It was made by Hobart, producer of KitchenAid mixers until the line was sold to Whirlpool Corporation in 1986. A bit of research tells me this particular mixer was produced in the 1970s. Before the 70s the power cords were gray or brown. After 1977, this model become the K5SS.

I had uneasy moment when I arrived at the sale on the second day. There were two ladies looking at the mixer. One said "Oh look, it's a KitchenAid." The other (who appeared to be in her 70s) replied, "I know, but I don't need it. I'm still using Mother's old KitchenAid." 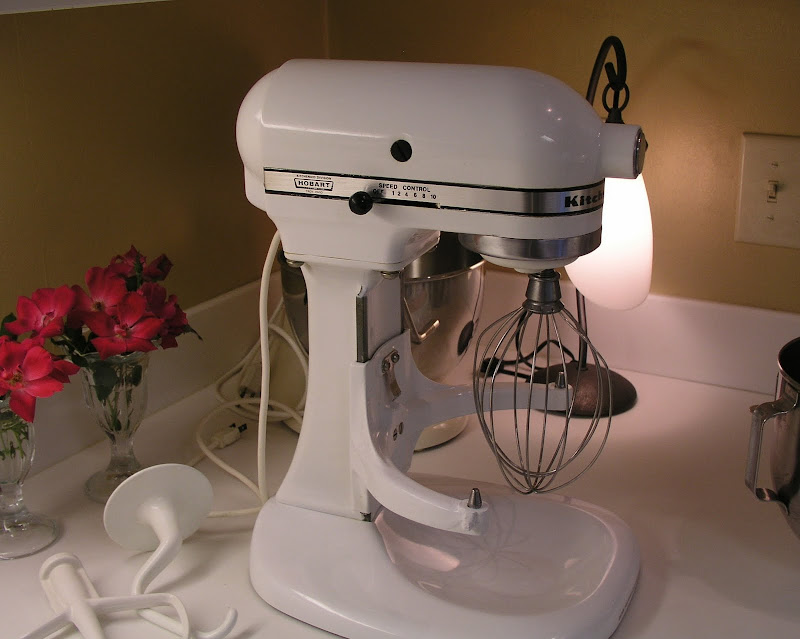 I made it shine with a small amount of furniture polish applied with a soft cloth. 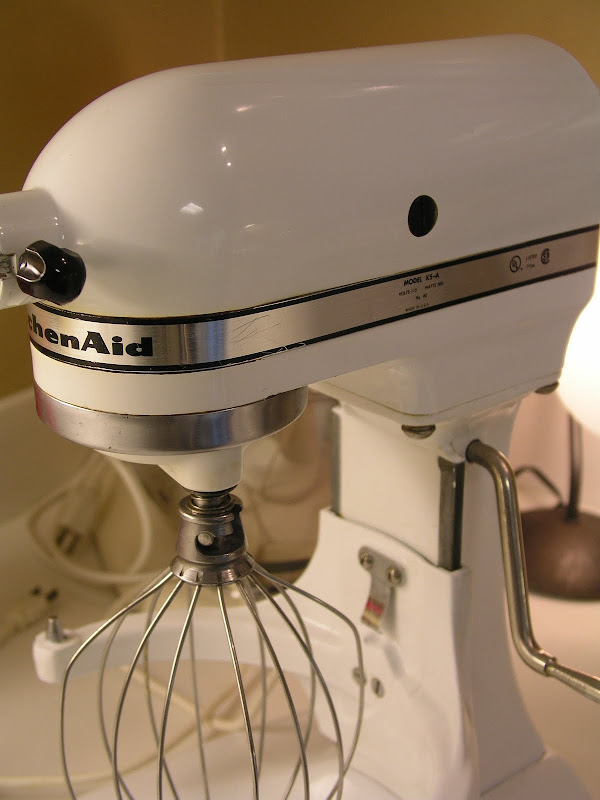 It looks ready for action in the picture below, alongside its younger cousin, a KSM90 in the "almond cream" shade (from a different estate sale - a slight splurge at $60).

I might as well admit something to you. My name is Bill, and I'm a KitchenAid collectaholic. I also have a white KitchenAid Classic (K45SS) -- $8 at a local thrift shop. It was almost as dirty as the latest acquisition and had numerous scrapes where the paint appeared to be missing. Fortunately, I was able to remove them with Soft Scrub. It now looks (and runs) great! 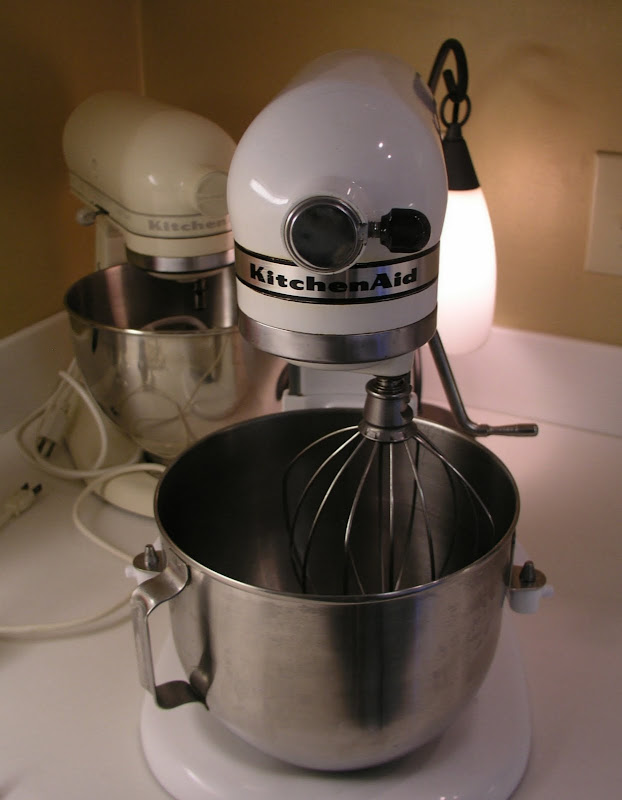 I'm as proud of my "new" K5-A as the lady on the cover of the vintage instruction manual below: 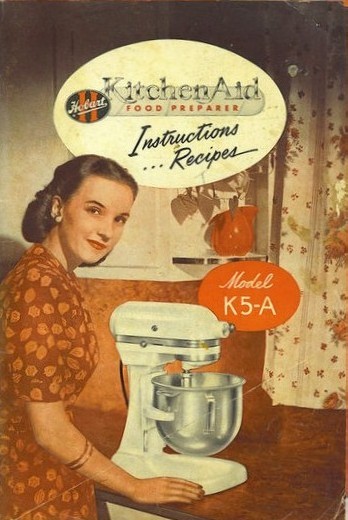 Here's some information on the history of the Hobart and KitchenAid mixers:


Like many home appliances, the standing mixer has industrial antecedents. In the 1908, engineer Herbert Johnson was observing a baker mixing bread dough with a metal spoon; soon he was toying with a mechanical counterpart. By 1915, his 80-quart Hobart mixer was standard equipment on all U.S. Navy vessels, as well as in many commercial bakeries.


World War I intervened before Hobart could jump into the residential market, but by 1918, company executives were testing models in their homes. "I don't care what you call it," legend has one of the executives' spouses espousing, "all I know is it's the best kitchen aid I've ever had."

The name stuck. The first 5-quart countertop KitchenAid mixers were not cheap:$189.50, or about $2,000 in 2002 dollars. Weighing in at 65 pounds, they weren't convenient, either. But that all changed in 1936, when pioneering industrial designer Egmont Ahrens trimmed the mixer down and chopped the price to $55. The iconic Streamline shape has changed so little that Ahrens' bullet silhouette is patented.

In the early years, retailers were slow to take on the KitchenAid mixer. To counter their reluctance, Hobart established a direct sales force made up primarily of women who went door to door offering demonstrations of the new food preparation tool. With the creation of citrus juicer and food grinder attachments in 1919, KitchenAid mixers were on the road to becoming the versatile "food preparation tools," as they were subsequently styled.

Today's KitchenAid mixers can be converted to anything from a pasta maker to a sausage stuffer, an ice cream maker, or grain mill with the addition of optional attachments.

Here's a chef demonstrating the proper way to make mashed potatoes with a KitchenAid mixer:


KitchenAid mixers are now available with higher power ratings and larger bowls, aimed primarily at those who use them for double recipes, kneading wheat dough, and other heavy mixing tasks.


The K5-A did fine with a recipe I found online for country white bread (at seriouseats.com). Here's the result: 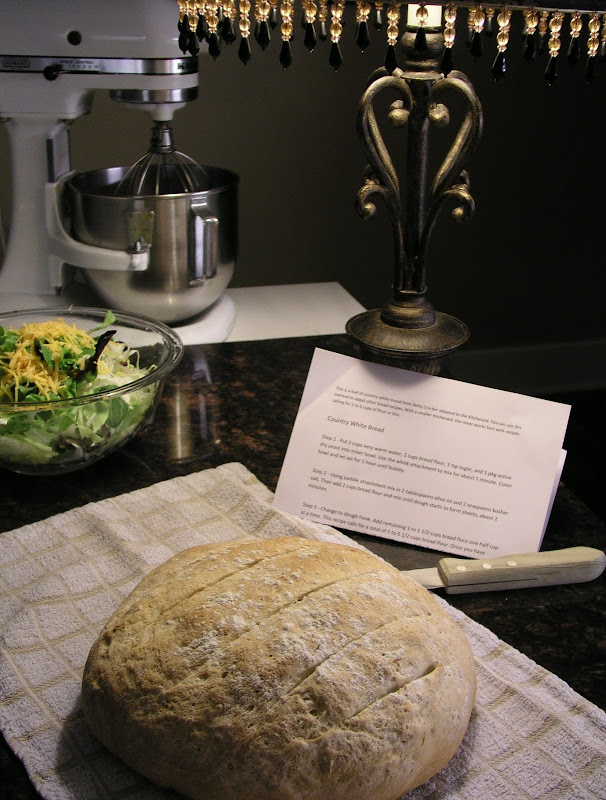 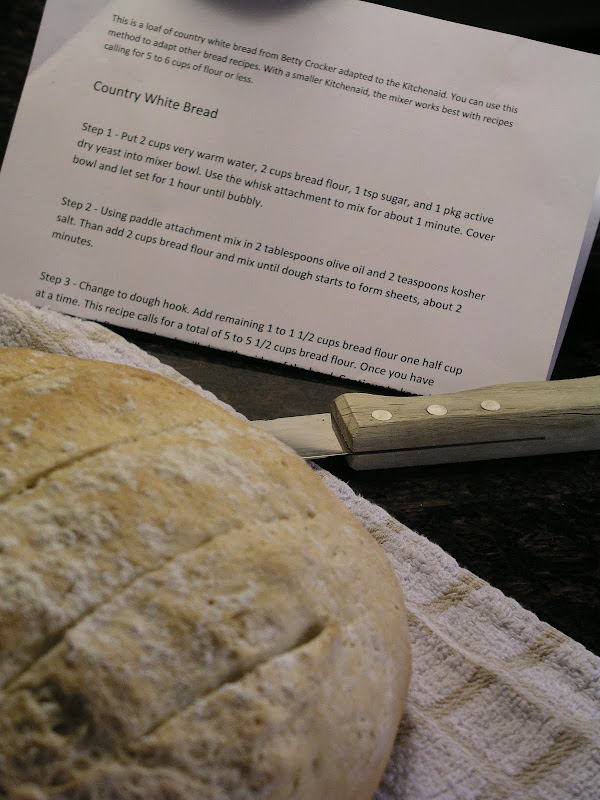 And here's the recipe:
This is a loaf of country white bread from Betty Crocker adapted to the Kitchenaid. You can use this method to adapt other bread recipes. I have a smaller Kitchenaid, so I find my mixer works best with recipes calling for 5 to 6 cups of flour or less.
Country White Bread
Step 1 Put 2 cups very warm water, 2 cups bread flour, 1 tsp sugar and 1 pkg active dry yeast into mixer bowl. Use the whisk attachment to mix for about 1 minute. Cover bowl and let set for 1 hour until bubbly.
Step 2 Using paddle attachment mix in 2 tablespoons olive oil and 2 teaspoons kosher salt. Than add 2 cups bread flour and mix until dough starts to form sheets, about 2 minutes.
Step 3 Change to dough hook. Add remaining 1 to 1 1/2 cups bread flour one half cup at a time. This recipe calls for a total of 5 to 5 1/2 cups bread flour. Once you have added enough flour, the dough will clean the sides of the bowl. Contine to knead with dough hook for 2 to 5 more minutes. You may have to stop and redistrubute the dough
Step 4. Coat a bowl with olive oil, add dough, cover, and let rise for 45 minutes to 1 hour, until doubled.
Step 5 Gently deflate dough and shape into a ball. Place on greased cookie sheet. Cover and let raise until doubled, about 45 minutes to 1 hour.
Step 6. Heat oven to 425 degrees. Place cake pan with inch of water on bottom shelf of oven. Spritz loaf with water and slice 3 to 4 decorative gashes across top of loaf, about 1/8 inch deep. Sprinkle with flour for a rustic look. Bake 35 minutes.


In terms of color, I still like the classic white or cream, but there are many, many ... many options these days! 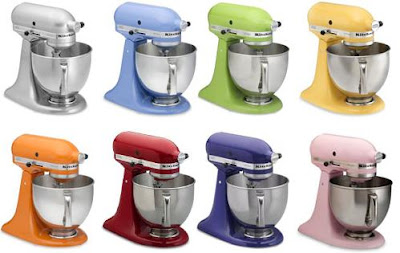 Julia Child loved her cobalt blue KitchenAid. The one that sits on the counter in her kitchen at the Smithsonian contains a special feature: the mixing bowl is engraved with “Bon Appétit Julia Child.” This stand mixer was a workhorse in her kitchen and appeared regularly on the television series Baking with Julia. 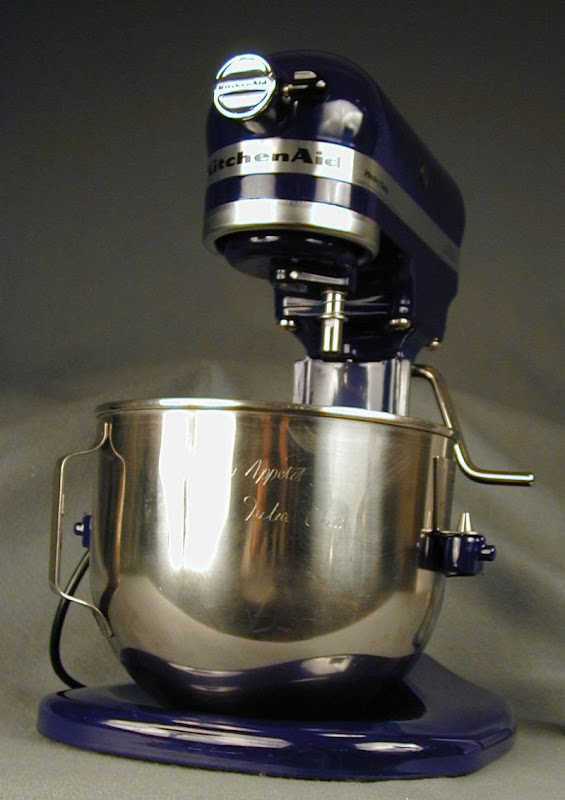 "Although you can prepare the dough by hand, a heavy-duty mixer with flat beater attachment makes light work of it . . ." 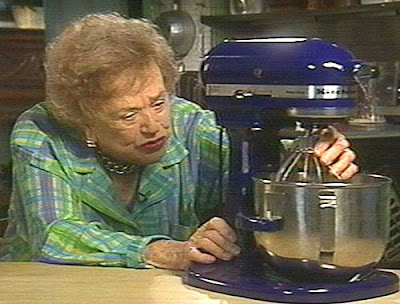 What color is your KitchenAid? 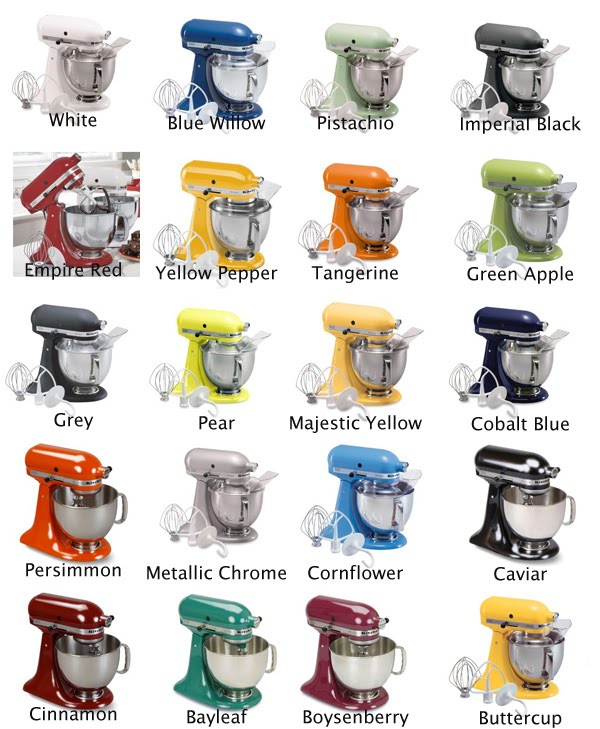 I'm not a full-fledged foodie by any means, but I'm joining the charming and talented Michael Lee of Designs by Gollum for Foodie Friday. Check out the culinary fun HERE!
Is cleaning a neglected mixer a metamorphosis? I think it could be considered a minor one at least, so I'm also participating in Metamorphosis Monday with Susan of Between Naps on the Porch. Check out Susan's fun post and all her participants' great transformations HERE!