Tulips, Magnolias, and Cupcakes! For Halloween?

It seemed that I wouldn't have a tablescape post for you this week. The irony would have been that the tables were set. For a dinner party. A real one -- with food and drink, as opposed to the virtual ones I often set for Affordable Accoutrements with colored water for "wine" and photographs taken throughout the day in a variety of lighting conditions.

An hour before guests were due to arrive -- just enough time to shower and dress, put the appetizers in the oven, and move the food to the kitchen island "buffet." 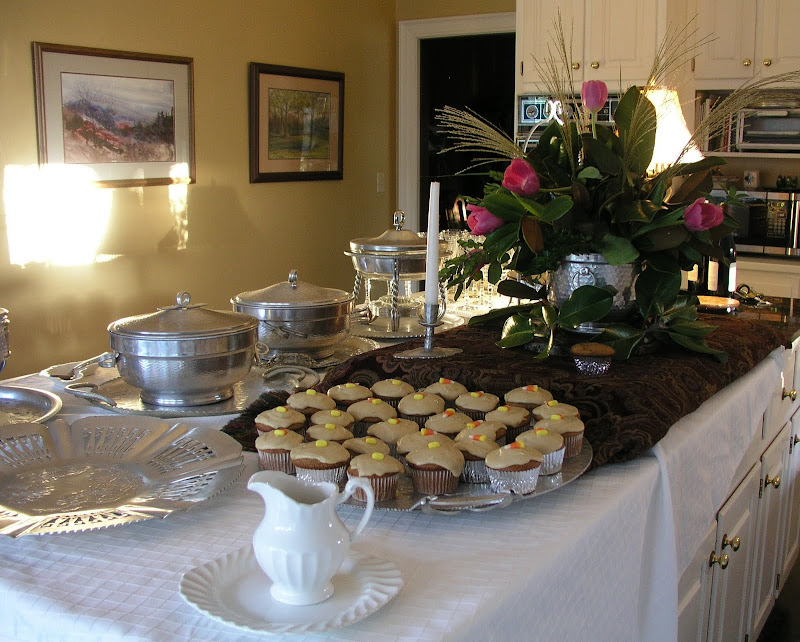 I stacked white ironstone plates at the end. They're the swirl pattern -- mostly Johnson Bros. "Regency" (UK), with some Myott Staffordshire "Old Chelsea" (UK) and Sheffield "Bone White" (USA). The shades of white vary slightly, but I think they work well enough together to use this way.

The vintage glasses are among my favorites - Libbey/Rock Sharpe 3005.

I took a tip from Martha of Lines From Linderhof and opted to have guests use the same glasses for both cocktail hour and dinner. Otherwise the "welcome" wine glasses end up on the tables, mingled with the dinner wine glasses (and, even if they don't, it involves additional glasses to wash afterward). 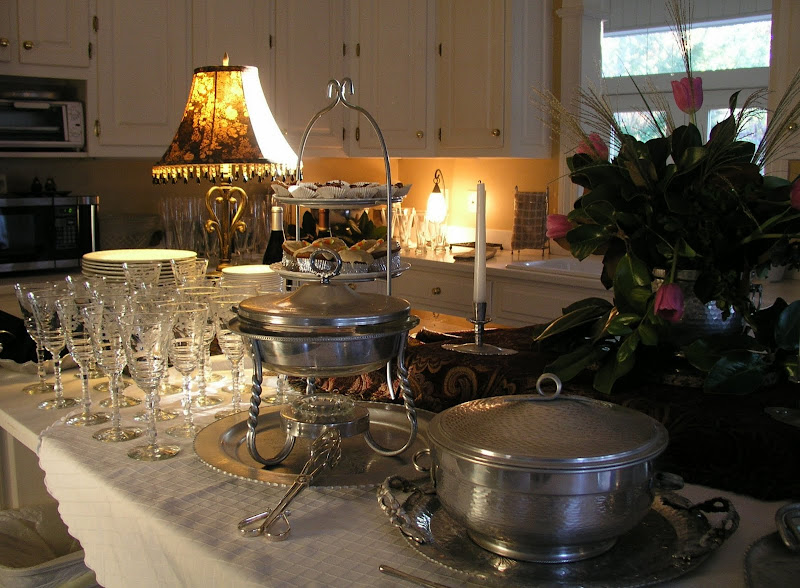 Since it was to be a relatively casual meal, I used ironstone that can go in the dishwasher and vintage aluminum serving pieces, rather than silver. Aluminum's easy to clean and doesn't have to be polished. Don't put it in the dishwasher though! It can cause discoloration that's difficult (if not impossible) to remove. 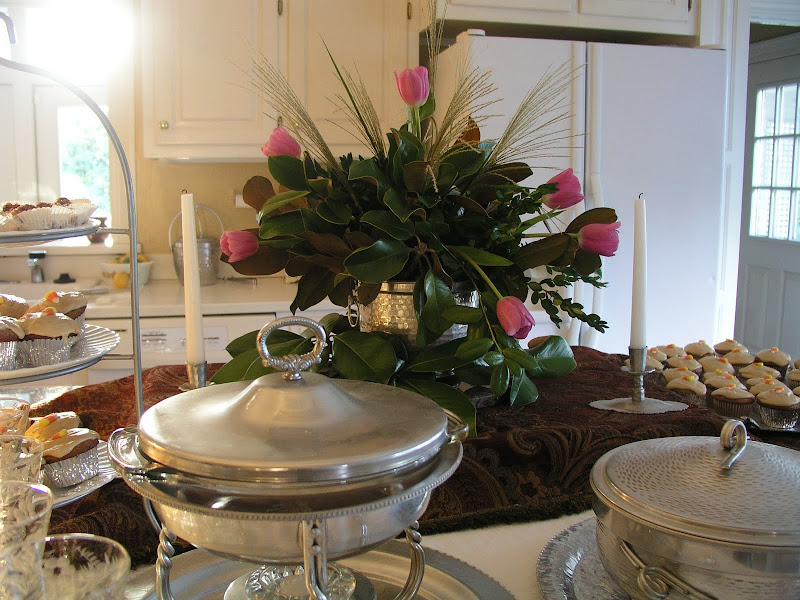 I made spice cupcakes with caramel icing. My mother always made them for Halloween when I was a child, topping each one with a single piece of candy corn. She served her spice cupcakes to three generations of trick-or-treaters.

Naturally, after the holiday became a really scary one (because of threats/media hysteria concerning the dangers of unwrapped candy and homemade treats), the cupcakes became her "reserve stock," offered only to relatives and friends. She always asked the parents first. Many of the young parents also gladly accepted one for themselves, remembering them fondly from their own childhoods.

Hers tasted better than mine (and definitely looked better!), but this is the general idea. 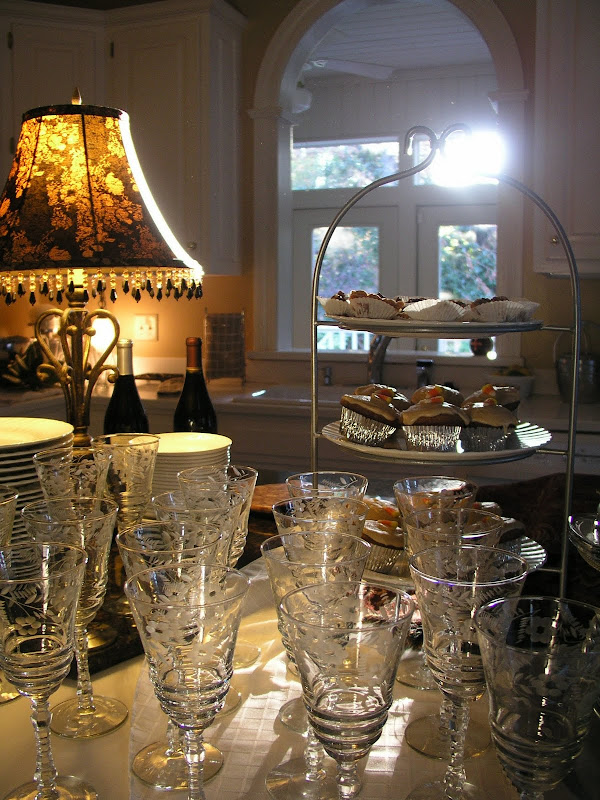 No pictures by candlelight this week. By the time I lit candles, the guests had arrived! 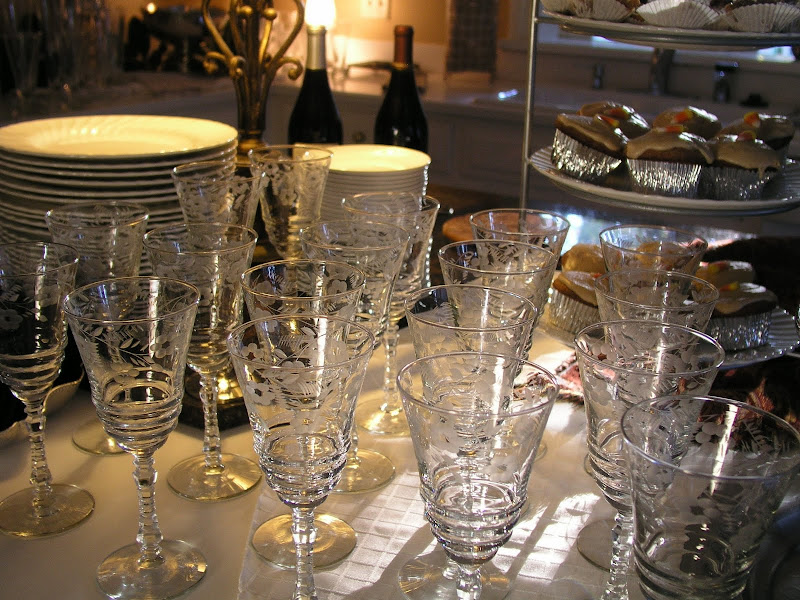 I did use one silver piece -- a vintage punch bowl served as a wine cooler. The beer went into a large ice-filled Wexford glass punch bowl. I supplied plenty of pilsner glasses in a variety of sizes (I'm not a beer person, but I do like the shape of the glasses). 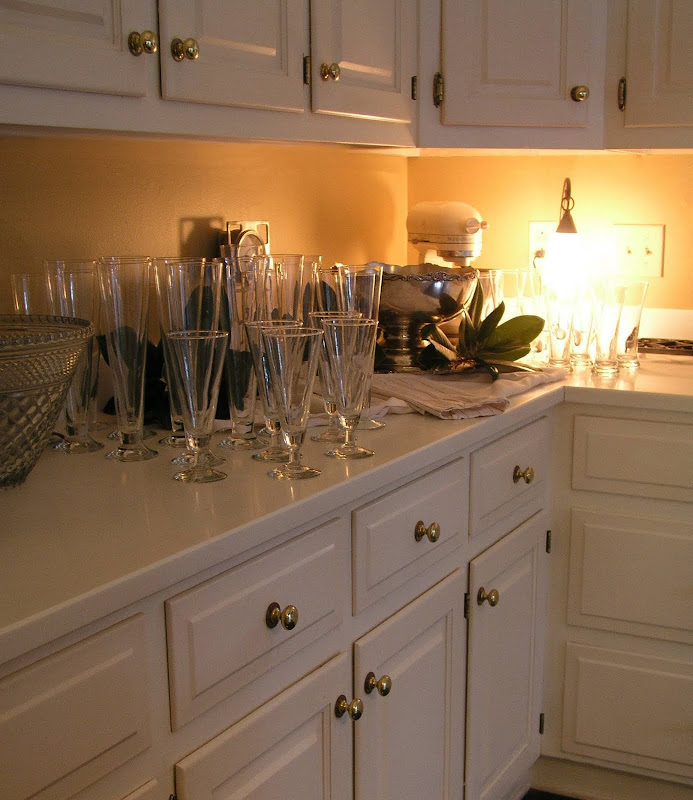 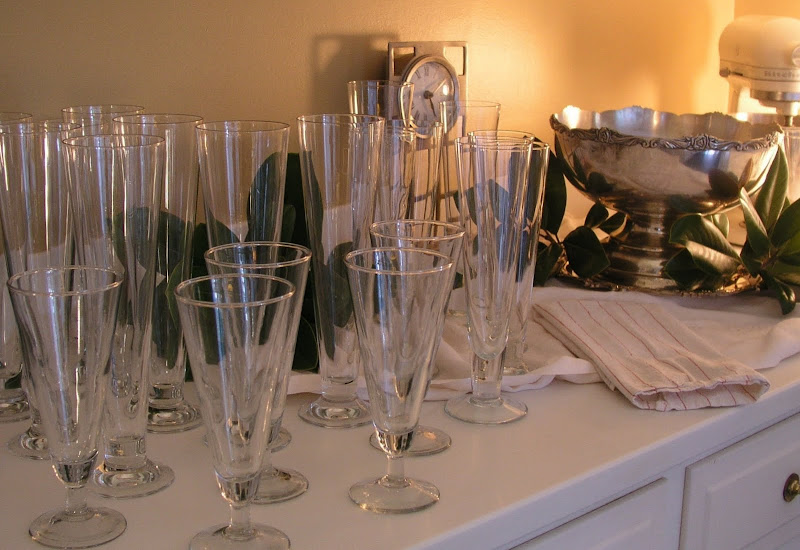 Most of the wine for the evening came from Crown Winery, a beautiful West Tennessee winery (the only one in Tennessee that's solar-powered). Their website is HERE. 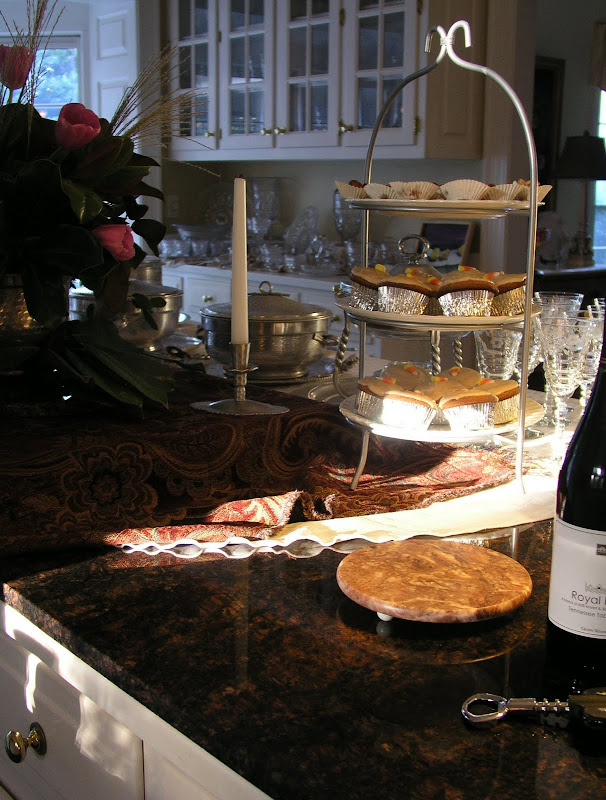 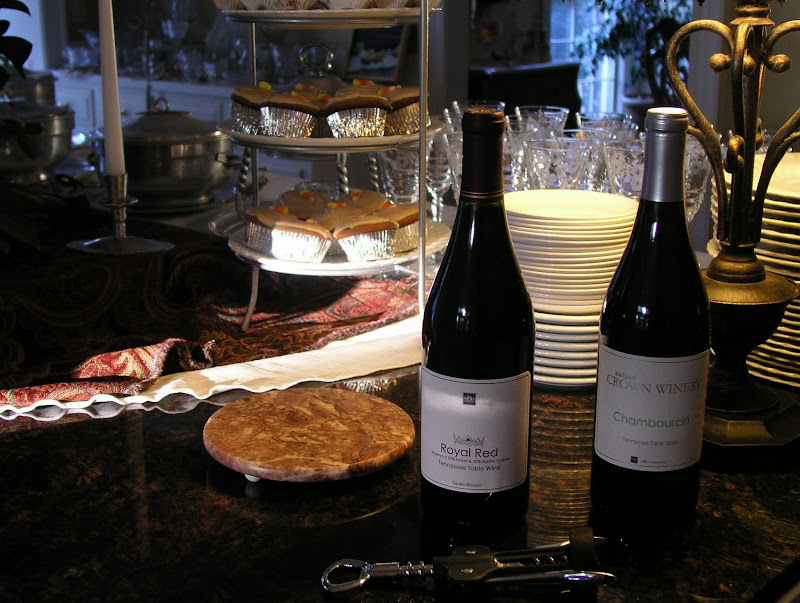 There's a table for four set in the kitchen. 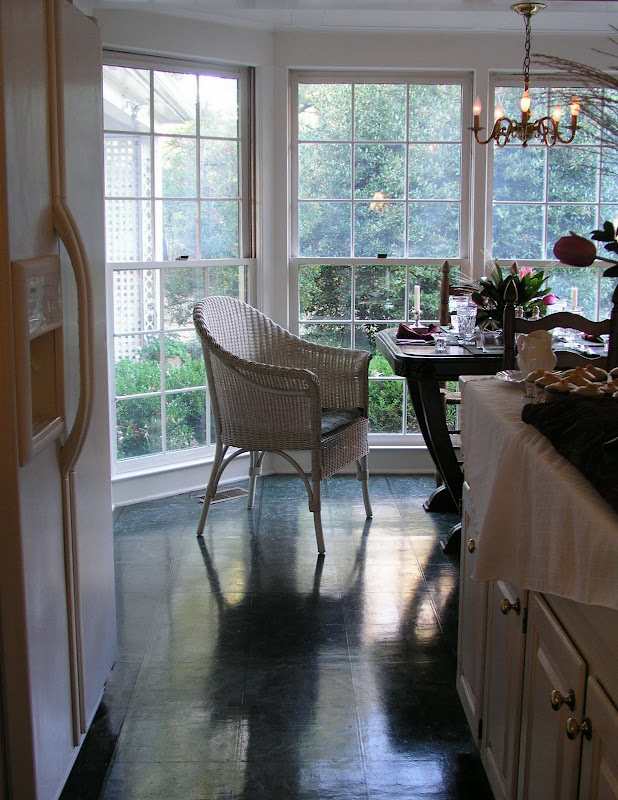 I considered using chargers, but decided to keep it really simple. Just a water glass, flatware, a lotus-folded napkin, and that iconic Halloween treat, candy corn. 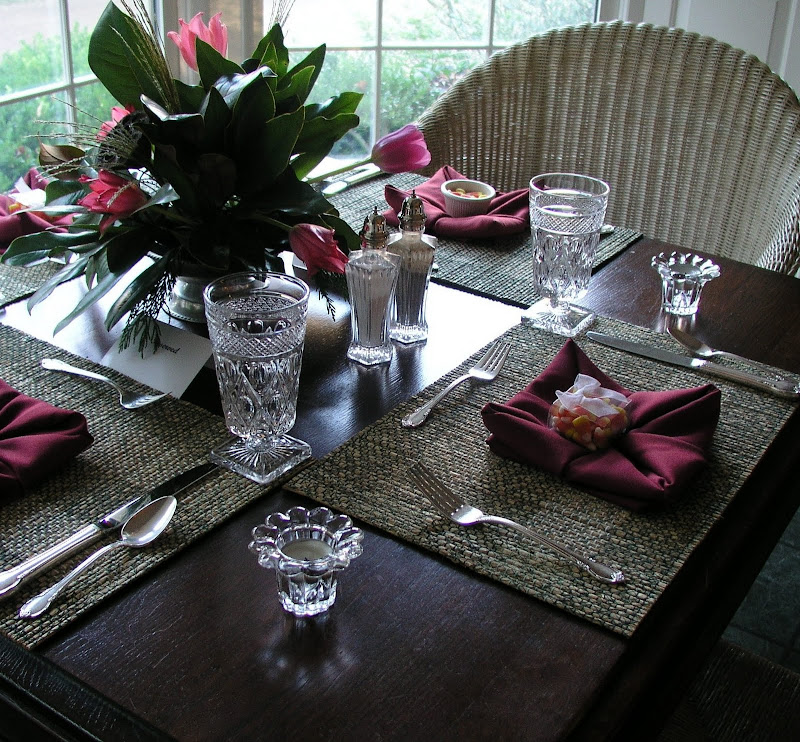 I hid the gas cooktop under three sheets of foamcore board (after switching off the electric lighter at the breaker box) and covered it with a cloth. It provided space to put a floral arrangement (and eliminated time I'd have spent scrubbing it!). 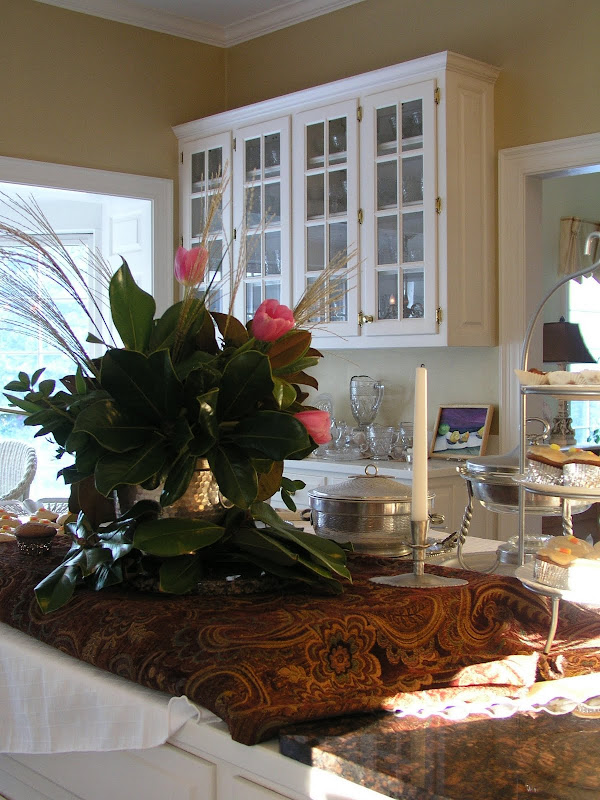 A table for eight is set in the sunroom. The original plan had called for dining on the deck, and there are candles in hurricanes on the tables ... but it turned out to be too chilly for that. 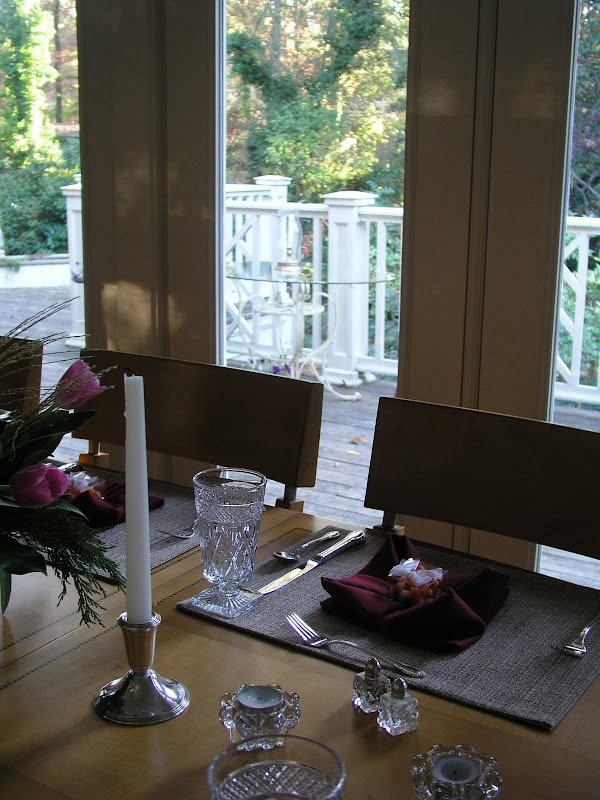 I kept the tables uncluttered. The flatware is "Remembrance" by 1847 Rogers Bros. The restaurant napkins are from a local charity thrift shop. 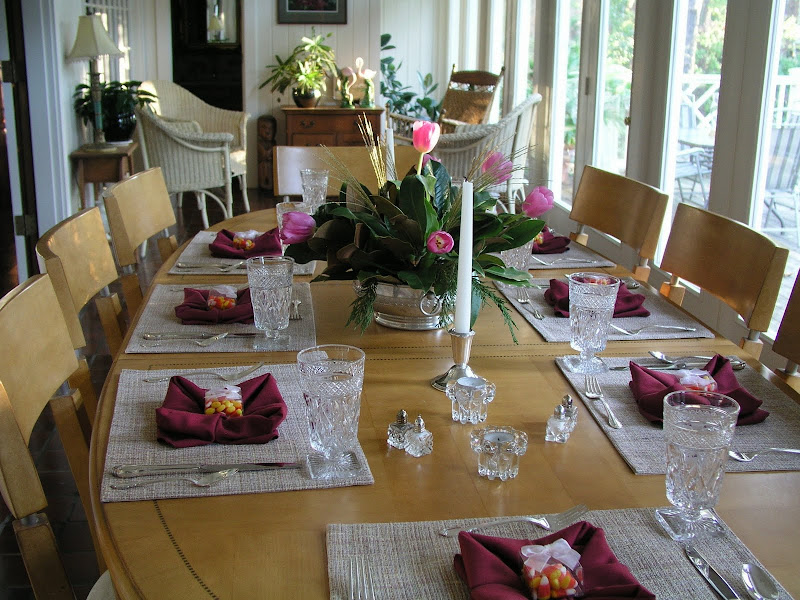 The flowers are arranged in vintage aluminum containers ... 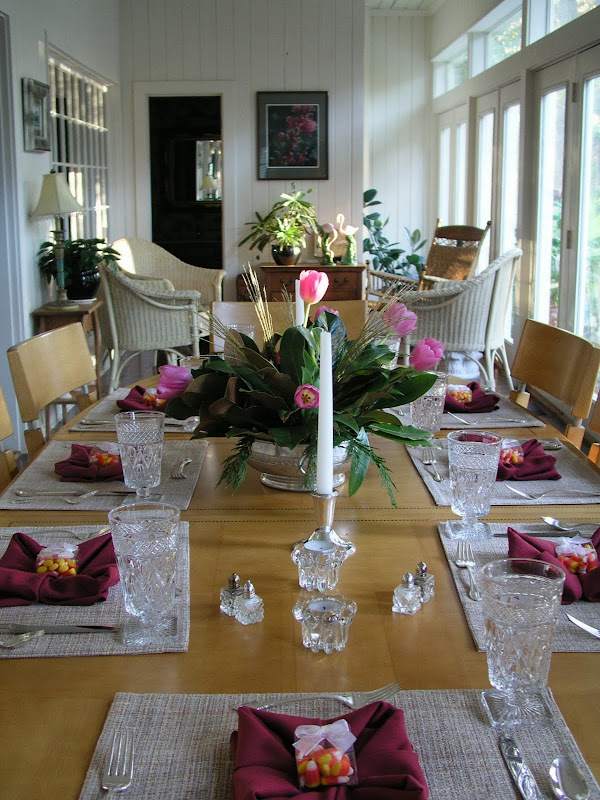 The centerpieces include evergreens (mostly Southern Magnolia leaves), with tulips scattered throughout for color. I added a single garden rose (perhaps the last perfect one of the season) to the centerpiece in the dining room. The tulips came from Kroger's floral department. Total cost was under $5. 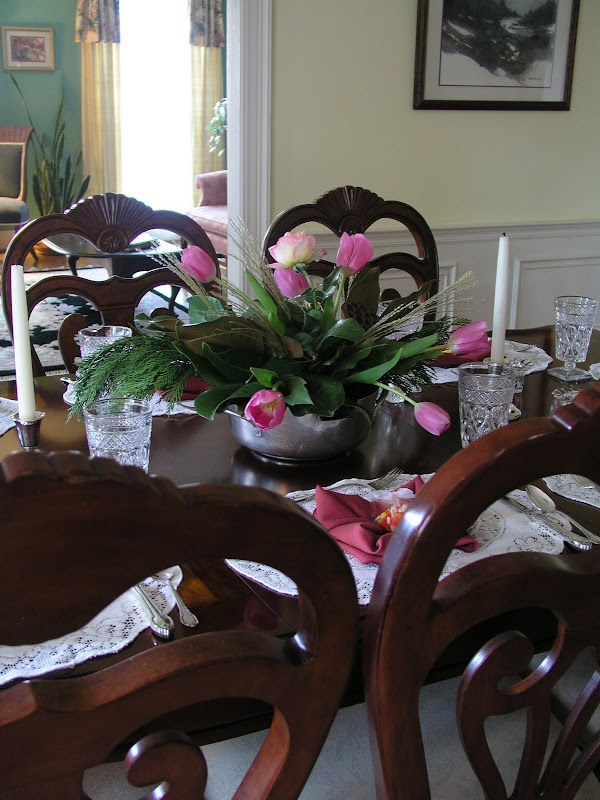 Even though I used round containers for the flower arrangements, I gave the ones on the rectangular tables an oblong feel by extending the greenery on two sides. 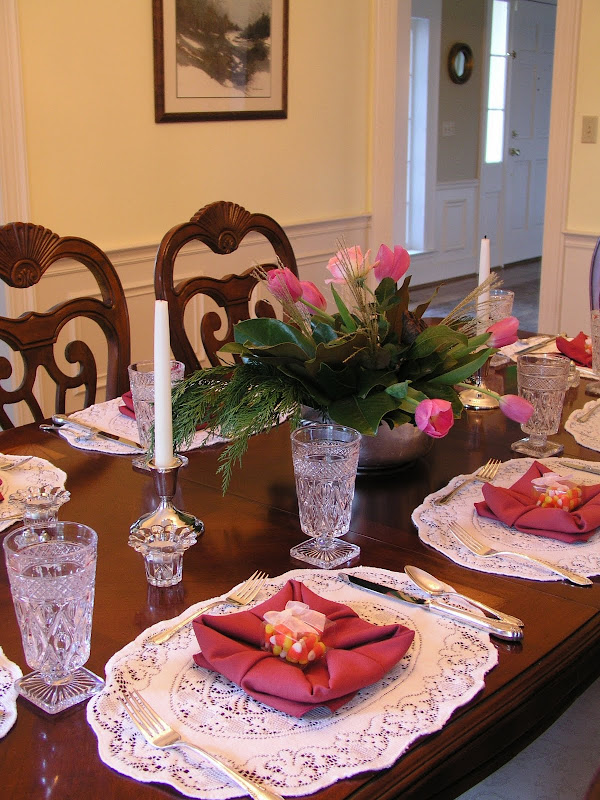 The iced beverage glasses are Imperial's "Cape Cod" pattern. There was iced tea available, but only one person requested tea -- water for everyone else. 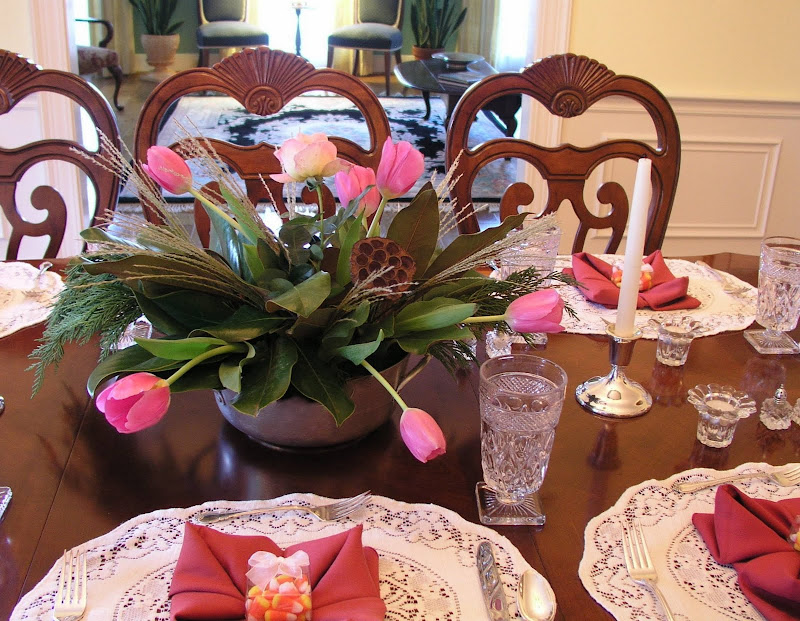 Since it was Halloween Eve, there was (wrapped) candy available. Several trick-or-treaters stopped by, even though the city had officially declared the following evening to be the night for ghosts and goblins to make their appointed rounds. I always select candy I'll enjoy eating if there's any left over (OK, I've also learned to hide some in advance ... just to be certain not to run out of my favorites). 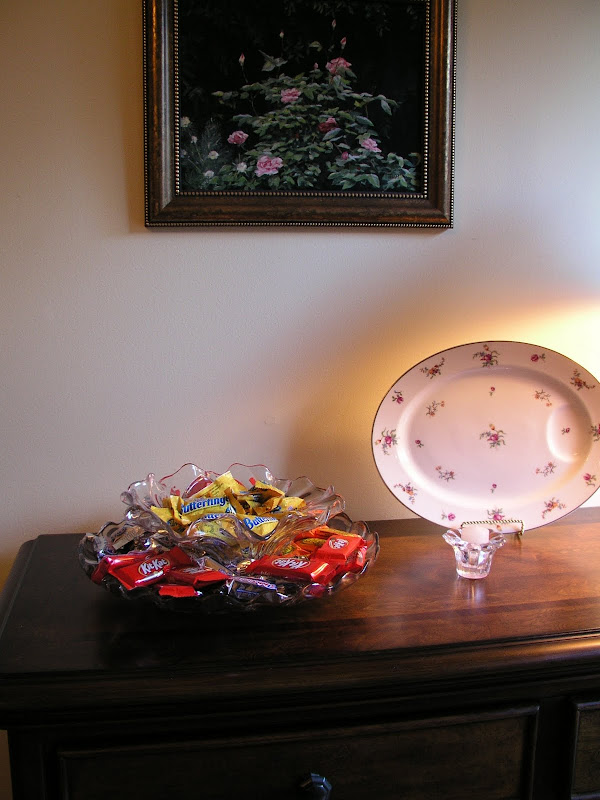 Hope you had a Happy Halloween! Please join Susan of Between Naps on the Porch for Tablescape Thursday!