I finally managed to get some holiday decorating done over the weekend. Yes, I realize it won't be long until it's time to take it all down again ... I've decided I'd rather be sorry to see it go than to say, "Thank goodness I don't have to look at that any longer!" Besides, I like to use cut evergreens throughout the house, and I didn't want to bother with wet floral foam and water pics to keep it looking fresh.

I made the magnolia wreath the previous weekend. It still looks OK, but the magnolia cuttings over the fireplace were looking dry and rather sad. I'll show you what I replaced them with in a moment.

To assemble the wreath, I took a basic old "evergreen" wreath and used craft glue to attach fresh magnolia leaves. The wreath was shedding and ready for the trash collector, so I figured I had nothing to lose. I already had the glue and the wired gold ribbon, so it cost nothing to make. 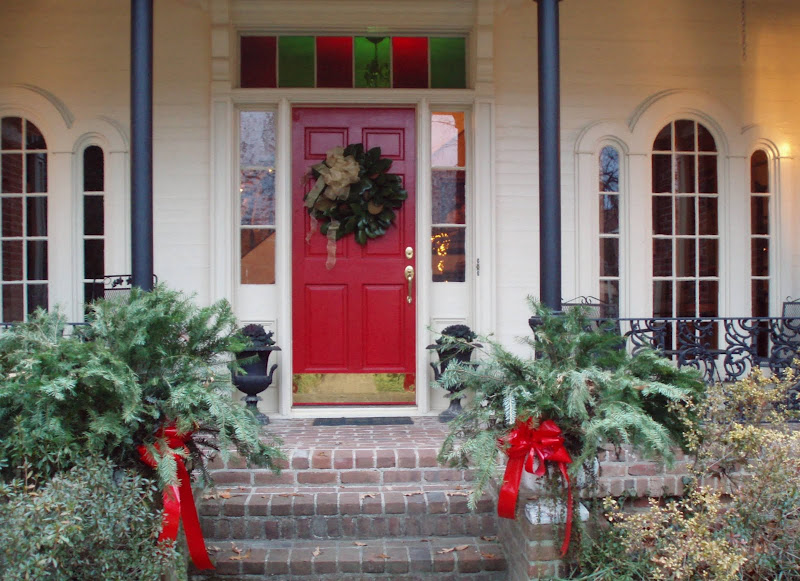 With the red and green glass above the front door, the house seems to have a touch of the Christmas spirit all year 'round. The greenery remnants I used in the urns flanking the sidewalk were free at a nearby Lowe's store. It was in a bin near the entrance to the garden center. The workers were very nice, telling me to take all I wanted.

I used inexpensive outdoor ribbon to make the red bows. I decided to leave the dried-up ferns in the urns to provide support for the greenery. 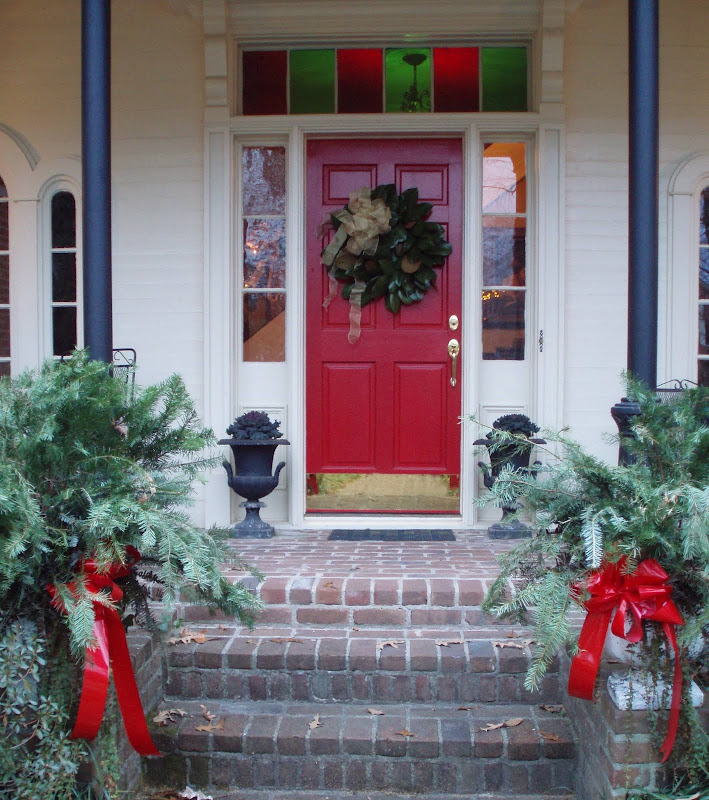 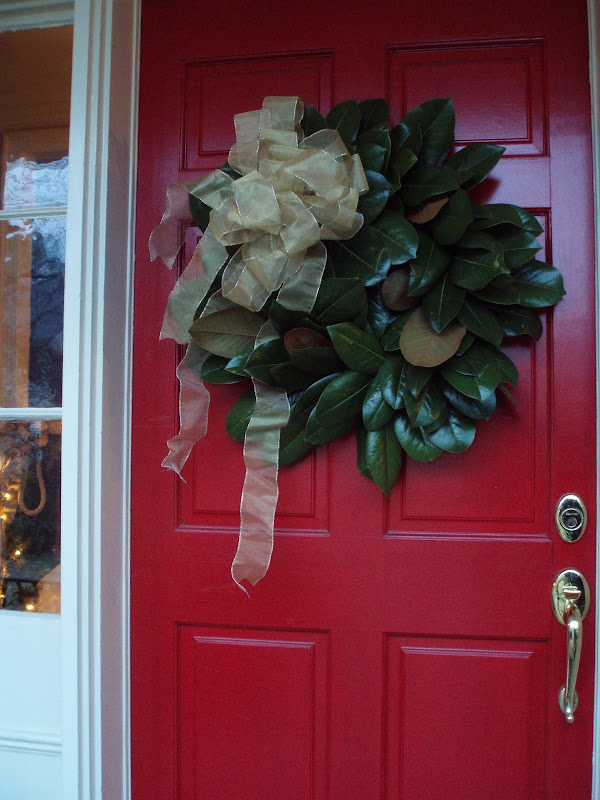 I used artificial garland to decorate the staircase. As I'm sure everyone in Blogland knows, it's easy to create the illusion of real greenery by adding evergreen cuttings, strategically placed. The pinecones were already attached to the garland. I simply added clear lights and bows (I made them a few years ago to decorate the mailbox stand -- they just needed fluffing). 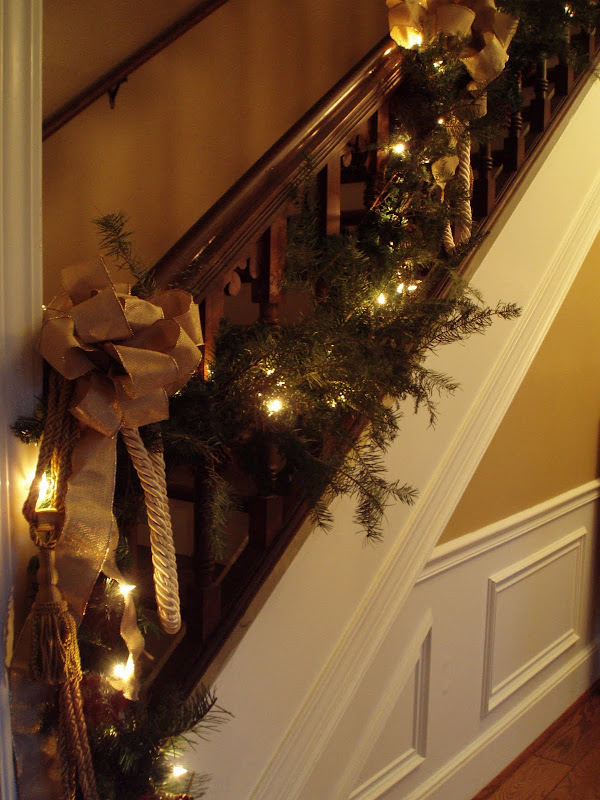 It still seemed a bit plain, so I added thrifted drapery tiebacks and tassels. I like for the garland to "puddle" slightly on the floor ... 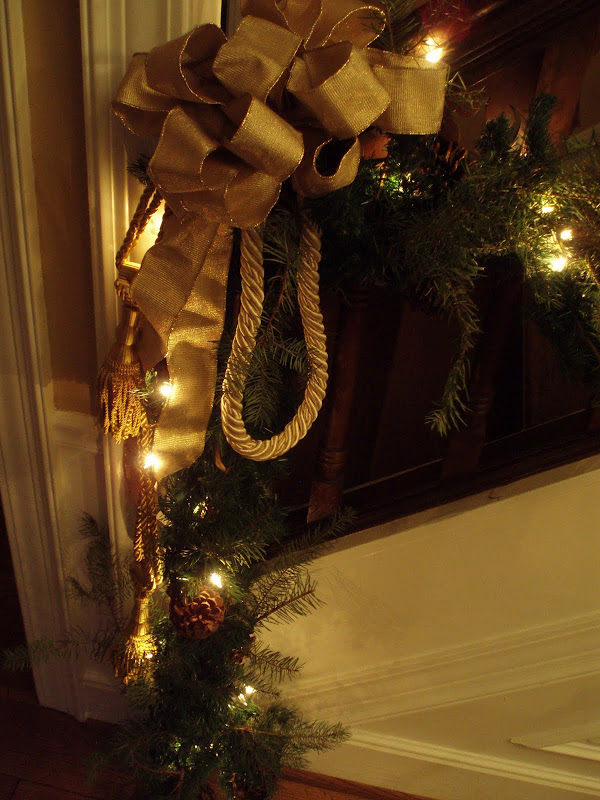 Shall we continue the "tour?" I added clear lights to the ficus tree in the dining room and garland to the sitting room mantel. 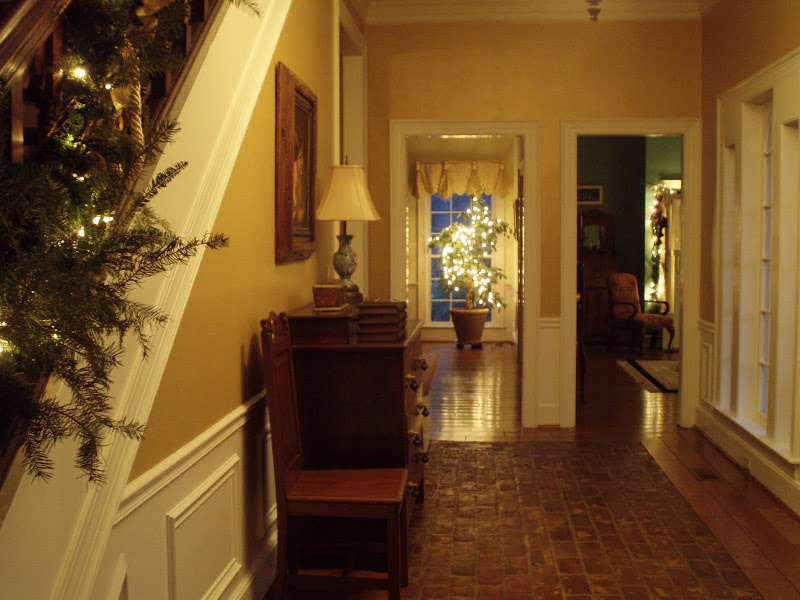 I left the artificial garland in the center "un-fluffed" and used thin, vinyl garland down the sides. That allowed the real greenery I added to look lighter, more airy. I attached wired gold bows at the upper corners and used a mixture of red and clear lights. 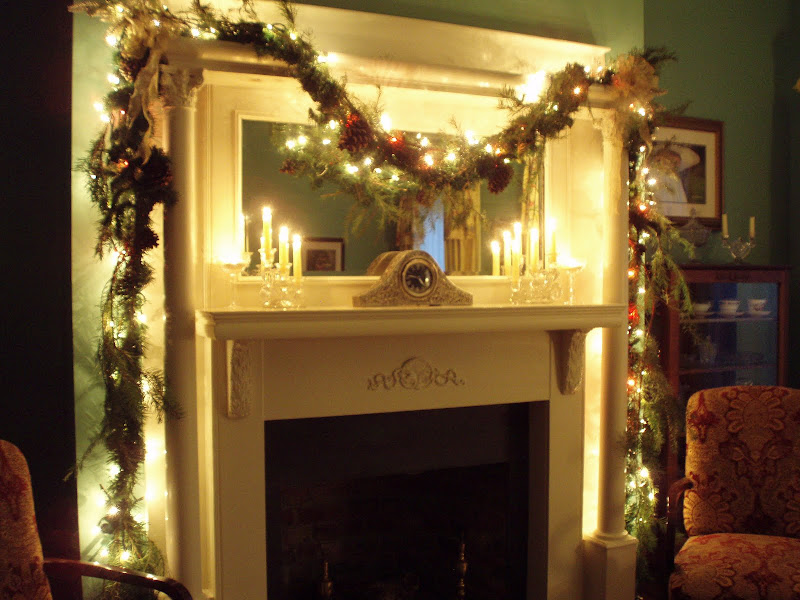 Somehow the bluish-green walls seemed to call for colored lights in this room. Vintage Cambridge candleholders and Fostoria Holly stems flank the mantel. I like the way the old mirror reflects the light and the sparkle of glass. 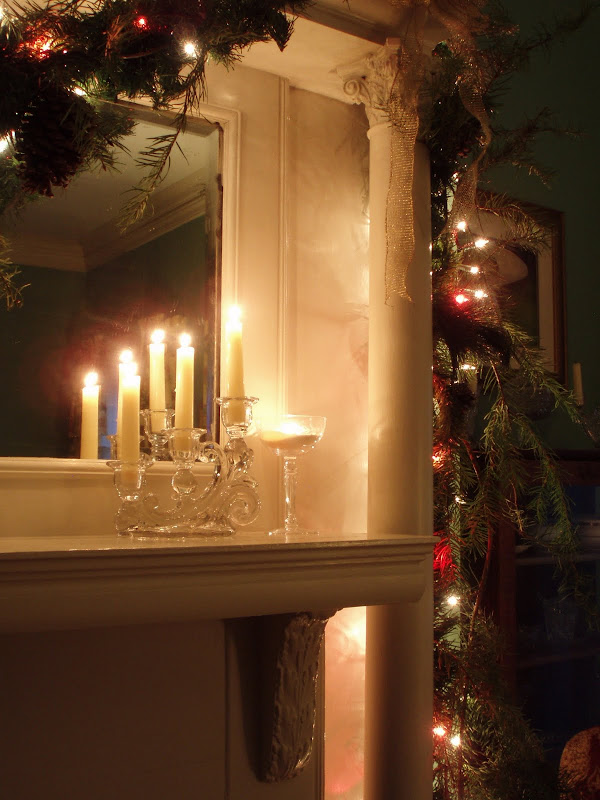 Next we'll move to the den. Note the book on top of the stack on the coffee table. It's Komali Nunna's Entertaining From an Ethnic Indian Kitchen -- the cover's so beautiful! If you haven't seen the book yet, you should visit Komali HERE and place your order. It's would make a great last minute gift for someone you love (including yourself!). 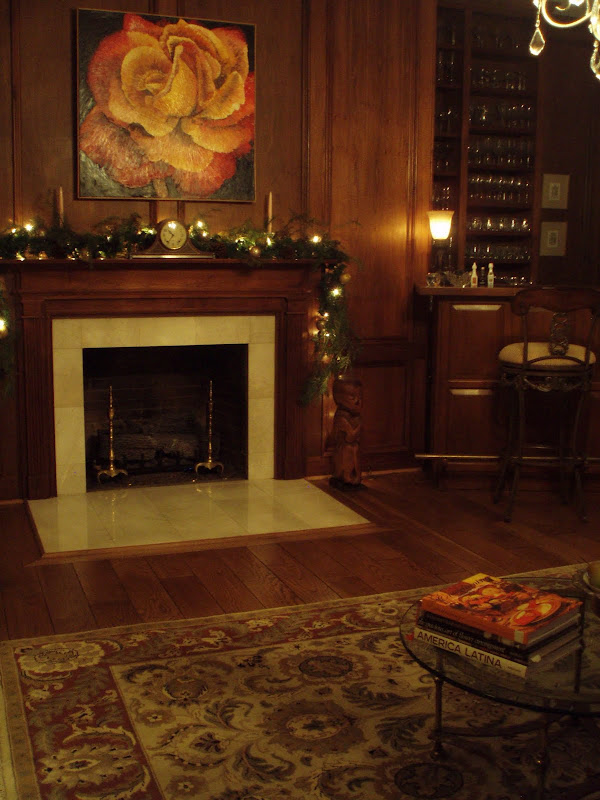 I attached glittery gold ornaments to this faux garland. Naturally, I added real evergreen cuttings. The ornaments were on clearance after Christmas last year (or year before) at K-Mart. They only look fragile -- they're made of styrofoam (which was nice since I dropped a couple of them as I quickly placed them!). I only wired the ones on that were near the edge or hanging over the sides). 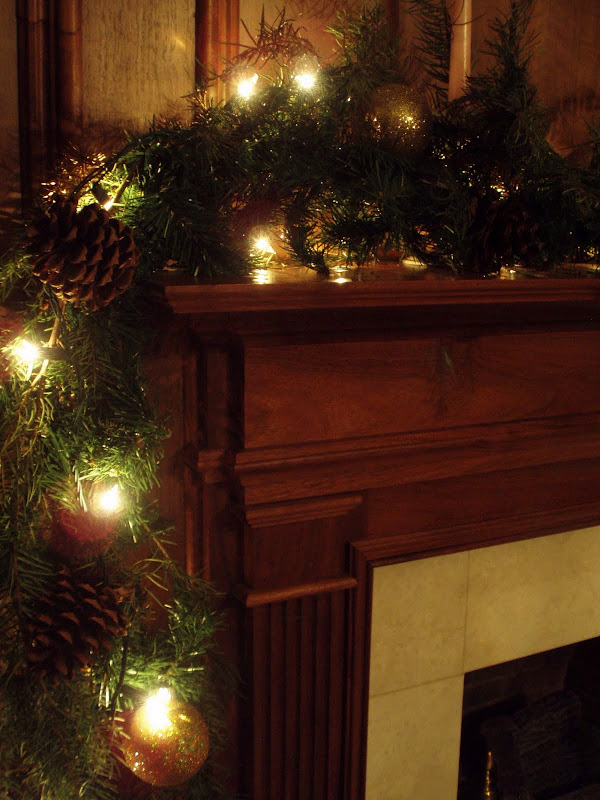 Would you like to see the tree? It's in the sunroom this year. 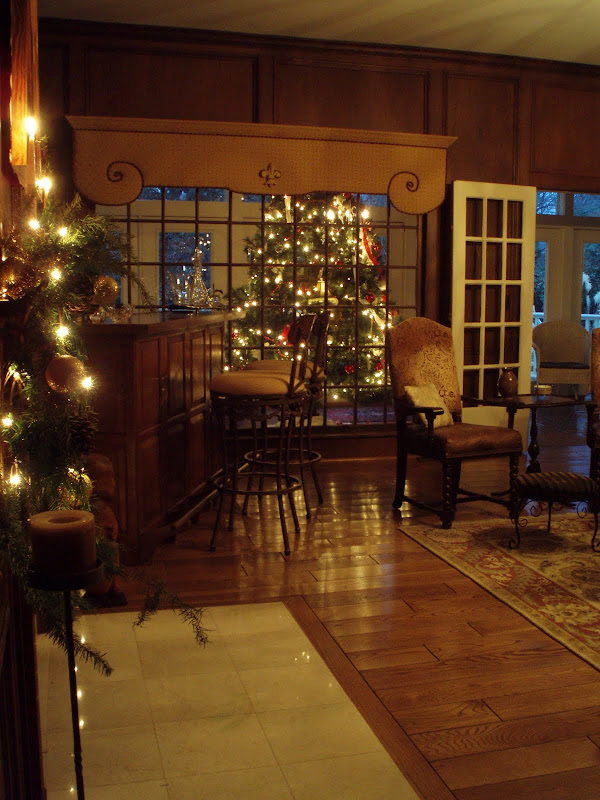 I had a smaller one there two years ago. Viewing it from the den always made me think of being a child and seeing Christmas decorations in windows of shops. 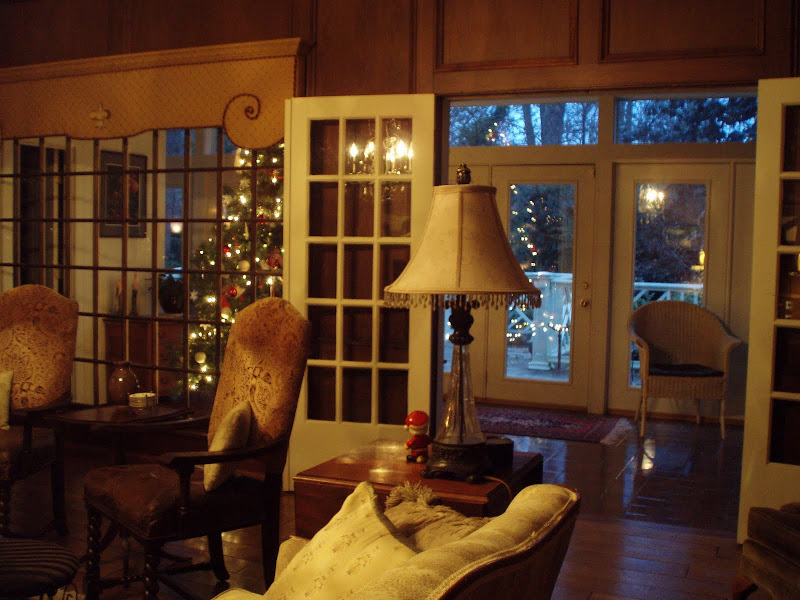 I used the biggest tree I have this year (don't ask how many are in the attic!). It's a 10 footer that came so close to the ceiling I decided to let a bow serve as the topper (a tall white angel in the attic was very disappointed!). 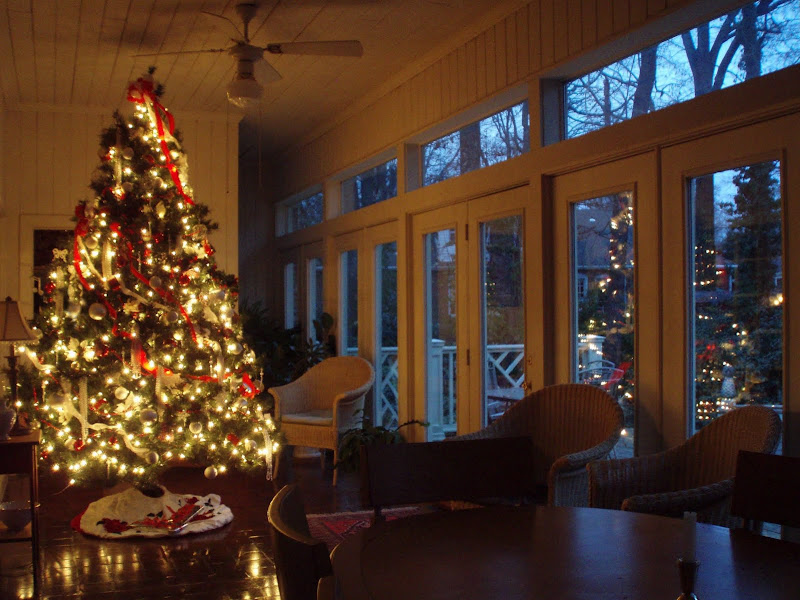 Where are the gifts? The ones that are bought aren't wrapped yet! Obviously I like the excitement of last minute shopping (it seems so much easier to decide at the 11th hour!). Besides, we have to leave room for Santa to place the gifts he brings down the chimney! 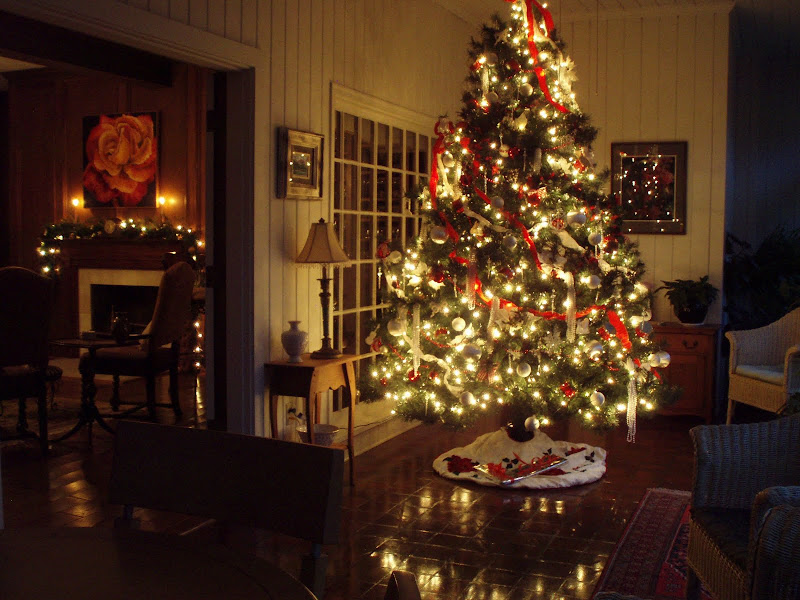 The "pearls" are strands of inexpensive beaded garland. I cut it into sections, looped it around my hand a few times, and used coated wire to attach it to the branches. 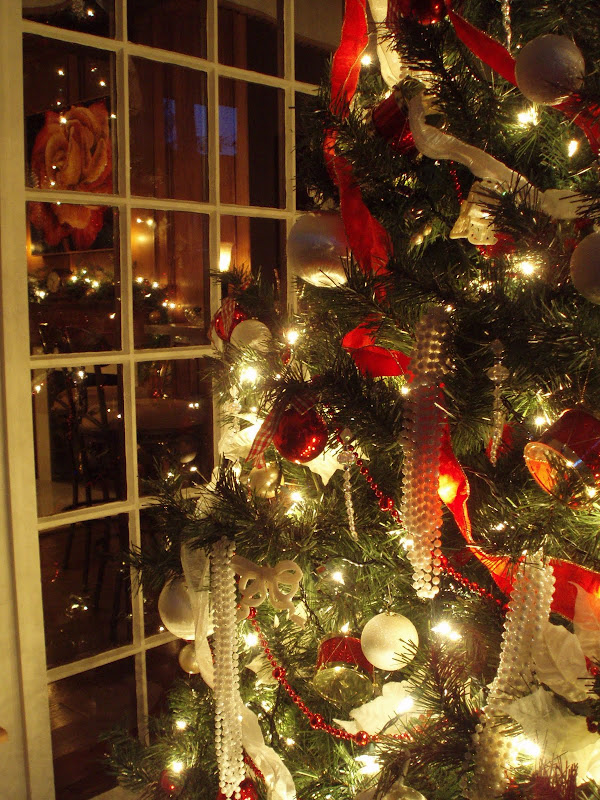 The view from the deck. Baby, it's cold outside! 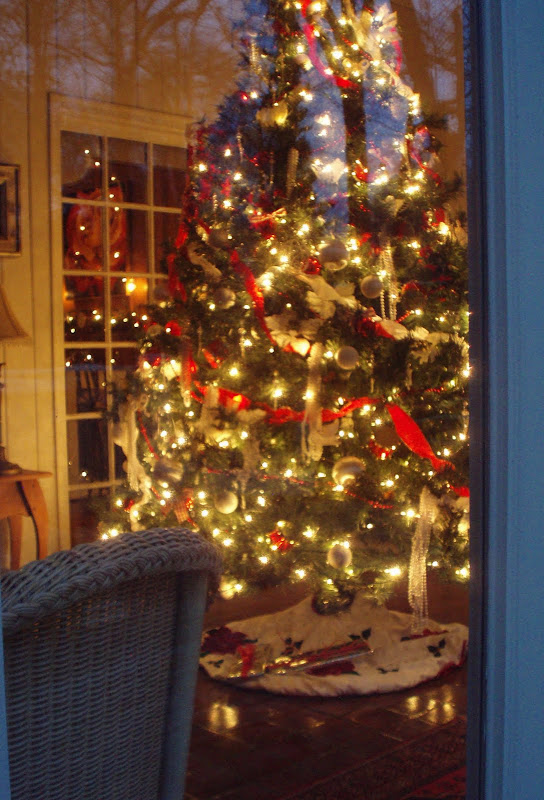 I called last year's holiday table (below) "Fire and Ice." It was mostly silver and creamy white. I filled a compote with ornaments that looked like giant pearls and used lots of candles in vintage glass and silver holders. If you didn't see it, you can view the post HERE. 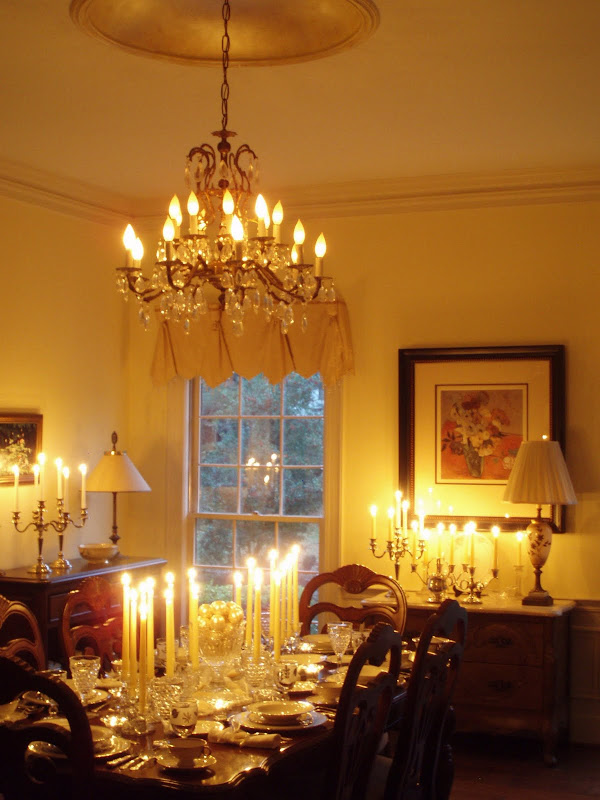 I think the vintage Heinrich and Company "Golden Harvest" dishes will be the ones I use this year. I spotted them at the local Goodwill store. Eight full place settings with lots of serving pieces. I'm probably tempting fate by telling you this, but there's not a chip or scratch on a single piece -- no sign of ever having been used at all. I suspect that they were someone's prized possession, displayed in a china cabinet since the 1940s or 50s. "Too nice to use" or "maybe someday ..."

I didn't have time to set a table for you with them yet, but I'll try to do that this weekend. See you next week? 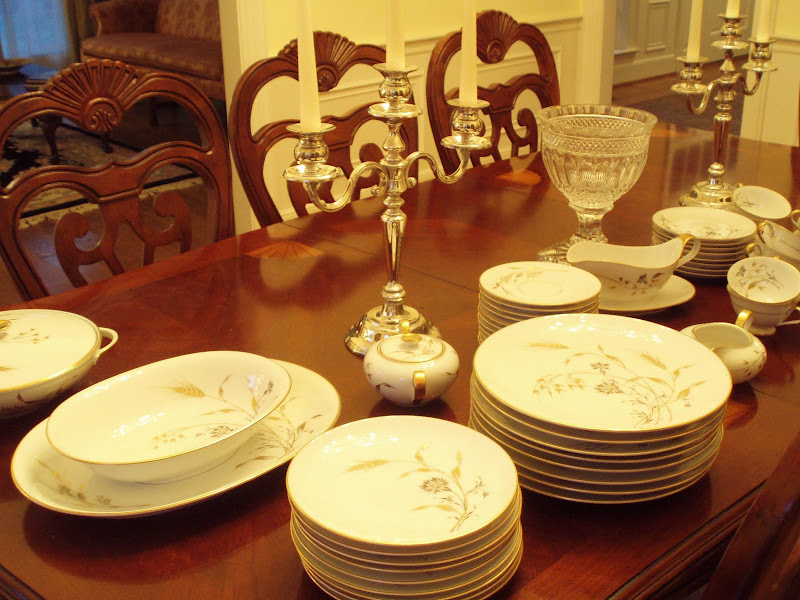 I have news to share from the nice folks at April Cornell. They're offering tablescape bloggers and readers an "Exclusive Tablescaper" promotional code to use online. To take advantage of their offer, please enter LINEN10OFF at Checkout. There's also a limited time promotion of 25% off current season product to which you can add your code for 10%.

If you’d like to participate in their tablescapes contest, send pictures of table settings you’ve created with AC products. You could earn 100 April Cornell dollars! They've extended the deadline to January 3, 2011.

I'm linking to Susan's Tablescape Thursday at Between Naps on the Porch. I hope she won't mind since I only shared a picture from a previous tablescape (plus a "teaser" for next week). I hope you'll visit Susan and all her talented participants! I'm also linking to the Holiday House Tours Party, hosted by Julia of Hooked on Houses. Check it out HERE.

Wishing you the happiest of holidays!