I set a simple table for you today, using mostly vintage items. My goal was to keep the overall look clean, functional, and uncluttered. No fine china, no candelabra, no place mats/tablecloth, no chargers, no place cards, no delicate crystal -- although I very much like ALL those things!

The centerpiece is elevated. This serves a twofold purpose, preserving precious space on the tabletop and facilitating guests' conversation and visual interaction. 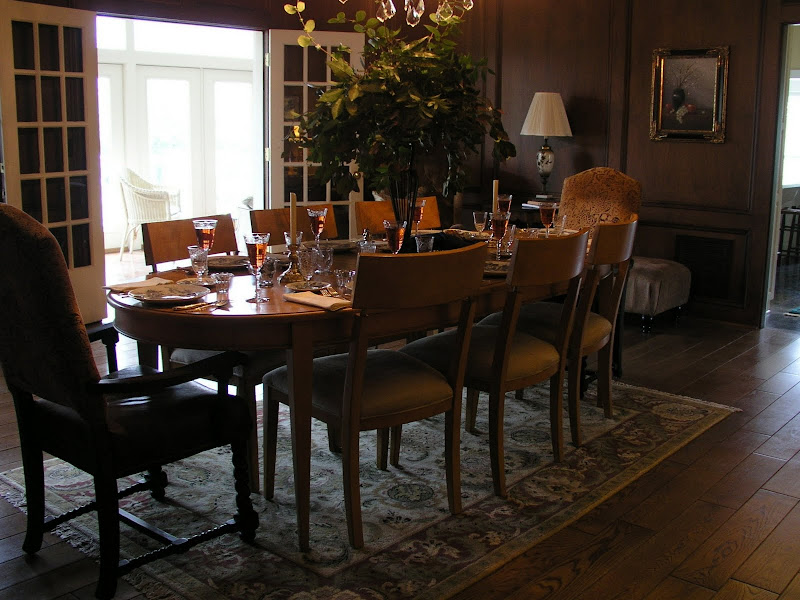 And, OK, it looks rather dramatic. 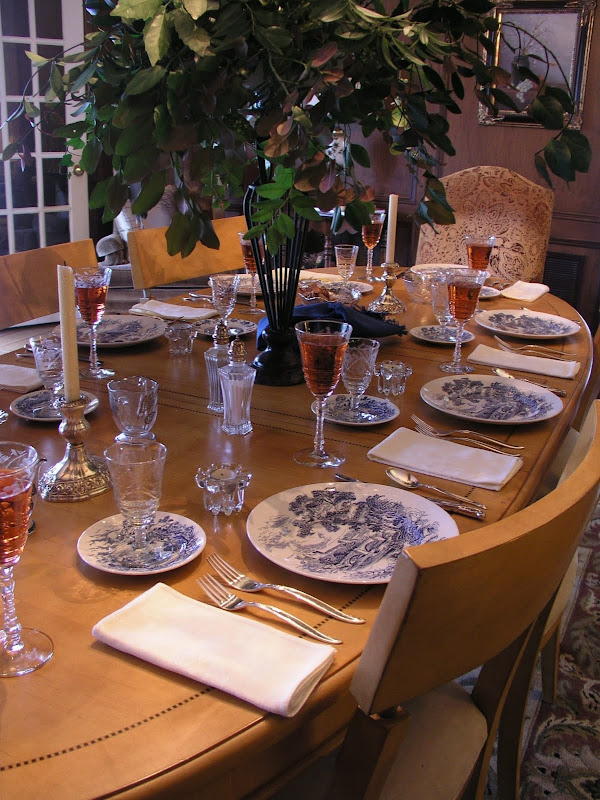 
Wikipedia: Enoch Wedgwood (1813-1879) was an English potter, founder in 1860 of the pottery firm Wedgwood & Co of Tunstall, Stoke-on-Trent. He was a distant cousin of the famous potter Josiah Wedgwood, of Josiah Wedgwood & Sons, but their two businesses were separate concerns.

Wedgwood & Co was renamed Enoch Wedgwood (Tunstall) Ltd in 1965 and in 1980 it was taken over by Josiah Wedgwood & Sons, who renamed it Unicorn Pottery. 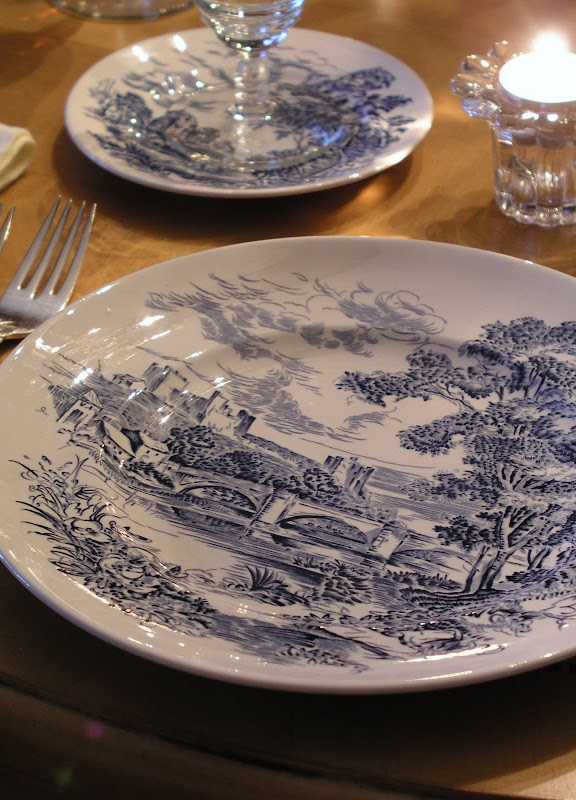 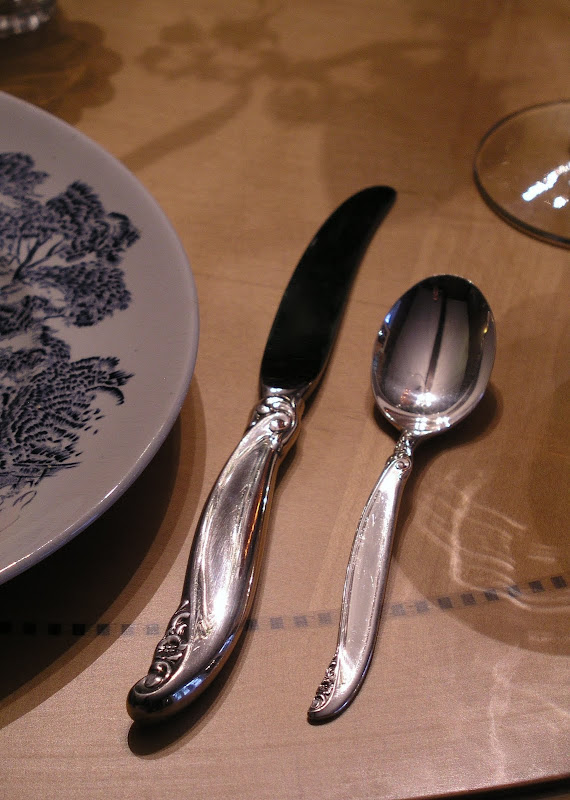 I'm sharing some recent Goodwill finds today. I couldn't believe my good fortune when I saw this elegant little glass bowl with silver overlay. I've purchased similar pieces at antiques shops and estate sales; I had never seen one priced at only $1.49! This one appears to be "Blossom Time."

Is it unseemly behavior to lunge for an item on a shelf in a thrift store? Perhaps, but I make no apologies! Don't we all love the thrill of the hunt? 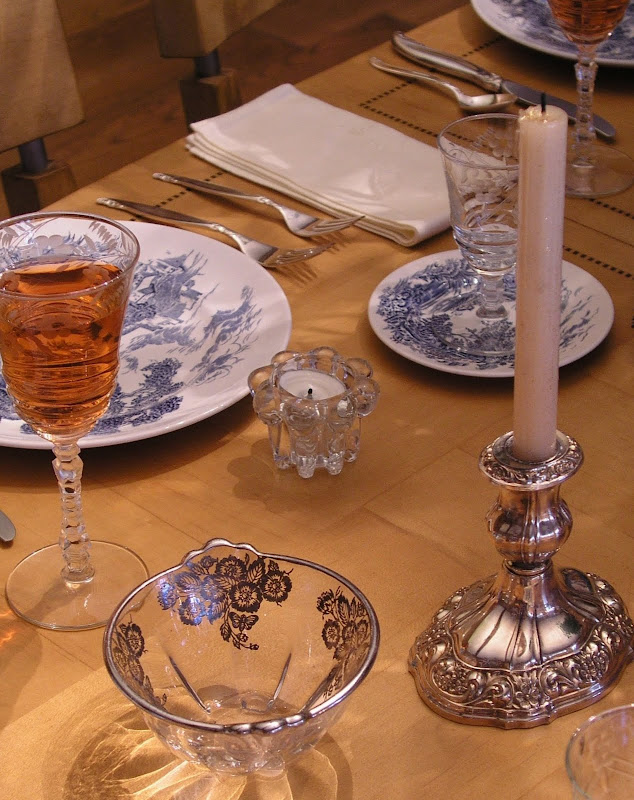 A few days later, at the same GW, I found the creamer and sugar bowl below. Forty-nine cents each, and in perfect condition! The sugar bowl still has the original manufacturer's sticker. It reads, "Sterling on Crystal. Non tarnishing." I researched the Silver City pattern, and it's called "Forest." 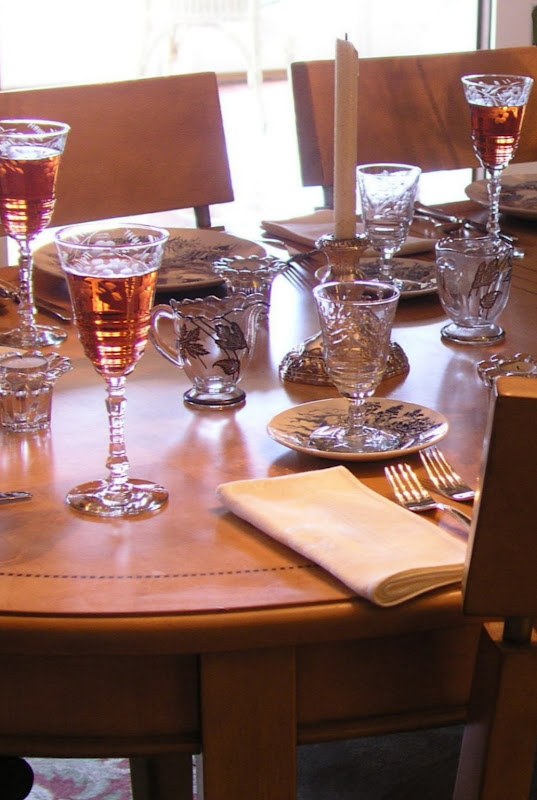 Here's information about silver overlay items from:
http://abesilverman.blogspot.com/2005/09/silver-deposit-glass-silver-overlay.html
and from:
http://www.silvercollection.it/dictionaryoverlayglass.html

Silver overlay glass has a design in silver "electroplated" onto the glass using one of several electrolytic techniques. Silver deposit glass was first made during the late nineteenth century. Solid sterling silver is applied to the glass by a chemical method so that a cutout design of silver metal appears against a clear or colored glass. It is sometimes called silver overlay.

Silver overlay glass was made in two distinct periods. The first was from about 1890 to the First World War. From 1895 to the late 1920s, this elegant and exciting manifestation of the glassmaker and silversmith's art garnered its own avid following, just short of becoming a decorative rage. Silver overlay and silver deposit were regarded as an exquisite, special gift or accent for that certain table or shelf. A few nice pieces of overlay were as evident in the genteel home as a piano in those days of refined, yet simple pleasures.

The Great Depression caused many of the glass companies to either go out of business or resort to specializing in cheaper, more affordable glassware. A revival followed immediately after World War II that lasted until the 1960s. For fashionable young couples getting married after World War II, this type of decoration raised the appreciation of any piece of glass from middling to marvelous.

Also from the Abe Silverman site:
“If you haven’t already inherited a piece of silver overlay glass, you’ve probably noticed examples when visiting elderly relatives or antique shops. As the parents of the baby boom generation continue to downsize and pass on to the next world, where material goods have no meaning (a concept I cannot yet fathom), lots of silver overlay glass is becoming available in the vintage marketplace.”

Below is a closer look at the centerpiece: 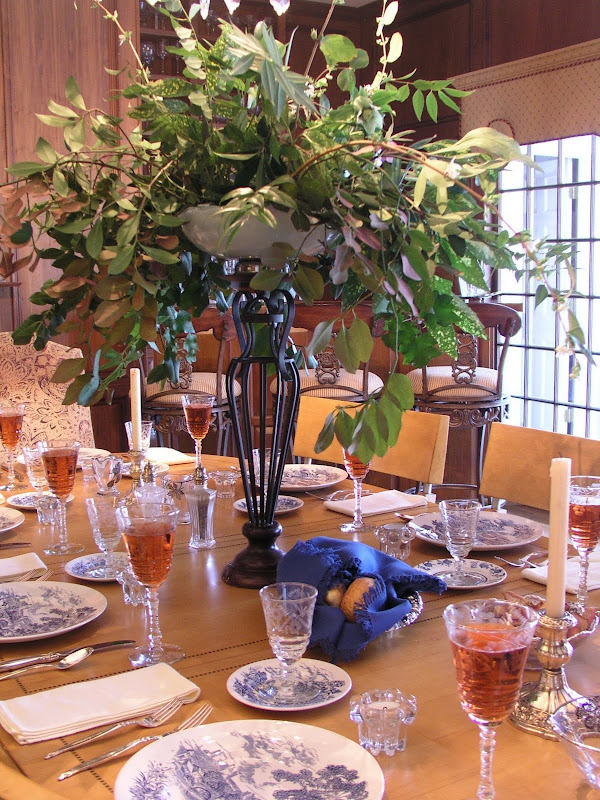 And closer still. I perched a thrifted glass bowl atop a wrought iron candleholder. The bowl has a hollow metal base that accomodates the spike (which normally secures a pillar candle). I placed a metal ring pan inside the bowl and filled it with wet floral foam. A few strips of Scotch tape across the top of the pan secured the foam in place. 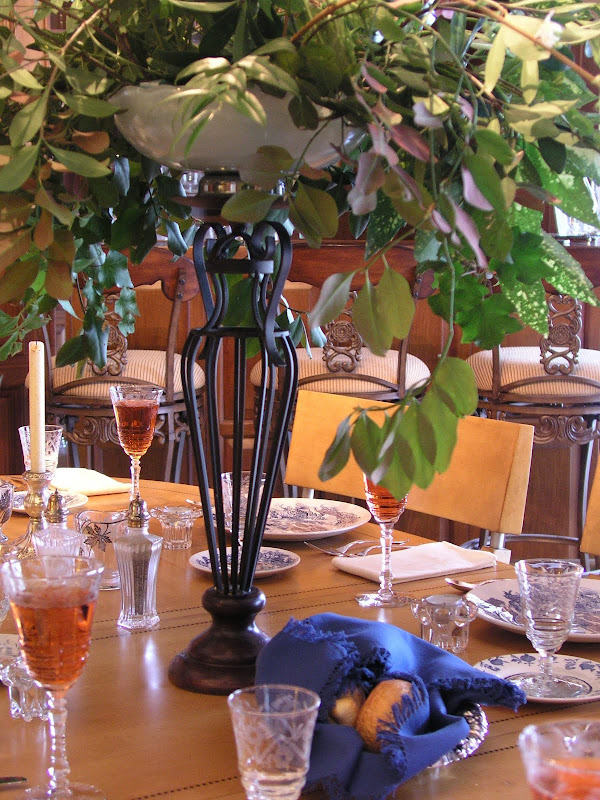 The free-flowing arrangement is mostly greenery trimmed from shrubs and vines in the garden. I also included early-blooming hellebores and wonderfully fragrant, but visually unassuming, winter honeysuckle. 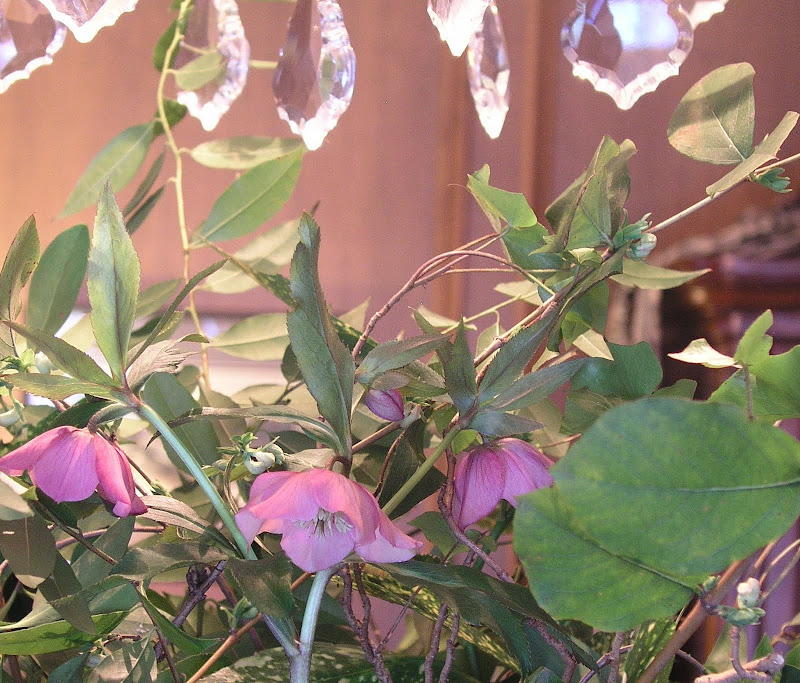 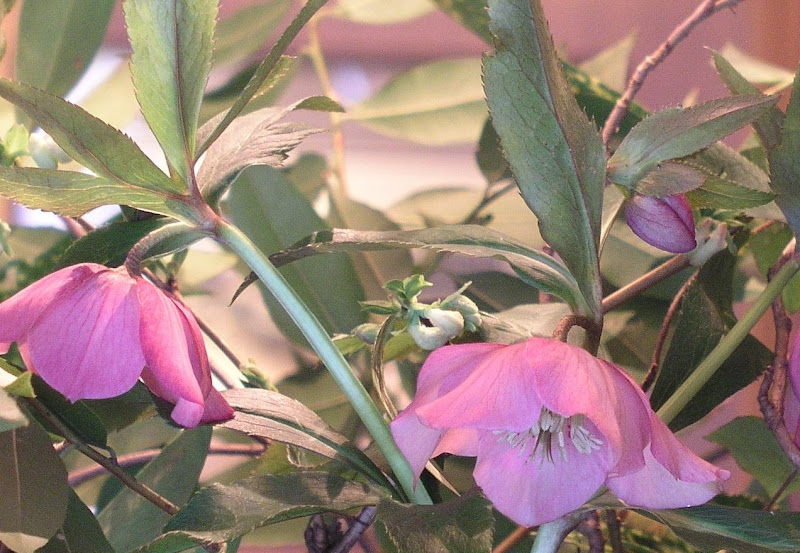 Candles add sparkle and warmth on an overcast afternoon ... 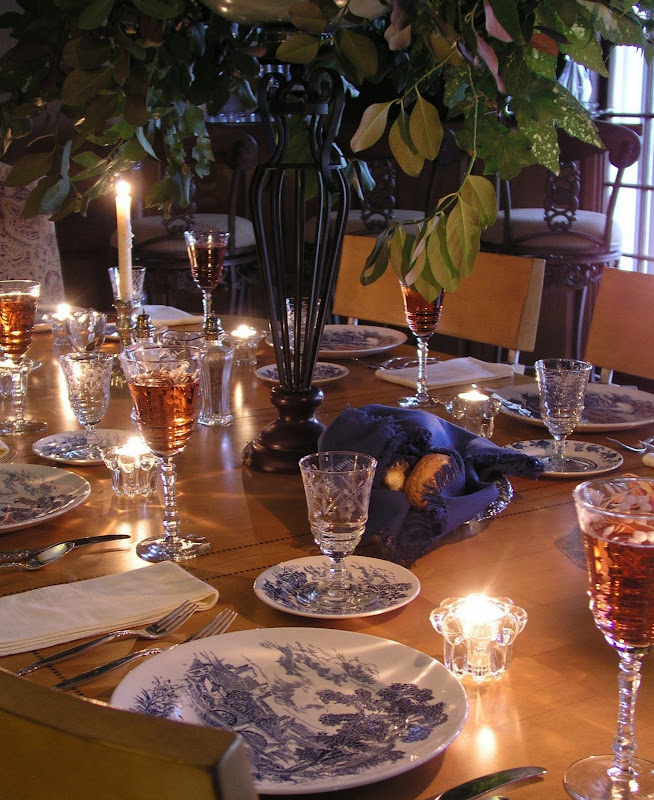 The vintage 1930s/40s stemware was etched and distributed by the Rock Sharpe Company on glass "blanks" produced by the Libbey Glass Company. The Poole console candlesholders were an estate sale find (very affordable!). They’re nice and heavy and have the look and feel of old family silver. 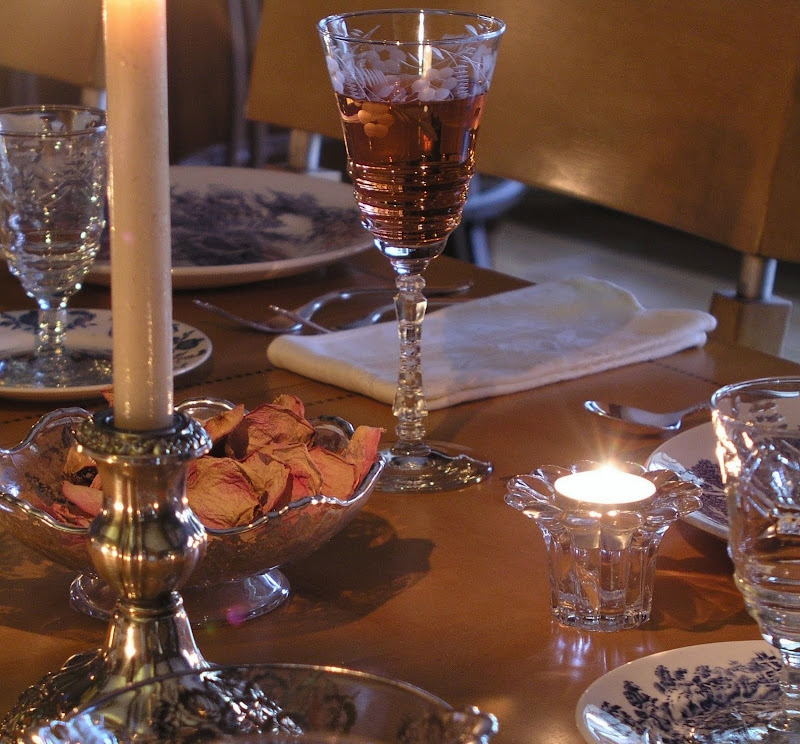 The Rock Sharpe stemware is sturdier than it appears. It has Libbey's patented safedge rims that reduce the liklihood of chipping. The smaller glasses were intended for juice, but work well for oyster/shrimp cocktail appetizers or for serving cool, refreshing mousse parfaits for a light dessert. 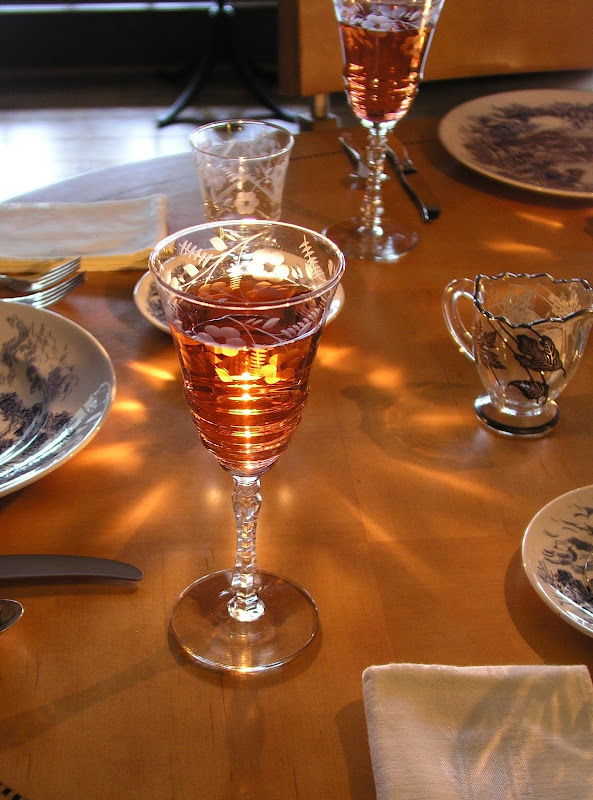 The vintage cloth napkins are from local estate sales. The Towle silverplated bread tray was another Goodwill find. 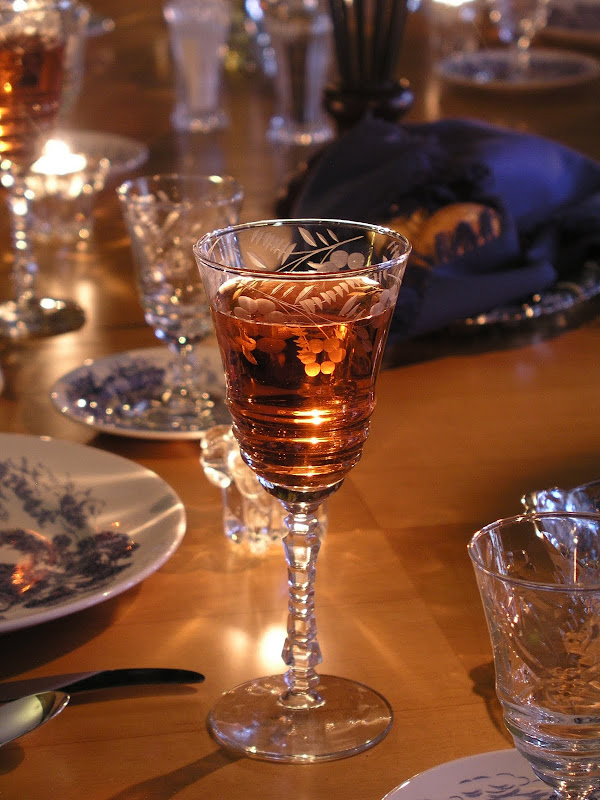 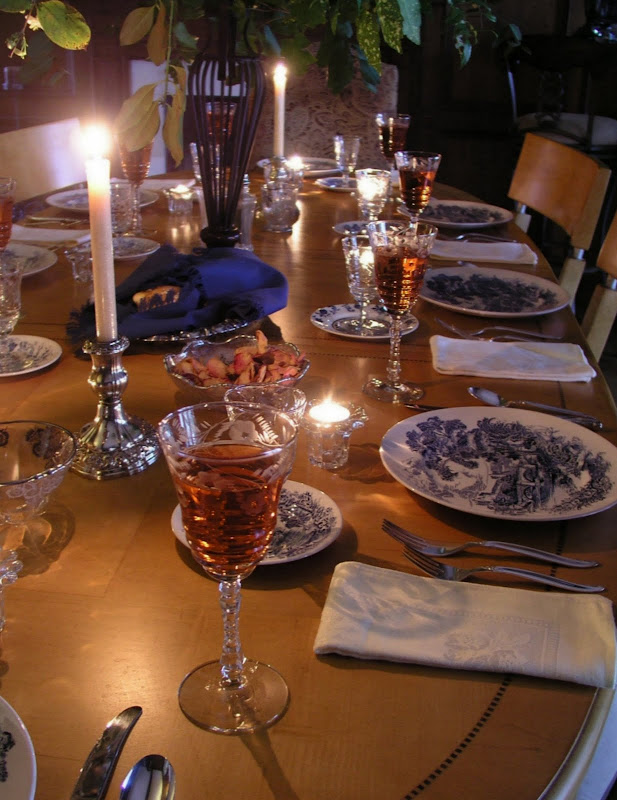 The centerpiece was inspired by a local (now retired) professor of art history and interior design. He used to joke that his "derangements" cost nothing to make, and he kept the university's shrubbery nicely pruned. I served on a committee with him and learned from watching him create the effect of exuberant opulence at minimal expense. Take a trusty pair of garden shears; add energy, effort, and intuition; and it can go a long way toward creating a festive ambience and a truly memorable evening. 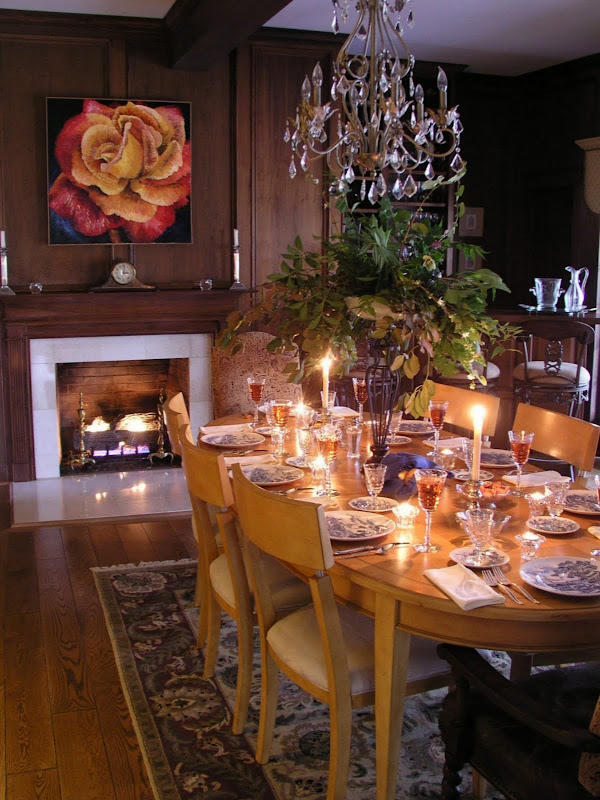 Just a few more words about the silver overlay pieces I shared today. The sugar/creamer and the bowl were decorated and sold by the Silver City Glass Company. The bowl's shape and the clarity reminded me of Duncan & Miller and Heisey products.

Here's information from the Heisey Collectors website:
Silver City Glass Company-This company in Meriden, CT operated 1905 to the 1980s. They applied silver and gold decorations on glass of most major glass companies of the period. Silver City used a store display and sticker showing "Sterling on Silver" on a blue background. Silver overlay with a flying bird and cattails was applied by this company on Heisey Lariat, Victorian, and other patterns.

Silver City glassware was considered expensive (by middle class standards), and it was sold in jewelry stores. Do you collect silver overlay glass? Did you inherit family pieces? I'd love to hear about your collections.

I hope you'll join Susan of Between Naps on the Porch for Tablescape Thursdays!