A Tropical Table and a Tribute

When the table seats eight, and it's dinner for seven, how does one avoid creating a visual void?

One solution might be to let the centerpiece become an "end piece." That's what I've done today. Well, naturally, I continued the design down the center of the table, but the emphasis is on the tall floral arrangement at the end. 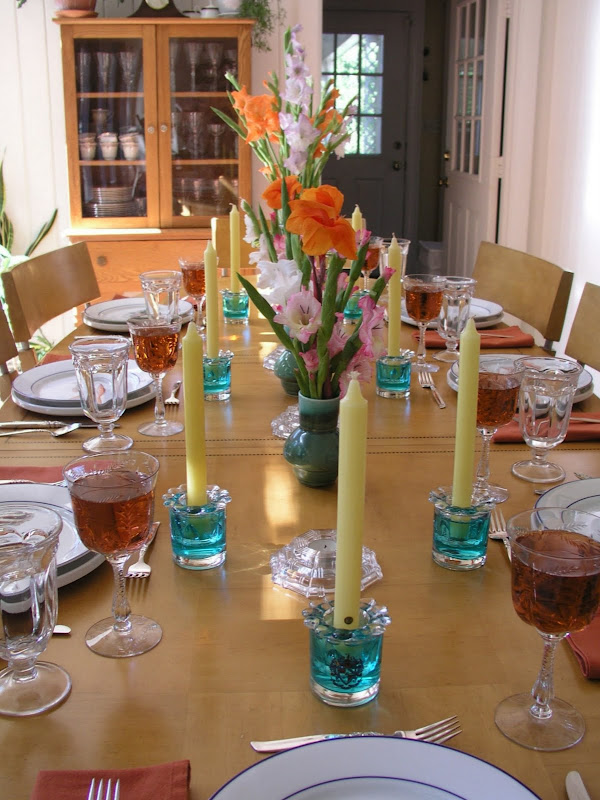 I wanted to create a relaxed, tropical mood in the sunroom. 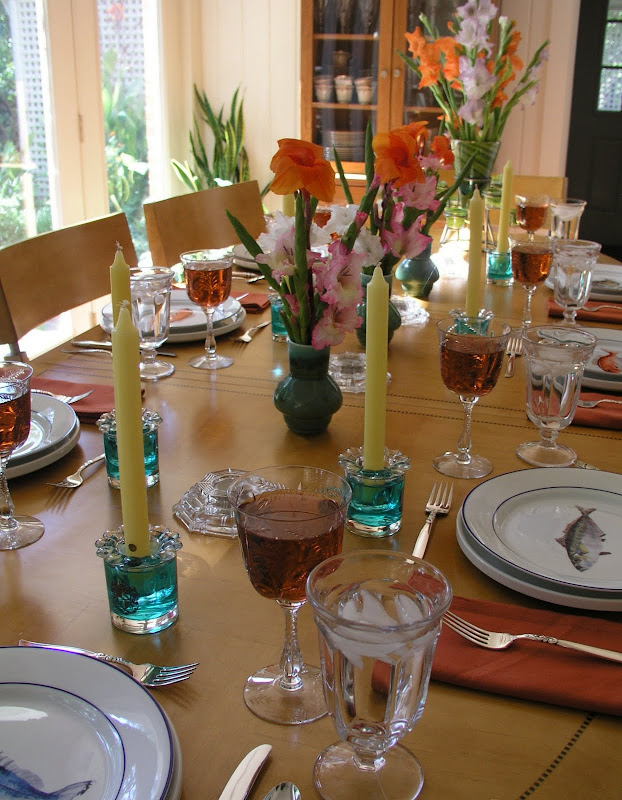 I tend not to create themed tables. I'm more inclined to mix a variety of vintage and modern pieces with the goal of creating an atmosphere or a feeling. 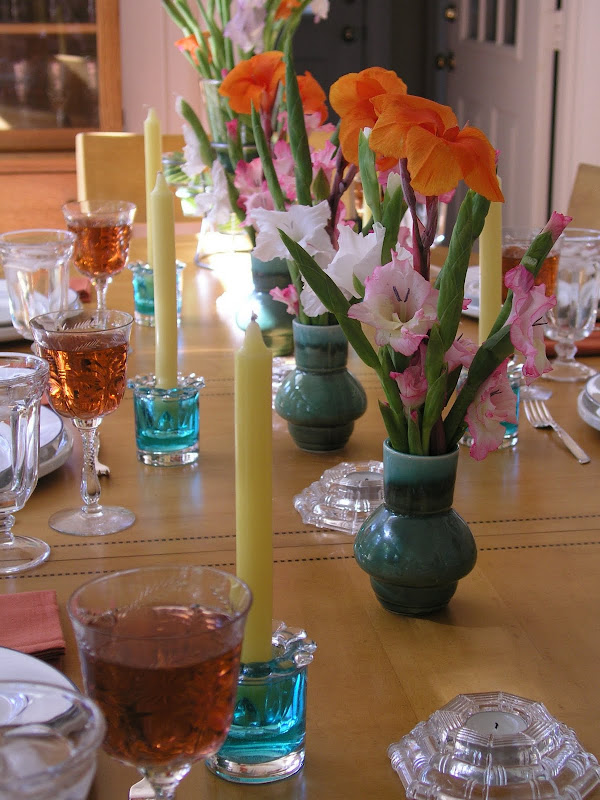 Plates with fish designs were used by the Greeks as far back as the 4th century BC. There's a long history of French Limoges plates featuring fish designs. Whenever I see them in antiques shops or at estate sales, they're always very expensive.

"South Seas" by Oneida (1955-65), one of my favorite vintage silverplate patterns, seems to me to be an appropriate dinner companion for the plates.

I wanted to keep the setting unfussy, so I left the table bare and added a bit of "lift" to the plates by placing them atop plain, rather chunky, dinner plates from Pottery Barn. 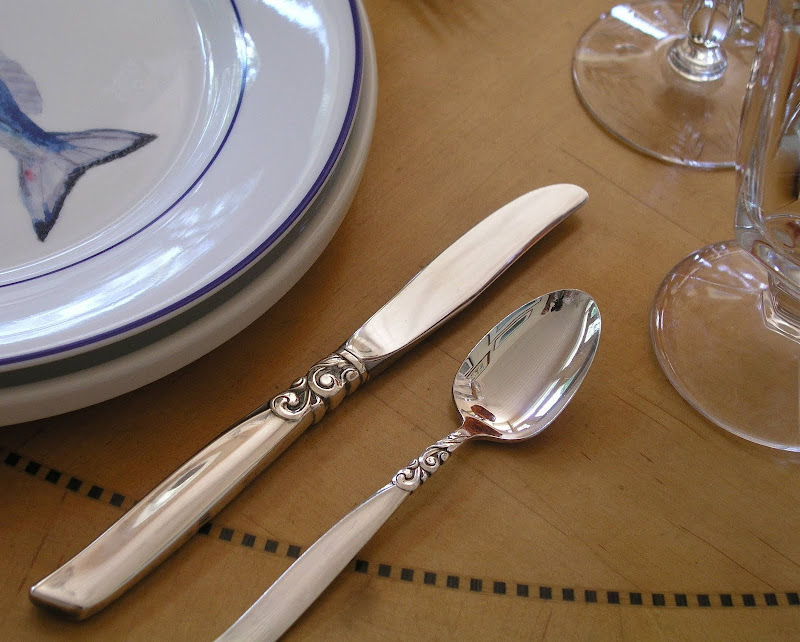 I'm using beautiful tapers by Colonial Candles in a soft, buttery yellow. I thought they might look nice in turquoise candleholders (of which I had none). I improvised by filling small glasses, probably intended for serving whiskey, with tinted water. Then I partially submerged clear glass candleholders in the water. Their flared rims held them in place.

The glasses were free at the end of a local estate sale. I was looking at them on an outside table, and the man said, "You can have them. Otherwise they're going in the trash." The candleholders, which I use frequently for tealights, were thrifted. I left the sticker on the candles to remind readers to check out the Colonial Candles website HERE. 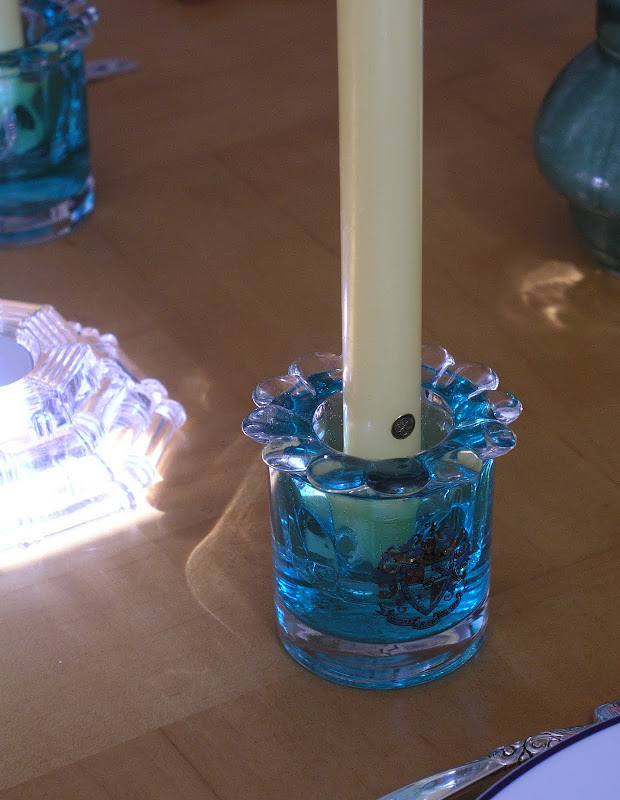 The glassware is vintage. The heavy, pressed glass stems I'm using for water were labeled Fostoria in a booth at a local antiques mall, where all the items are $3 each. I'm not sure if they're actually Fostoria, but they do have three seams (mold marks). Glasses that have only two are usually lesser imitations. 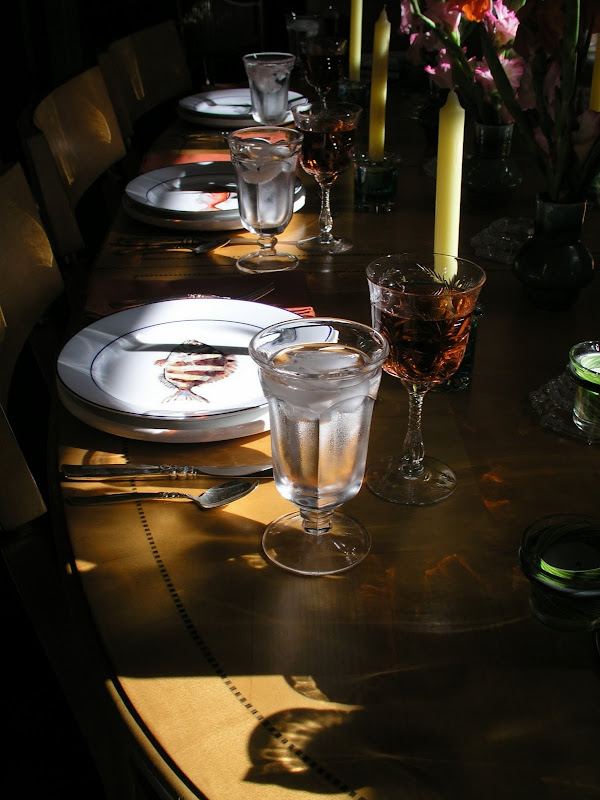 The tall wheel-cut stems came from a recent estate sale. At first I thought they were too fancy for today's table, but then I focused on the fern and flower design and decided they had an island feel. Mainly I just like the stems, the shape, and the sparkle they provide! 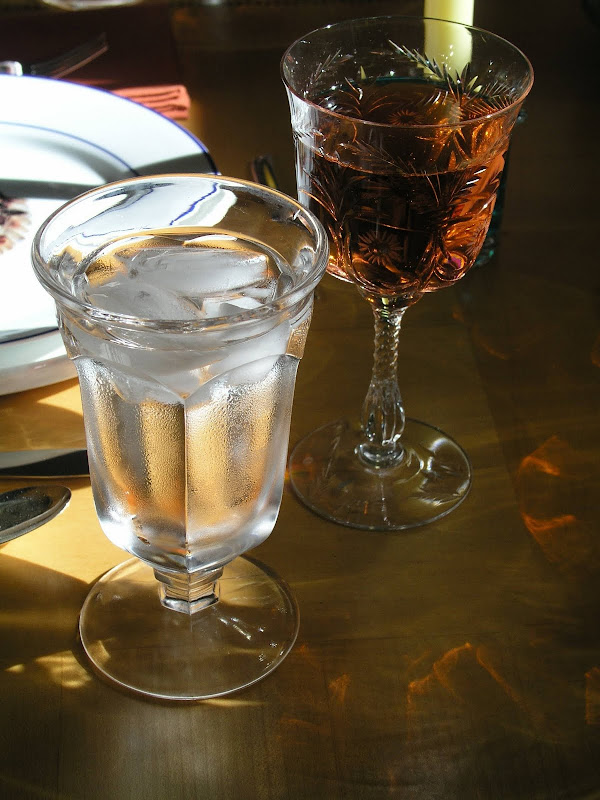 I'm using glads again. When the colors are this gorgeous, and the prices are so reasonable, they're difficult to resist. At only 99 cents per bundle, I splurged and bought three in assorted colors! 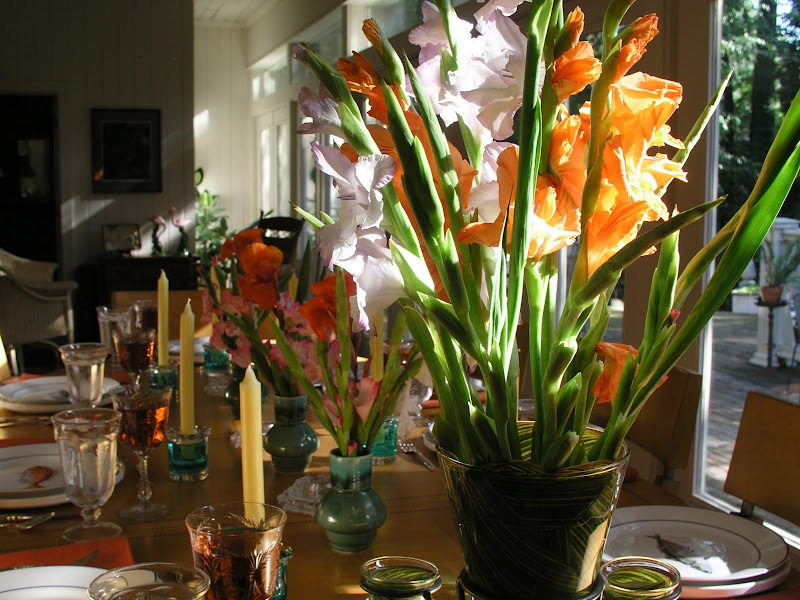 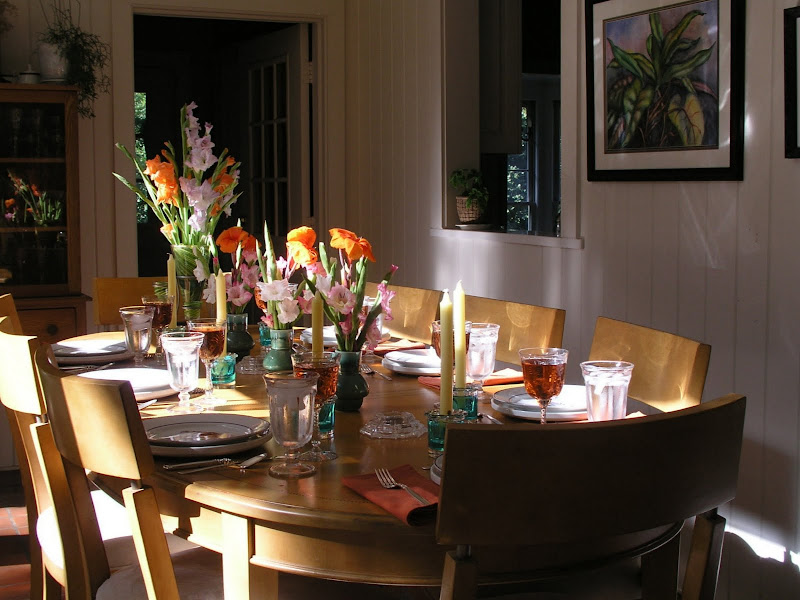 I love the ruffled edges of the blooms. 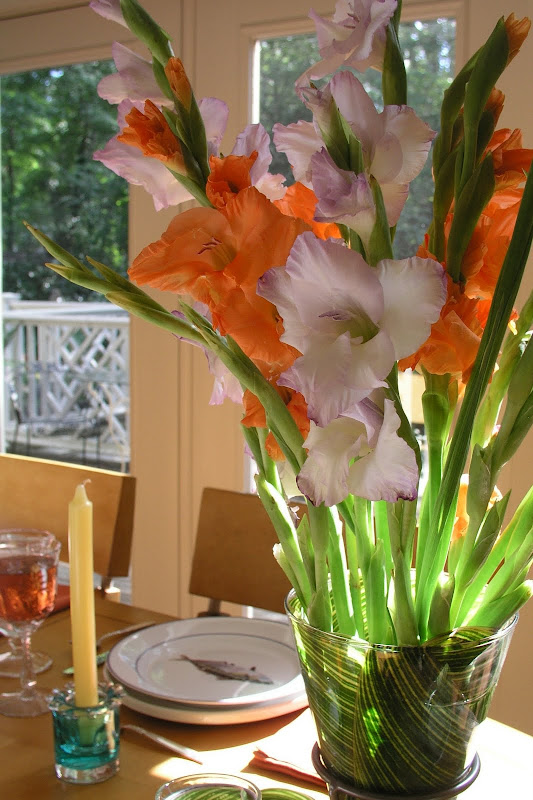 The three small bouquets are in vintage Japanese jars. Their ceramic stoppers have a layer of cork to help them seal, so I assume they were originally used for serving sake. I saw them at a local antiques mall (3 for $4!) and thought, "Vases." 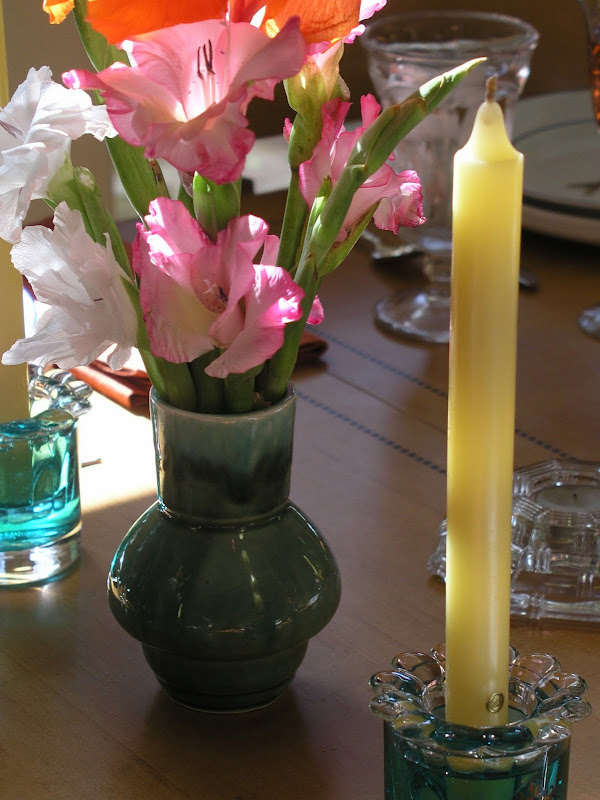 To move the bright orange color down the length of the table, I added blooms from the "Bengal Tiger" canna lilies in the garden. 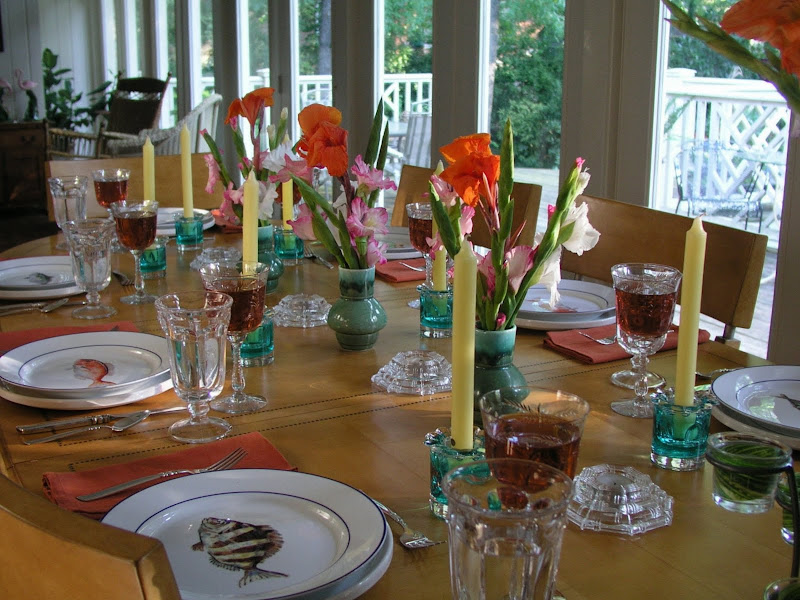 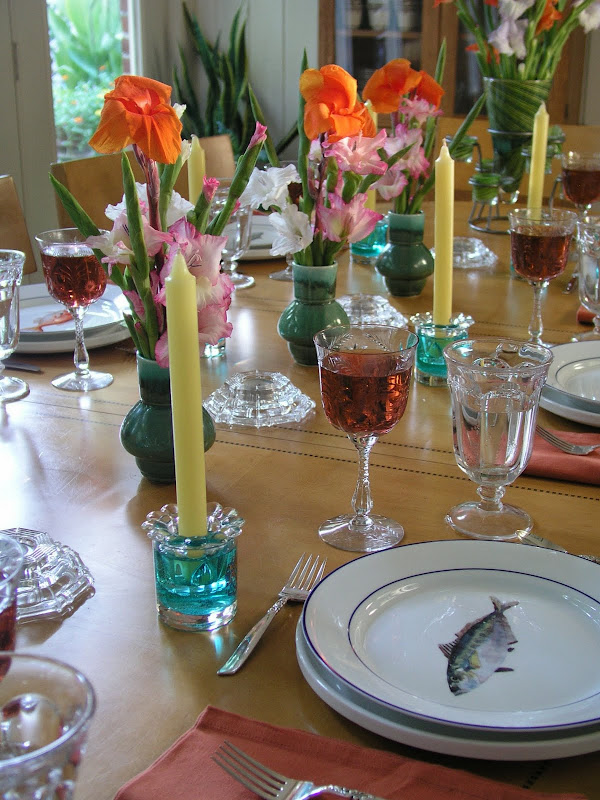 The "end piece" container was a Goodwill find. I lined the vase and the votive holders with "Bengal Tiger" canna leaves. Rather than cutting them perfectly to size, I let them be "expressive." Was it the correct choice? I don't know -- I tend to go with what feels right.

I added water to the candleholders and floated tealights in them. The water lifted the little candles and helped protect the leafy liners. 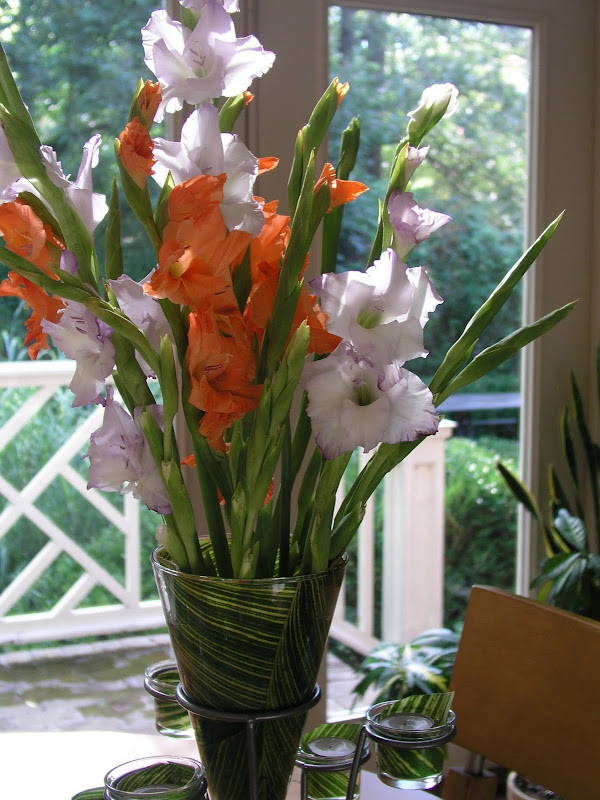 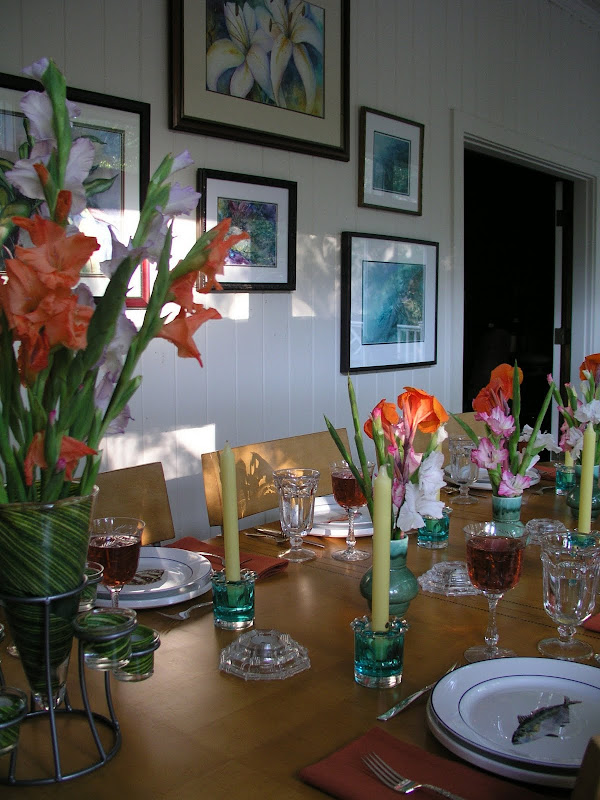 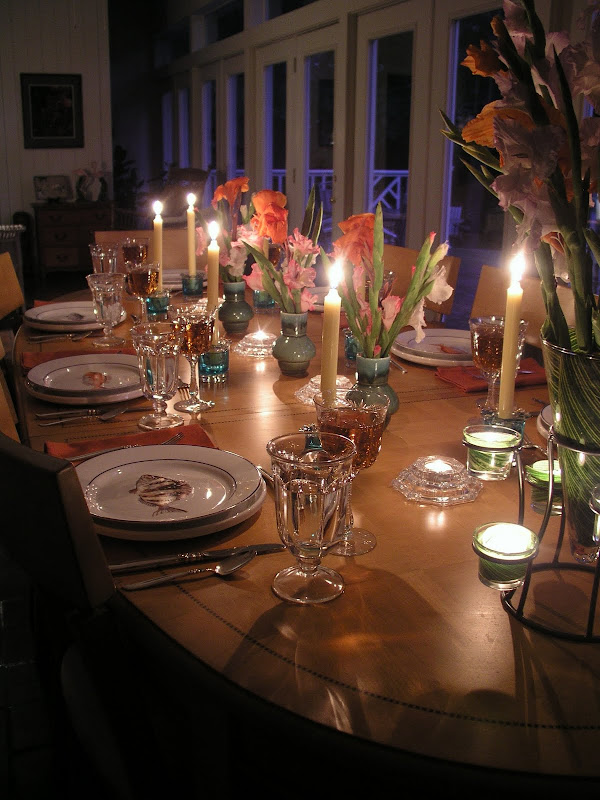 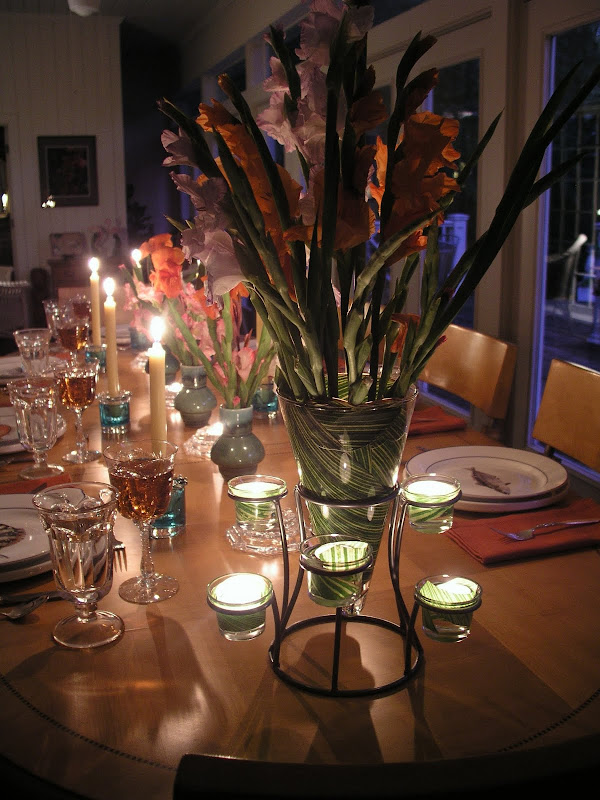 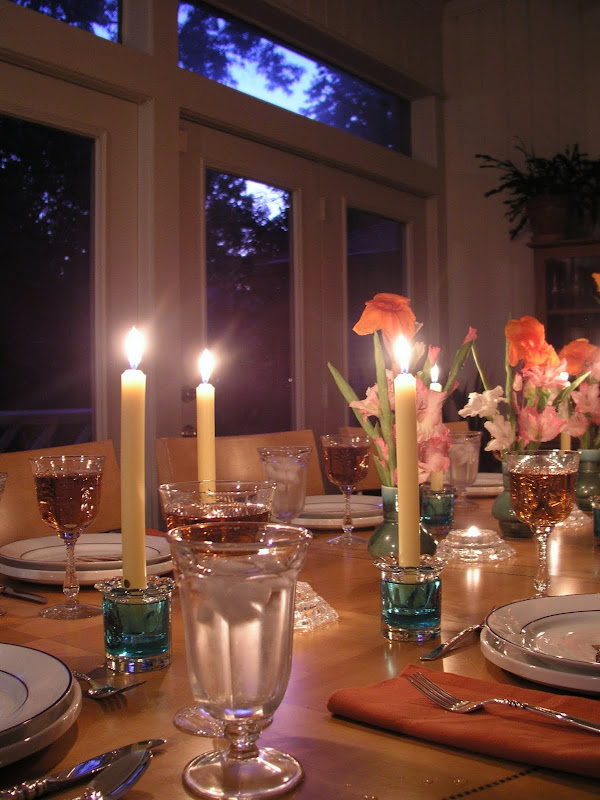 Perhaps I could serve salad on the fish plates and fish on the dinner plates below?

From Wikipedia regarding Graeco-Roman fish plates: "Some contend that fish plates were decorated with pictures of the seafood they were intended to hold. Most of them, however, have been found in mortuary contexts, so it might be surmised that the fish images could represent symbolic offerings for the dead." 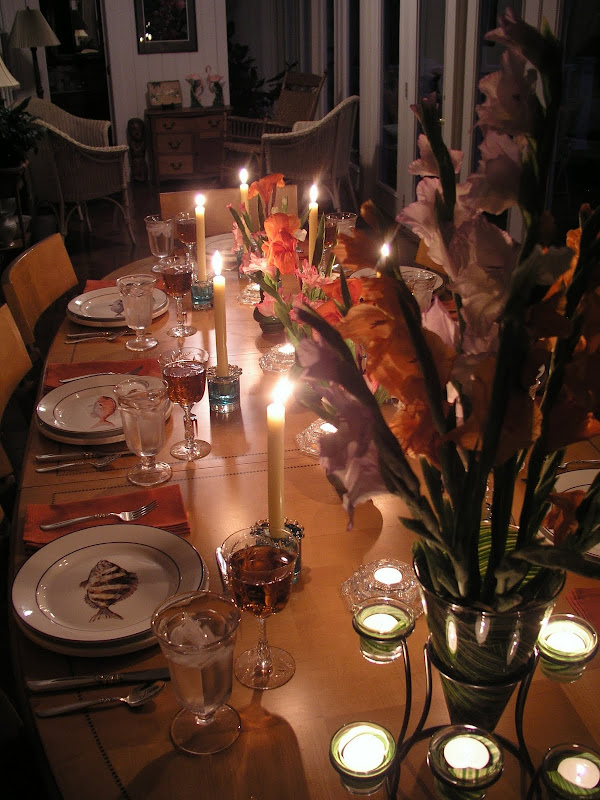 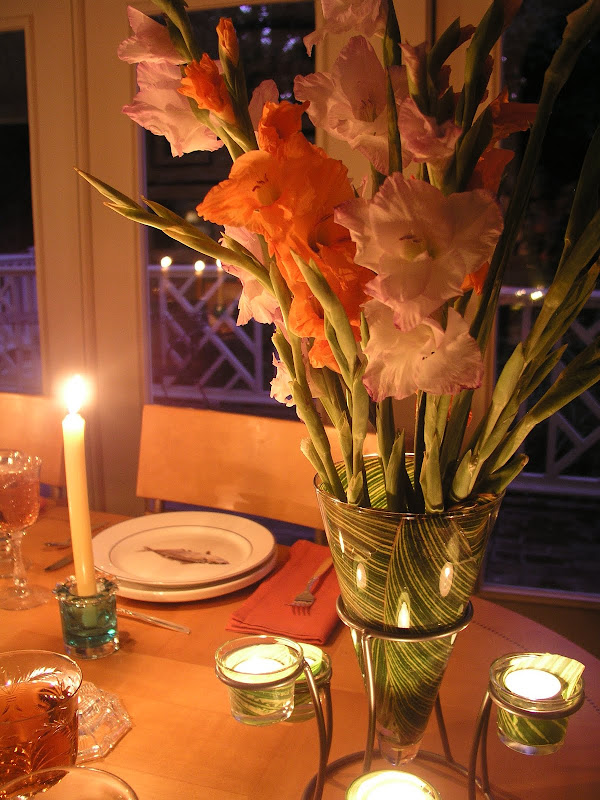 Do you like the idea of using a tall centerpiece at the end of the table? 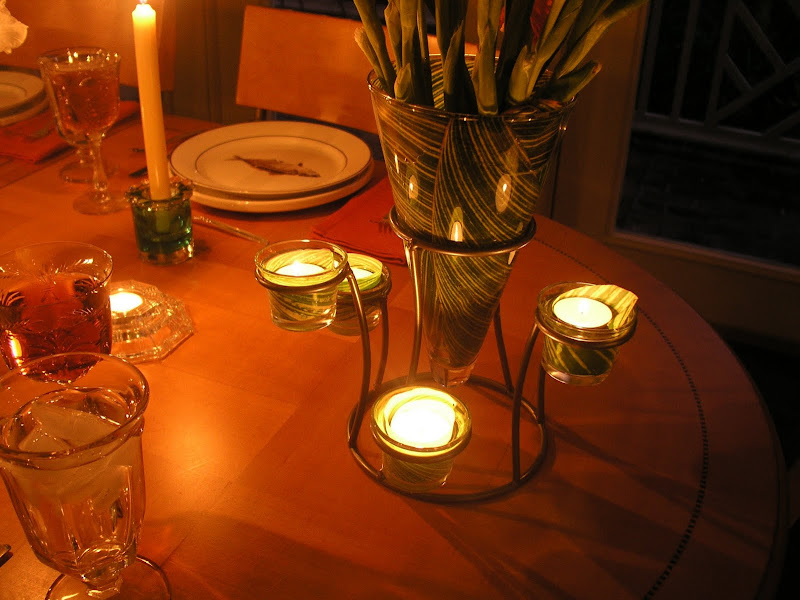 Canna blooms usually don't do well as cut flowers, but, if they're just opening, they can make it through at least one evening. 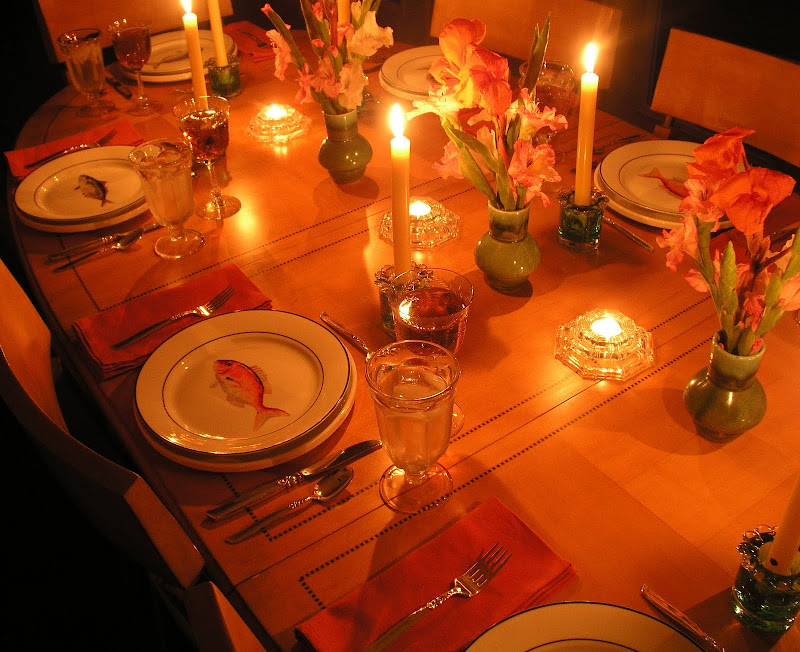 I think Marc Lacaze's designs are beautiful. From his blog:


"His work is a fascinating documentary of his travels, inspired by the sensory exploration of these places, in the Romantic tradition.

His work has been published by a variety of international magazines and book publishers. In the U.S, his work appeared in Travel & Leisure Magazine consistently for 7 years. Other magazines include Le monde, Geo, Food & Wine, Town & Country, and Regal... His has worked with publishers Gallimard, and le Cherche midi. Business clients include le Club Med, Frequence plus, Hennessy, Accor, and BNP...

For several years, Lacaze has worked on exclusive collection pieces for Williams-Sonoma, one of America’s largest consumer retail companies for tabletop and housewares." 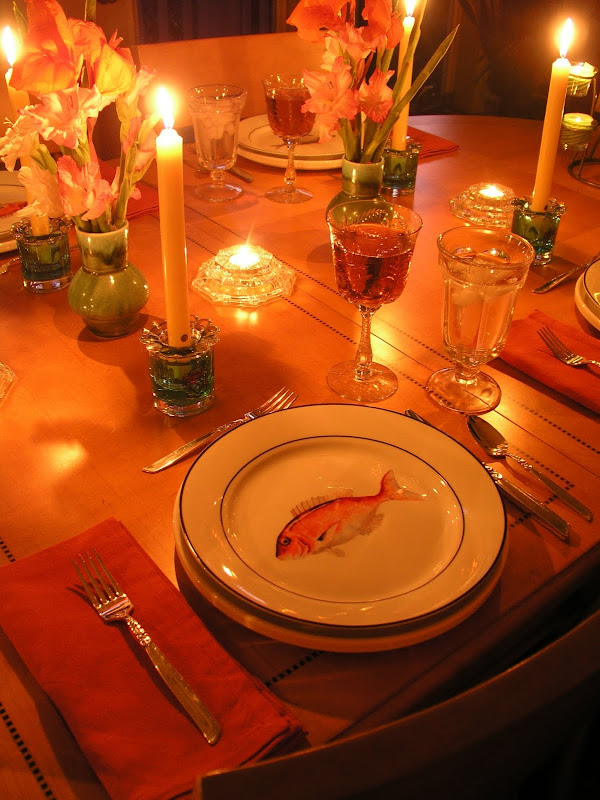 As I was working on this post, I was saddened to learn that Marc Lacaze died unexpectely on August 9, 2011, and his funeral was today in Paris. HERE's a post about it at Journey Jottings. 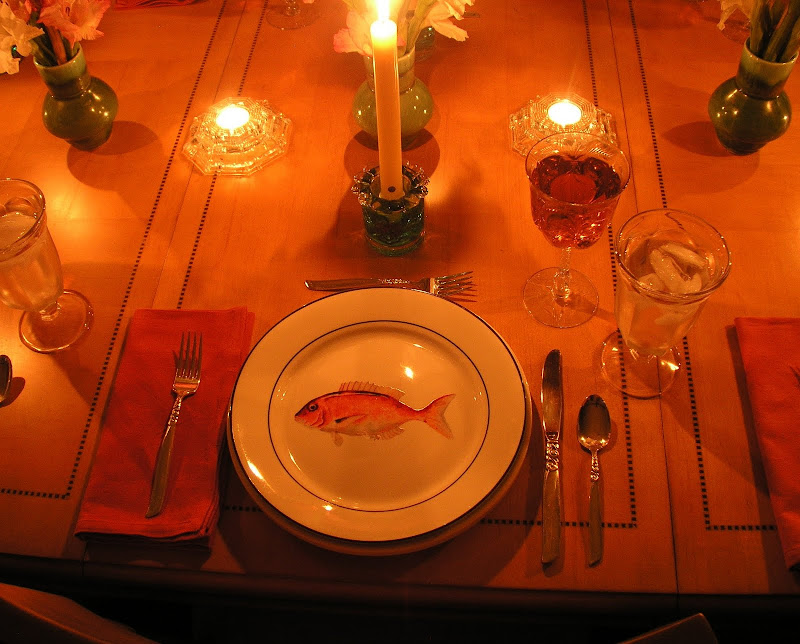 A short video from an interview in 2010:

Let's drink a toast to a talented artist, who did beautiful work and brought the world happiness and inspiration. 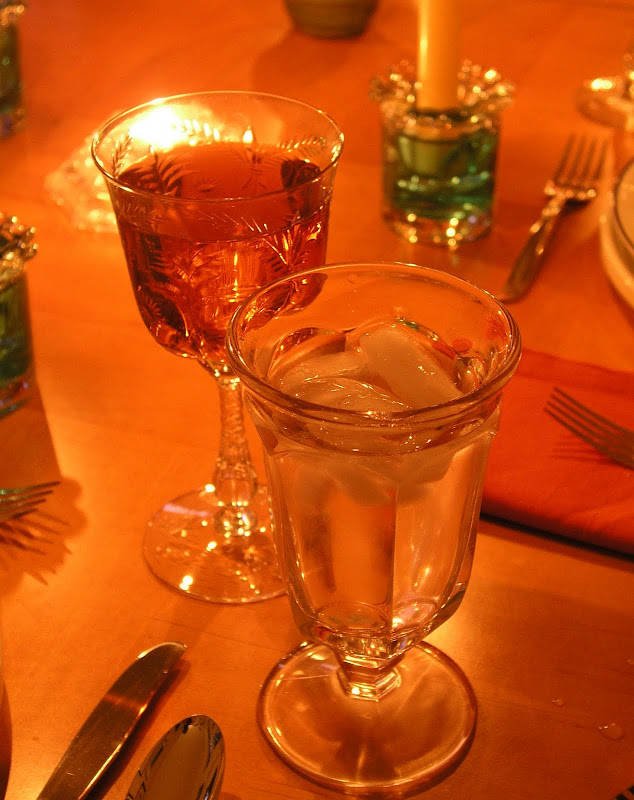 Please join Susan of Between Naps on the Porch for Tablescape Thursday.