Well, perhaps “love” is too strong a word, but I do like Lenox china very much. Very much!

From the Lenox website:
“For 90 years, Lenox has created fine china dinnerware for the White House, the vice president’s official residence, over 300 U.S. embassies, and more than half of the governors’ mansions. Lenox became the first American china to be used in the White House in 1918 when President Woodrow Wilson commissioned the company to create a 1,700-piece service bearing the presidential seal in raised gold. Over the years, Lenox has created new state services for five additional presidents – Franklin D. Roosevelt, Harry S. Truman, Ronald Reagan, Bill Clinton, and George W. Bush”

This is what I consider my primary set of dishes, a discontinued pattern from the Lenox Presidential Series called “Monroe.” It’s a service for 12+, and I have quite a few of the serving pieces. I like the creamy color and the simple maroon and gold geometric border. However, I thought it might be nice to add variety by sometimes replacing the salad plate with an accent plate. That seems to be a popular trend in table setting. 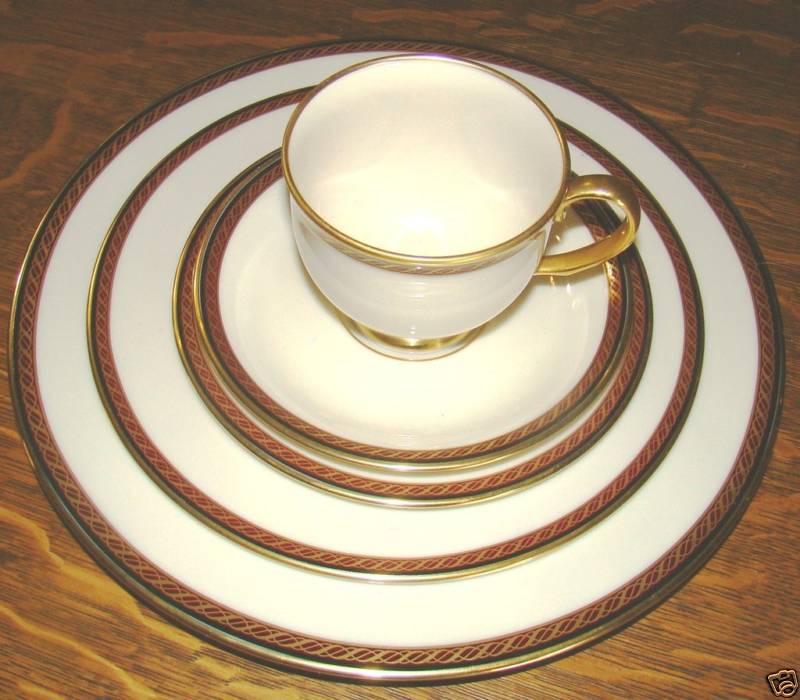 I found one I liked at a local department store: the Lenox Eternal accent plate. It was on sale for around $30, but some quick mental arithmetic told me it would be a rather expensive proposition to purchase 12 of them. Besides, I often prefer vintage items for both the look and the feeling of history and continuity they “bring to the table.” 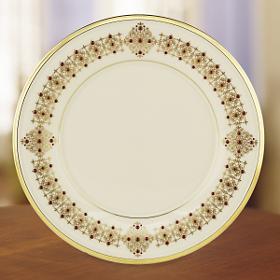 Through eBay searches, I discovered a pattern I liked called Essex Maroon. It was manufactured from 1938 – ’78.

I always enjoy seeing the artwork and reading the florid prose used in Mid-Twentieth Century advertising. Here’s a vintage ad from 1951.

Ad quote: For beauty famous the world over, Lenox. For you, beautiful Essex Maroon. The richness of 24 kt. gold scrolls and glowing maroon in a superb traditional pattern, one that will bring grace and loveliness to your home for generations to come.

Another ad read: For US Embassies the world over, Lenox Maroon. For you, Lenox Essex Maroon.

I bought a few pieces to try mixing with the Monroe dishes. I liked the look and watched for a larger set to become available. Soon one did … from an estate in Boston. The condition was perfect (possibly unused). I negotiated a “Buy-it-now” price (quite a bit less than the Eternal accent plates alone would have cost).
Thank goodness the seller purchased insurance, because this is what I received: 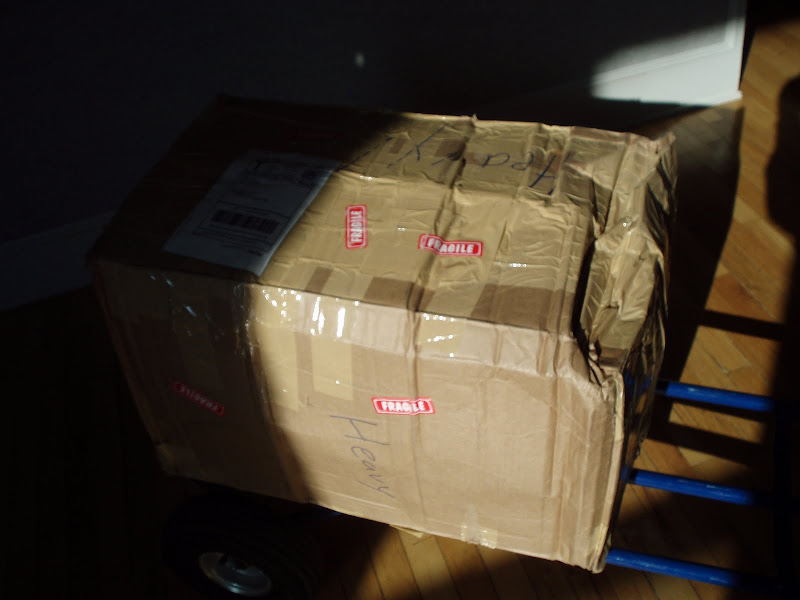 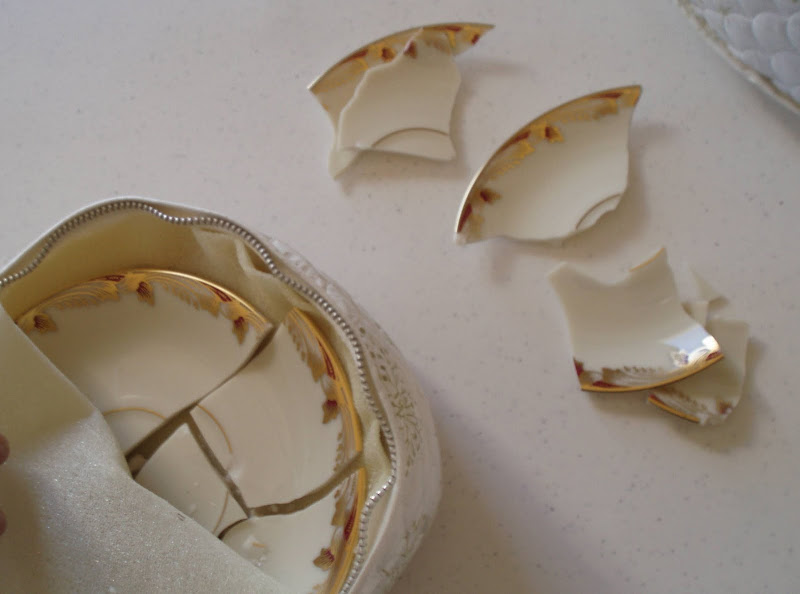 They were packed in their zippered vinyl storage cases. They’re fine for keeping dust off, but not great as packing material. However, everything other than the saucers arrived intact. 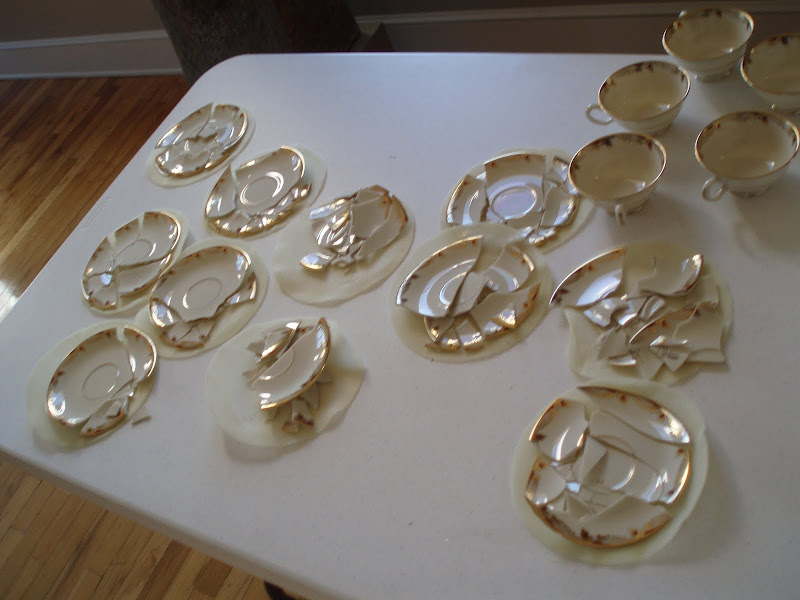 I filed an insurance claim with the Post Office. It took a while, because the amount of the claim prevented it from being handled locally. It seemed at first that I might not be able to file a claim at all, because the quality of the packaging was questioned. I think the local Postal workers took pity on me (I wasn’t crying, but I felt like it!). 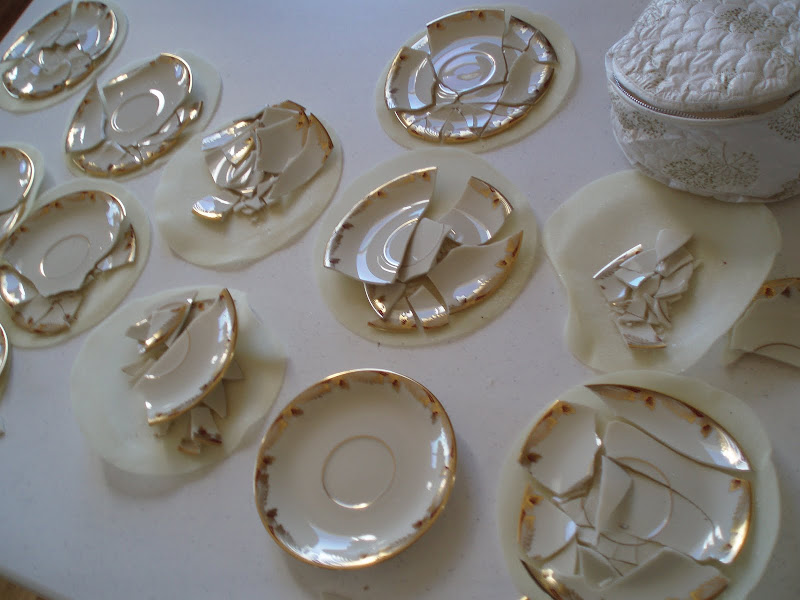 Weeks later, I received a check. I found replacement saucers a few at a time. There was frustration involved. Some of the saucers were marked “Lenox, Made expressly for Ovington’s.” I now know that Ovington’s was an exclusive gift shop on Fifth Avenue in New York. I didn’t mind the backstamp, but I wasn’t pleased that two of the saucers had rim chips. Many e-mails ensued, negotiations, partial refunds. It’s a long story, but I finally have enough saucers (some came with cups, so it didn’t come out even). 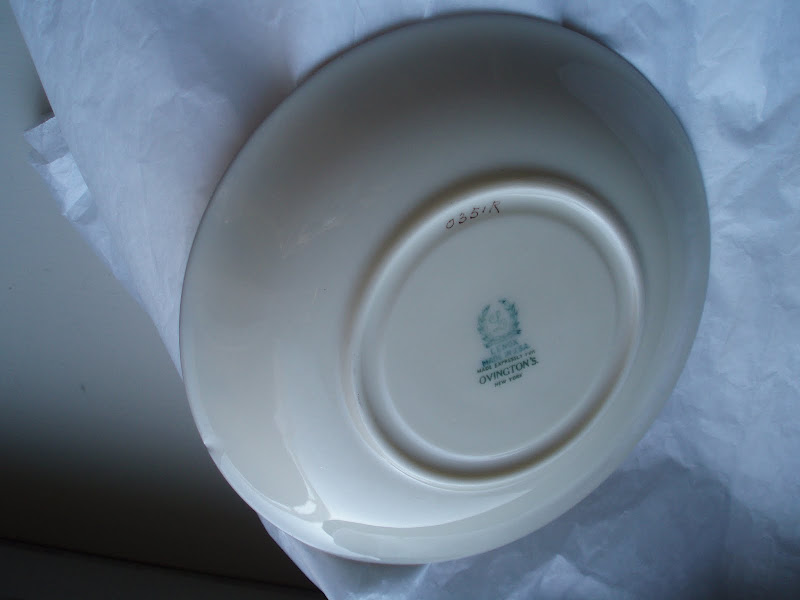 Anyway … moral of the story?
If you purchase fragile items online, insist that the seller NOT use Parcel Post. Priority Mail usually costs only slightly more. I’ve been told that Priority packages are handled with greater care and make far fewer stops along the way. Always buy the insurance. However, that does no good if items aren’t packaged to the satisfaction of the Post Office. Look at feedback for the sellers, paying particular attention to comments on how well items were packed.

What about you ... have you heard the dreaded "rattle of death" when you received a package containing fragile items? Sadly, this isn't the only time I've experienced it. It's never fun.

I think I’ll set a table for you with my Lenox dishes. Would you like that?