It's time for another Tablescape Thursday with our hostess, Susan at Between Naps on the Porch!

Thank you to those of you who have left such generous and thoughtful comments for me during the past few weeks. I haven't had time to visit nearly as many of you as I'd like to lately. I hope you'll be patient and know I'll stop by when I can.

First of all, I'd like to congratulate Maria of Chica Bella Crafts. She's the winner of the April Cornell napkin giveaway. I copied and pasted links to the Google profiles of everyone who left comments on my "Day into Evening" table with April Cornell post. If you missed it, you can see it HERE. I pasted the links twice for followers, and three times for e-mail subscribers. Then I numbered the list in a Word document and used an online random number generator to find the number that matched one of the links that led me to Maria's blog.

I'm sharing a post I did not long after I began blogging last year. Since there are several newer followers since then, I hoped some of you might not have seen it. I hope you enjoy ....

It had rained here all night, so it was too wet to set a table for you outside. I've already "done" the dining room and breakfast nook ... so I decided to set a table that's not a table.

Here's the result, a breakfast bar ... well, a setting for breakfast ON the bar: 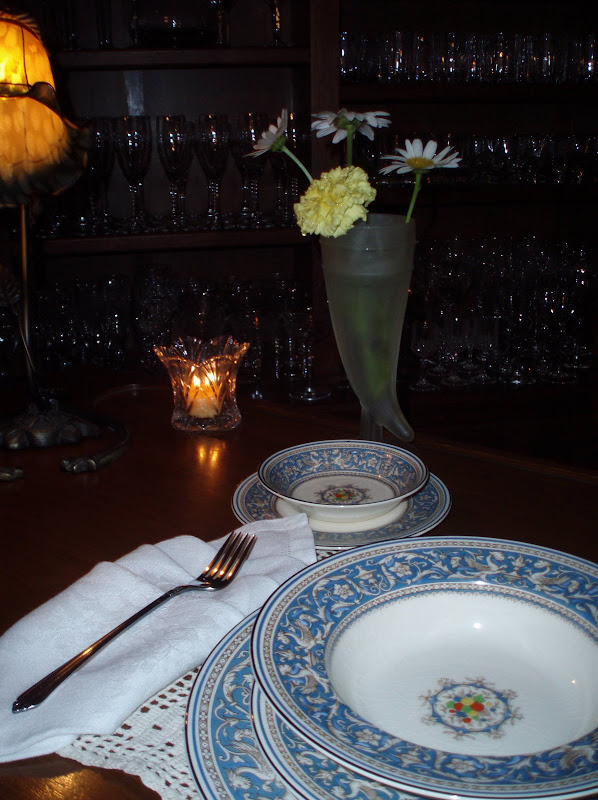 It was light outside ... around 7am, but a few candles always enhance the mood. 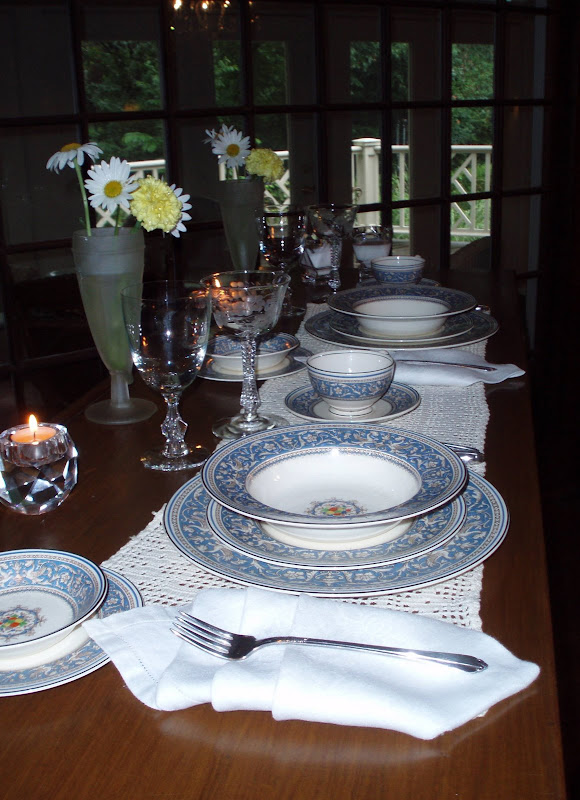 These are some of my favorite dishes, "Medici" by Myott/Staffordshire. They're very similar to a pattern by another English company, "Florentine" by Wedgwood. Wedgewood introduced "Florentine" in 1931, and it's still an active pattern. The primary difference is that the raised enameling in the center of "Florentine" depicts flowers, rather than fruit ... and it retails for $400 for a 5-piece place setting! I found 40 pieces of "Medici" at a local antique mall for $100 (after a bit of negotiating). A fire destroyed Myott's records and pattern books, so not much is known about dates, etc. of many of their patterns.

These dishes are definitely old, and there's some "crazing" (the slight crackle you can see in the glaze if you look closely), but I don't mind that they've been used and obviously loved. For me, it adds to the interest and reminds us that the pieces have a history. 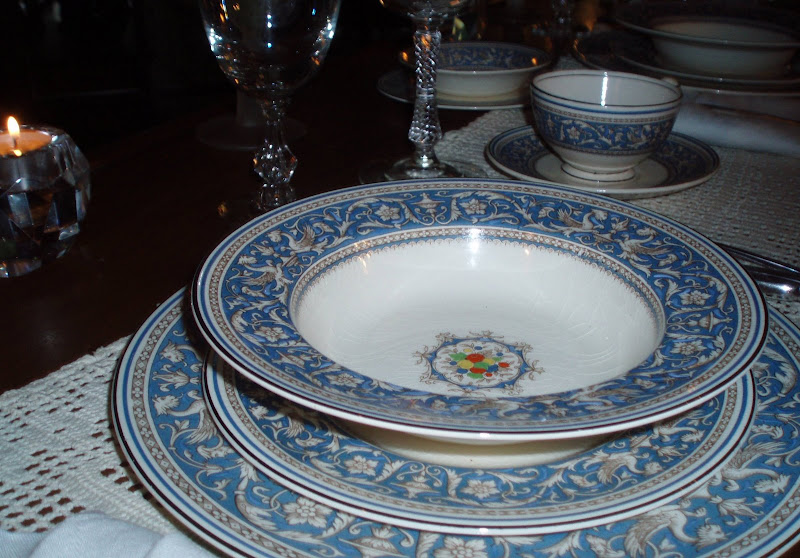 The silverplated flatware is by Rogers. The pattern is: Starlight / Hostess / Claridge. I have no idea why it's listed under so many names, but I like the simplicity and the art deco influence.

You'll notice that the handles are longer-than-average on the forks and knives. That was popular during the 1930's and 40's. It's called the "viande" or "grille" style. It reflects deco styling; the idea was that it would be an ergonomic design well-suited to cutting and eating steak, etc. (viande is French for meat). It seems that grilling became popular during that era. I think it was primarily seen as being something new and stylish ... a marketing concept. I happen to like the proportions ... that's probably why long-handled iced tea spoons and seafood forks appeal to me visually. 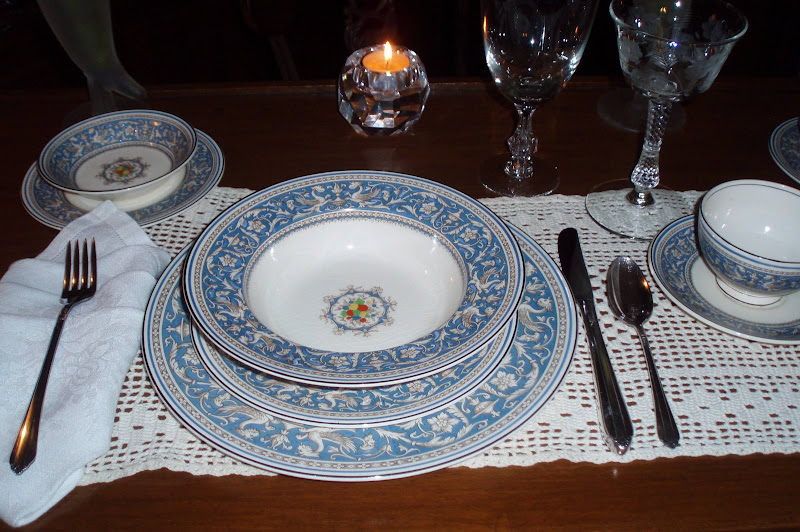 The "placemat for two" is a hand-crocheted runner from an estate sale. It cost $1. 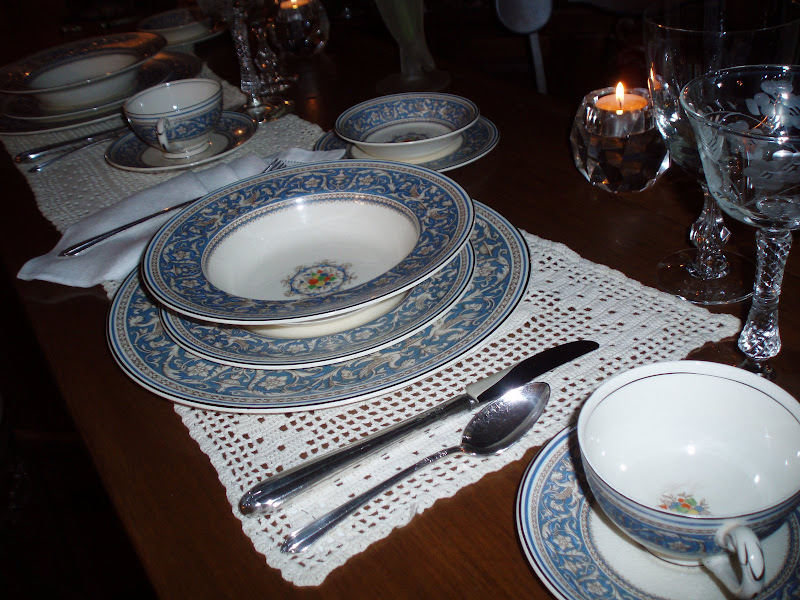 You can see some of the glassware I've been collecting in the background. 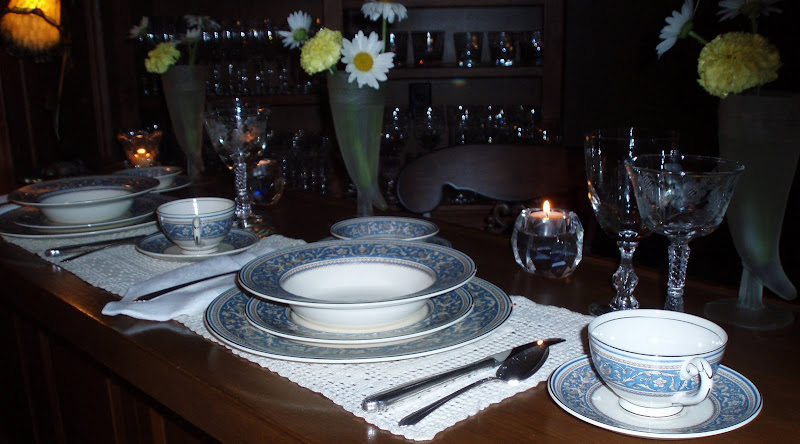 I had planned to use these vases for roses, but the rose garden took a beating during all the heavy rain. I looked around, and the marigolds were standing proudly. Somehow though, it seemed that single marigolds looked lonely in the containers. The daisies had also survived the rain intact, so I snipped a few of those. Actually, some of the ones pictured here were used in last week's tablescapes ... they're definitely durable flowers!

The "vases" are vintage frosted hunting horn-shaped pilsner glasses by Tiara. They were a Goodwill find at $.99 each. A well-known replacement service lists them for $13.99 each. 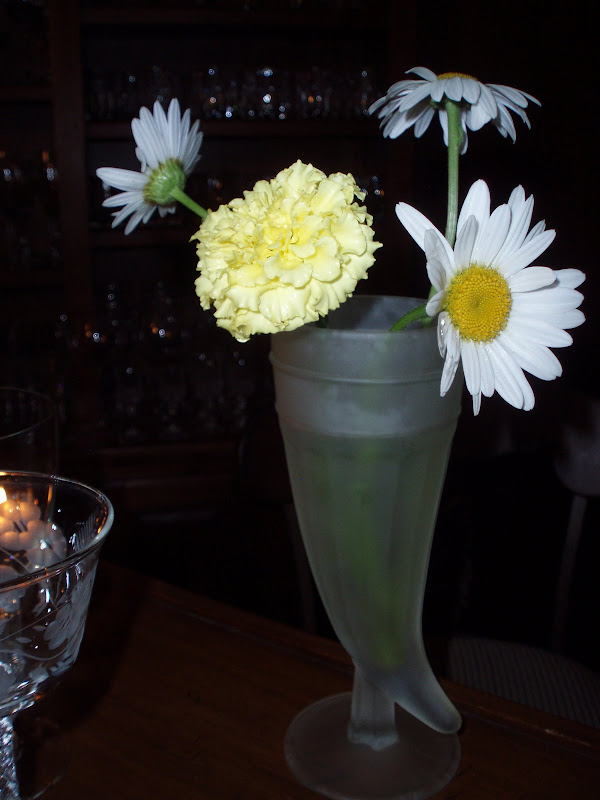 I decided to use tall sherbet/champagne glasses for juice. This is a Rock Sharpe pattern. I really like the sparkly stems. The water glass is from the mid 1950's. It's "Tempo" by Heisey. They're very nice quality (comparable to Fostoria). I found them at an estate sale (covered with dust on an outside table) priced at 3 for $2.50. It was the second day of the sale, so I offered $1 for the set ... offer accepted! I have a fairly large set of the same stem with an etched pattern -- that's how I knew they were Heisey when I spotted them at the sale. 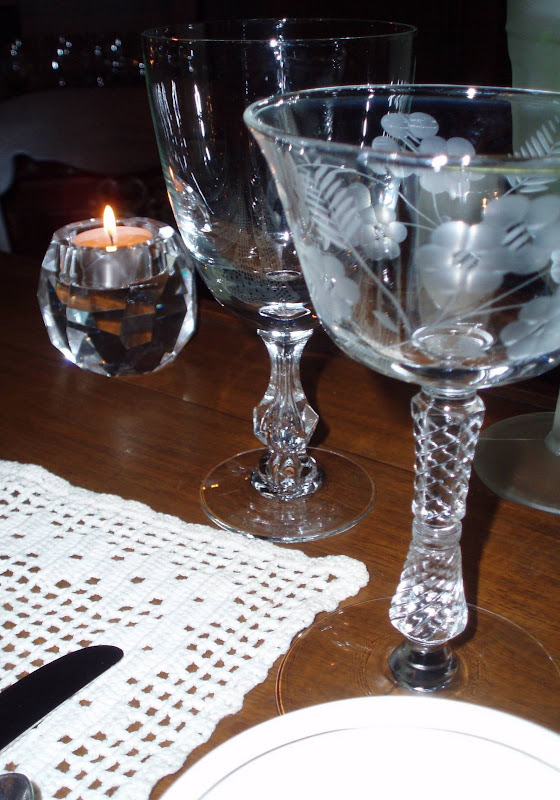 A close up of the etch/cutting on the Rock Sharpe stems. They're probably from the late 1930's. I paid $12 for ten at a local antique mall (after chatting with the dealer who was in her booth that day). They had been priced at $22, which was already a great price. Since I know she likes to negotiate, I figured it wouldn't hurt to offer less. Prices often depends on how much the dealers have invested in the pieces, whether the rent is due, if they're overstocked, etc. It definitely pays to be polite, and it's never a good idea to offer an insultingly low amount. 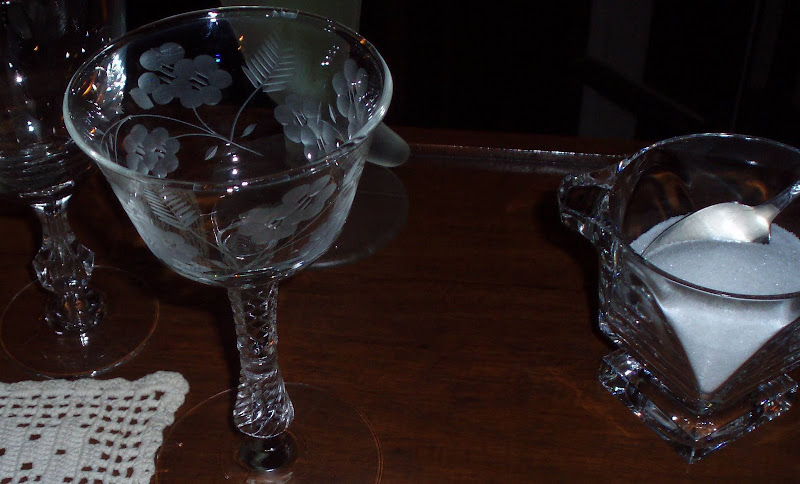 I think the simple lines of the sugar bowl and creamer have a deco influence. The're a 1970's pattern by Fostoria called "Transition." One of the pieces still had the original Fostoria label ... I removed it today just for you! I bought the set at a salvage store in Illinois for $4. 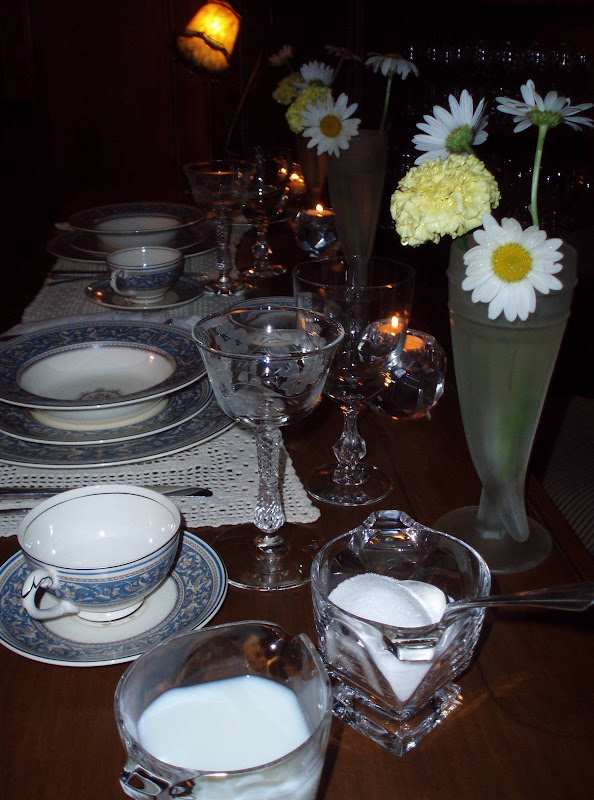 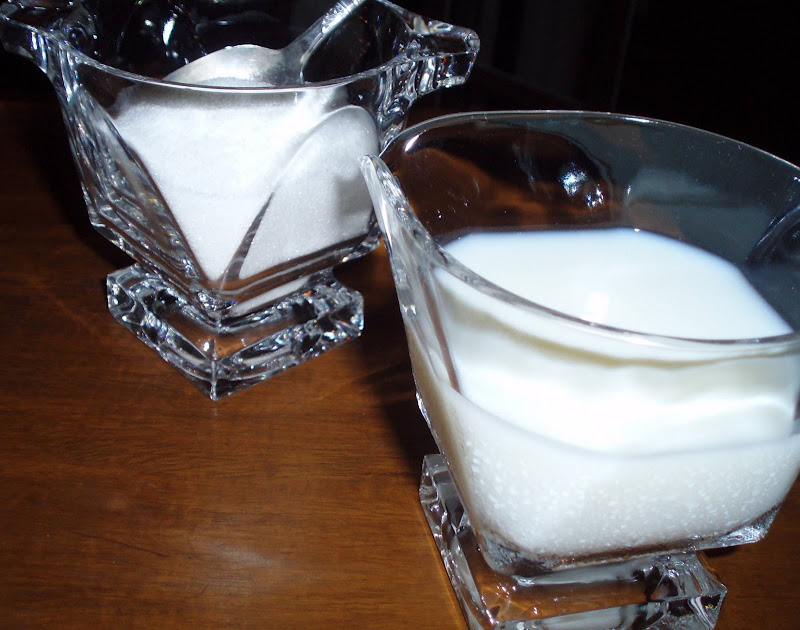 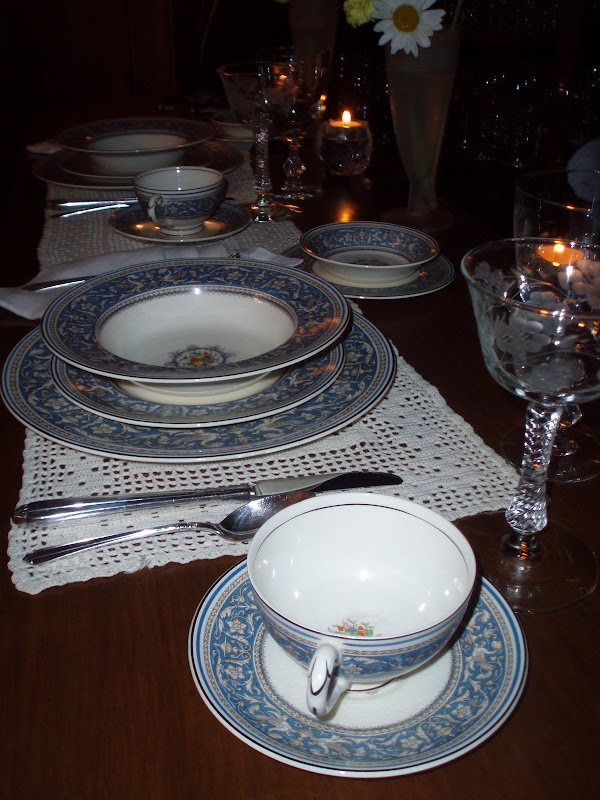