A Cactus on the Table??? And a Giveaway!

An online dictionary offers "trappings" as a synonym for accoutrements and gives the following examples: cathedral ceilings, heated swimming pools, and other accoutrements signaling great wealth. Items I've shared through posts to Affordable Accoutrements definitely don't relate to "great wealth," but I hope readers have found them interesting and helpful in some way. Estate sales have been the primary source for tabletop items I've featured ... along with thrift stores and online auctions.

Today I've set a table for four in the breakfast nook. This particular setting will definitely rank among the most affordable I've shared with you to date. We'll start with the centerpiece. The holiday cactus in the solarium is in bloom. In case you're interested in Latin names of plants, holiday cacti, commonly knows as the Thanksgiving Cactus, Christmas Cactus, and Easter Cactus, comprise several closely related species in the genus Schlumbergera and the species Hatiora gaertneri. I always find it fascinating when any type of cactus blooms. It seems somehow incongruous that something so colorful, delicate, and beautiful can burst forth from a plant that's normally harsh, spiny, and tough looking. And the cactus was free, a gift from a friend! She was about to throw it away ... I'm glad she didn't!

I folded a wet paper towel and placed it in the bottom of a silverplated Revere bowl (to minimize chances of the bowl being scratched by the clay pot) and camouflaged the pot by filling the space between the bowl and pot with greenery from the garden. The roses from last week's tablescape still appeared to have some life in them, so I cut the stems short and inserted them into the moist soil to provide additional color and act as a filler flower. The Revere bowl was a recent Goodwill purchase. At $1.99, I didn't hesitate. It was tarnished, but the plating appeared smooth and intact (no rough or green spots to indicate plate loss). It polished up beautifully with my favorite silver polish, Wright's Silver Cream. 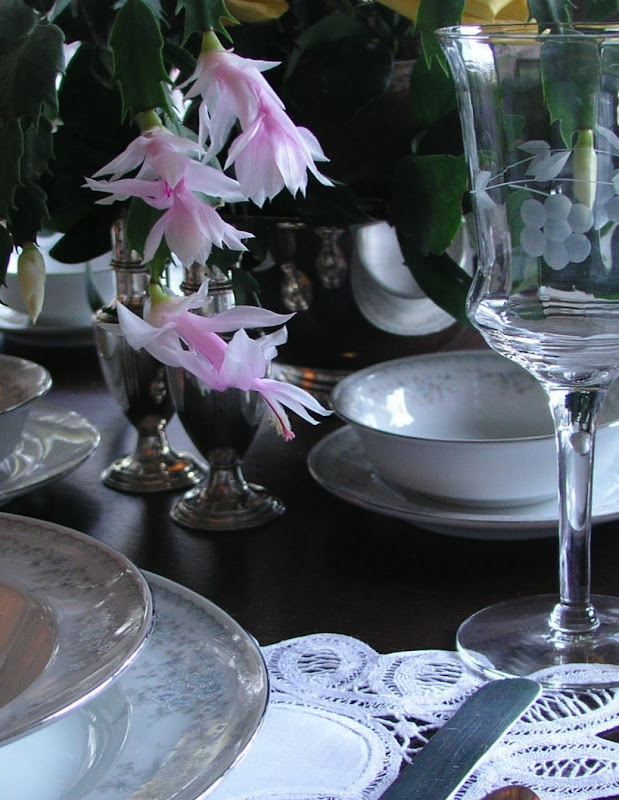 In setting the table, I used mostly silverplated items, along with a few sterling silver pieces. The candlesticks are plated. They were on sale at a local antique mall, reduced from $24.50 to $4.50 for the pair. They're a nice heavy weight and in perfect condition. The creamer, open sugar, tongs, and salt & pepper shakers are sterling, estate sale bargains (the vintage creamer and open sugar totaled only $15). 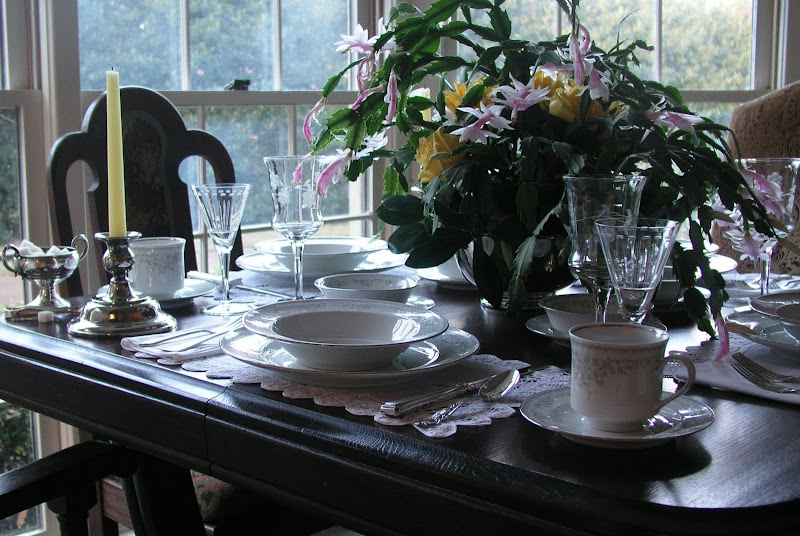 The glassware is vintage. 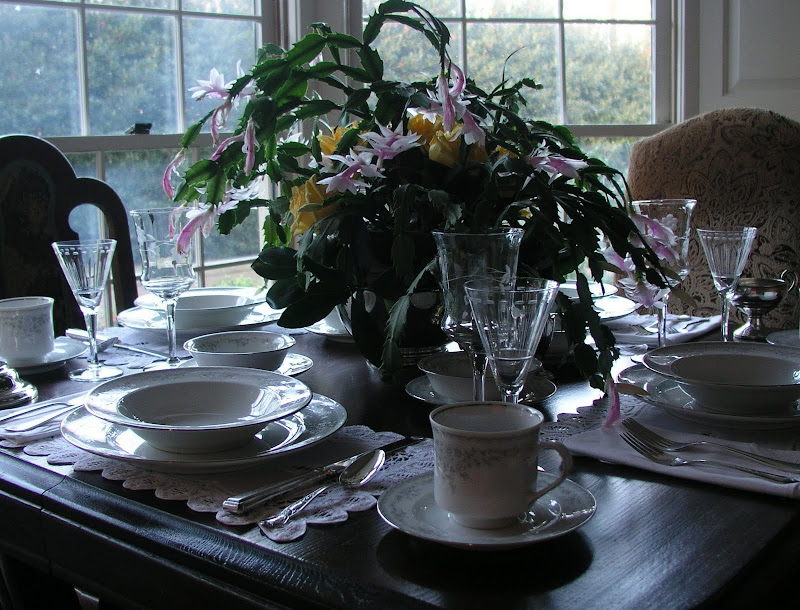 When I poured milk (not cream) into the cream pitcher, it formed a few bubbles. I thought it might be fun to capture them in a photograph. 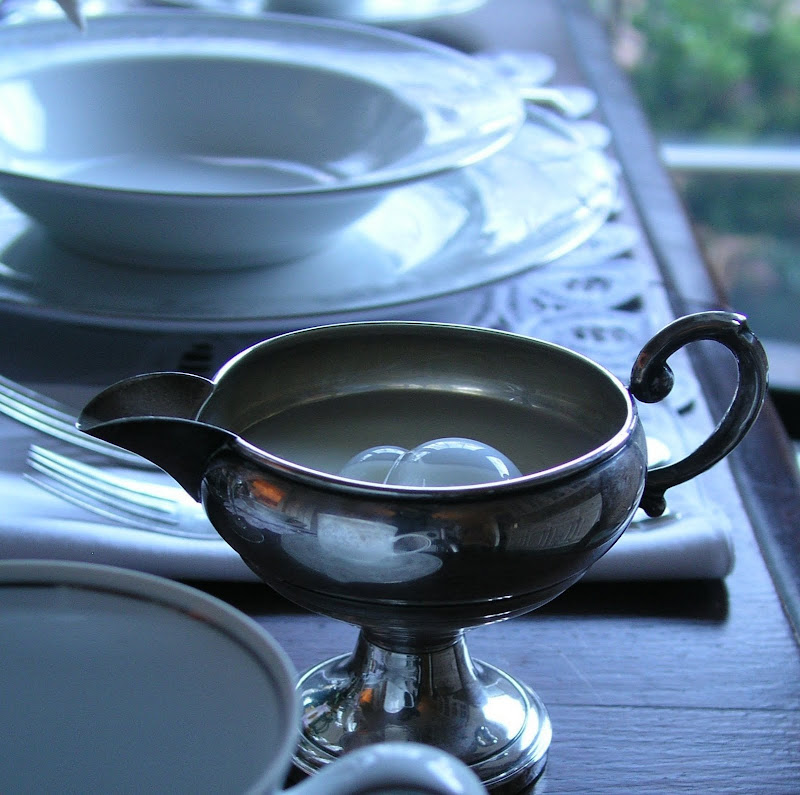 I think there's something very appealing about using old-fashioned sugar cubes. It seems to make sweetening coffee or tea feel more special than when one simply pours in a spoonful or two of the basic granulated kind. Do you agree? 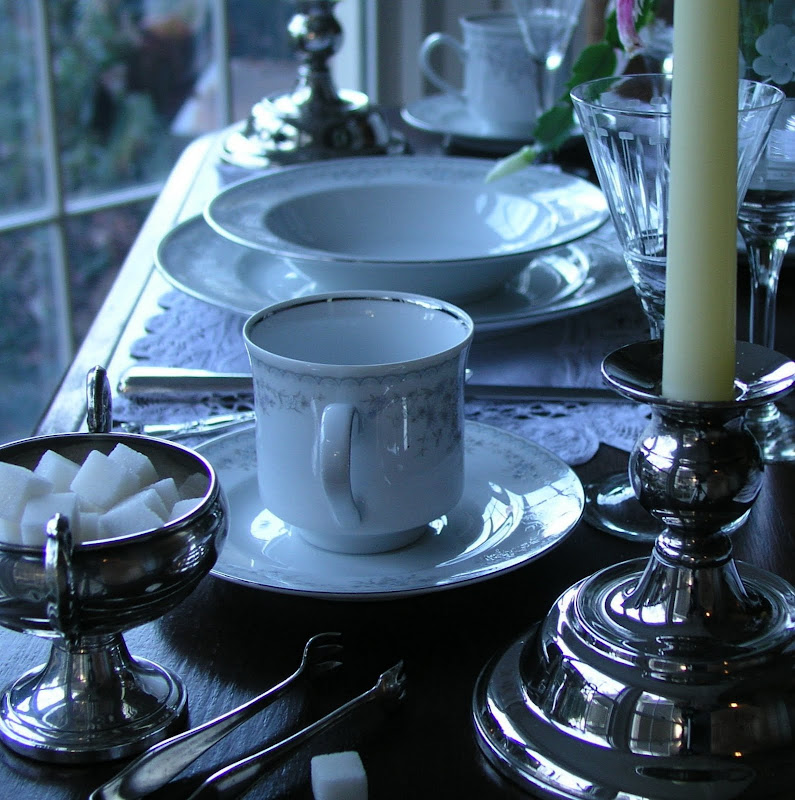 The tall stemmed water glasses are from Goodwill and cost 99 cents each. The etched wine stems are from a local estate sale. It was the second day of the sale, when small items were half price. A set of six totaled $4.00. 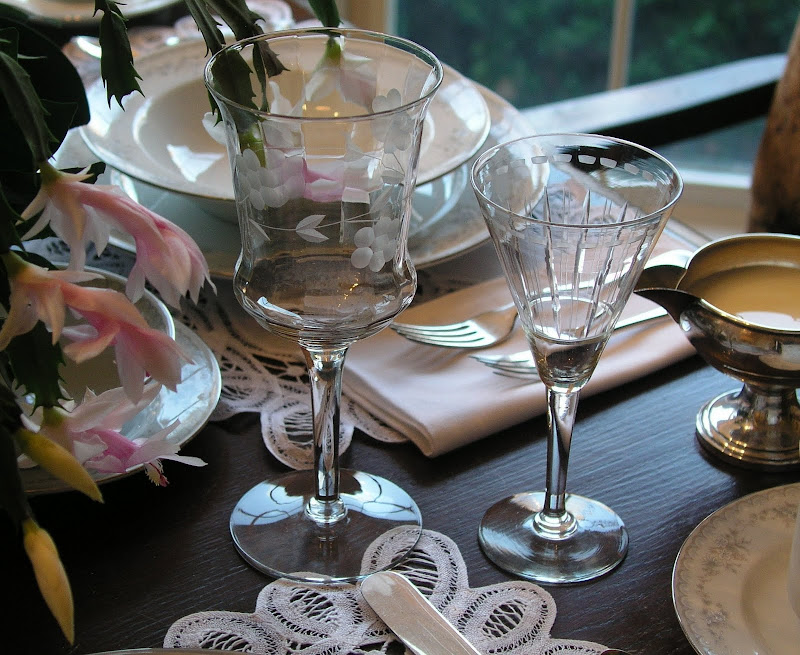 Another view of the glasses. This segment of the holiday cactus resembles (to my eye at least) a holly leaf and serves as a reminder of Christmas and the spirit of giving. 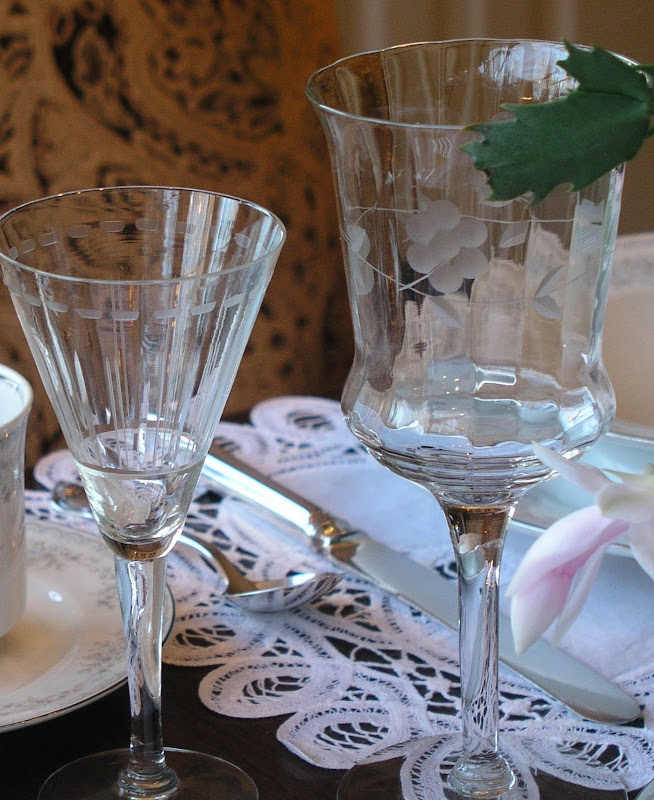 I added mismatched chairs to the usual pair that flank the antique table. 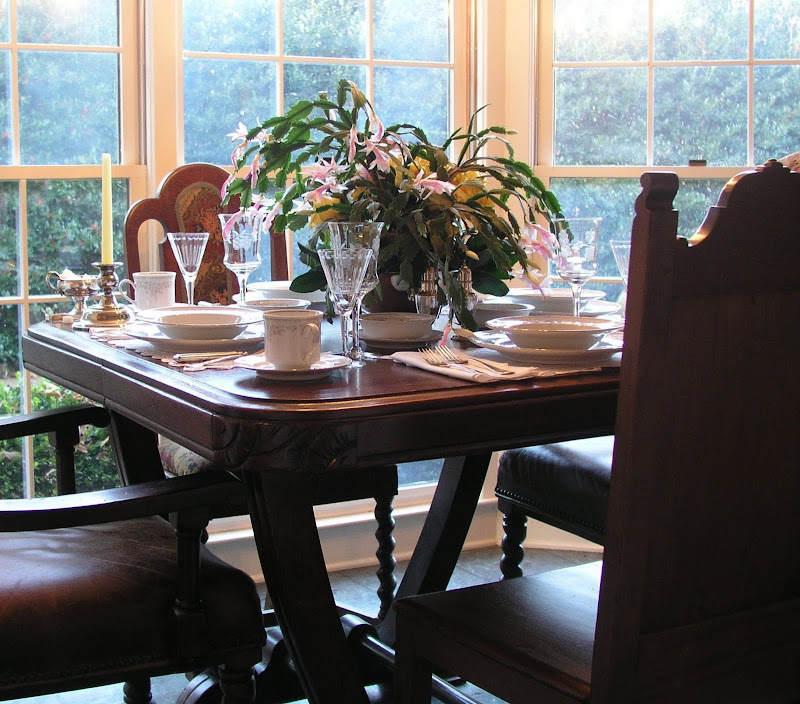 Here's a closer view of the flowers. 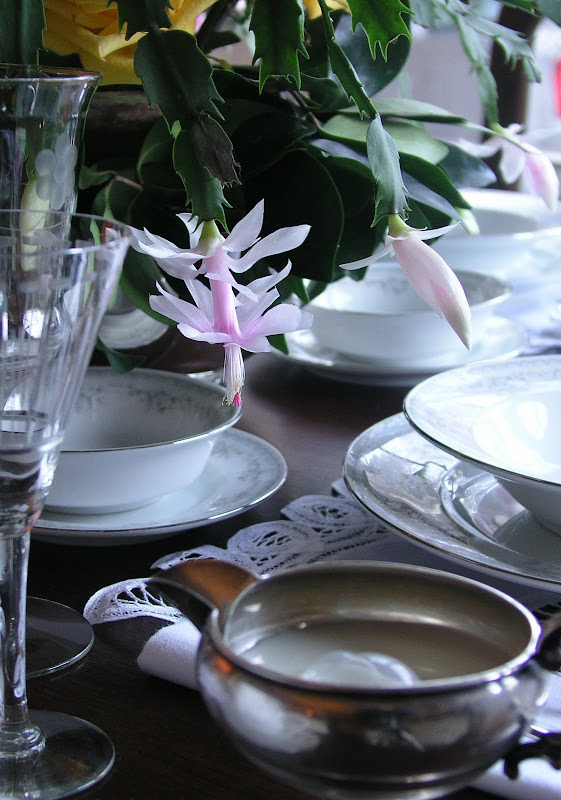 The placemats and napkins are a linen/cotton blend accented with Battenburg lace. I purchased a boxful of them at a garage sale for $1. 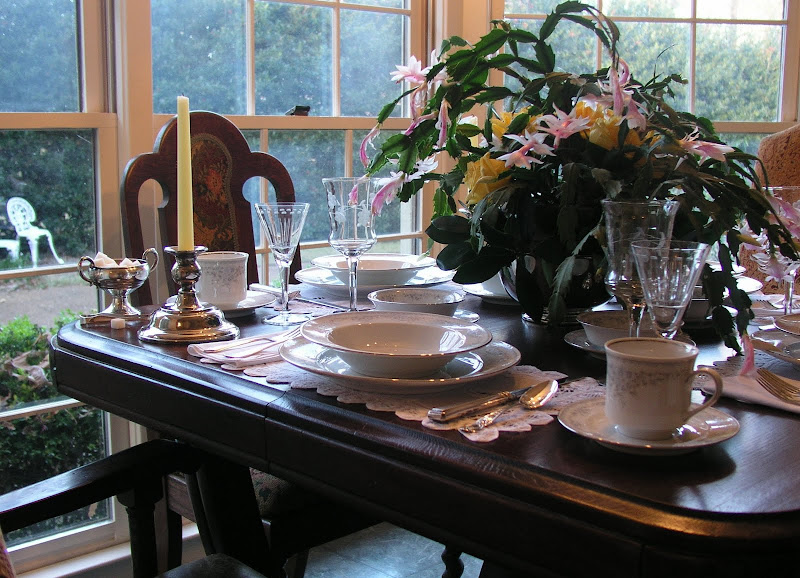 The delicate pink flowers juxtaposed with the stylized etched floral pattern of the vintage stemware ... 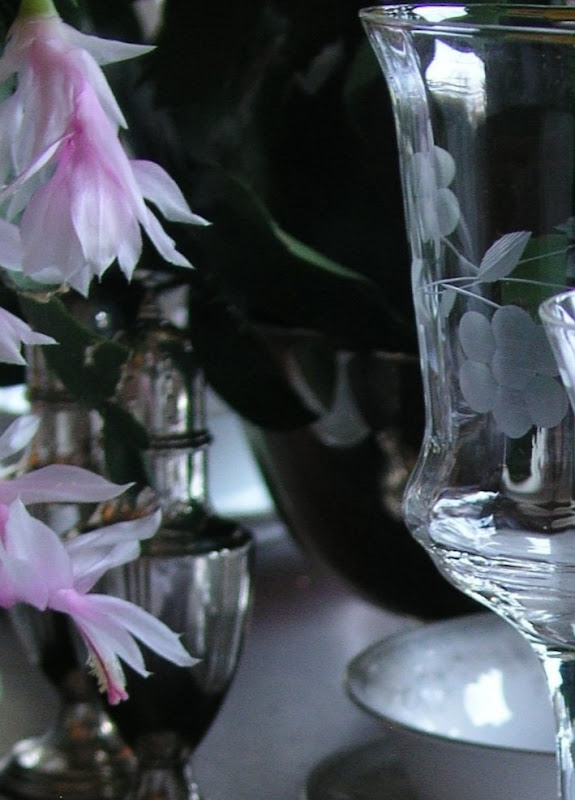 A closer view of the weighted base of the candlestick ... 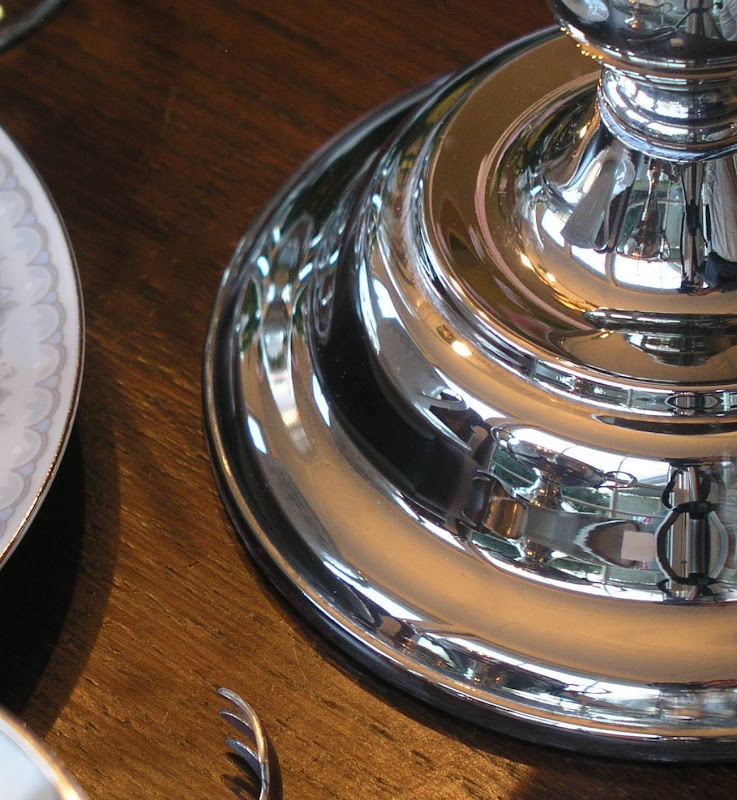 The vintage plated silverware came from a variety of sources, including a bagful of flatware purchased at very little cost from Goodwill. Read about it HERE. I used four different patterns, alternating simple designs with more ornate ones. I always dig through boxes of flatware at antique malls and thrift stores. It's amazing what you can find! 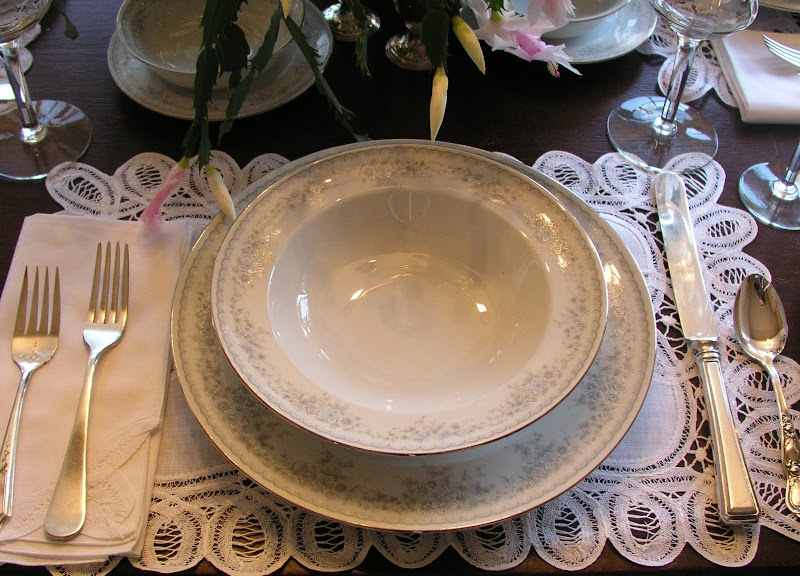 I like the fact that each place setting includes a soup/salad bowl and a berry bowl. Typical place settings of china include a salad plate, and bowls usually sell separately. 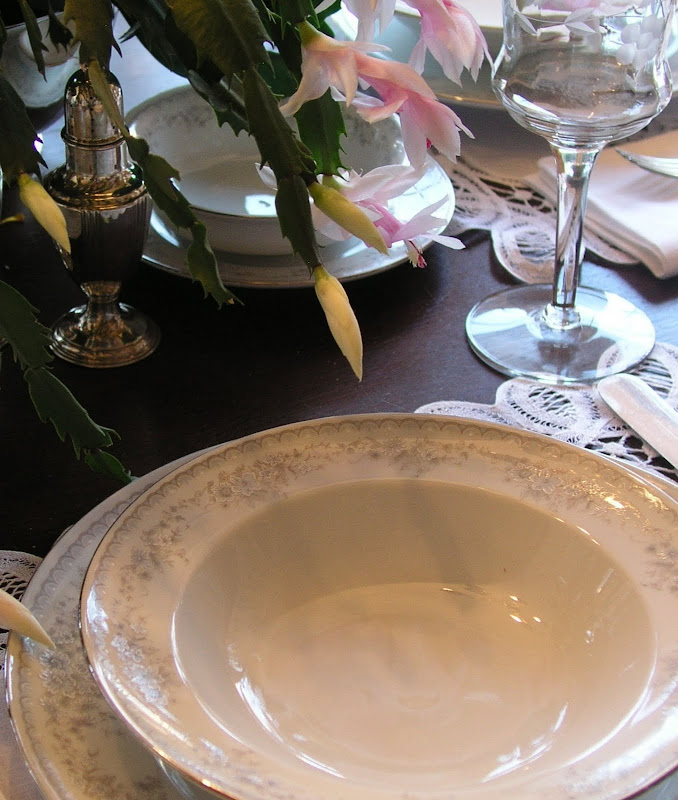 A closer view of the subtle floral pattern. The set is in like-new condition and ... the price is ... FREE to a lucky reader of Affordable Accoutrements. If you leave a comment, your name will be entered into a drawing to be held on December 15, 2009. If you let me know you're a follower, your name will be entered twice. If you mention that you subscribe via e-mail, I'll put your name in a third time. Due to the weight and size of the package, I'll have to ask that only readers who reside in the continental US be considered eligible for this particular giveaway. Other drawings (for lighter weight items!) will follow. 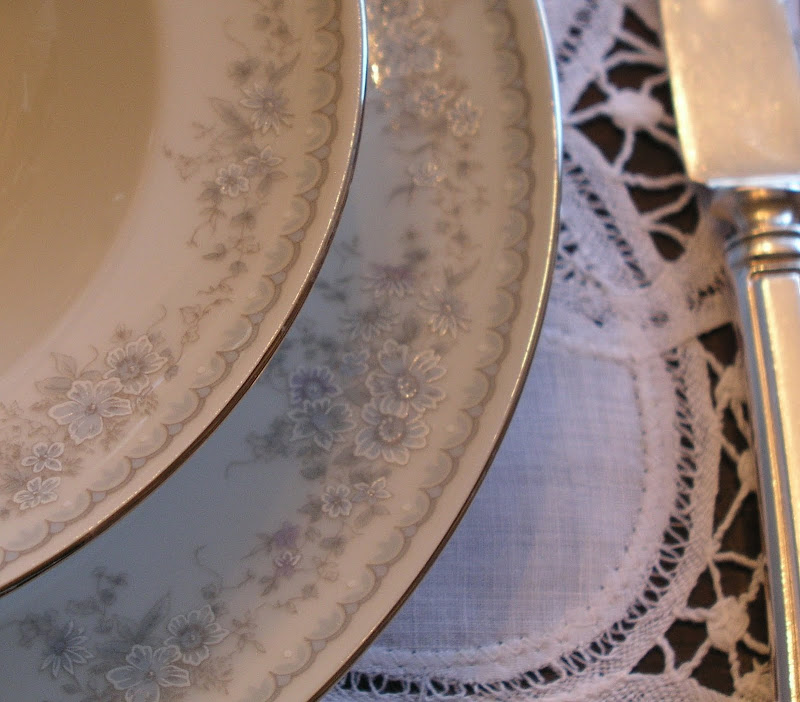 Jean Haviland (later changed to John/Johann) was the grandson of David Haviland of New York, the founder of Haviland & Company, in Limoges, France. Jean started his own company in Germany in 1907. World War I took a toll on the company; it was sold, and later sold again to Rosenthal.
According to the Replacements, LTD website:

"Following the Second World War, Rosenthal began to heavily market Johann Haviland china in the United States. Many of the patterns produced during the second half of the century were sold or given away as premiums with groceries. Many families acquired their Haviland China pattern by acquiring one piece at a time, when the family’s grocery shopping was done. The people of the United States favored Johann Haviland’s designs because they resembled the elegant Limoges designs for which the Haviland name became popular. To meet the demand for these designs, the Haviland Waldershof factory remained open through the late 1980’s. " 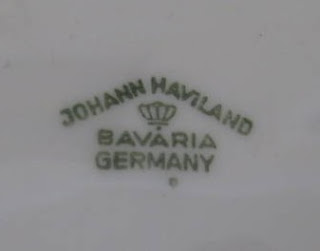 Replacements, LTD offers "Royal Lace" for approximately $65 per place setting. Now you KNOW I didn't pay quite that much! I certainly hope the lucky recipient of the china will find it useful and attractive. 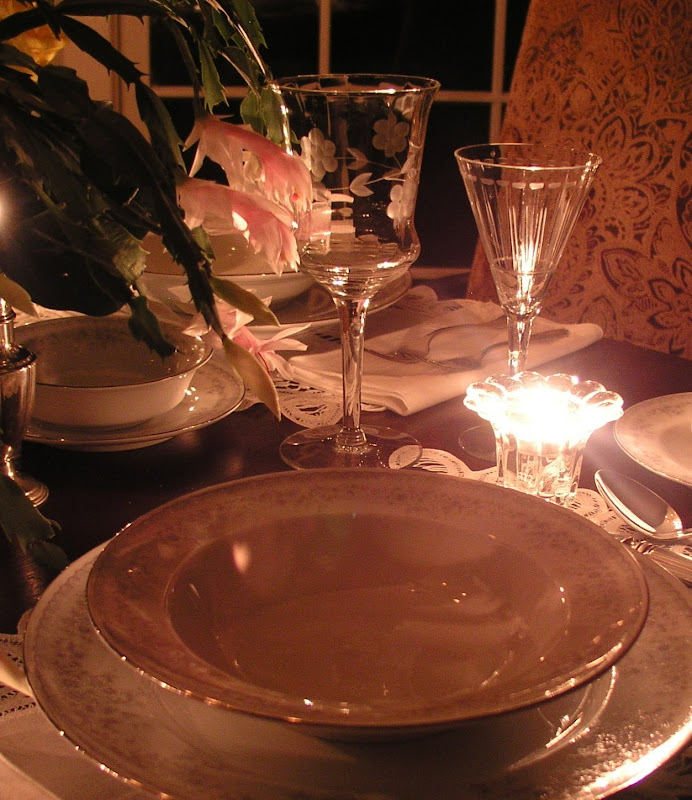 I thought you'd want to see the table, and the china of course, by candlelight. 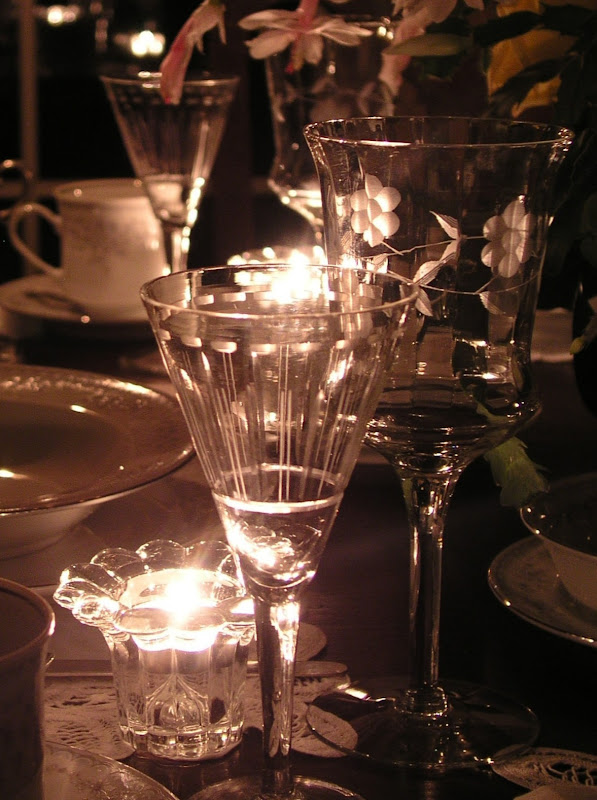 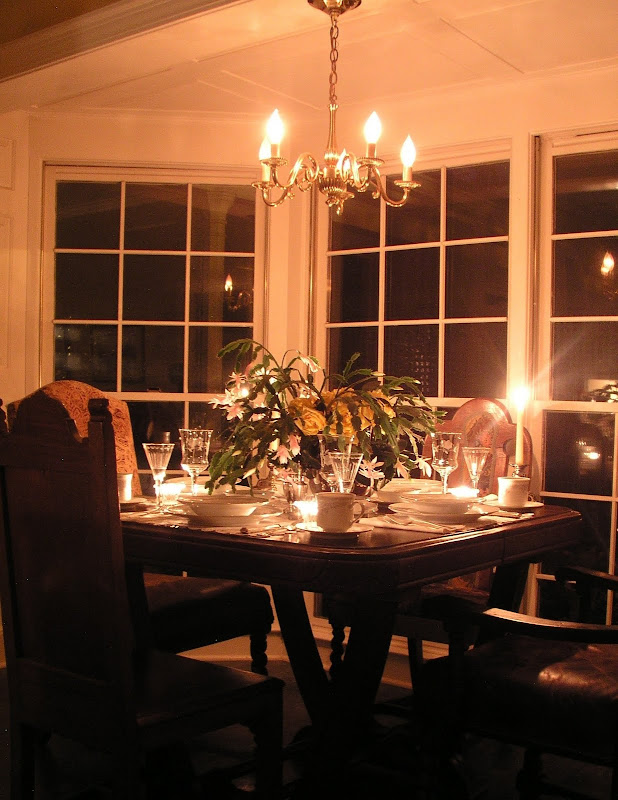 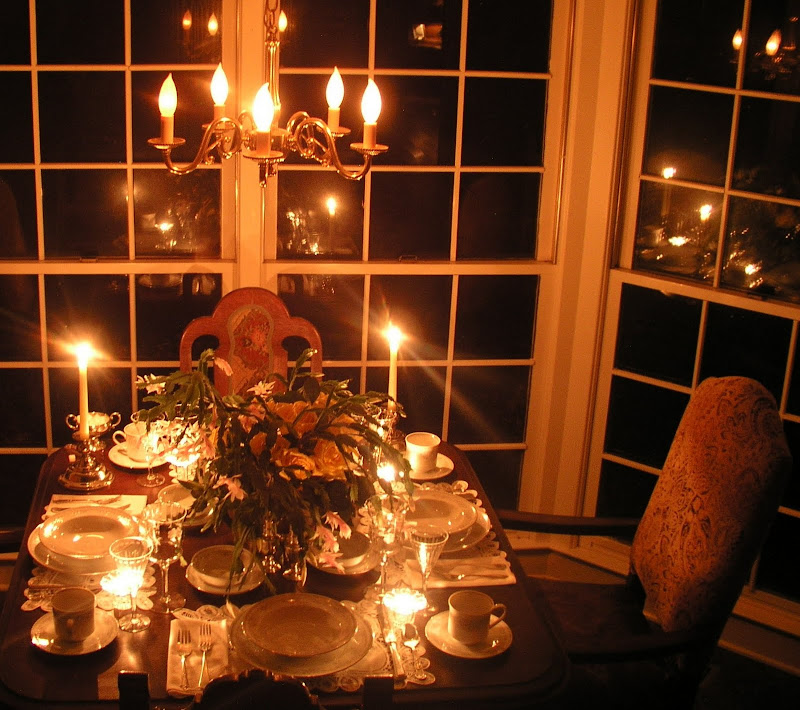 With the tripod (and me!) precariously perched on the kitchen island, I took this "aerial" shot for you ... 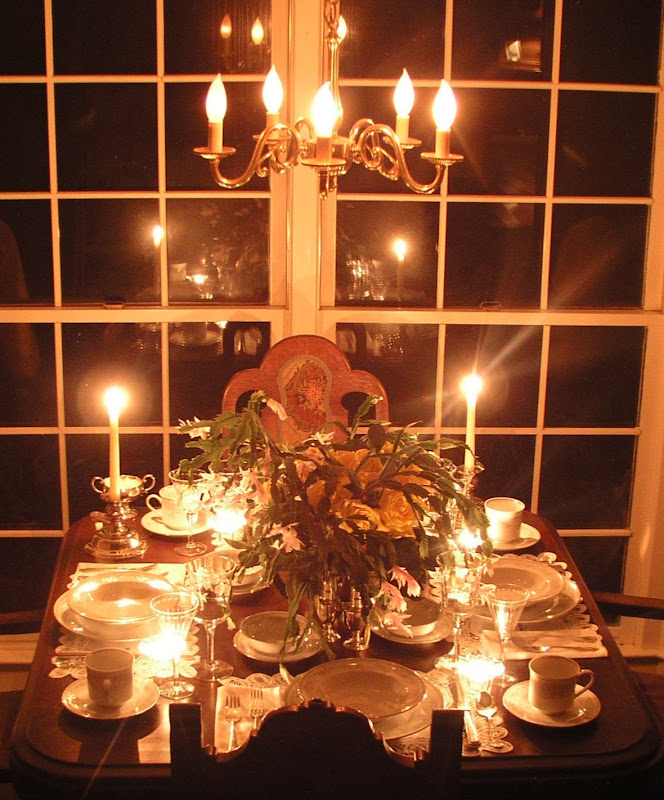 I wonder who will win the giveaway ... I hope it's YOU! Thank you for your visits, your kindness, and your support.


Don't forget to visit Susan of Between Naps on the Porch for Tablescape Thursdays! It's always a fantastic party, with the most gracious hostess imaginable!