It's time for another Tablescape Thursday with our charming hostess, Susan of Between Naps on the Porch. I'm very grateful to Susan for providing this popular creative outlet for those of us who enjoy collecting tabletop items and sharing them through our posts. I'm also extremely appreciative of all the visits and kind comments from so many of you. Visits/comments aren't WHY we blog, but they do provide affirmation (and sometimes offer helpful critique).

I'm pleased that Jackie from Surrey, UK, who participated in Tablescape Thursday a few times, has decided to return to blogging. Stop by and see her at http://jackiespersonalblog.blogspot.com/. If you followed her previous blog, you already know Jackie takes readers to fascinating places, takes great photographs, and shares insight into life in the UK (Anglophiles take heed!).

I'm not sure why, but I'd resisted the urge to set a seasonal table for you ... until today. It must be the glory of the Autumn colors I've been seeing on bright, beautiful days that compelled me to 'think leaves,' both real and in stylized patterns. The Japanese maple out front is so beautiful this year! I snipped leaves (from an inconspicuous spot) and tucked them into each napkin. The napkins are vintage, from an estate sale, and appear never to have been used. They were reduced (second day of the sale) to $2 for six. 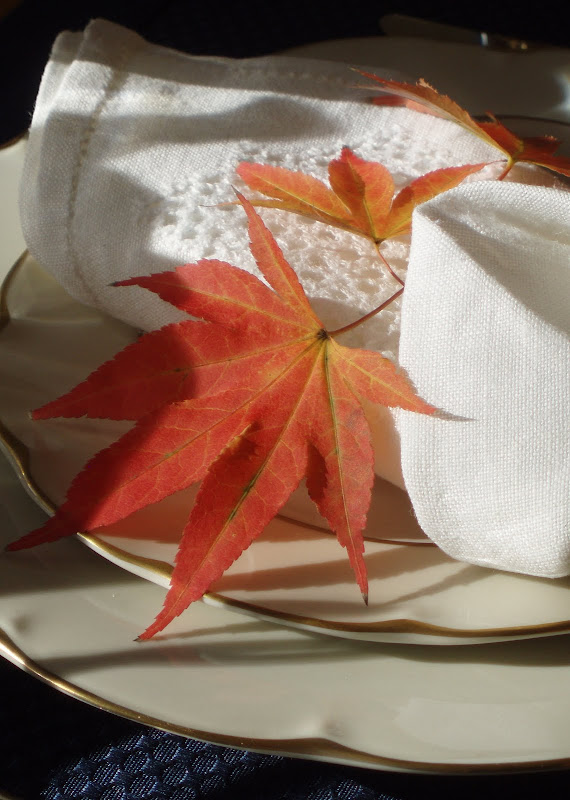 A few weeks ago, I set a 'circa 1961' table for you, inspired by the Mad Men series on AMC. You can see that table HERE. In one episode, I was delighted to see Mad Men's main character, Don Draper, sipping scotch from a vintage Libbey "Golden Foliage" rocks glass. I have my mother's set of Libbey stemmed water goblets. She acquired them with trading stamps when I was a child. They were only used for special meals, and she never put them in the dishwasher. They're as shiny as the day she proudly brought them home. 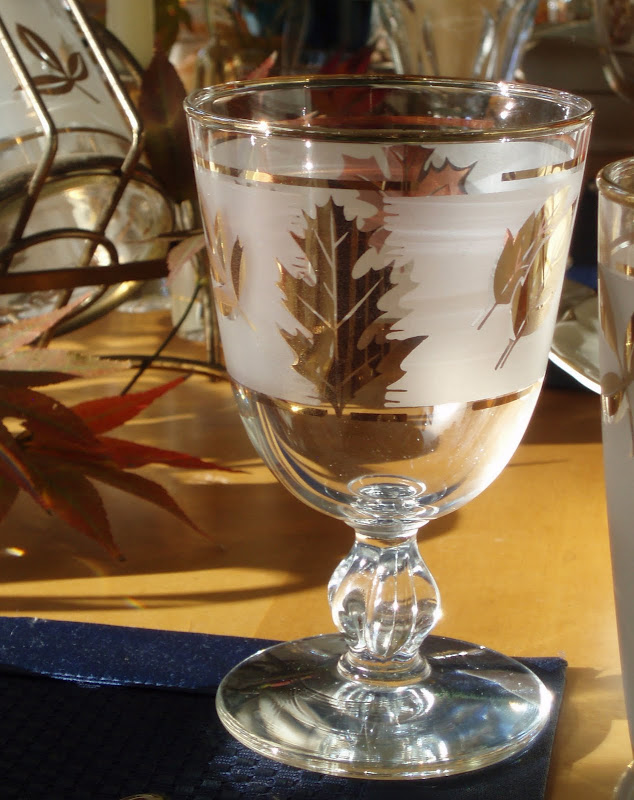 If you've visited Affordable Accoutrements before, you probably won't be TOO surprised to learn that I've expanded her little collection. I purchased this set of beverage glasses (in the original brass caddy) at an antique mall. The flatware is "South Seas" by Oneida, 1955 (just for you, Lori E!). 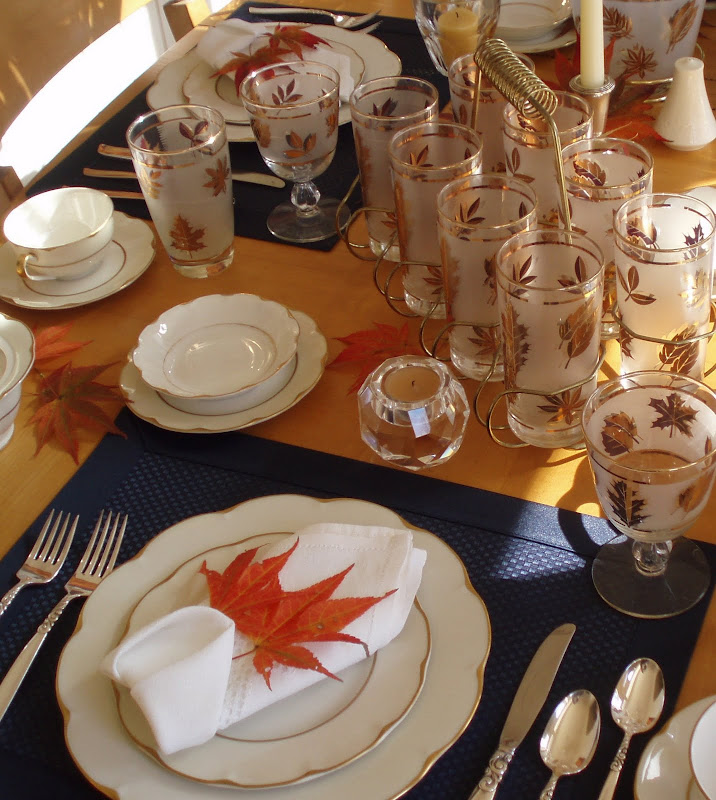 For the centerpiece, I opted to use supermarket flowers (marked down of course ... to just $2.99!). The nice lady I always exchange pleasantries with at the store told me she was just about to reduce some tulips ... if I could use them. She offered me several colors, but I thought the red and yellow seemed the right choice for a Fall table. 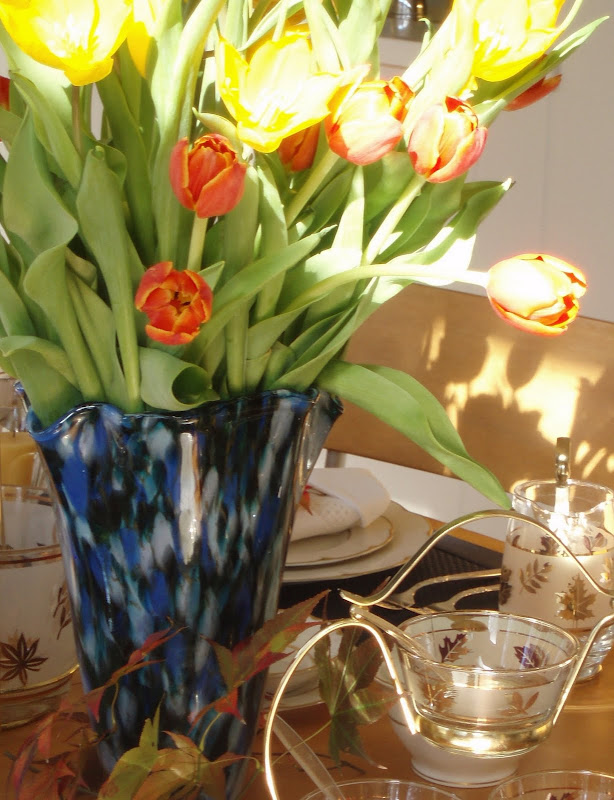 They were still tightly closed when I brought them home but, after I snipped the stems and put them in water, they began to open in the afternoon light. I think the little pitcher, lower left, is rather cunning, don't you? ;) 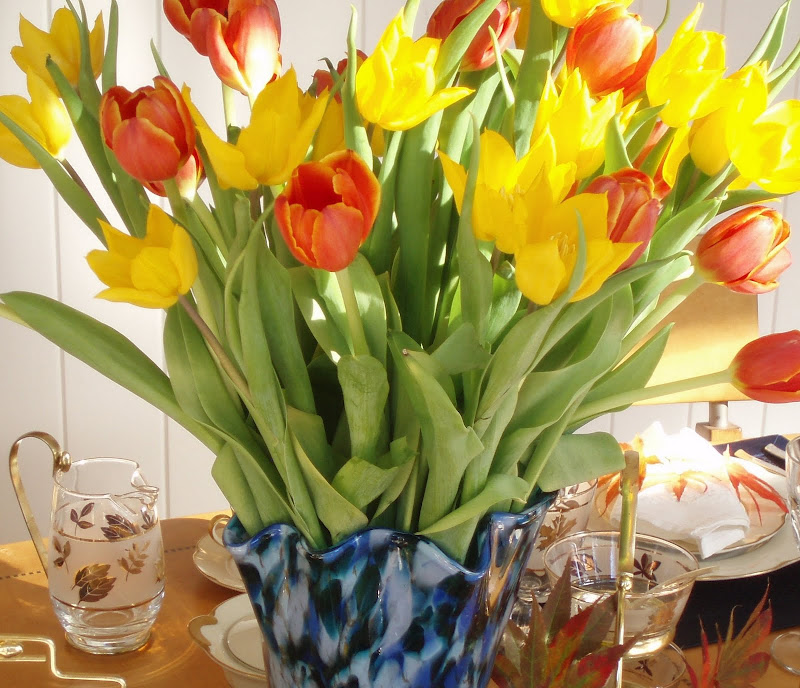 I decided to bring in a painting from another room to further the colorful theme. It's an impasto oil painting (thick paint applied with a palette knife) done a few years ago by my friend, Yvonne. She's won many awards with her dramatic approach to artmaking. 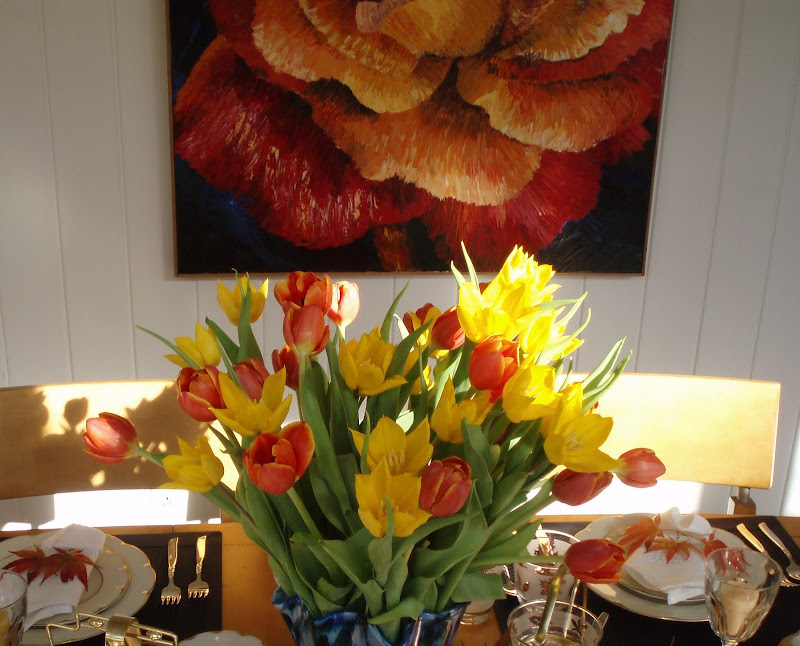 Here's another view of the table. I used dark blue placemats (from Goodwill) and a blue art glass vase I received as a birthday gift last month. 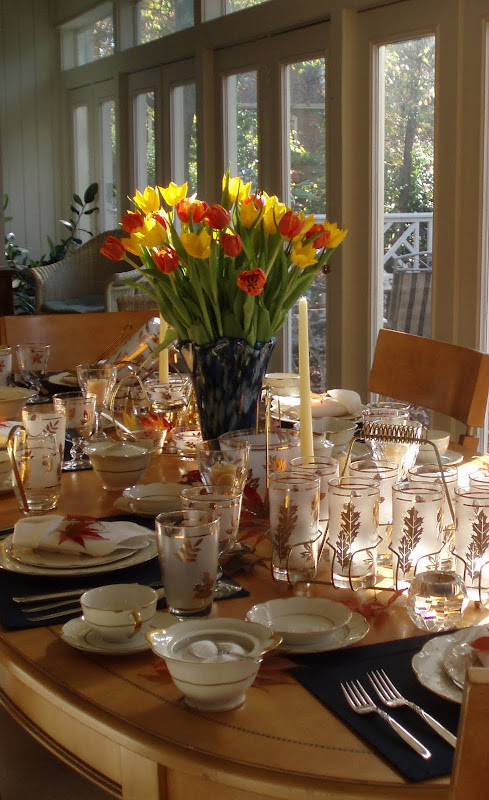 With such boldly patterned glassware, I decided the china should be simple. It's called "Concorde," by Theodore Haviland. It was introduced in 1950 (although it resembles a different, much older, Haviland pattern). I know this was made prior to 1957, because it's marked New York, and Theodore Haviland's operations were moved to France that year. I have quite a few pieces, purchased at two different estate sales.

This china could have been on a table set by Don Draper's wife, Betty. She might have selected the pattern as a bride in the late 1950s. Their home is a mixture of traditional furnishings and mid-century modern. 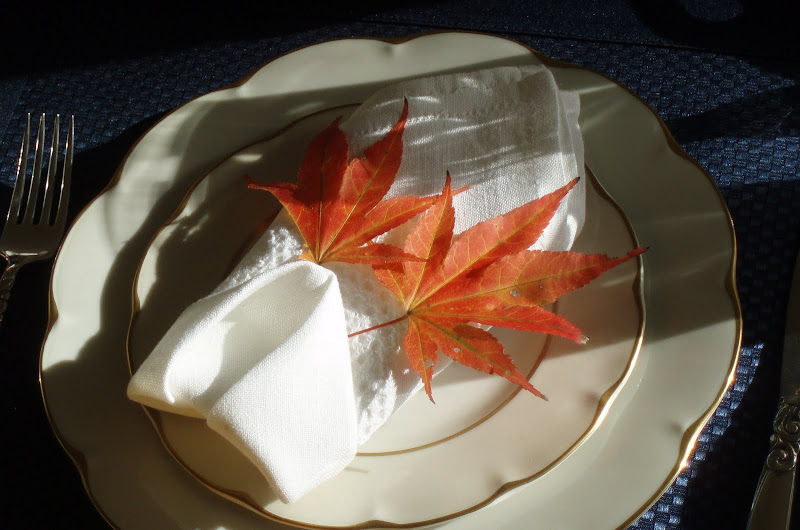 The coffee pot is probably my favorite of the serving pieces. You can purchase one from Replacements, LTD for only $239.95. Fortunately, all the pieces I've collected total less than that amount! 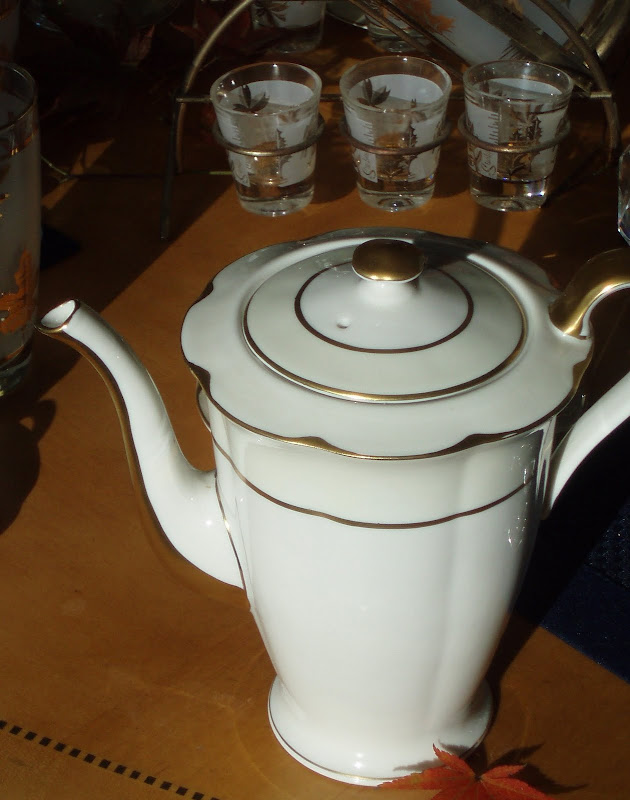 The "tipsy" decanter is a piece I'll probably never actually use, but isn't it fun? 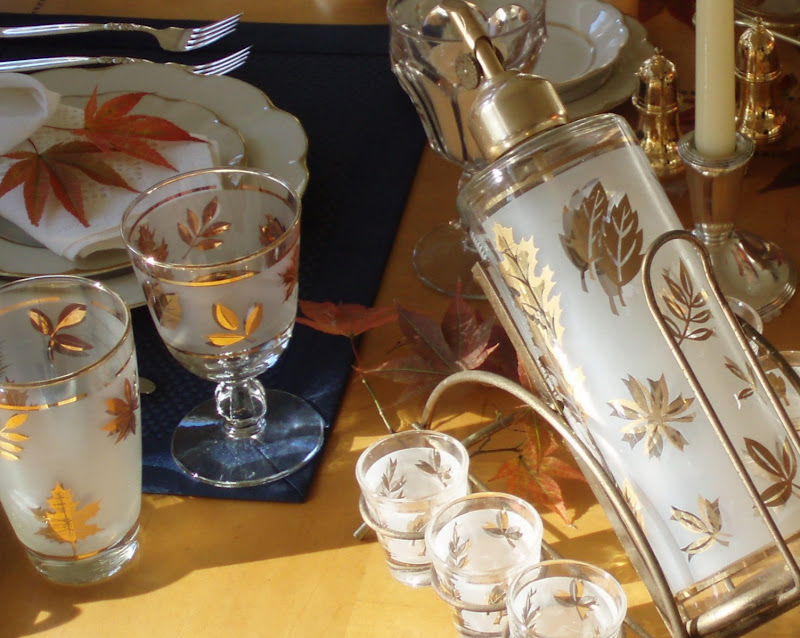 I enjoyed seeing the flowers backlit in mid-afternoon. 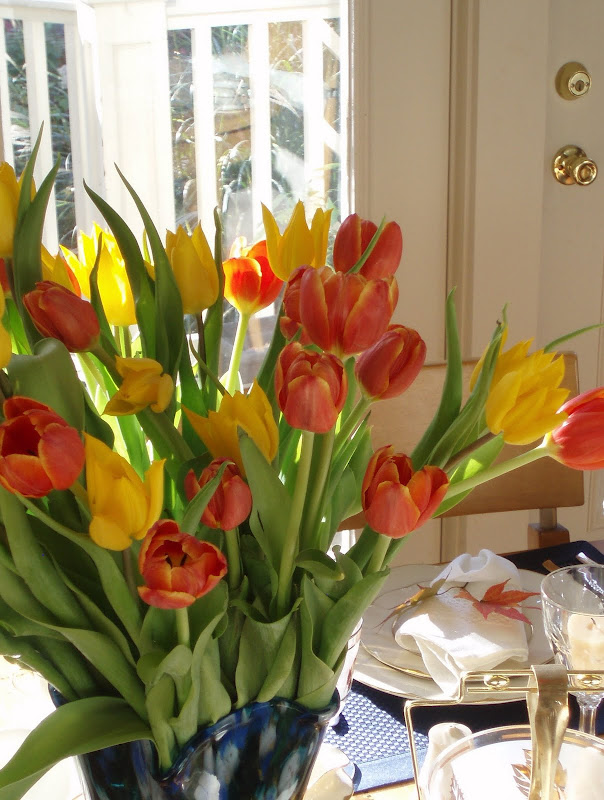 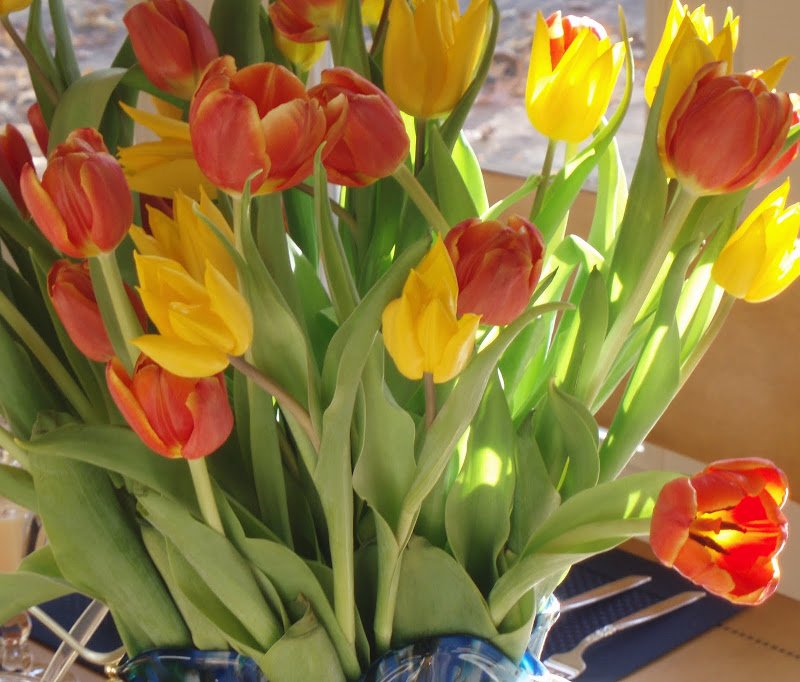 I decided to hang the painting lower than I normally would, since it would be viewed by guests seated at the table. Eye level is a relative concept at best. Often, I think people tend to hang art a bit too high. 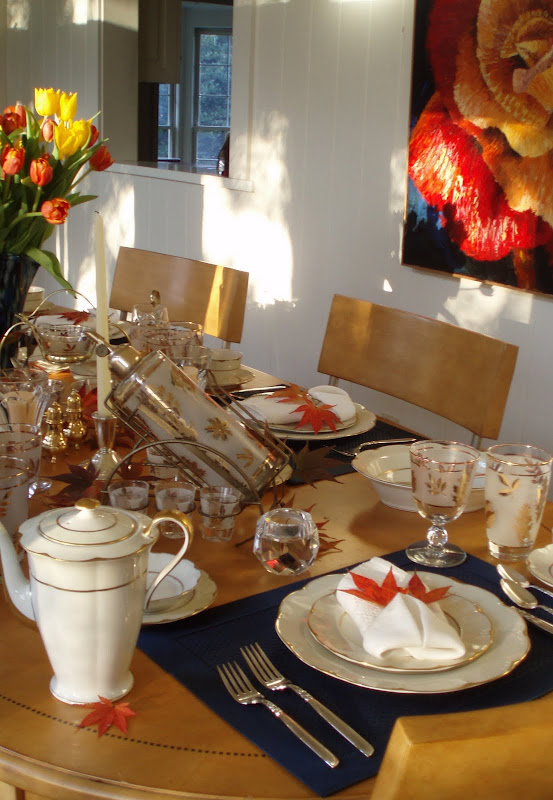 Yvonne's painting has shades of blue in the background that echo the colors of the placemats and the vase. As dinnertime approached, I removed the beverage glasses/caddy and the decanter set from the table. And lit the candles ... 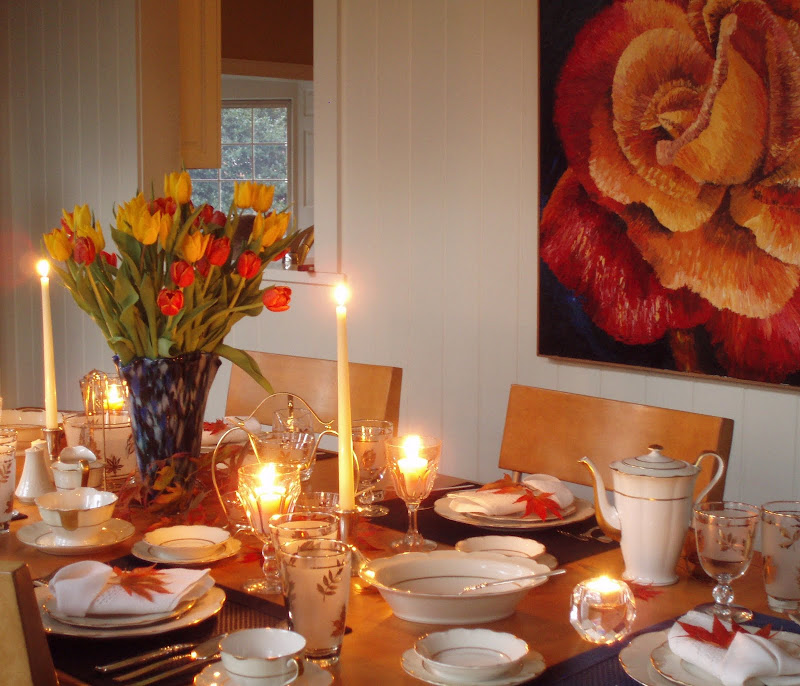 I added leaves here and there to provide additional color and texture. 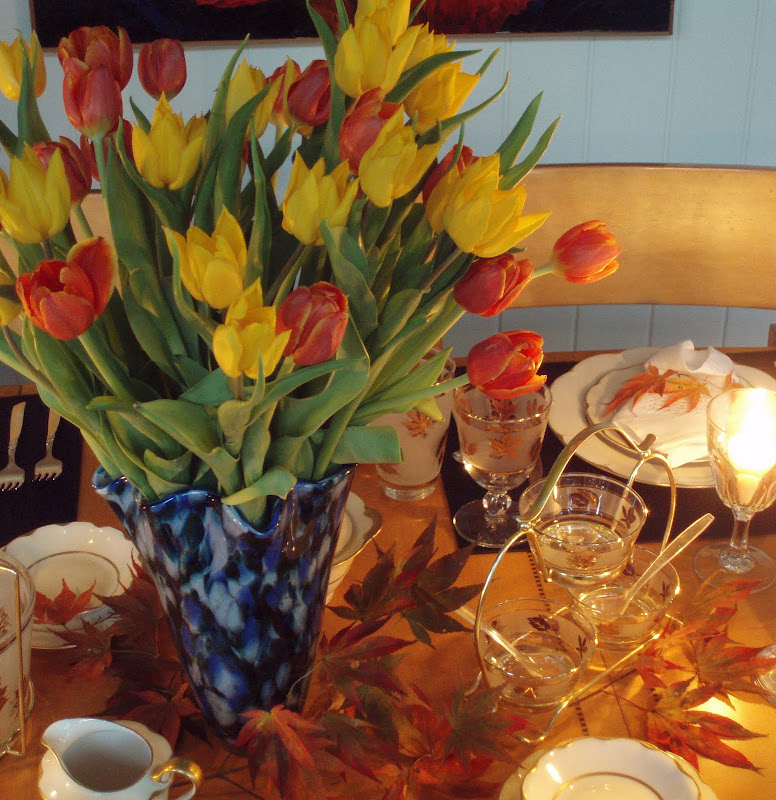 This view from above includes the ice bucket and the condiments set (both in brass caddies). 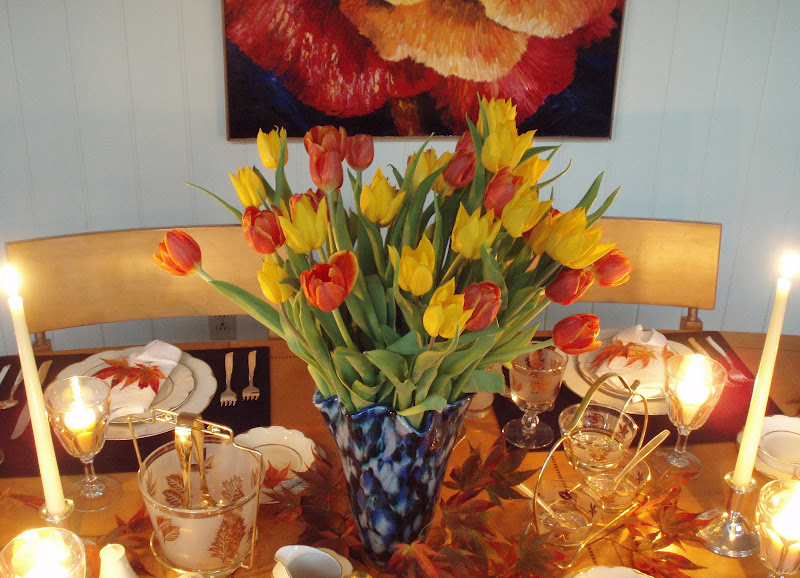 I used sturdy, but sparkling clear, stemmed glasses (49 cents each at Goodwill) as votive holders. 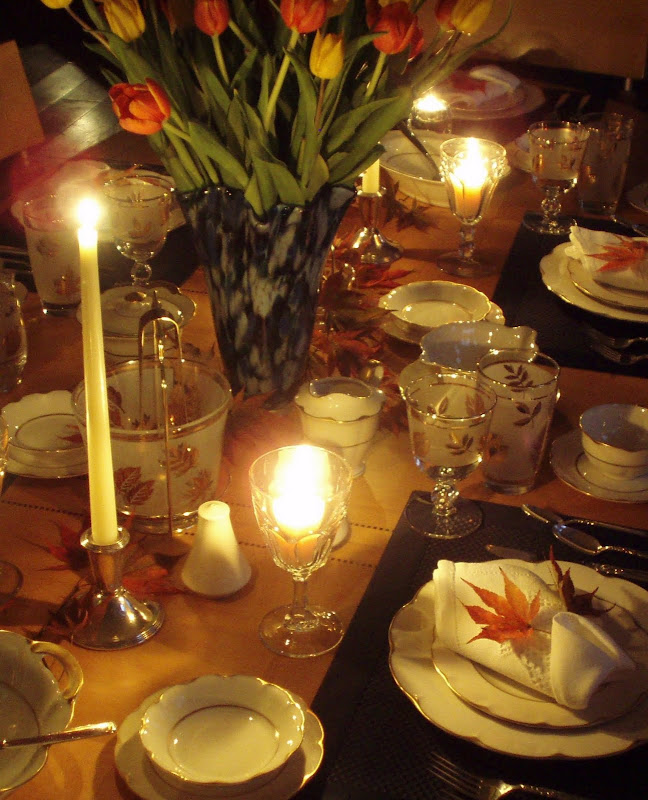 I always enjoy the way candles uplight a bouquet of flowers. 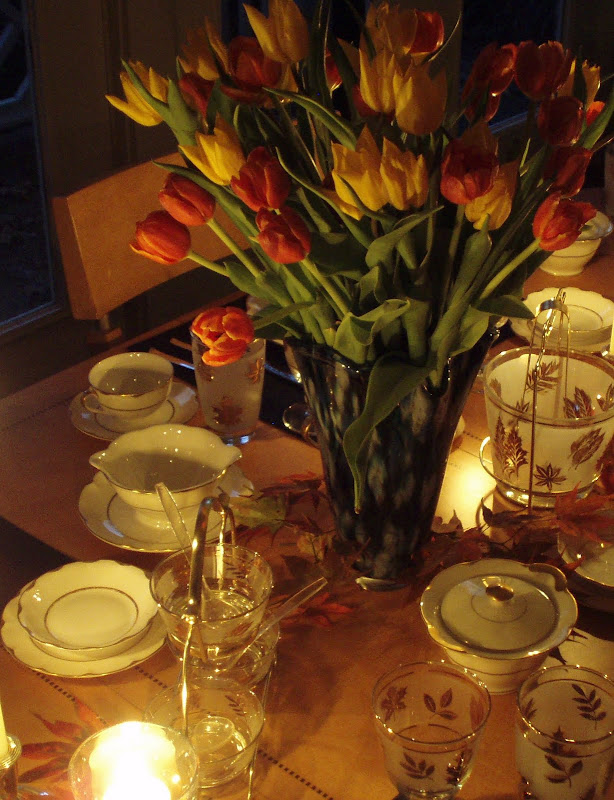 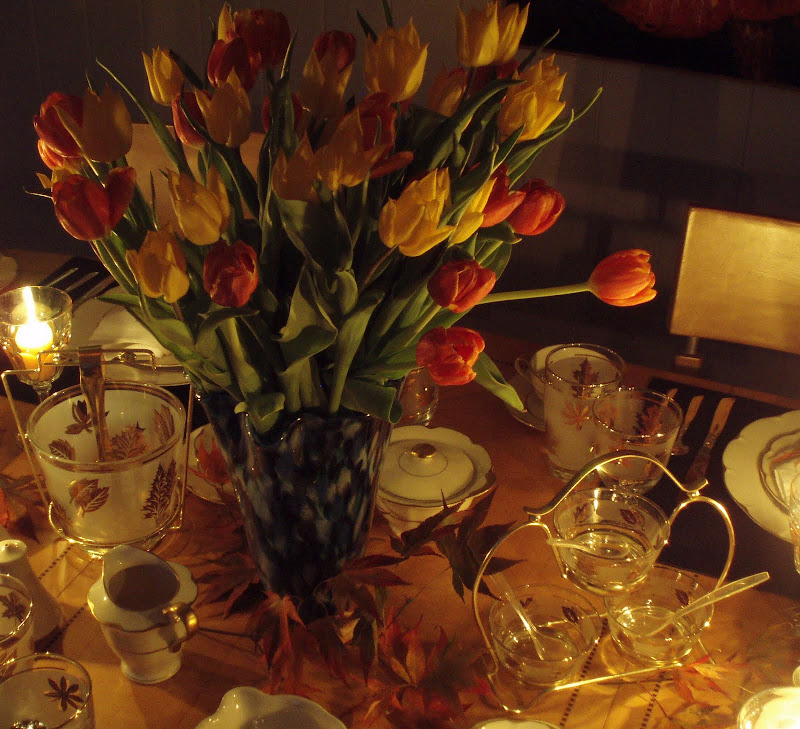 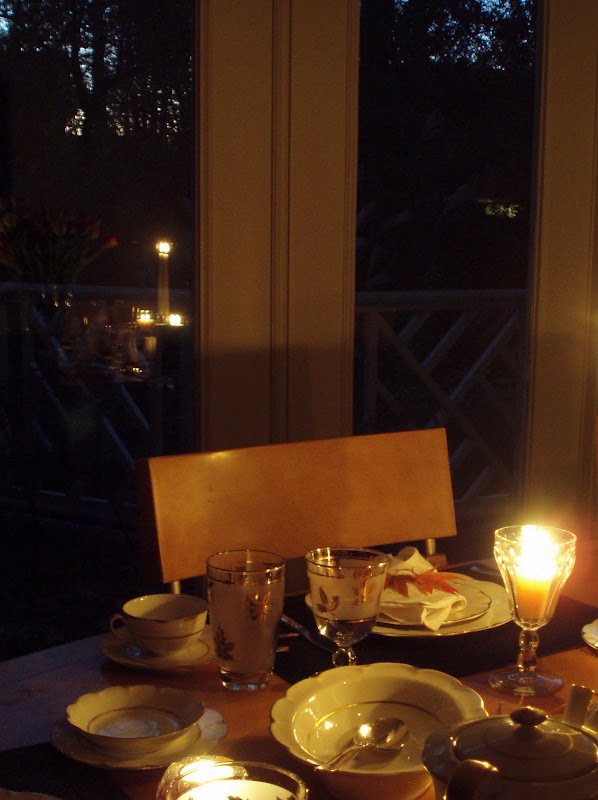 Time for the guests to arrive .... 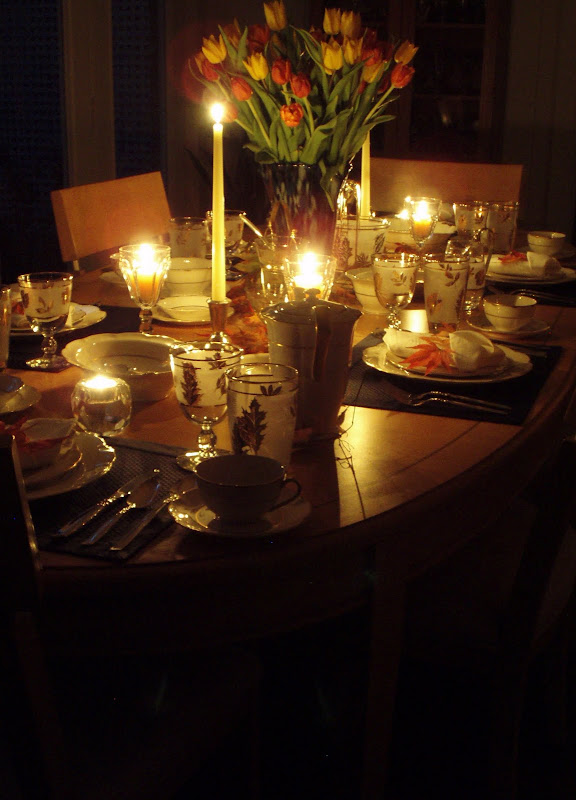 It could almost be the 1960's, couldn't it? Will the ladies wear pale pink lipstick, two sets of false eyelashes? Will they have bouffant hair styles, teased and sprayed ... or will it be long, straight, and ironed into submission? Will the men have Beatles haircuts? Wear Nehru jackets?

I think I'll put a nice Herb Alpert & the Tijuana Brass album on the turntable. Or maybe a Nancy Wilson record ... or Dionne Warwick. What do you think? Oh ... that was a question for Baby Boomers ... Gen Xers need not respond! 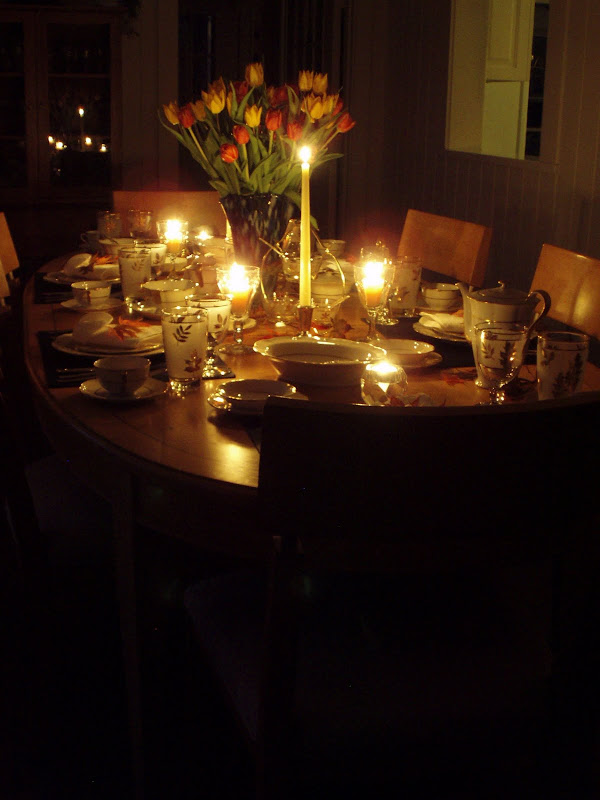 I hope you enjoyed my leafy table. Next week, a look back at the tables I've set for you during the past four months.

Just in case you thought we were finished talking about Libbey leaf glasses ... I might as well go ahead and tell you ... I collect the silver version as well! My mother got those in boxes of Silver Dust Laundry Detergent ... and Golden Wheat dishes in boxes of Duz. Do any of you remember those products? So long ago ... or was it only yesterday?