It's time for another Tablescape Thursday with our charming hostess, Susan of Between Naps on the Porch! I'm also participating in Mosaic Monday for the first time. Stop by Mary’s dear little red house to see other mosaics.

I've set a table for you on this chilly afternoon. I hope you don't mind that we're not in the dining room. It just seemed more cosy and casual to use the den (yes, the den ... I can't get used to saying "keeping room," although I know that sounds FAR more fashionable). I moved out a few chairs and occasional tables, pushed the sofa against the wall, set up a sturdy folding table, and brought in mismatched chairs from adjoining rooms.

If you've visited before, you know I enjoy setting tables with dishes from companies like Haviland, Lenox, Royal Doulton ... and so on, but not today. No damask linens either ... I just tossed an old-fashioned cotton bedspread (the kind our mothers and grandmothers used to have) on the folding table. The dishes are from Goodwill, and the roses are the "Charlie Brown Christmas trees" of the floral world.

On the plus side (I hope), I finally attempted a photo collage. Based on advice from Susan of BNOTP, I downloaded Picasa 3 and gave it a go. It seems that "everybody's doing it" in Blogland ... making mosaics, that is. Here's an overview of today's table: 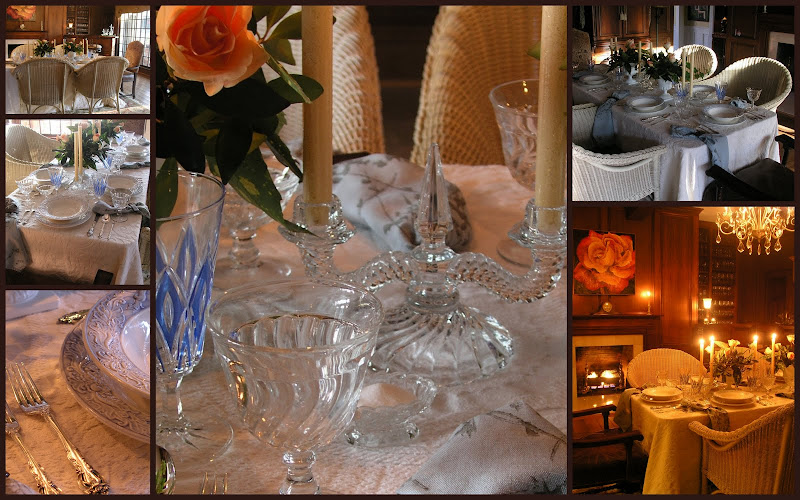 I deliberately incorporated shades of blue that I normally don't find harmonious. I was thinking of this advice from Jason Murakawa, owner of Small Masterpiece, a company in California that rents Limoges china, Early American Pressed glass, and vintage monogrammed linens:

"If the tabletop reflects confidence and deliberate style, no one will question the table."

By the way, if you haven't visited Jason's beautiful website, check it out HERE. Be sure to read about the collections and view his portfolio (click on the main photograph, and it opens a .pdf). The photography is amazing! He's as nice as he is talented, too. Thank you to Valorie, the Visual Vamp for bringing him to our attention HERE. 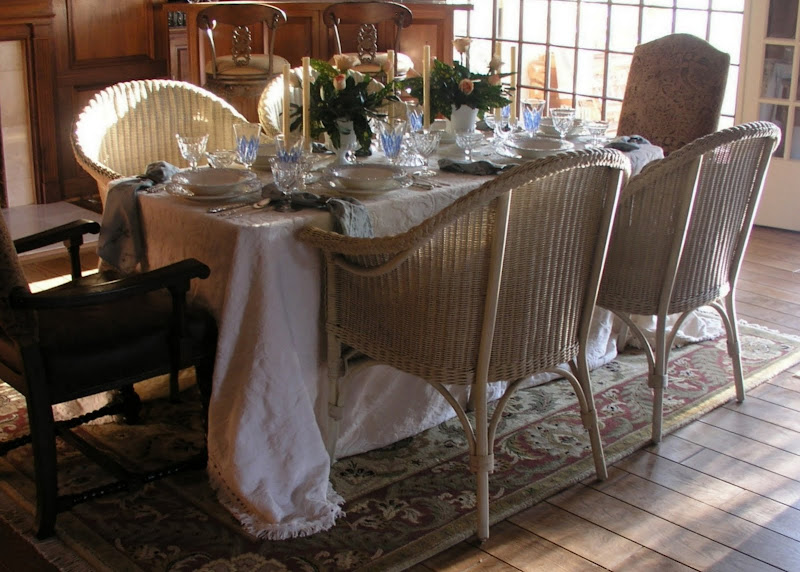 The afternoon sun's coming in. 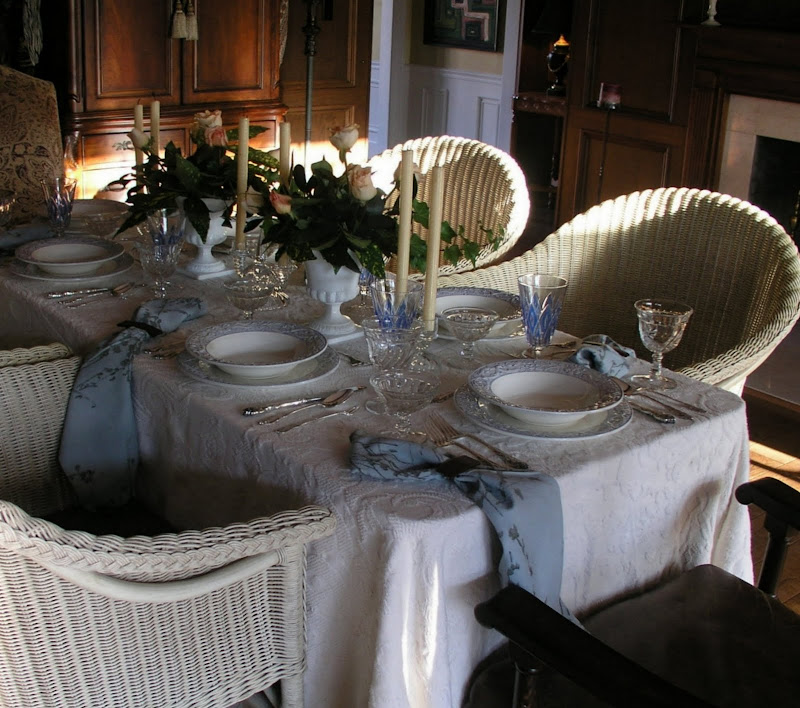 I thought peachy orange roses would compliment the blues of the plates, glasses, and napkins. 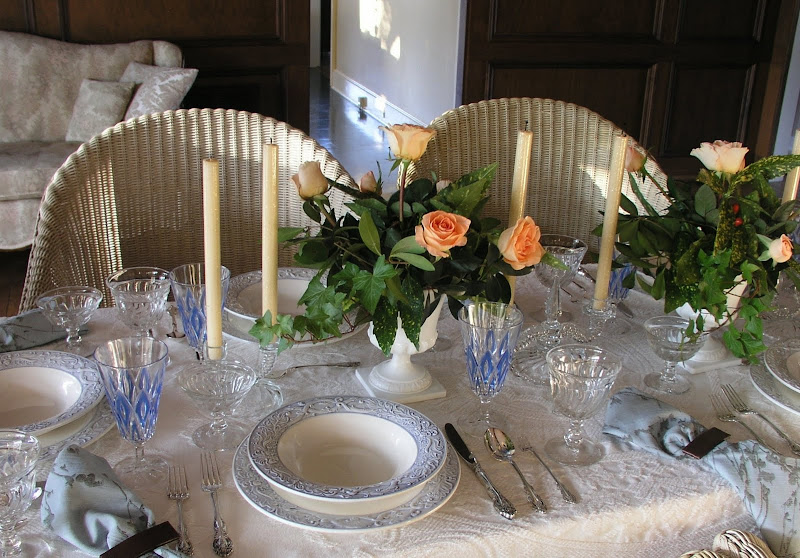 The candles are recycled from last week's table. These T. J. Maxx clearance tapers have tiny gold flecks on them. 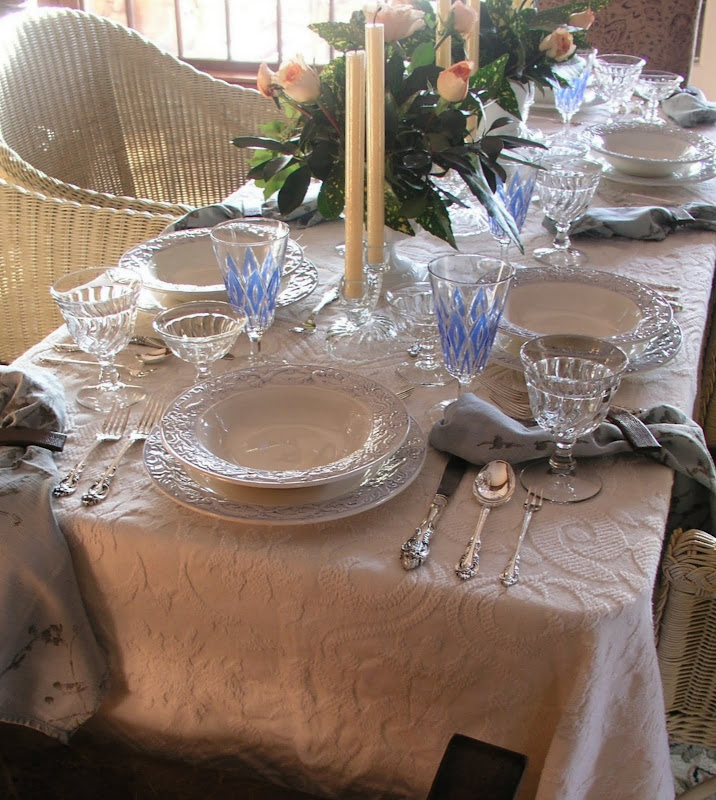 I mentioned that the plates are from Goodwill. They were 50% off the already low price. 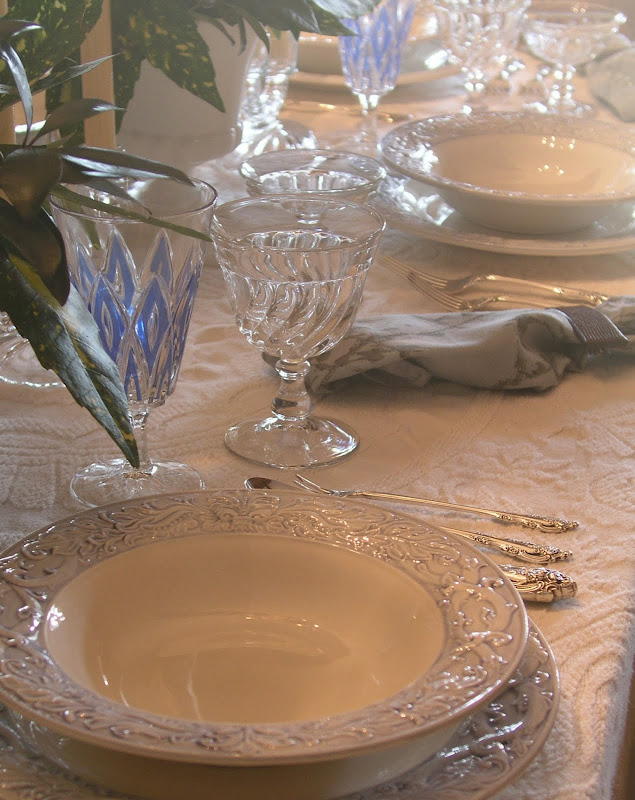 The blue diamond-patterned glassware is an estate sale bargain (8 for $6 on day 2 of the sale). I don't know the maker or the pattern, but I think they look festive. The low water glasses, sherbet dishes, and the candleholders are Colony by Fostoria. The pattern was produced from 1940-1973. It's a heavy, sturdy design that fares well in the dishwasher. 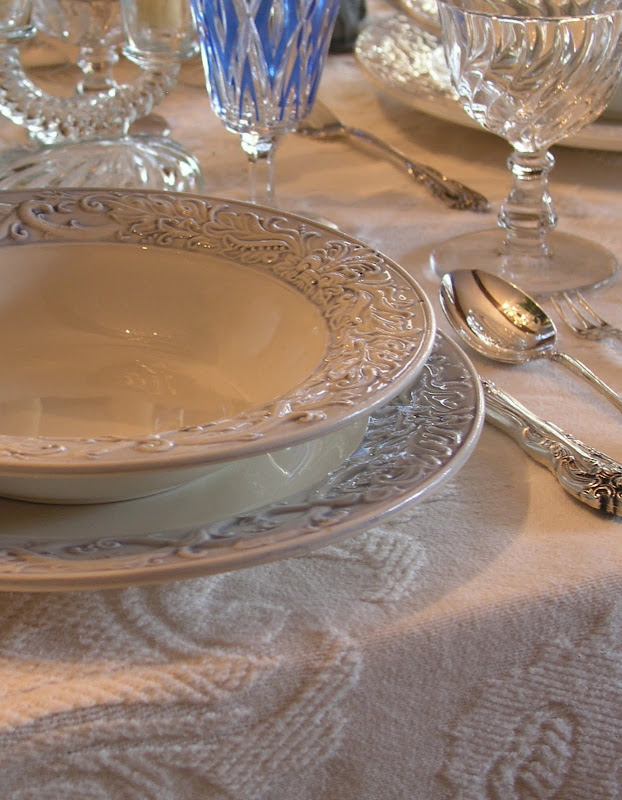 I decided to skip my usual silver candleholders and use glass ones today. Note the Colony salt cellar below. It was a bargain at a local antique mall (the dealer obviously didn't know the pattern). The sherbet dishes came from the same mall. The pattern wasn't listed on the label, and they were priced at only $2.50 each (less then some Wexford pieces in the same booth ... NOT that there's anything wrong with Wexford , but Fostoria's usually priced higher). It really pays to keep your favorite patterns in mind when you're browsing in antique shops and malls (and in thrift stores and estate sales). You never know when you'll find a bargain! 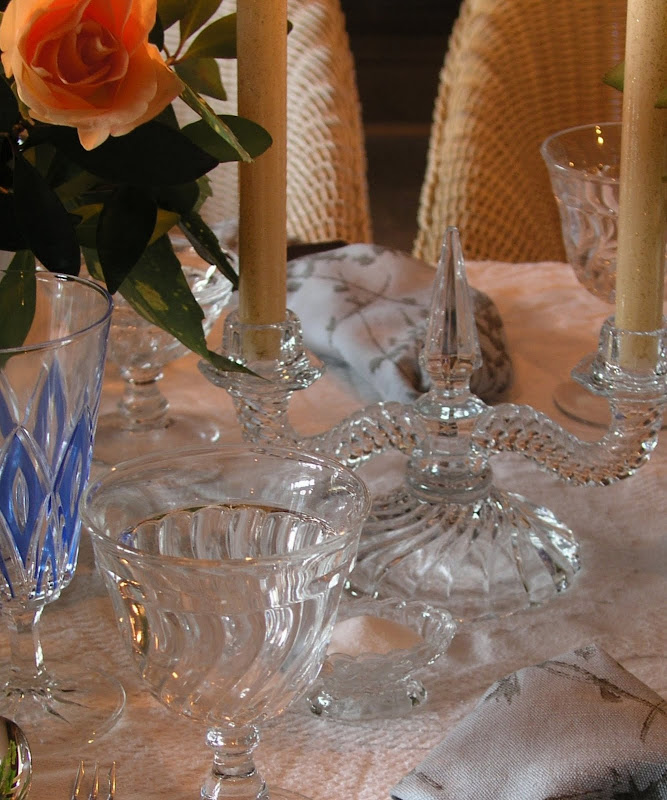 Normally, a glass-topped coffee table sits underneath the light fixture (the table serves double duty, helping to prevent tall folks from walking into it!). It's suspended from a beam that runs the length of the room. 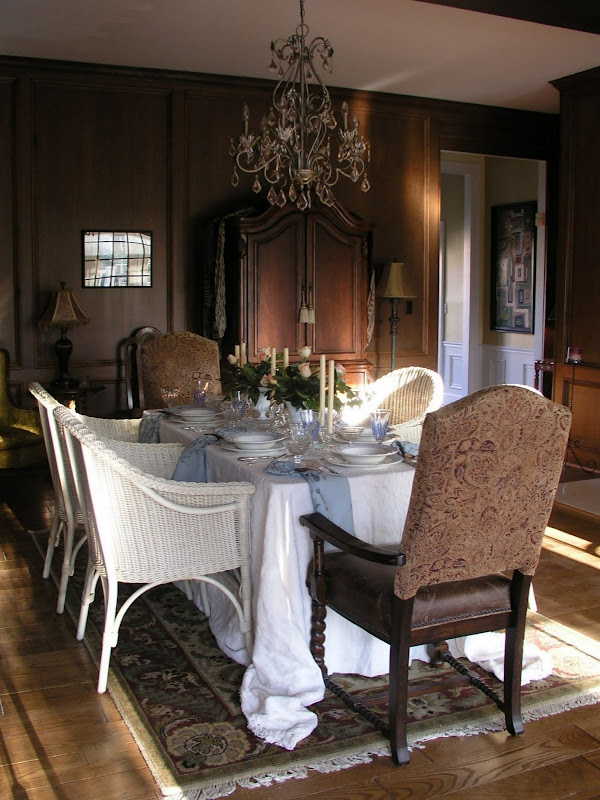 I wound the clock and set it just before I started taking pictures ... but failed to start it properly. So ... you might notice that (it appears) I took many of the photographs at the exact same moment. 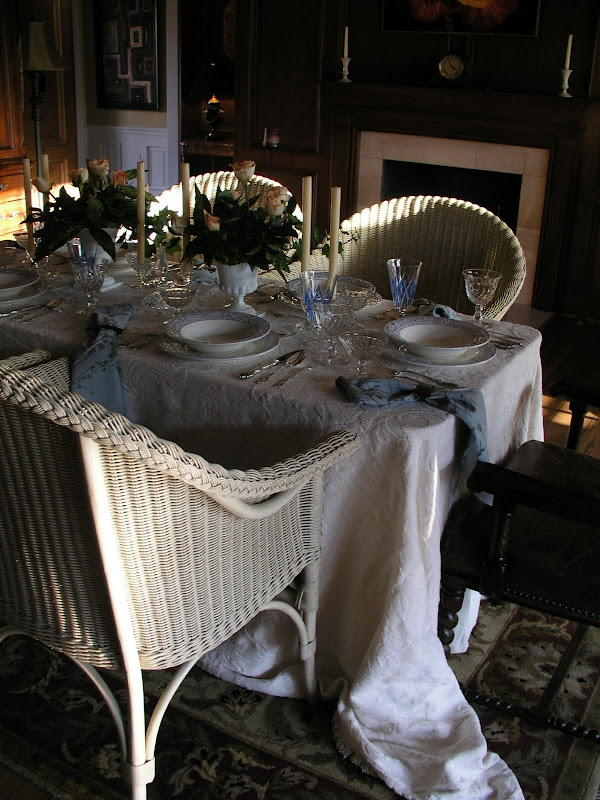 I'll admit that I'm not normally a fan of milk glass, but I think these 99 cent thrift store purchases work well as flower containers on today's table. 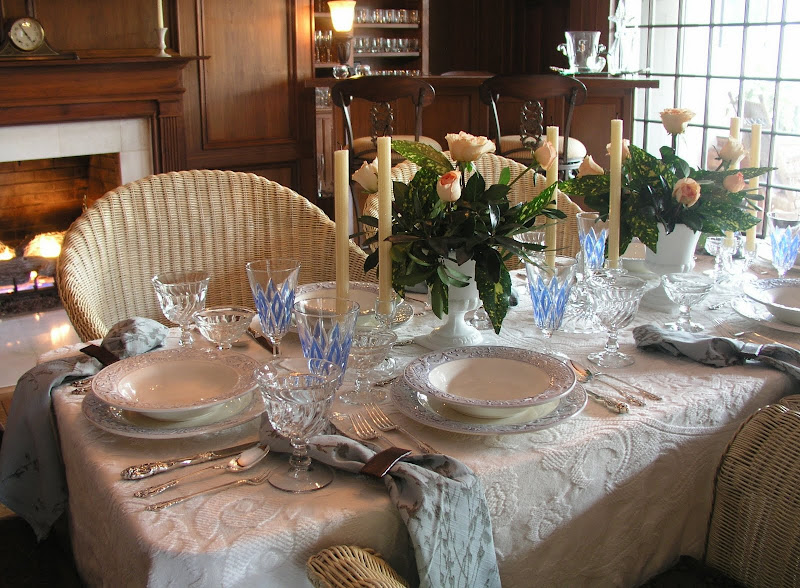 The barware in the corner came mostly from estate sales and thrift stores. And yes, much of it needs washing ... particularly after recent drywall repairs to the ceiling following an unfortunate leak. But that's a long, sad, expensive story ... 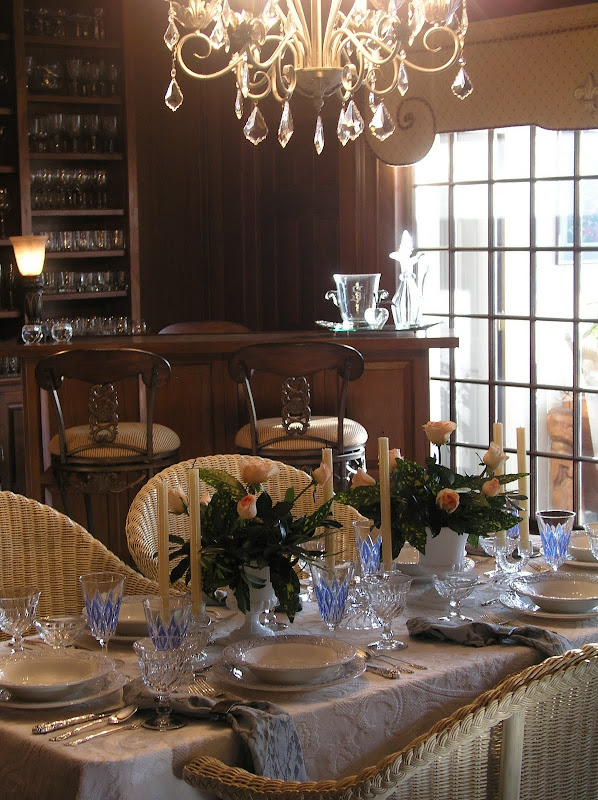 The oil painting with the black vase and fruit is one I did as a demonstration for a local art group. It was a lesson on backgrounds I did from memory of a Helen Van Wyk televised demonstration. If you don't know who she was, and you're interested in painting based on classic principles, Google her. She was quite a lady, such an inspiration to so many aspiring painters! 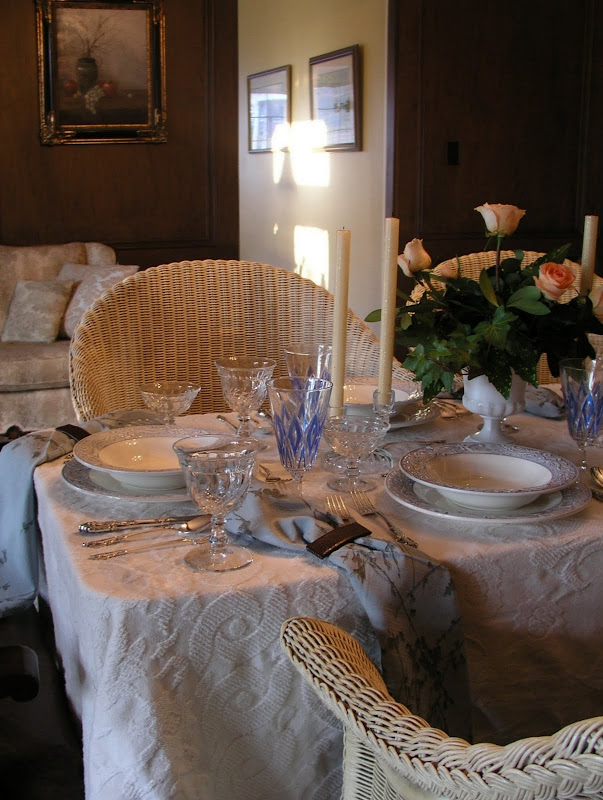 Time for a fire to chase the chill from the room ... 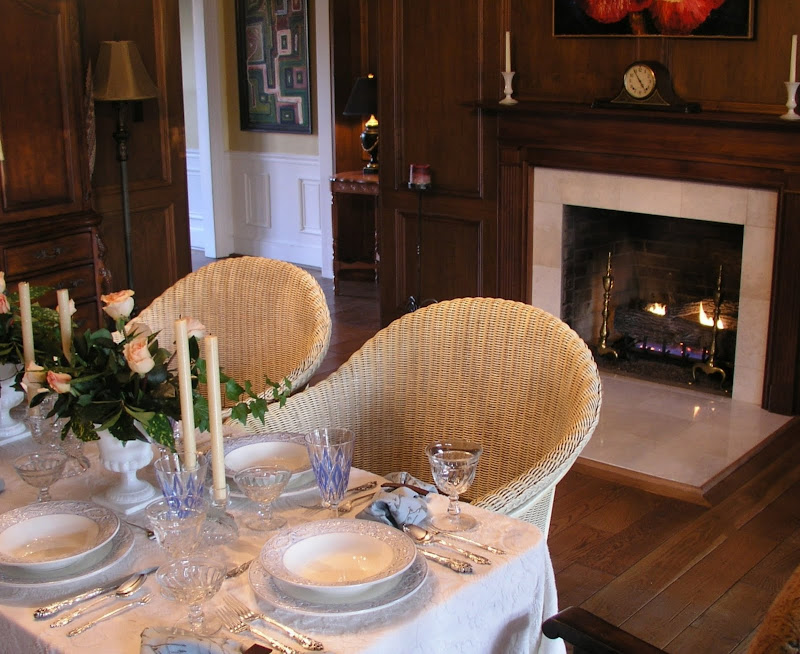 The napkins are by Calvin Klein. I found them at a recent moving sale. They were from T. J. Maxx, unused with the price tags still in place. I used leather hair clips for napkin holders. They were unused too, by the way! Just in case you were worried ... ;)

I've read that napkin rings originally were used so each family member, with his or her own napkin ring, conserved soap and water by reusing the same napkin for many meals. These days, fortunately, they're purely decorative! 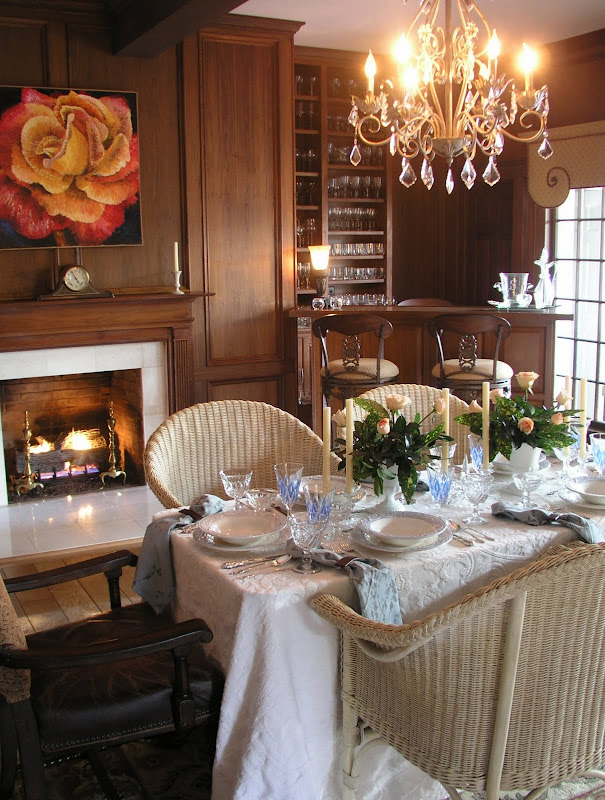 These dozen roses were reduced to only $2.99. I almost didn't buy them, because they looked so awful! I removed lots of drooping outer petals to give them a quick "face lift." The greenery is from the garden. I re-cut the ends of everything before placing it in wet floral foam (oasis), which I'd pre-soaked in water. 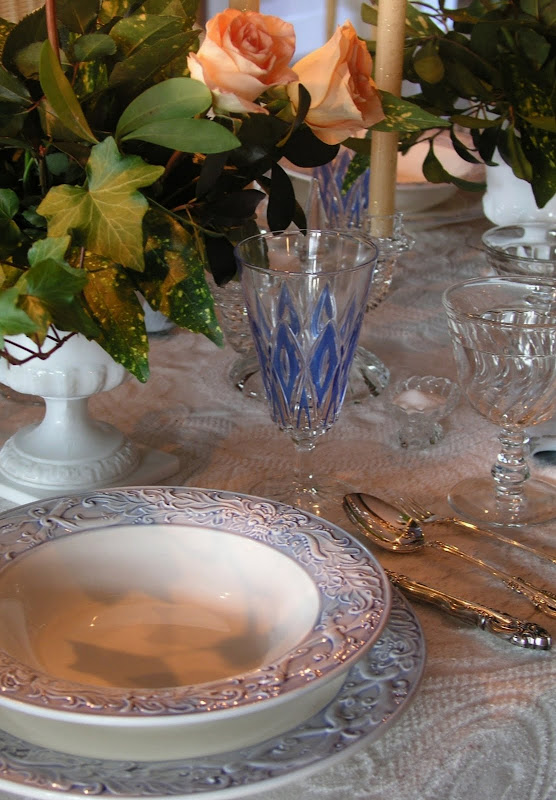 Not bad for over-the-hill, bargain roses. Do you agree? There were actually only 11 ... hmmmm. Perhaps one had disintegrated completely! 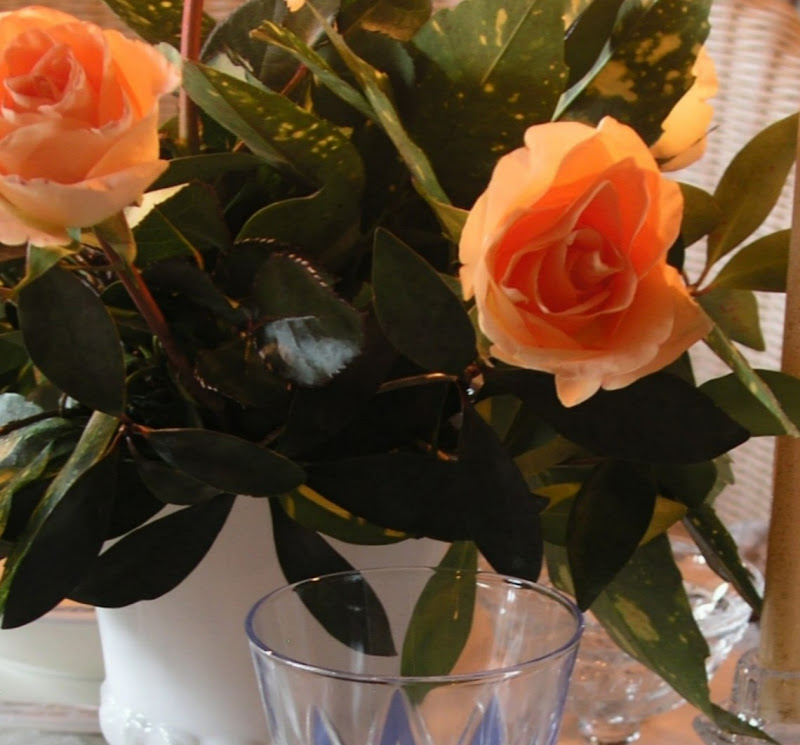 I used dishes and glassware that are dishwasher-friendly, but I DID use the good silver. This table is set for a company meal after all! It's La Scala by Gorham (still an active pattern). Some people put silver flatware in the dishwasher, but I never would. To me, it's not with the risk of damage. 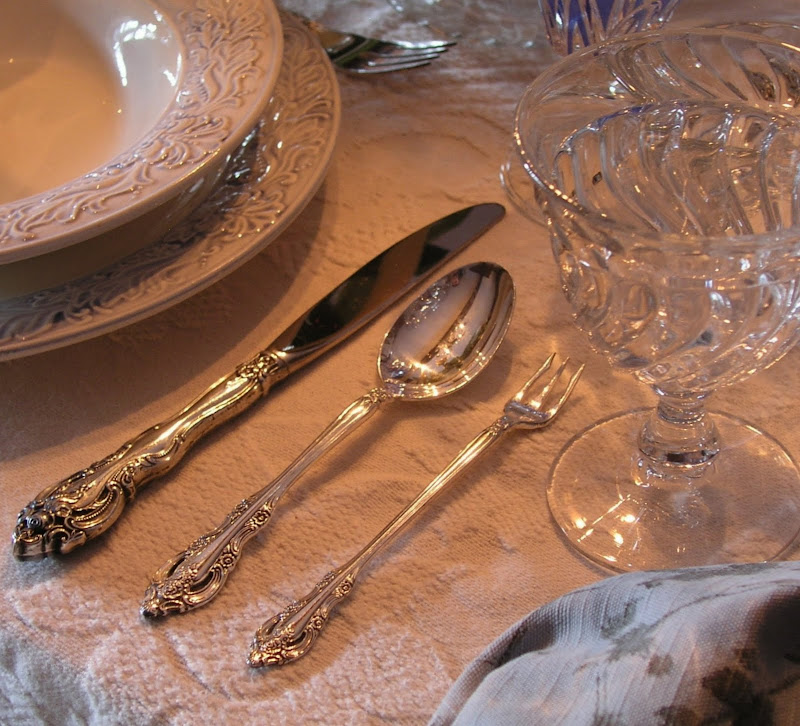 The dishes are Charter Club's Country Chateau, made in Portugal for Federated Department Stores in the 1990s. I purchased 12 dinner plates, 12 salad plates, and 12 bowls for just under $10 at Goodwill. One dinner plate (the solid white version of this pattern) goes for $47.99 on Replacements.com! 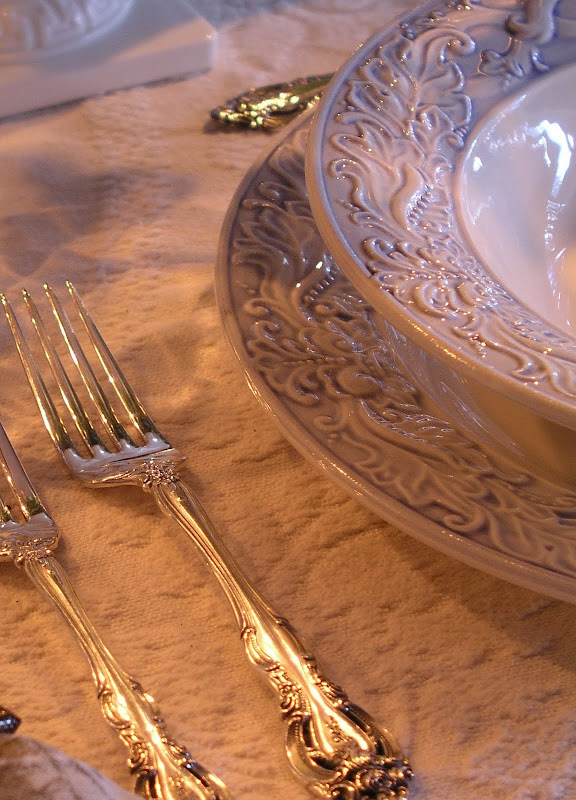 Not quite dark yet ... but let's light the candles. 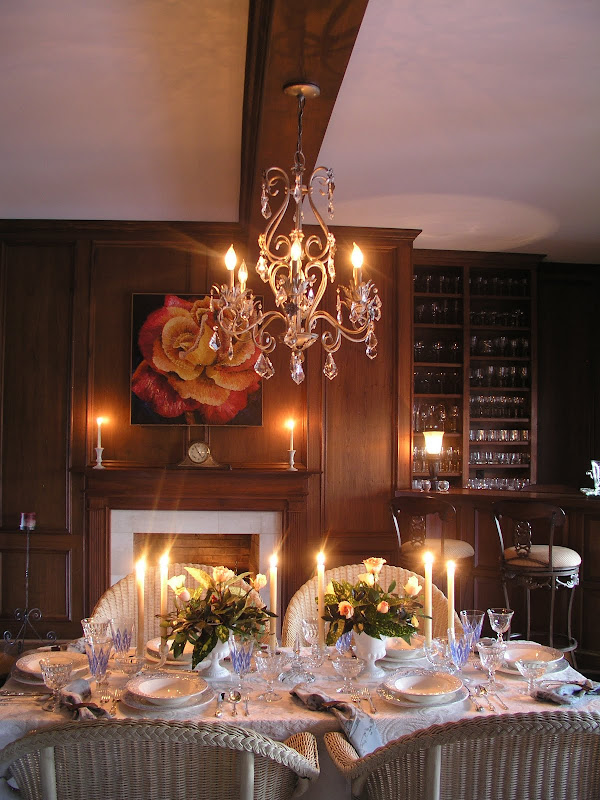 Soon it will be time for guests to arrive (ignore what the clock on the mantel says!). By the way, my mother bought the clock for my father as a Christmas gift approximately 40 years ago. It was already 30 years old at the time. He gave it to me after her death. It keeps perfect time ... if I remember to wind (and start) it. Its one idiosyncrasy is that it strikes 3 at both 1 and 3 o'clock. You get used to it ... 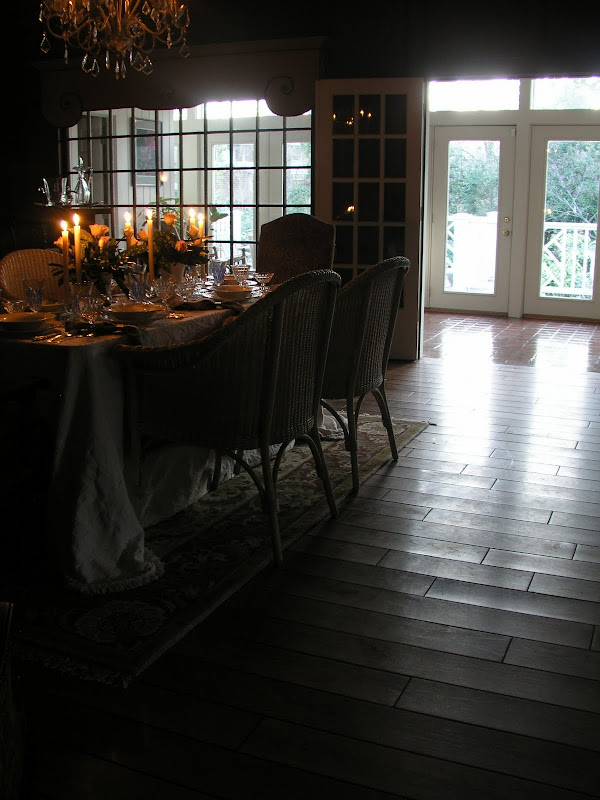 It's amazing how burning candles and faded roses can make a folding table in the den ... set with Goodwill dishes ... on an old bedspread seem almost romantic, isn't it? 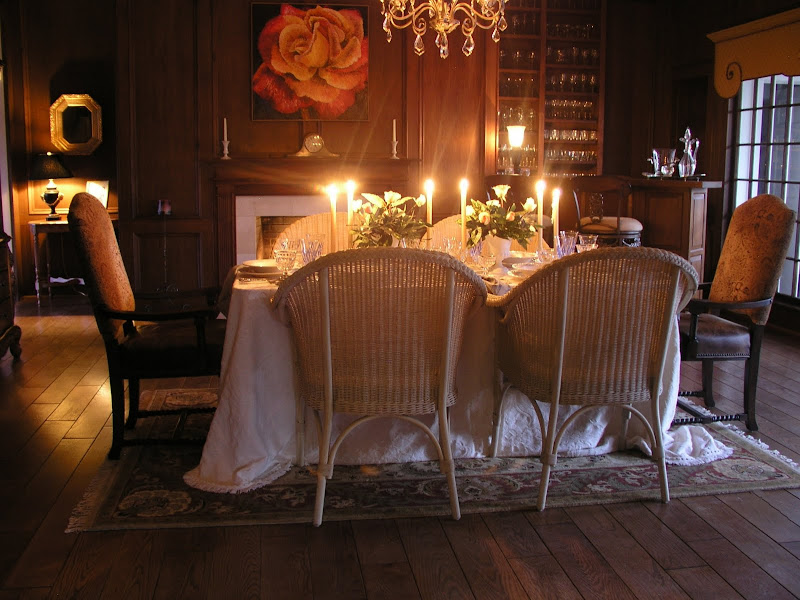 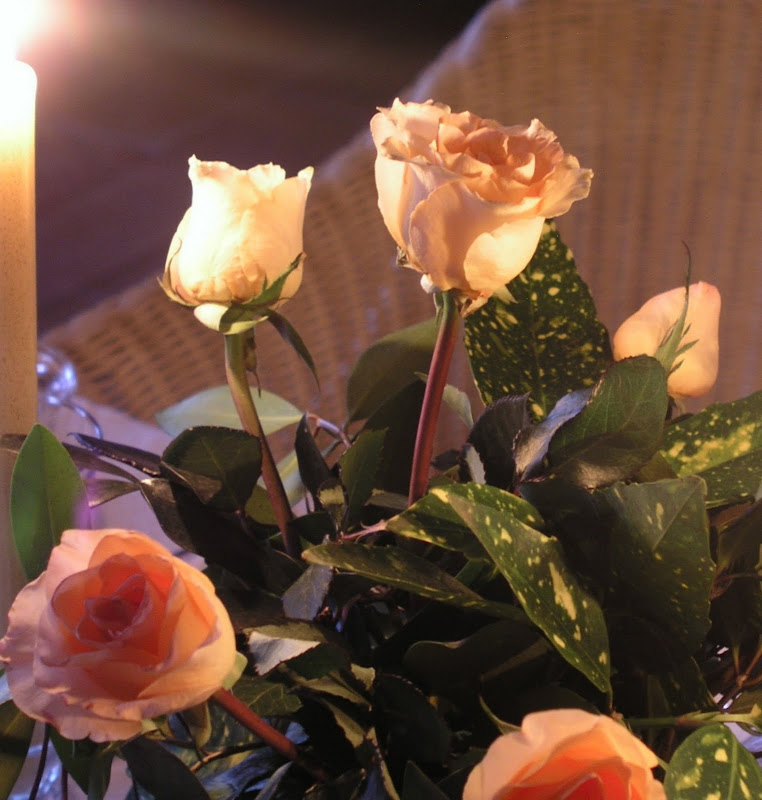 I liked the shadows sweeping across the table ... Especially the shadow of the ivy leaf on the bowl ... 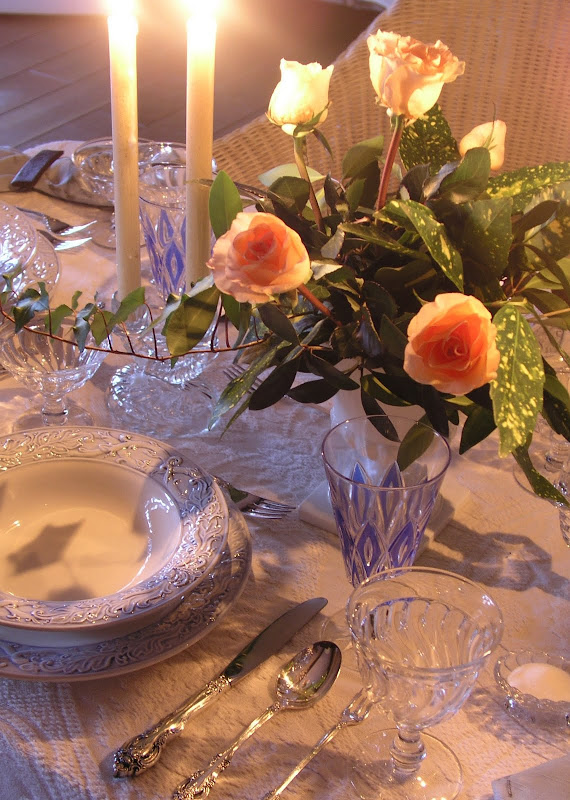 Hope you've enjoyed stopping by for dinner in the den! 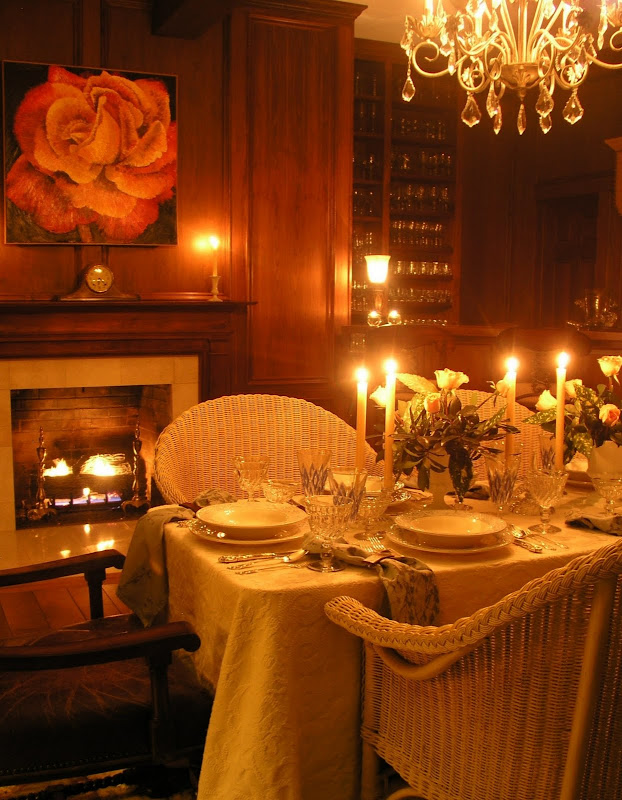 I take a LOT of pictures for you each week. Is this a mosaic gone mad? 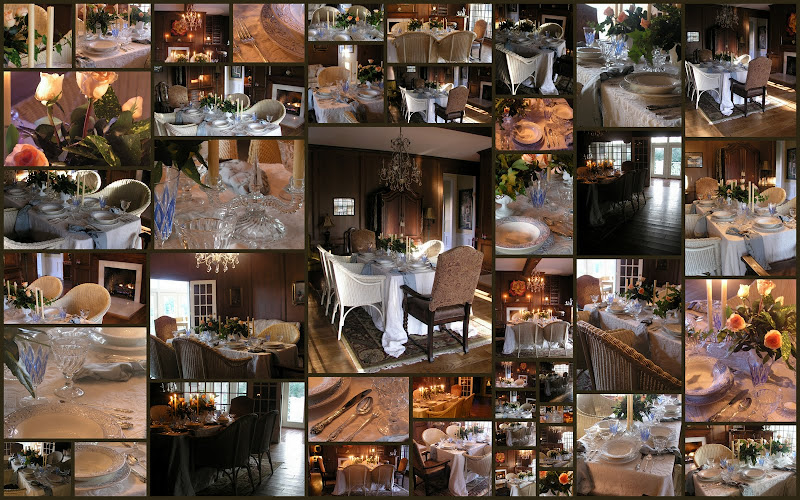 Happy Tablescape Thursday! Check out all the talented tablescapers at Between Naps on the Porch. Thank you, Susan, for bringing together so many kindred spirits. We're fortunate to have you! See you all next week ...