When I e-mailed Beverly of How Sweet the Sound to inquire about participating in "Pink Saturday," I assumed it might be something I'd try NEXT week ... not now! But she graciously said she'd add me to the list of Pinks. Then I had to think pink .... and think fast!

The first thing I thought of was the big crepe myrtle in front of the house. I went out and cut a few of the low-hanging blooms. As I was headed inside, I noticed several other pink blossoms of various types. The casual arrangement below is the result. If you're a gardener, you can probably name the various components (one or two I'm a bit unsure of myself). The urn came from an antique mall and cost $5. The round "chop plate" in the foreground (holding rolls in a napkin) is by Theodore Haviland. The pattern is "Apple Blossom." The little round dish with the hibiscus bloom is from Goodwill and cost around fifty cents. 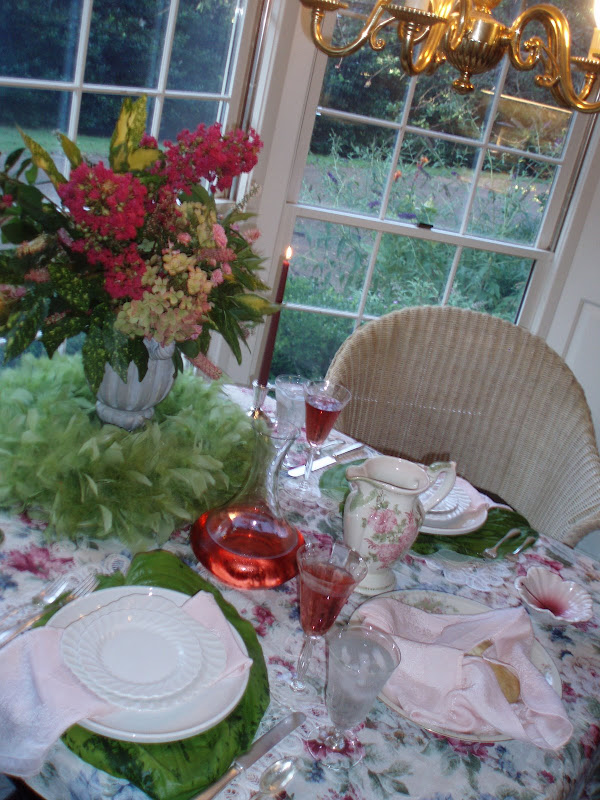 The feather wreath is from Goodwill, and I featured it in one of my first posts. The ironstone plates on top of the stack are also GW finds. The pattern is "Snow White Regency" by Johnson Brothers. The large plates used as chargers are from Crate & Barrel. The pink flowered tablecloth was a yard sale find (the same one I used for "Morning Coffee on the Terrace"). 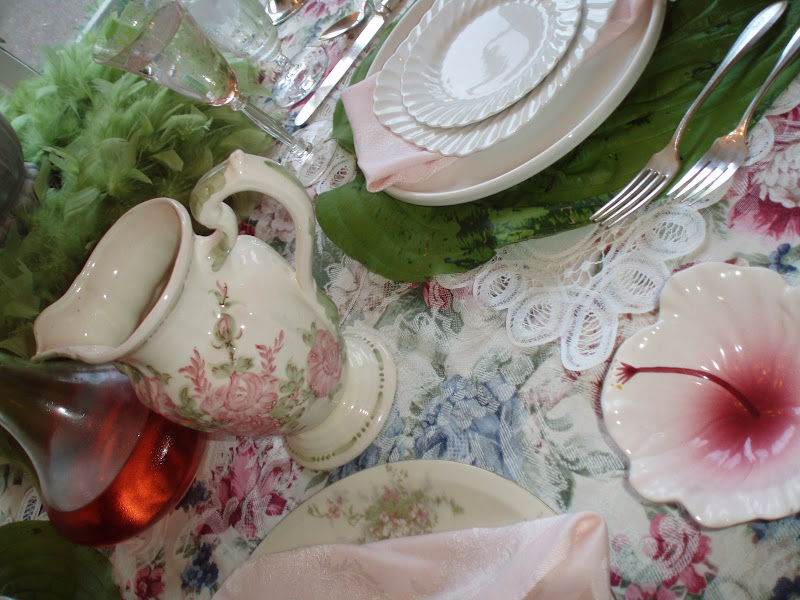 The lace placemats are from a yard sale, and the "Sum & Substance" hosta leaves are from .... the garden. The flatware is "Patrician" by Oneida, introduced in 1914. I paid around $15, plus shipping, on eBay for a service for 10. It has an intitial engraved on it (an E or an H ... difficult to tell). I suppose that's why no one else bid on it ... it's one of the reasons I like it! 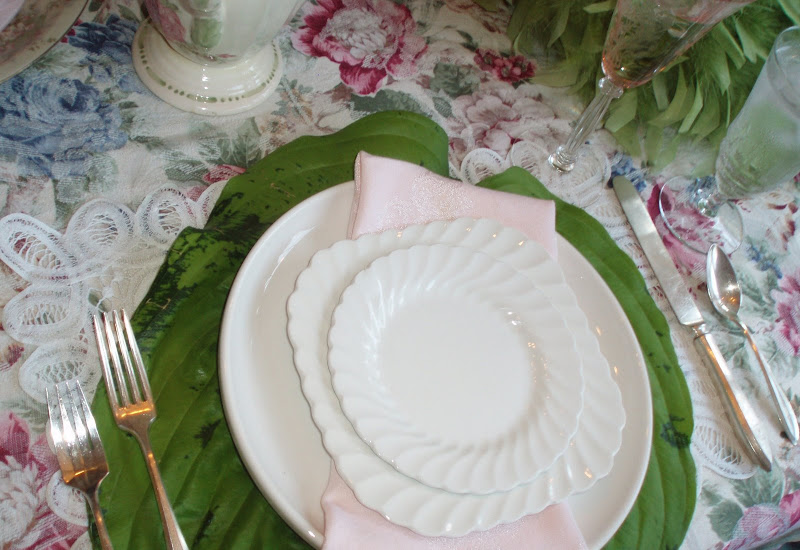 The pale pink damask napkins were an estate sale bargain. The simple decanter was $1 at a local thrift store. The glasses are "Flanders" by Tiffin. The pattern was introduced in the 1920's.
They had rim chips, which I filed down to make them usable. I'll show you how it's done in a future post. 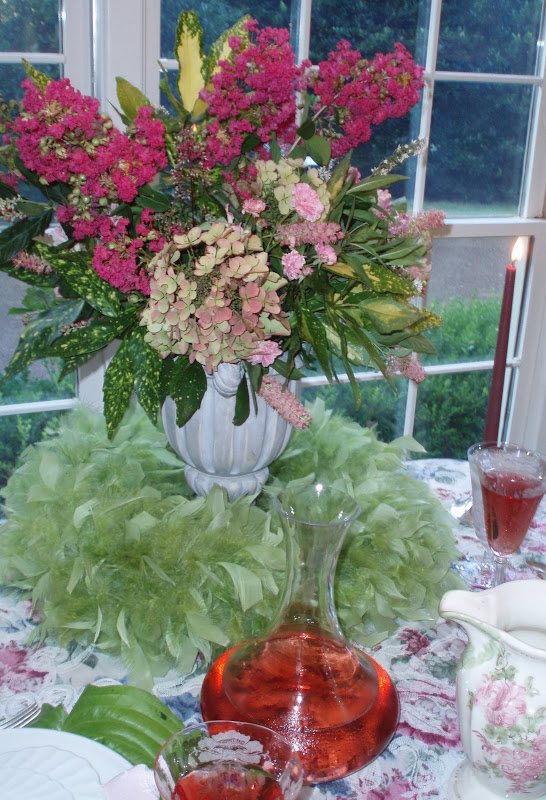 The pitcher is made by Cash Family-Clinchfield Artware Pottery. Cash was a small company in Erwin, Tennessee. Family members had worked for Southern Potteries, manufacturer of Blue Ridge dinnerware. All the pieces were hand-painted. In it's heyday, Southern Potteries was the largest manufacturer of handpainted dinnerware in the world. Both Blue Ridge and Cash pieces are highly collectible (and not terribly expensive). 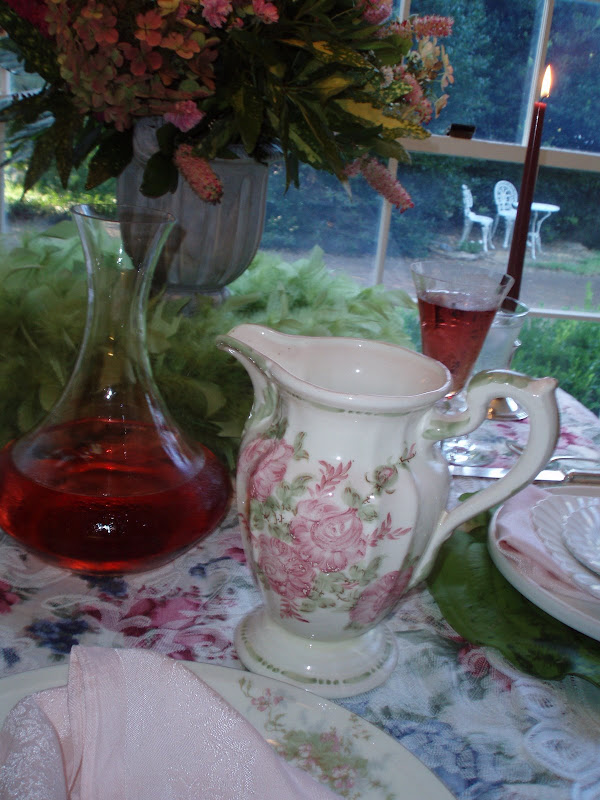 It's nice to have fresh flowers from the garden, isn't it? 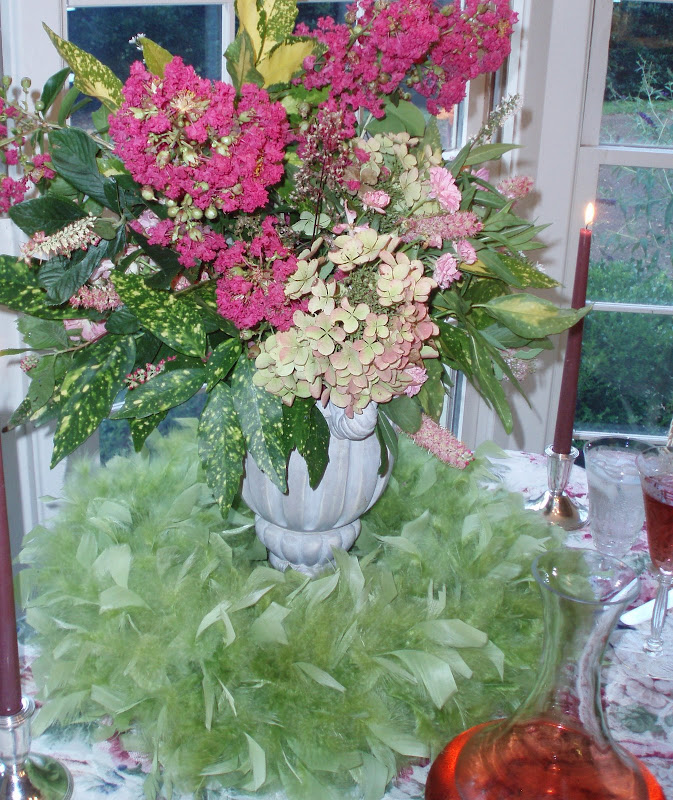 After the "Pink" shots were taken, only the flowers remained. The Gorham silverplated candleholders were 2 for 49 cents at GW. 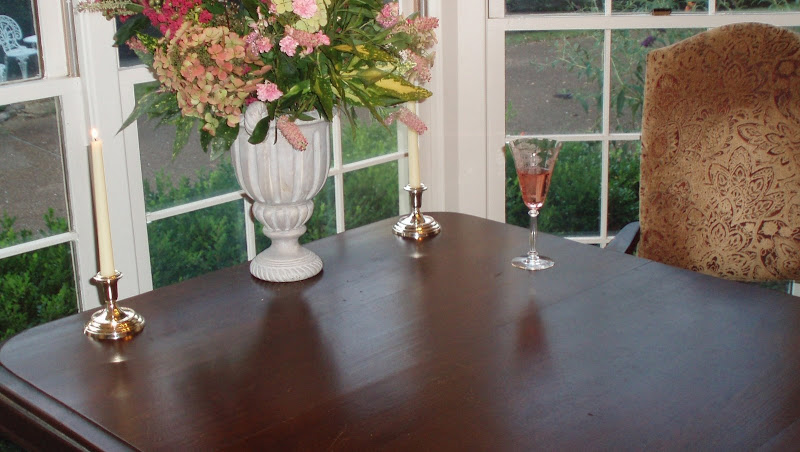 I hated to waste the large hosta leaves, so I used one to line this vase. Most of the daisies were left from this week's "Tablescape Thursday" post. 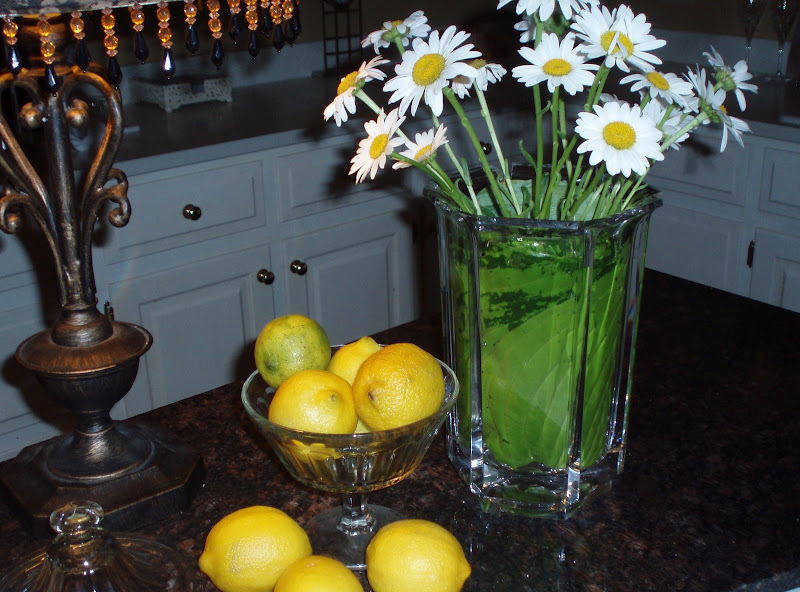 Hope you enjoyed. See you next time!