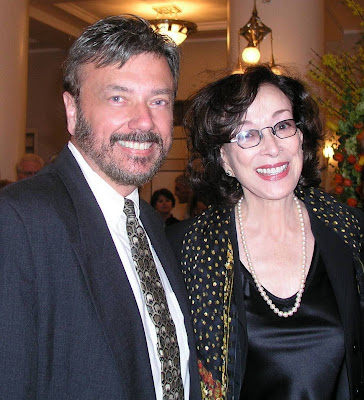 Did the title get your attention? Ms. Dixie and I smiled for the cameras at the 2007 Tennessee Arts Commission’s Governor’s Award in the Arts reception held in Nashville at the beautiful Schermerhorn Symphony Center. The West Tennessee town of Huntingdon was receiving an award for creating the Dixie Carter Performing Arts and Academic Enrichment Center (“The Dixie,” home of the Hal Holbrook Theater).

Did you know that the first season of Designing Women has just (finally!) been released on DVD? Season 2 is coming soon. Could anyone who watched the show ever forget Dixie Carter as Julia Sugarbaker delivering her signature line, ending with “… the night the lights went out in Geor-JUH!”? Anyway, she’s absolutely lovely, charming, and gracious in person.

My friend Judy and I posed next to one of the over-the-top, and undoubtedly NOT inexpensive, floral displays used that evening. Judy and Ms. Dixie were school chums 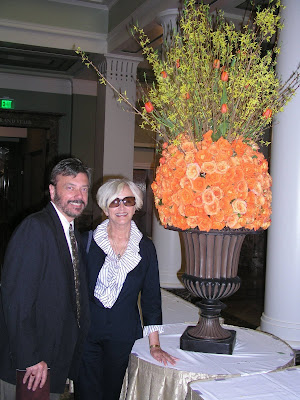 at Huntingdon High School and have remained friends through the years.


There is a point to all this – an affordable way to create colorful, festive, and dramatic flower arrangements for a reception, an entry hall table, or a dining room sideboard. I’ve done this several times using clear glass vases I purchased when they were 50% off at Hobby Lobby. The 30” vases in various shapes were on sale in the $15 to $20 range. They’re also great for tall arrangements of gladiolus, forsythia, etc. 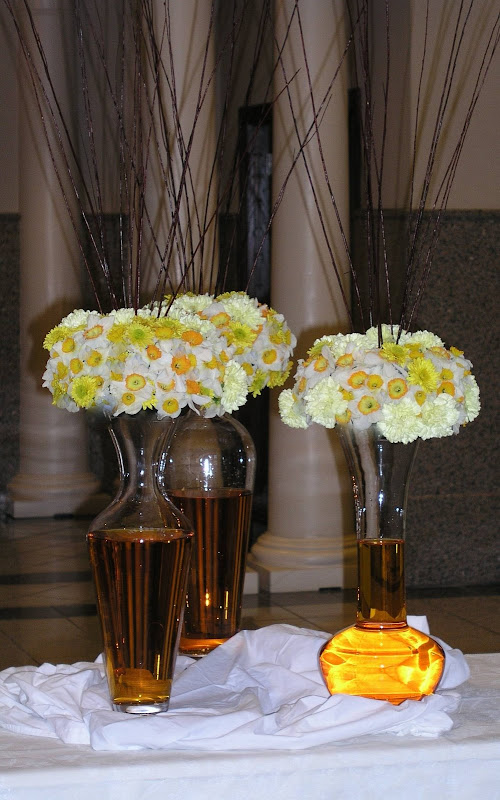 This look starts with partially filling the vases with water tinted with food coloring (in whatever shade suits your fancy). I used round black take-out containers to hold two blocks of floral foam (oasis) that I’d cut into rounded shapes and soaked in water. You could use whatever kind of plate or shallow bowl you think will be least visually obtrusive.
Next, cut the stems really short and cover the oasis with blooms. I used daffodils from the garden (the price was right, and they’re so cheerful and fresh-looking). The picture was taken on Day 2, when the arrangements were to have been used for a second event. I learned quickly that daffodils don’t hold up as well as some other types of flowers. I made an emergency trip to the supermarket for a mixed bouquet of yellow and white flowers to fill in where many of the daffodils had drooped.
I’ve done this technique since then using mums, carnations, and gerber daisies. They hold up MUCH better and are still relatively inexpensive.
The “sticks” at the top add height and drama. You could also use corkscrew willow or branches of Spring trees when they’re in bloom. I recycled some of the ones in the photo by spray painting them gold to use atop my Christmas tree.
I hope you’ll comment and tell me about famous friends, flower arranging triumphs … or near-disasters, or even which episode of Designing Women is your all-time favorite!