It's time for Tablescape Thursday, hosted by the inimitable Susan of Between Naps on the Porch! Be certain to visit Susan and all her talented participating guests (and leave a comment!). I'm also joining Michael at Designs by Gollum for her Foodie Friday. Scroll to the bottom for an old-fashioned pie recipe.

Stop by and visit Michael to see what everyone else has been cooking up this Friday!I hope you enjoy what I've prepared for you today. Read on ....


This table could have been set for you by a bride in the mid-1930’s, using gifts from her recent wedding. The period is one of my favorites for tabletop design.

Neoclassicism, Art Nouveau, and Art Deco all came together, resulting in the production of china, crystal, and silver that were elegant, functional, and glamorous. Think in terms of sets and costumes of films starring Fred Astaire & Ginger Rogers (who did everything Fred did ... only “backwards and in high heels!”).

As Americans struggled to survive the Great Depression, going to a movie theater to experience such films as theirs provided an inexpensive and welcome escape from everyday reality. Interestingly, weddings began to develop into their modern, extravagant form during the Great Depression. As couples and families spent less, and marriage rates declined in the 1930s, businesses launched an aggressive marketing counter-attack and idealized certain features of an expensive wedding.

Brides magazine was founded in 1934. Ads began touting bridal registries. With an initial emphasis on luxury goods, registries reinforced the message that fine store-bought items such as linens, china, and crystal were de rigueur in order for the bride to be outfitted properly. 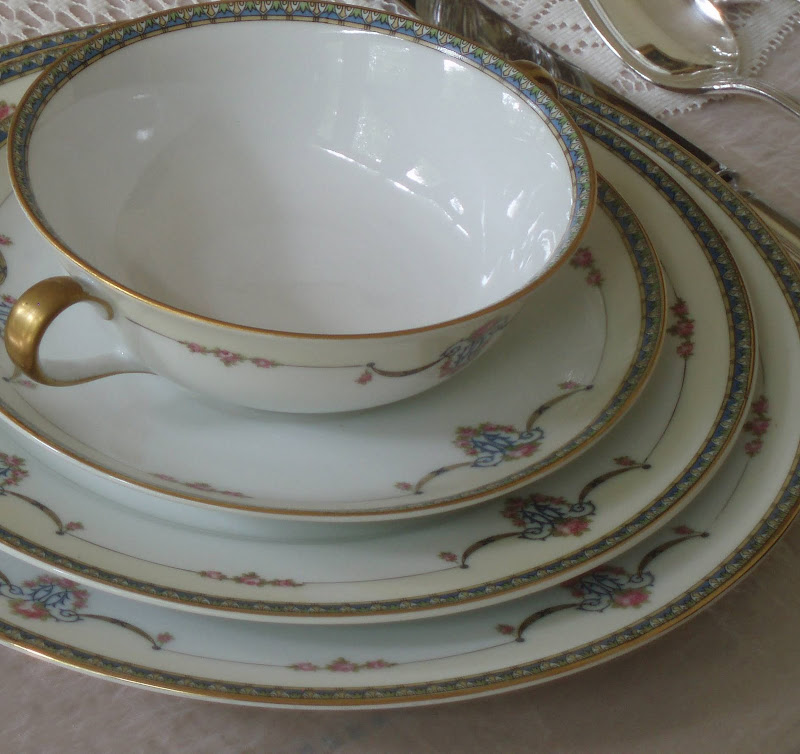 The pattern was designed in New York and manufactured in Japan especially for export to the United States.

A visit by Baron Ichizaemon Morimura IV to the 1900 World's Fair in Paris helped shape the idea of trying to manufacture high quality, modern, western style dinnerware in Japan for export. In 1904 the Nippon Toki Kaisha Ltd - the forerunner to the present Noritake Company - was formed. The factory was located near a source of good and plentiful raw materials and in a community rich with skilled potters. The site was the small village of Noritake near Nagoya, the center of Japan's ceramic production, on the main island of Honshu.

The backstamp: The letter “M” in the wreath stands for Morimura. “N” for Noritake was not used until 1953. The Japanese parent company did not officially change its name to the Noritake Company, Limited until 1981. Evidently, since Noritake is the name of a place, the company was initially prohibited from registering the word as a trade name. 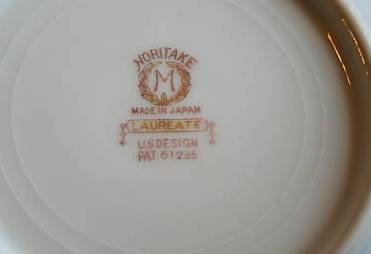 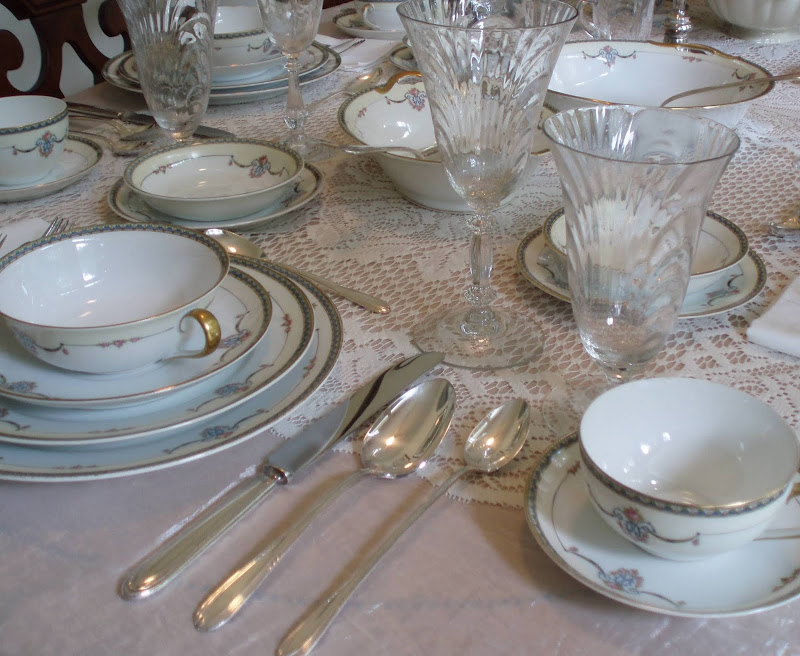 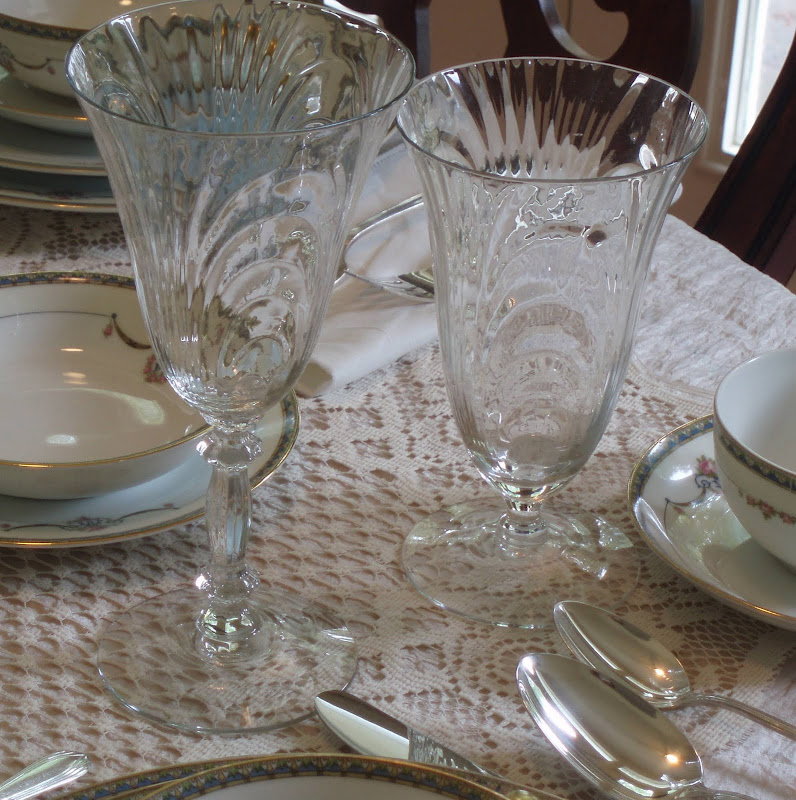 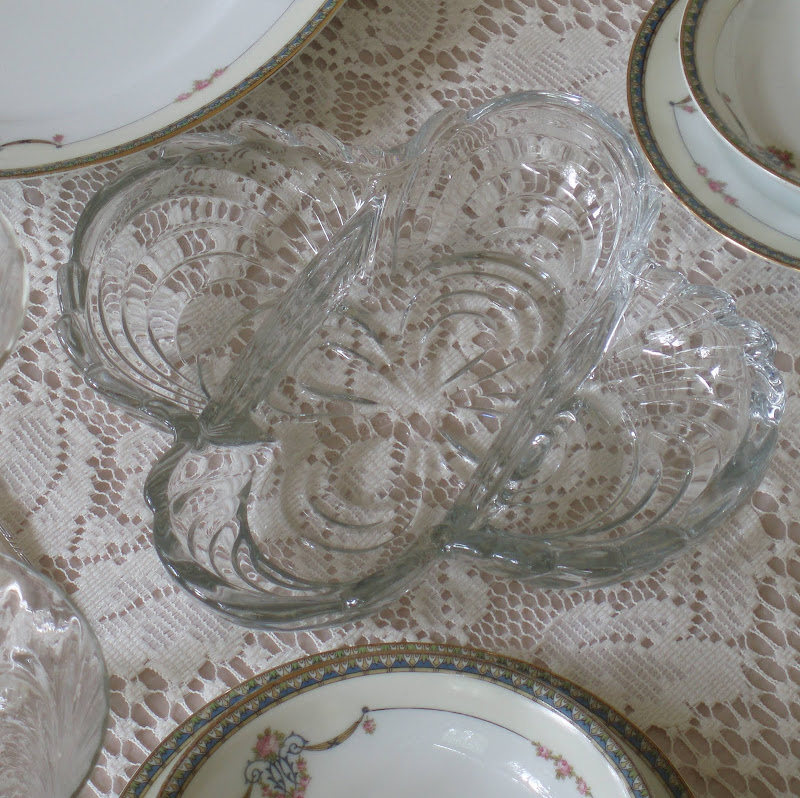 "Laureate" serving bowls. I like the gold trim and the shape of the handles. These dishes came from a local estate sale. It had been Mrs. Hamilton's wedding china. 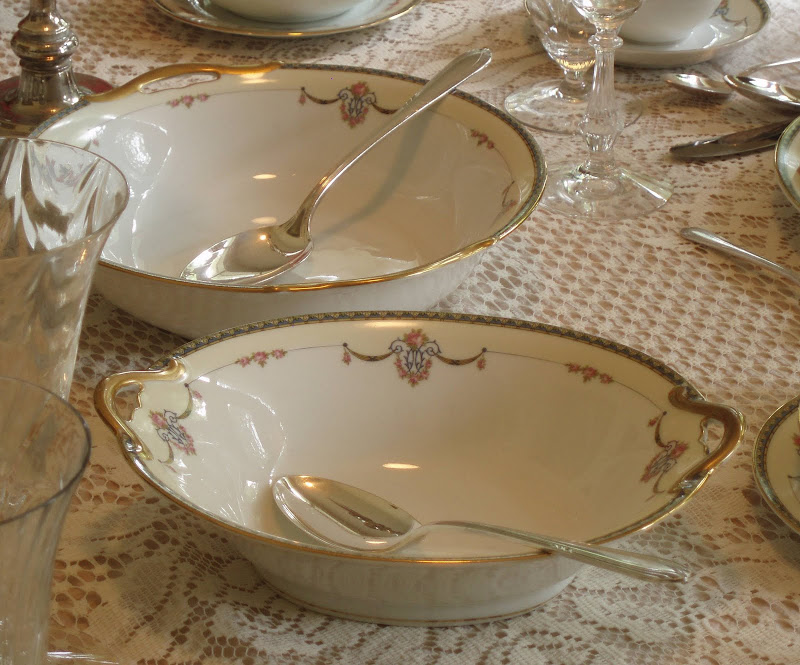 Looking down at a place setting. I re-purposed one of the bouillon cups as a sugar bowl. 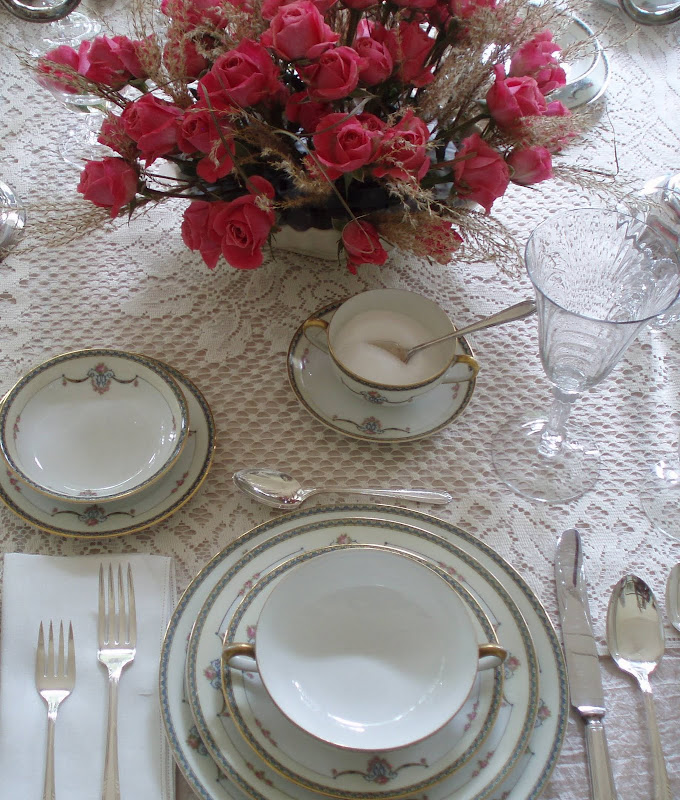 The centerpiece contains almost 60 rosebuds. They're long-stemmed spray roses from the supermarket (Kroger), and they only cost $5.99! They're arranged in a low oval Lenox bowl (from Goodwill). I made a grid of scotch tape across the top of the container. Three small pieces of floral oasis under the tape help keep the flowers upright. I added plumes from ornamental grasses to lend softness, include a touch of Fall, and act as a filler. 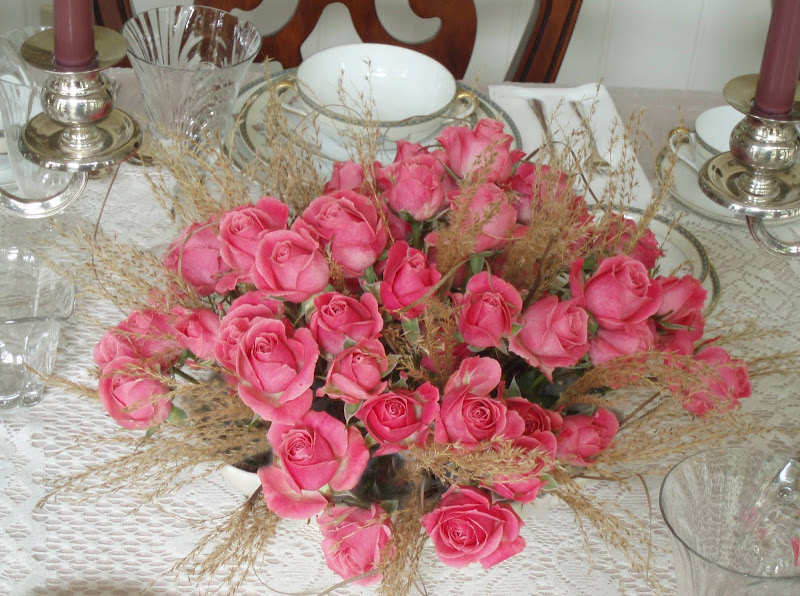 The modern-looking, blonde chairs didn't feel right, so I exchanged them for some from the dining room. 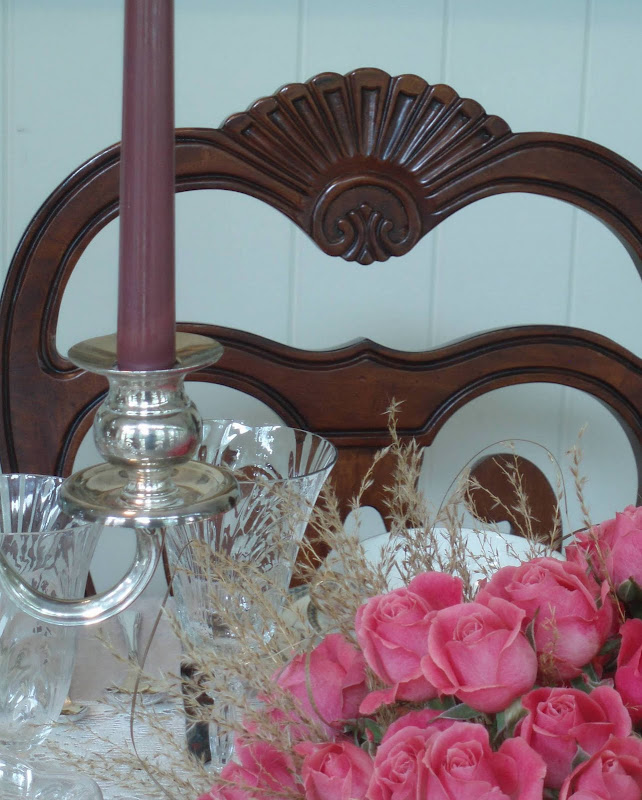 I brought in upholstered armchairs from the breakfast nook for the ends of the table. In the upper left corner, you see one of the paintings that normally hang in the solarium. 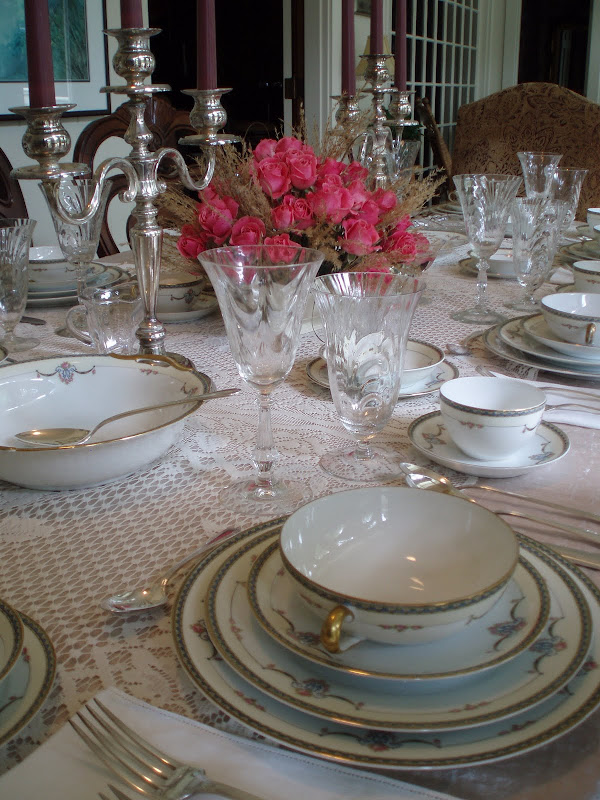 I think the 1930's bride would have preferred something more formal and traditional in terms of artwork. This painting, purchased from a local antique store, seems more appropriate for this dinner party. Who says we can't rotate the art in our homes? This change creates a very different ambience, and moving it didn't cost a penny! 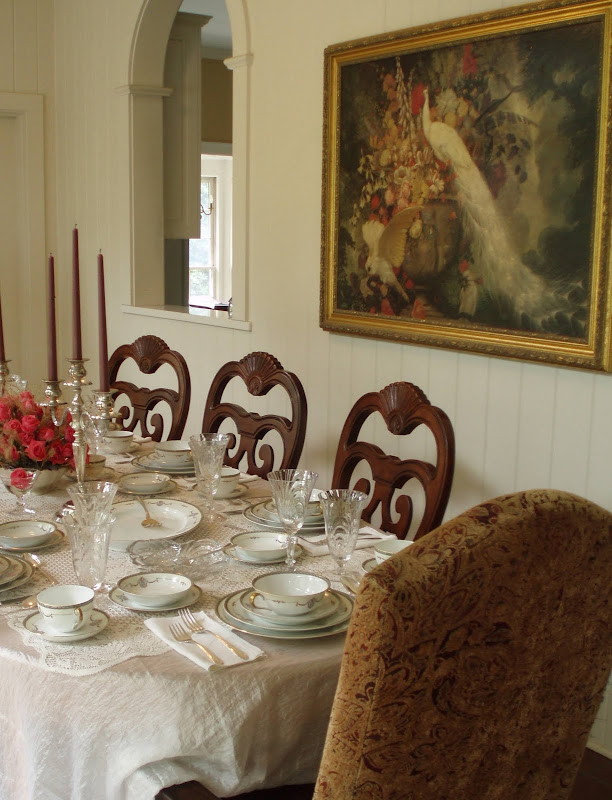 The painting normally resides in one of the bedrooms. I like it both places. The dark-colored candles provide additional color and contrast against the lighter walls and table linens. 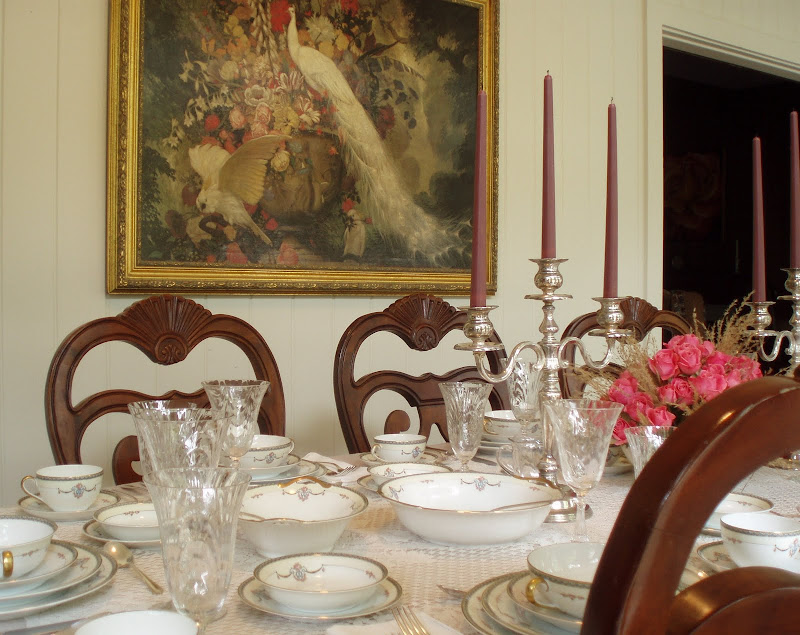 The now-expected view from above: 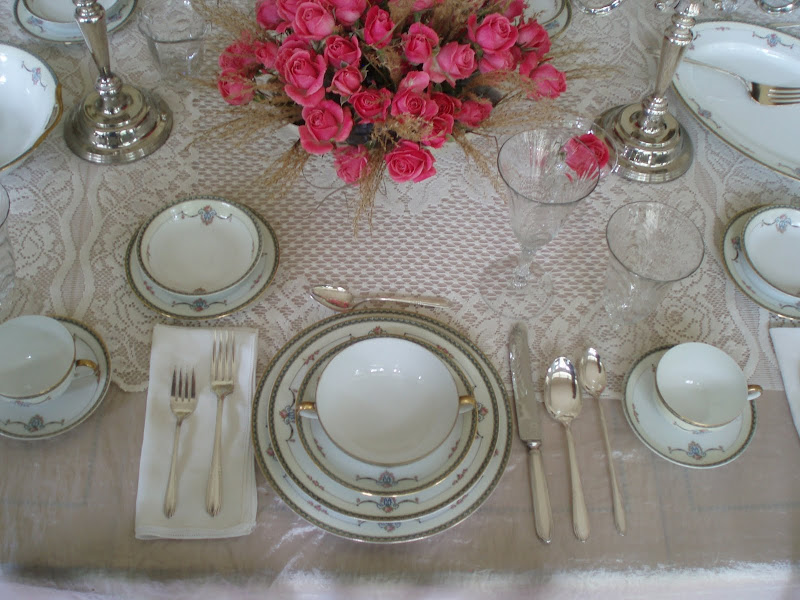 The "tablecloth" is a piece of shimmery, crinkly semi-transparent fabric from Hobby Lobby. I didn't bother hemming it ... just cut the ends neatly. The "runner" is a three-panel section of machine-made cotton lace. An inexpensive lace curtain panel would serve the same purpose. 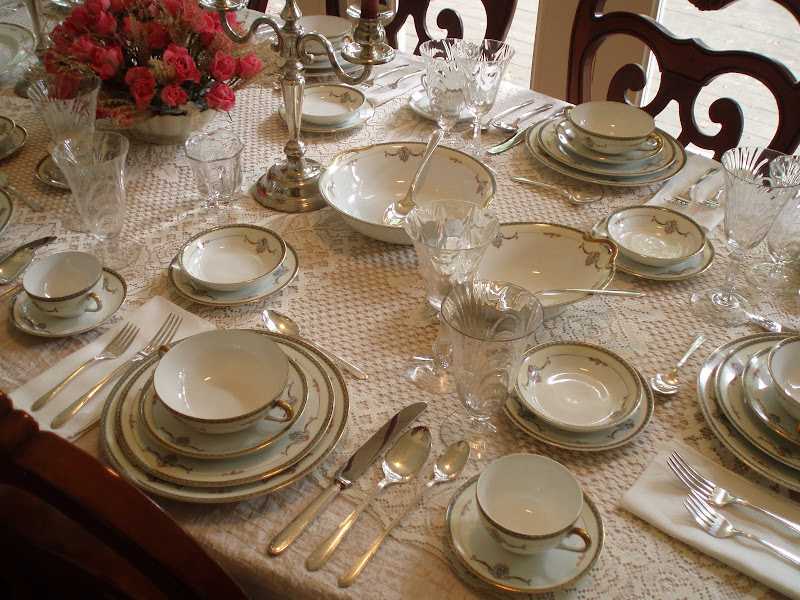 A closer view of the flowers: 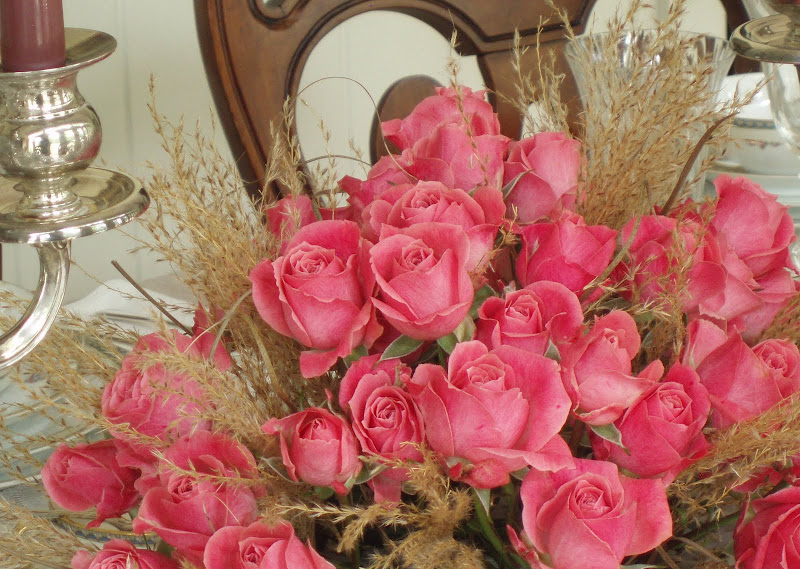 Backlit in the late-afternoon sun: 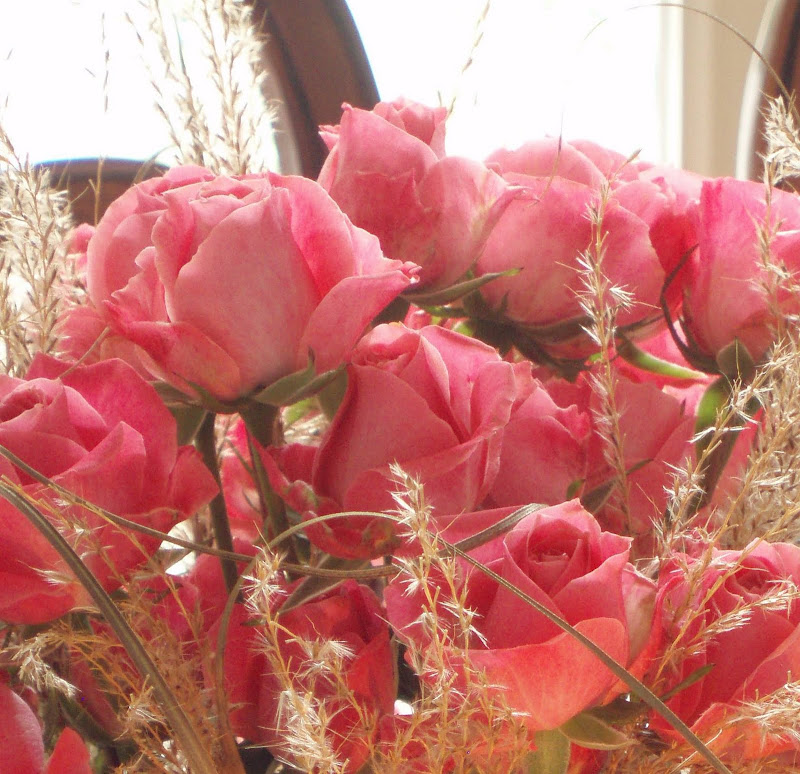 It had been a gloomy day, and I literally RAN to the camera (already atop the tripod) to capture these shots when the sun peeked out from behind a cloud! 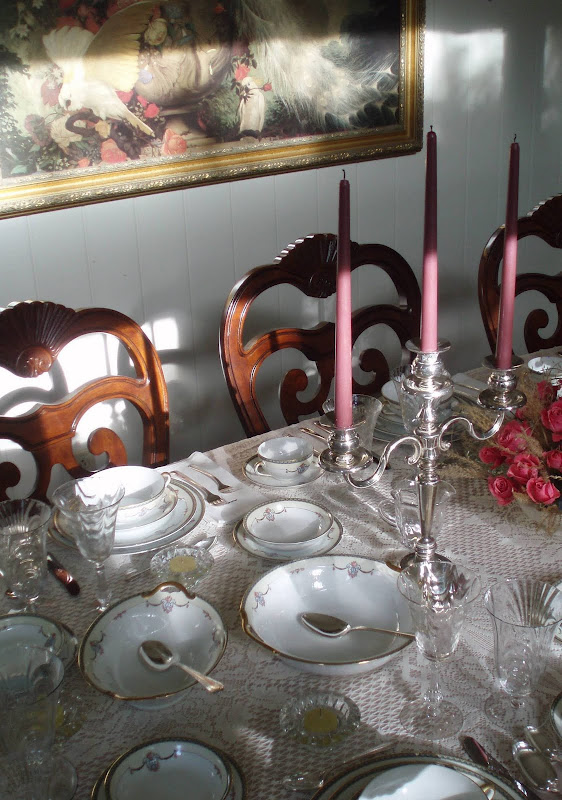 Time to light the candles ... 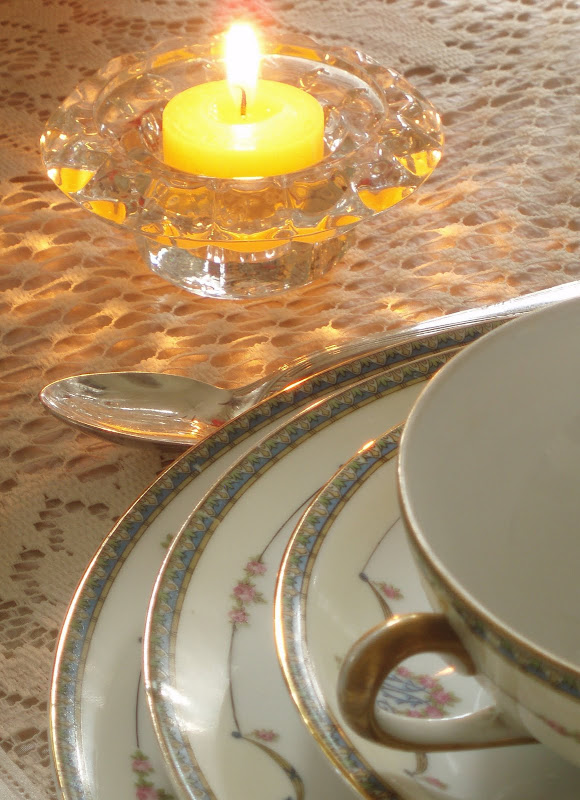 The tealights create a soft glow even before the sun goes down ... 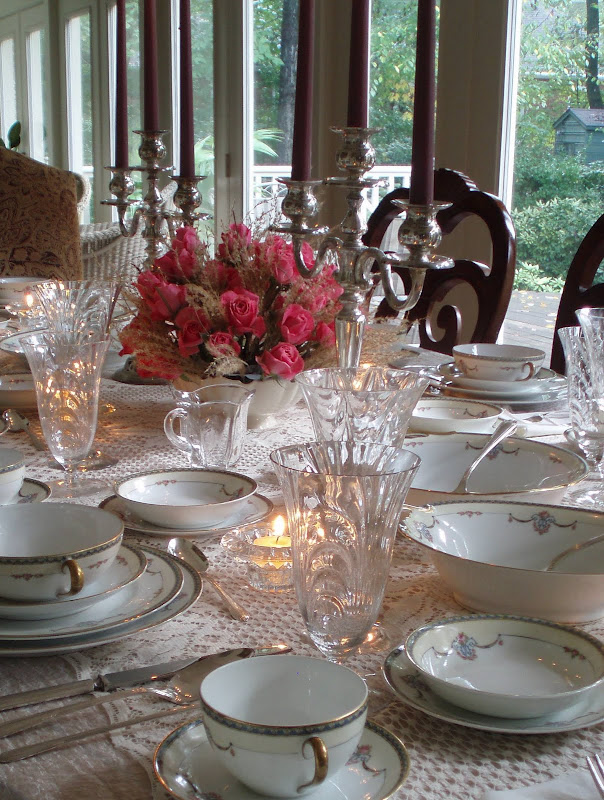 Closer view of the candles' flames reflected in the glassware: 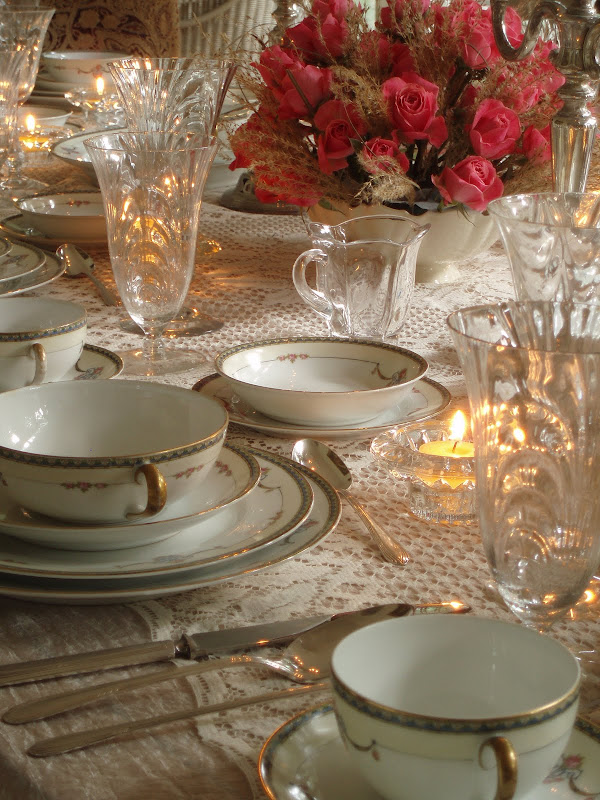 And closer still ... I like the way "Caprice" captures the effect of cascading water. It was a popular pattern for years. The blue version is considered especially collectible. 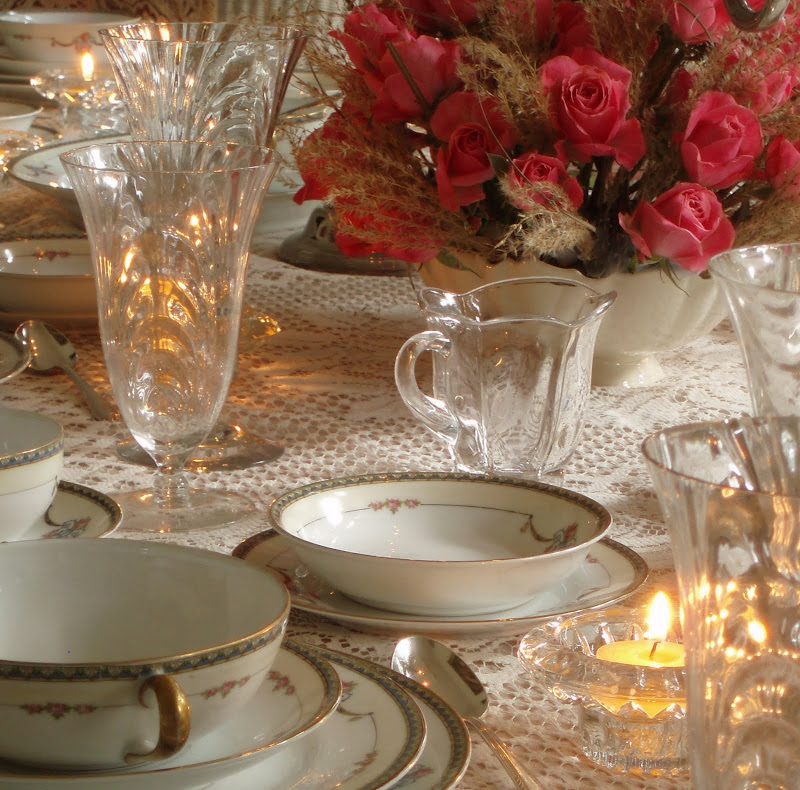 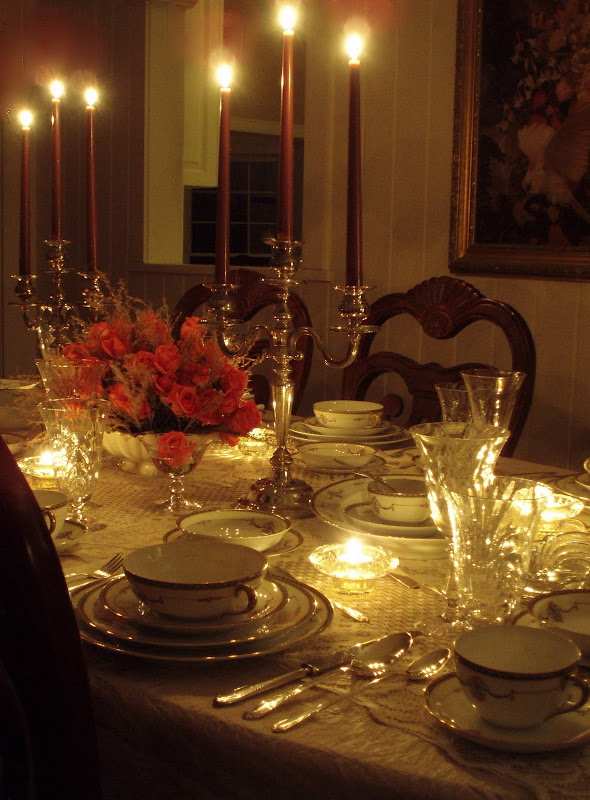 Looking down the table ... 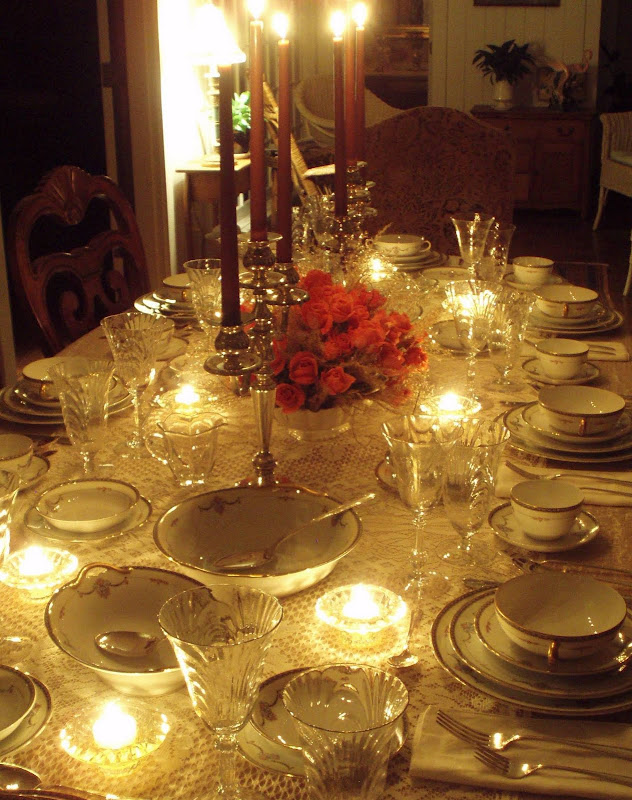 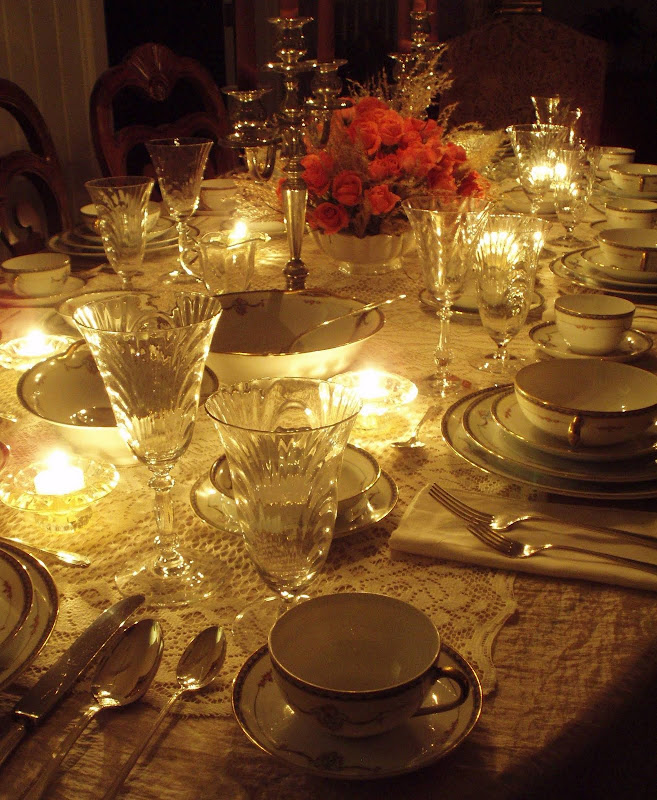 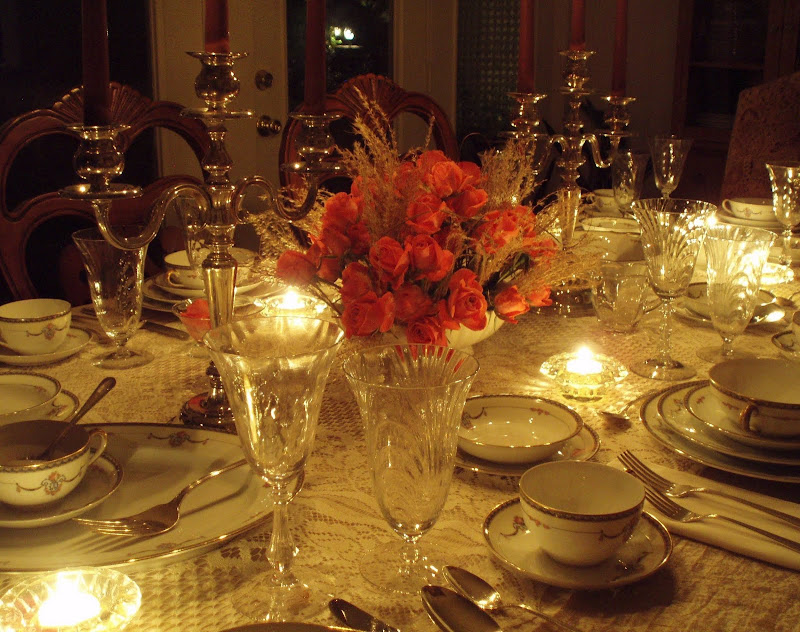 It's time for a confession ... I did some subtle mixing-and-matching when I set this table. How many of you noticed that I alternated the Cambridge "Caprice" tall water glasses (which I'm using here as wine glasses) with a different pattern? The second pattern is "Wavecrest" by Fostoria, 1935-1943. Wavecrest has a loop optic pattern, as opposed to Caprice's swirled optic, and the stems have a different shape.

I also used two types of cream soup bowls. The ones on the ends have the Noritake backstamp. The trim at the upper edge is on the inside of the slightly outward-flaring rim. The three on each side of the table are a slightly different shape, and the trim is on the outside. The backstamp reads "Field, Made in Japan." When I saw them in a local antique shop, I was certain the pattern was "Laureate." I assume they were made by Noritake and private-labeled for an American retail store or distributor (clicking on Field china on the Replacements, LTD website re-directs visitors to Noritake). I could tell they'd been in the shop for quite a while (dusty!). Cream soup bowls tend to be expensive but, fortunately, I was able to purchase these for a reasonable price.

I hope you've enjoyed my 1930's "dinner party." Do you have similar items (purchased or inherited) from this era? Do you ever rearrange furniture or rotate artwork when you're preparing to serve a special meal to your guests?

I'll be using the table setting (slightly simplified) for a dinner party this evening. I baked two pies this morning before work. It's an easy recipe for an old-fashioned pie my mother used to serve frequently when I was growing up. Naturally, she made her own pie crusts (and I CAN ... but, when the refrigerated ones are such tasty time-savers, I seldom go to the trouble these days).

OK, it's pretty much a "sugar pie," and that's before any toppings are added!

1/2 cup brown sugar (I use half dark brown/half lt. brown)

Mix all ingredients, pour in pie shell, and bake at 350 for approximately 40 minutes.

I doubled the recipe to make two pies and (before baking) sprinkled chopped pecans on one. Guests can choose "with," "without," or one of each! I like to top this pie (especially when it's still warm) with caramel/praline ice cream, whipped cream, and drizzle it with a coffee liqueur such as Kahlua. I've had no complaints from guests so far! 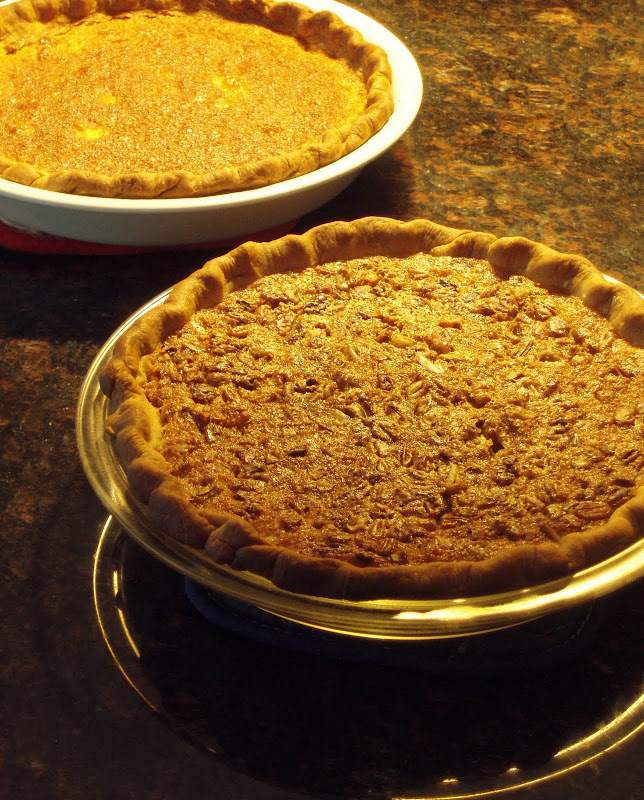 Thank you for stopping by. I'd love to hear from you!