It's time for another Outdoor Wednesday at A Southern Daydreamer. I hope you'll stop by, say hello to Susan, and check out all the other participants. Thank you, Susan, for making this event possible.
I haven't participated in a while. It's good to be back! Today, I'd like to share what I think is one of the most interesting streets in Jackson, Tennessee. A consultant's report stated that:

The city should value East Main Street as a gateway from downtown to East Jackson’s residences, and from East Jackson back into downtown. This street is a “corridor of history” immediately adjacent to downtown that showcases some of the finest historic houses—of different styles—that can be seen on any block, anywhere.

Signs flanking the entrance to the street read:

When "Preservation of East Main Street" began, these houses were crumbling. Many had been divided into apartments. A few brave souls purchased property in what was considered a dangerous area and invested a great deal of time, money, hard work, good taste, and creativity into returning these grand old gems to their former glory. 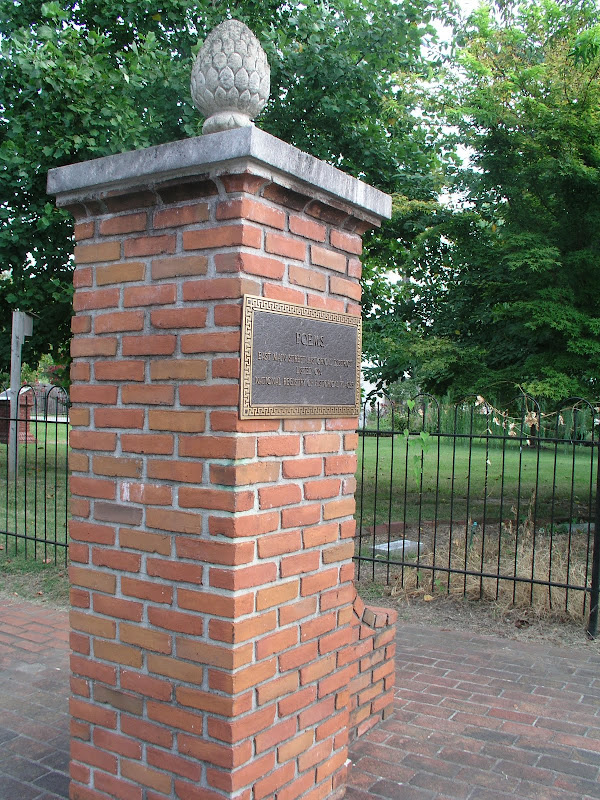 This historic marker is in the neighborhood's park. 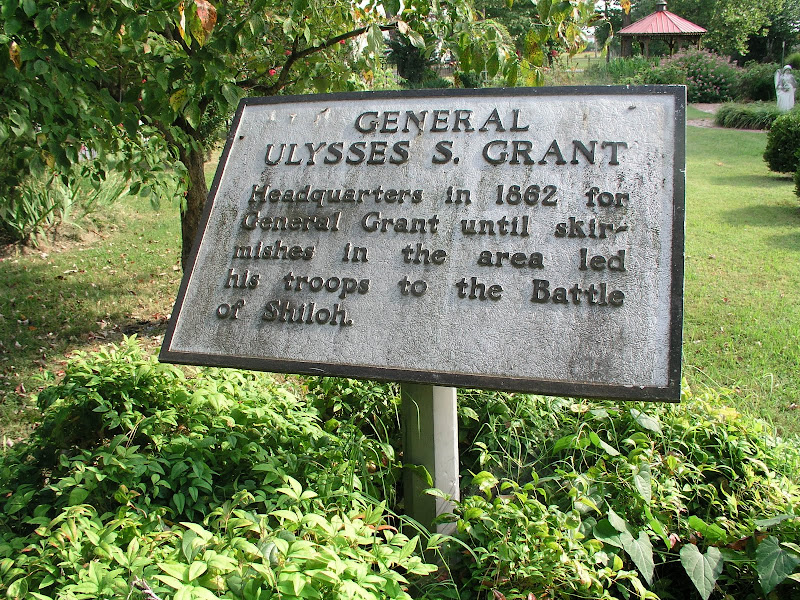 This one is a work in progress. It belongs to a friend who is doing much of the work himself. The first order of business was a new roof, new wiring, and new plumbing. I think it's shaping up beautifully! 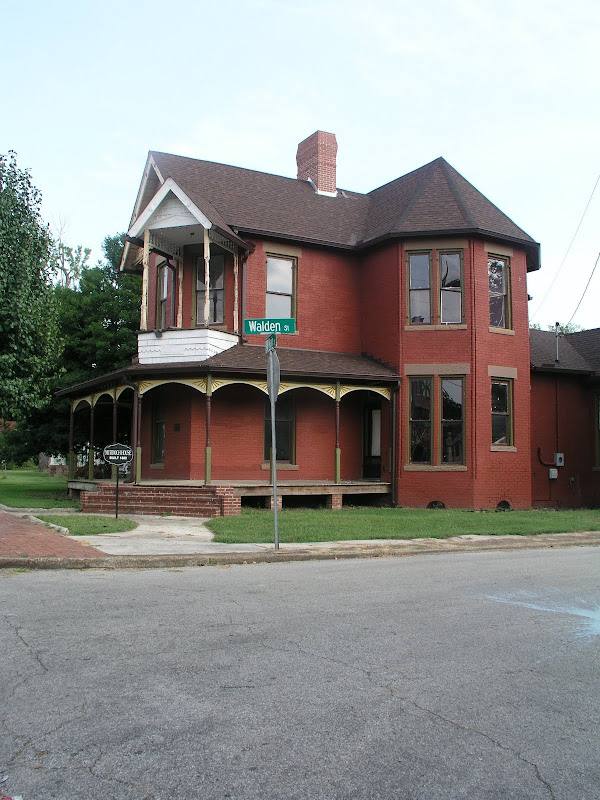 Houses of this vintage tend to need much more TLC than newer homes, but the payoff is living in a home that exudes character and history. The porch on this one is being renovated. 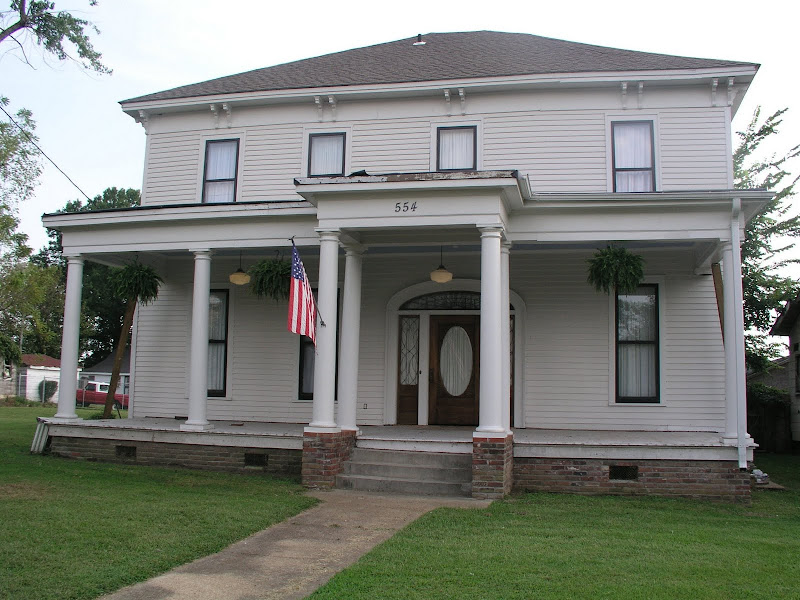 I think this one is a nice example of the Craftsman style. 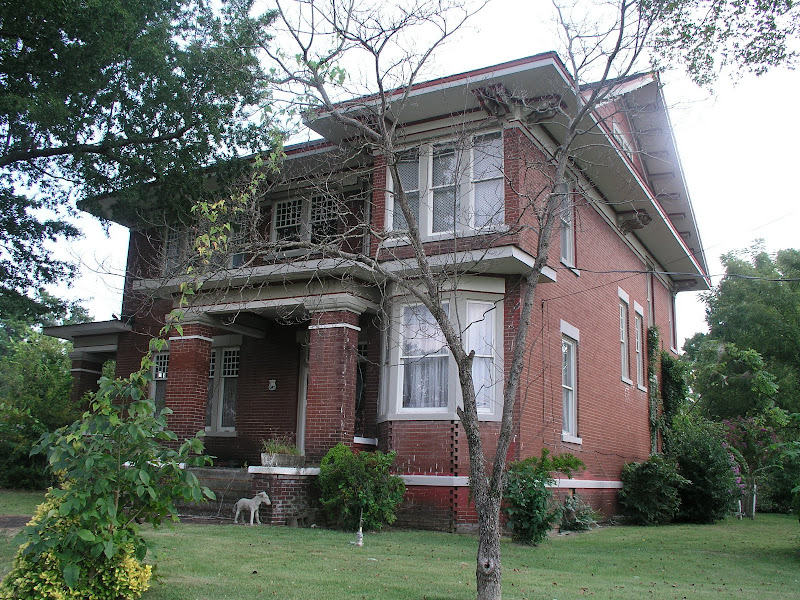 This one was built in the 1850's, so it was among the first. It strongly resembles many of the old plantation homes scattered througout West Tennessee. 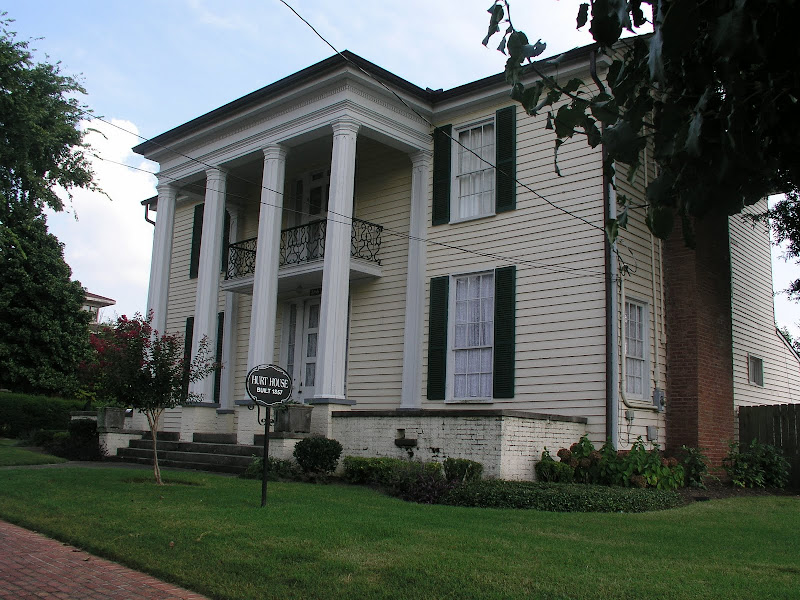 Another great old Craftsman home. Ferns and front porches go so well together, don't they? 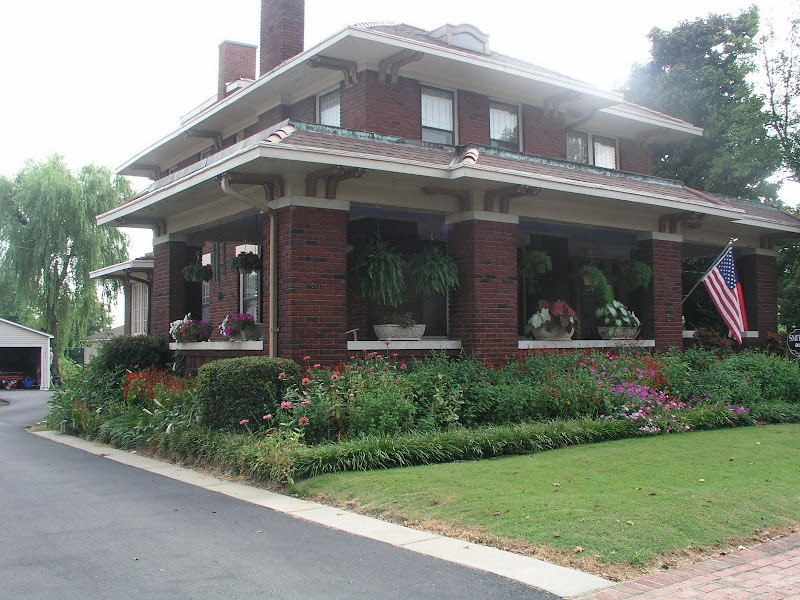 Another of the older frame houses. The shutters and the colors really make this one a stand-out! 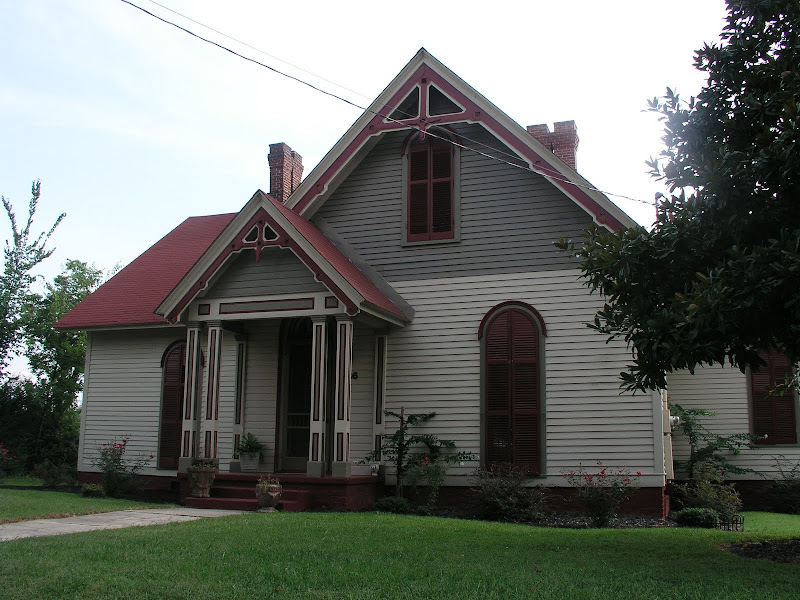 Sadly, for many of the old addresses, it was too late to save them from years of neglect and decay. 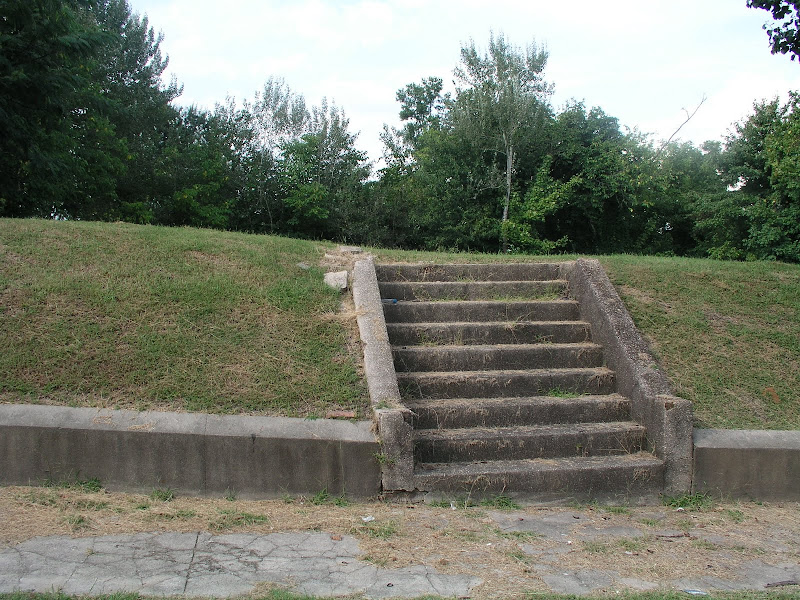 Another set of steps to ... nowhere. 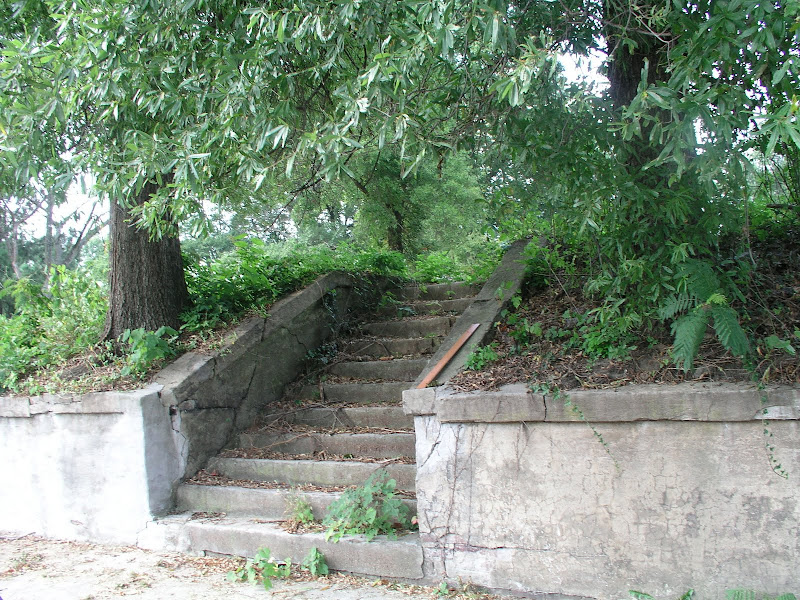 Here's one of the grandest of the Victorian "ladies" on this street! Isn't it fantastic? 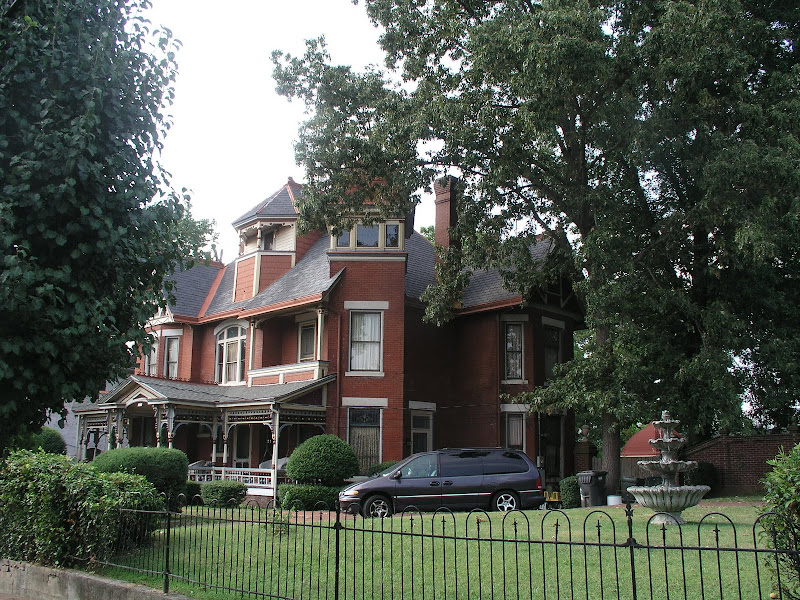 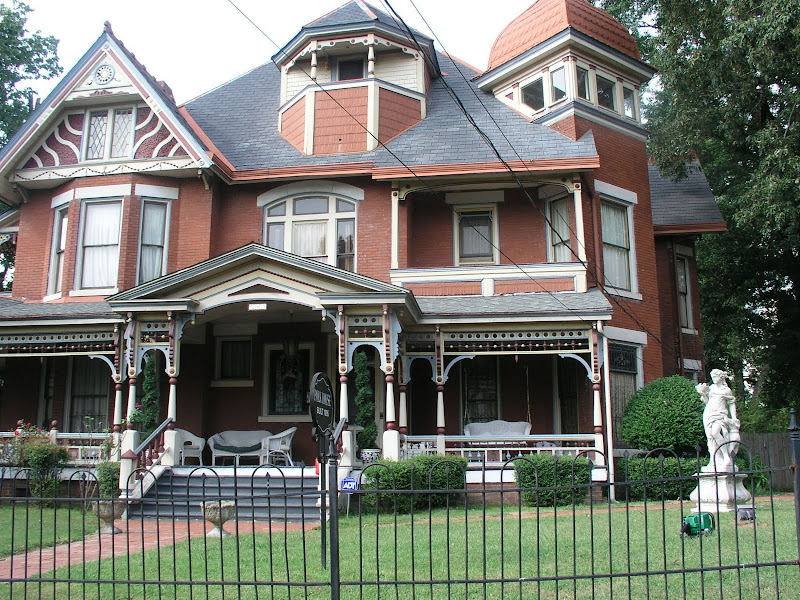 This one looks as if it could be in New Orleans, doesn't it? Being somewhat hidden behind vegetation adds to its mystique. Do you agree? 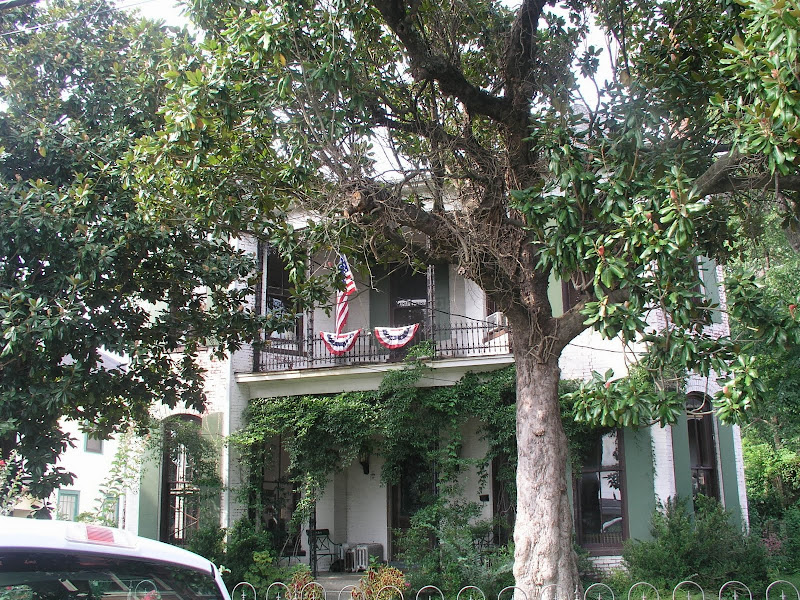 The patriotic owner had decorated for Labor Day. The damaged iron fence is probably a reminder of a disaster that struck this street a few years ago. 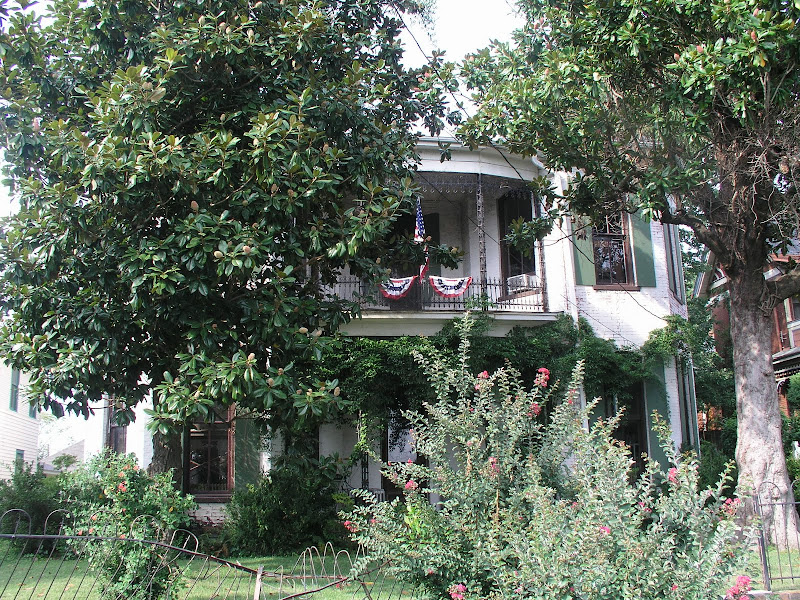 This is one of my very favorites. The portico sat in the front yard for a couple of years. It's good to see that repairs are well under way. 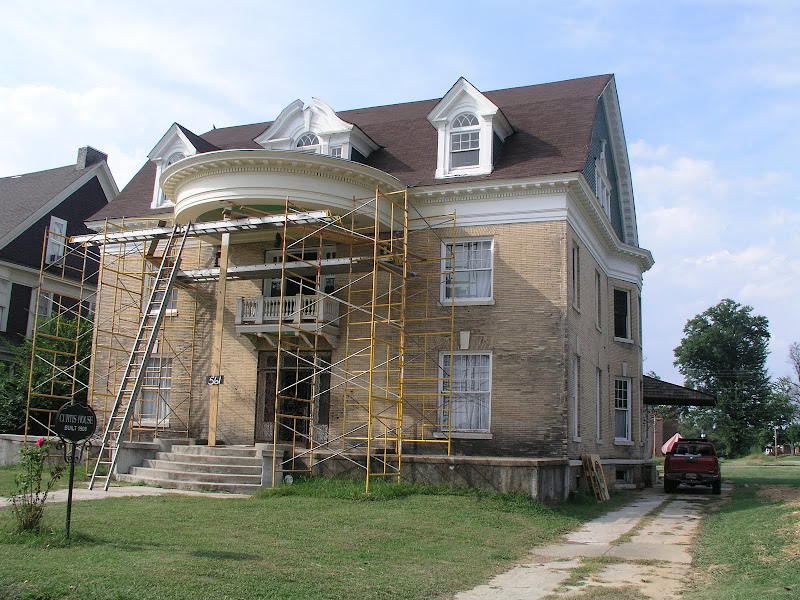 I had to show you a second view of this one! 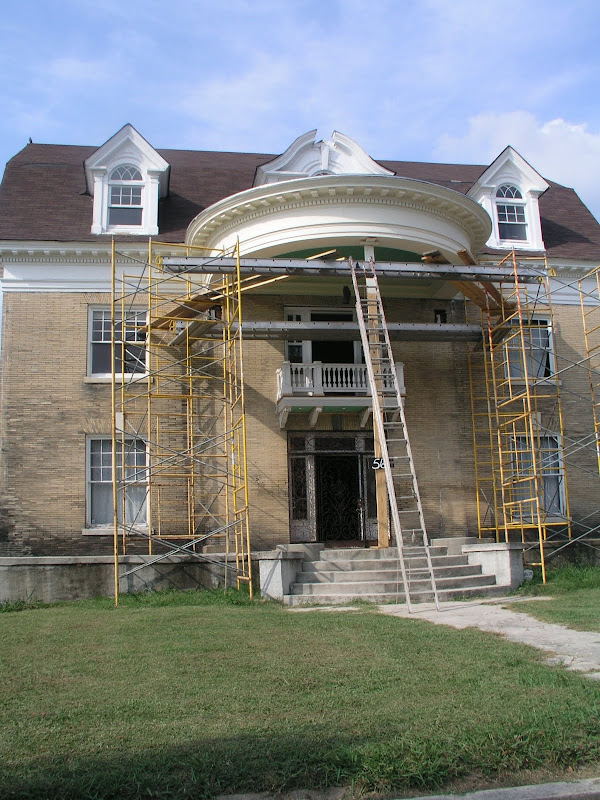 This one appears very solid and well-cared for ... today. 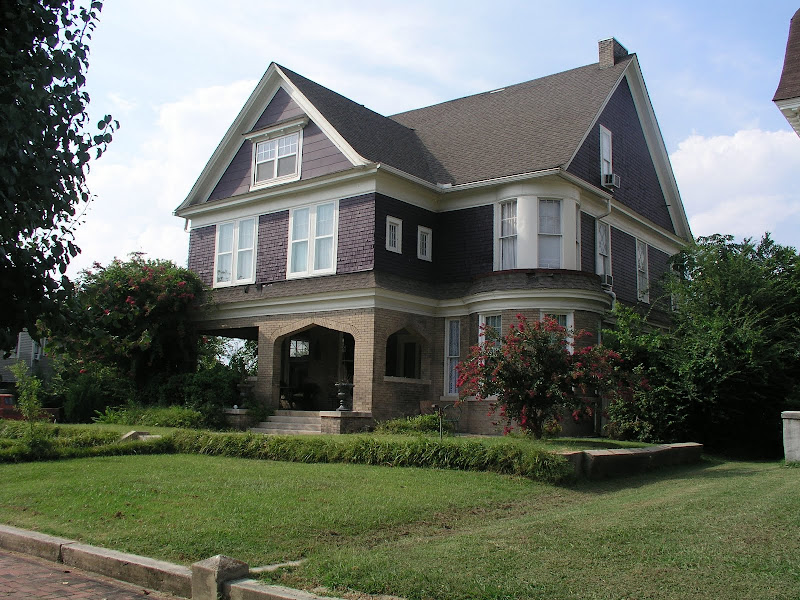 It's on the right in the picture below. It was May of 2003.
Approximately 2,250 homes in Jackson and Madison County were damaged when a series of powerful tornadoes struck.
The inside of the Hays House, left, was gutted ... leaving only its red bricks. The owner had dreamed of turning her beautifully-restored two-story house, which dated to 1857, into a bed and breakfast inn. She was on her way toward meeting that goal when the tornado hit. 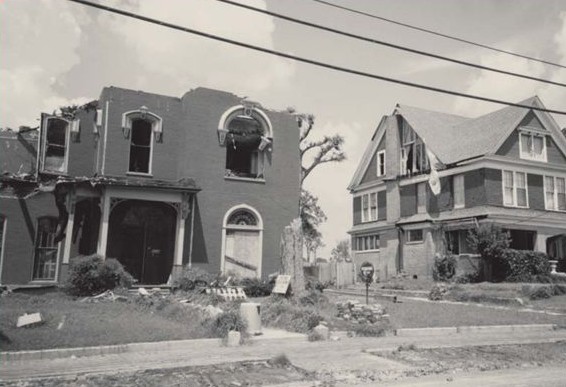 The vacant lot on the right side of the photo below is where the Hays House stood. This frame Victorian is being scraped and prepared for a new coat of paint. If you look carefully, you'll see the owner sweeping the roof of the front porch. 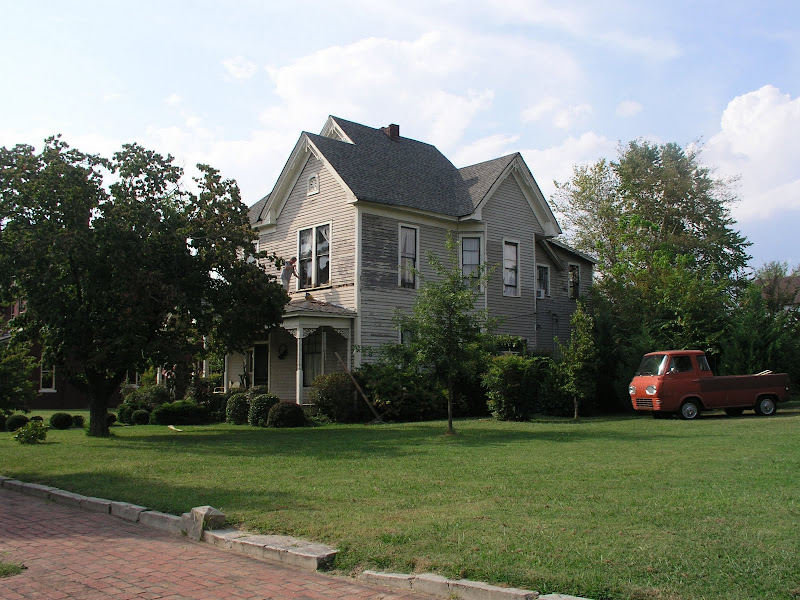 And the front view. Don't you love that L-shaped porch? 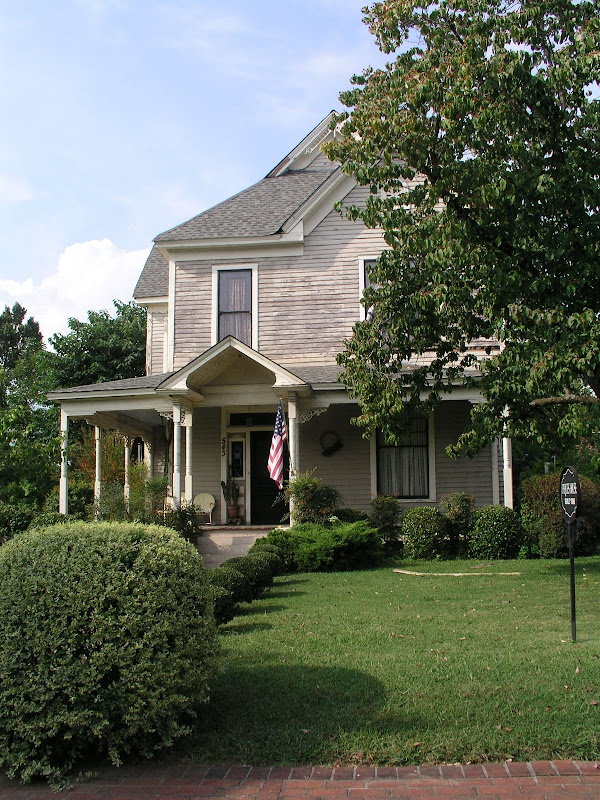 Here's another fantastic Victorian home. The current owners lived in an even larger house on the street. Unfortunately, it was damaged beyond repair by the storms and had to be razed. They sold what materials could be recycled from their former residence and began the restoration of this one. 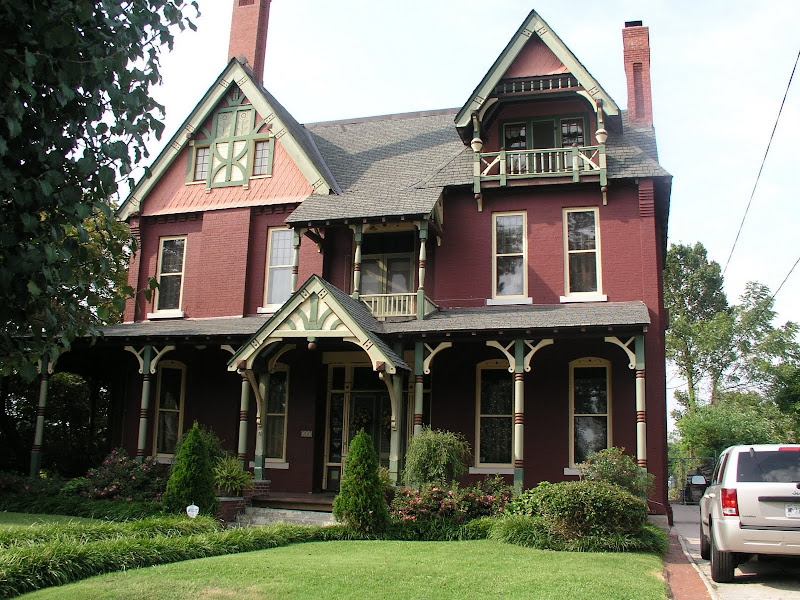 This garden is across the street from them. 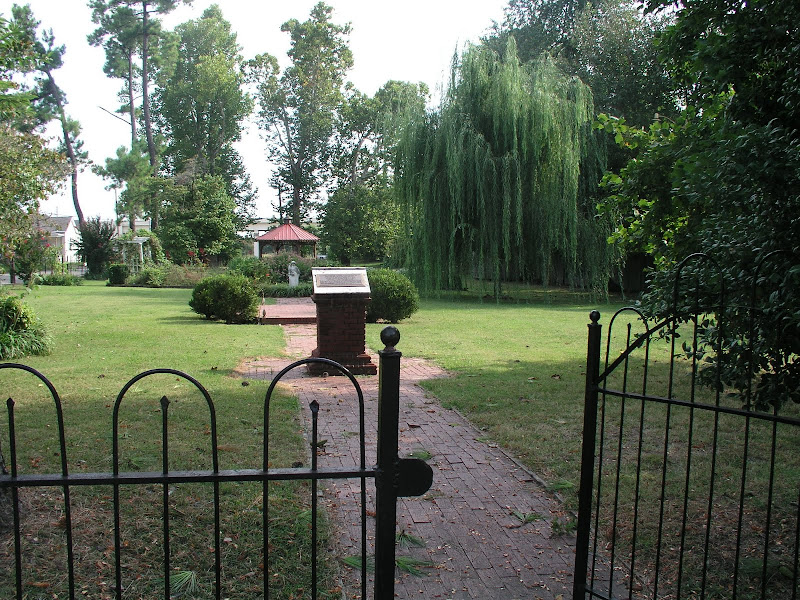 It's dedicated to the memory of Mae Scott Oglesby. The sign below says she came to the street as a bride in 1953 and lived there until her death in 1990. It goes on to say that she was a "tall woman who cast a long shadow." 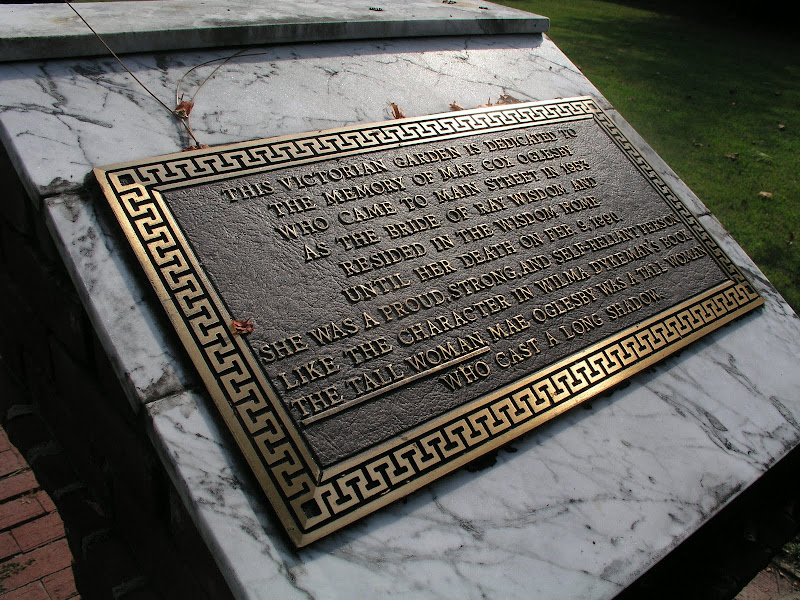 Another view of the garden ... with crepe myrtles in bloom .... 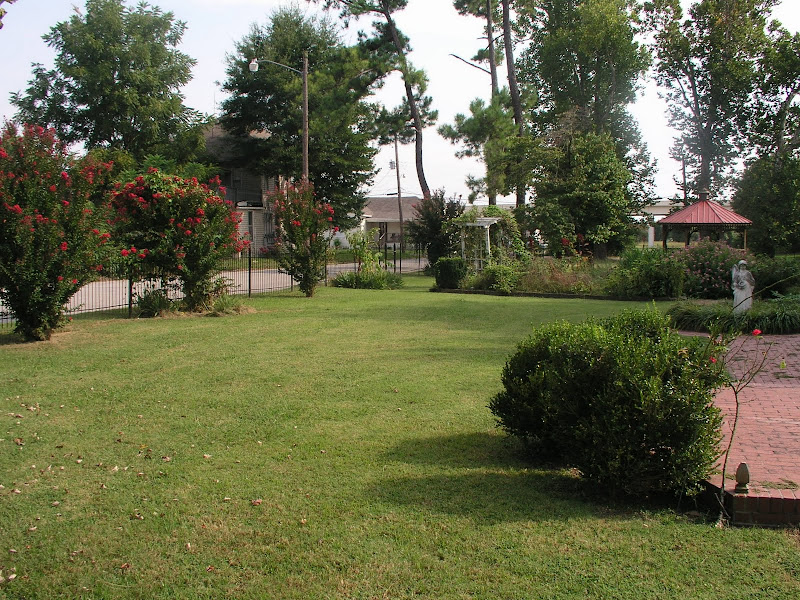 Did you enjoy our tour?

P. S. Don't forget to visit Susan at A Southern Daydreamer and check out this week's Outdoor Wednesday participants! Just click HERE and you're there!