It's time for another Tablescape Thursday, with Susan of Between Naps on the Porch. Alas, I don't have a tablescape for you today! I've been a bit under the weather (probably just seasonal allergies), and I've been busy posting tours for the past four days of historic homes and public buildings in Bolivar, Tennessee.

Just so you don't forget me ... or think I forgot about my tablescaping friends, I'm doing a mini ... very mini-post.

The picture below is from a party I attended recently. The hostess has a VAST collection of Mackenzie-Childs .... everything! At the start of the buffet line, she had a stack of enamelware "Courtly Check" chargers/plates and assorted sterling forks in crystal caddies. She also used real napkins ... damask ones. None of that plastic plate/plastic fork/paper napkin business for her! 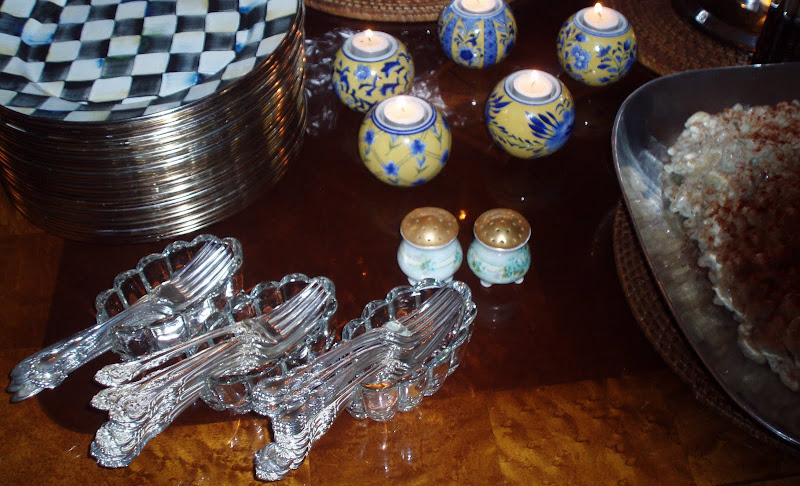 Below (in a TERRIBLE blurry photograph ... the only one I have of it) is the first tablescape in which I ever had a hand. It was done "by committee," so my only real input was helping select the folk art, borrowing the chargers from my friend, and painting Dollar Tree wine glasses to mimic the "Courtly Check" style. I hope MC doesn't mind --- it was for a charity event.

I used the paint I had handy: Golden artists colors, thinned with glazing medium. I was certain it wouldn't last, but they only had to make it through one luncheon as water glasses. I painted the bottoms of the glasses red to match the round rattan placemats. I used masking tape to create straight edges above and below the check-patterned band. Then I painted irregularly-sized "squares" (shading the black and white with other colors and blending slightly).

I avoided areas where hands and lips would touch the glass in hopes the paint would stay on ... just long enough! The glasses were given to the lender of the plates. I assured her that they would be "for display only."

Well, she used them for a dinner party! One of the glasses accidentally went into the dishwasher ... and survived! Who knew??? 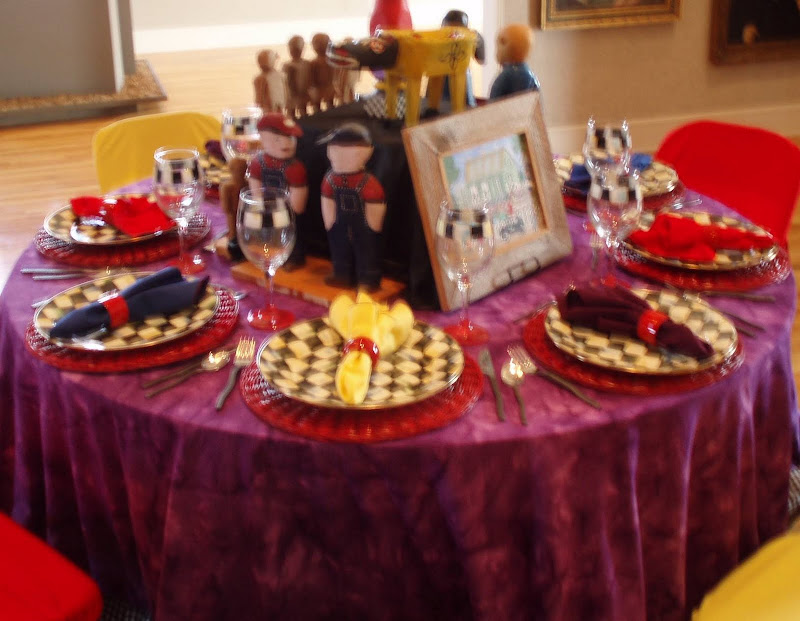