This weekend, I went to an estate sale in Bolivar, Tennessee. The sale was held in a circa 1848 home that sits on a 9.5 acre lot. For decades, the home was owned by a local doctor (several medical bags were among the items for sale). I had been in the home once before, when it was part of a tour of Civil War era private homes and public buildings.

It's time for another Outdoor Wednesday at A Southern Daydreamer. I hope you'll stop by, say hello to Susan, and check out all the other participants. Thank you, Susan, for making this event possible. 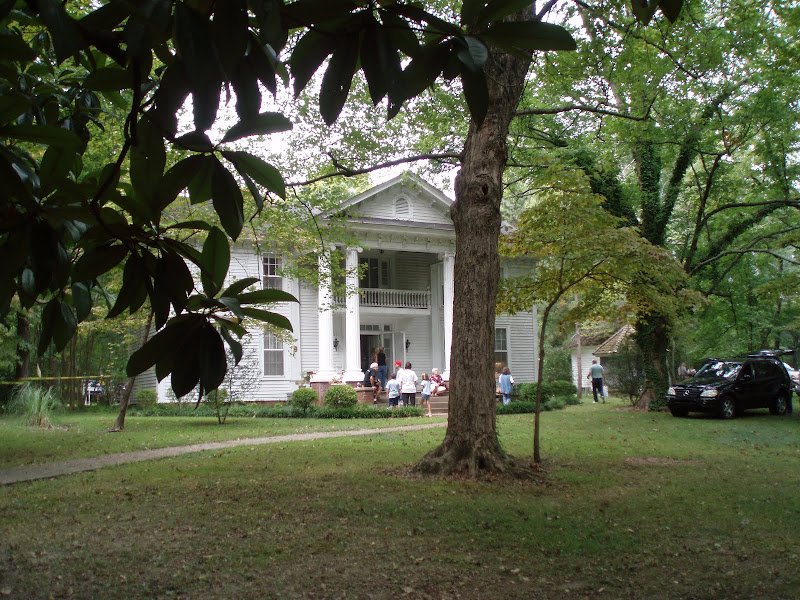 I didn't buy much, and didn't expect to. I wanted to go primarily to tour the house again and have the always-interesting experience of visiting Bolivar, Tennessee. It's about 30 miles Southwest of Jackson. In the early to mid-1800s, Bolivar was forecast to become the second largest city in West Tennessee (after Memphis).

The Hardeman County town is located on the then-busy waterway of the Hatchie River, which brought it fortune and commerce. That prosperity was fleeting, and the current population (2000 census) is 5,802. More than 100 of its buildings are on the National Register of Historic Places. Most of those reflect the town’s pre-Civil War prosperity. That time lives on today in the way the citizens have preserved the past. The town is a still-living time capsule that makes for a memorable day or weekend visit.

I did purchase these wine glasses for $1 each. They're in perfect condition, appear vintage, and I really like the classic columnar shape of the stems. They also have Libbey's patented Safedge rims, so I'd feel comfortable putting them in the dishwasher. 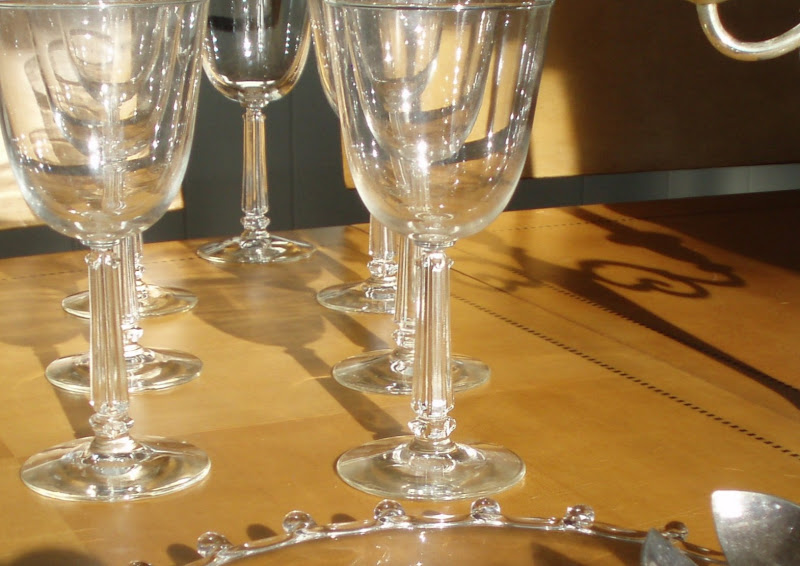 I bought this Heisey "Lariat" (1942-1957) cookie plate just down the street at an "antiques yard sale." I paid $1 for it and $1 for the made-in-Italy silverplated salad servers. 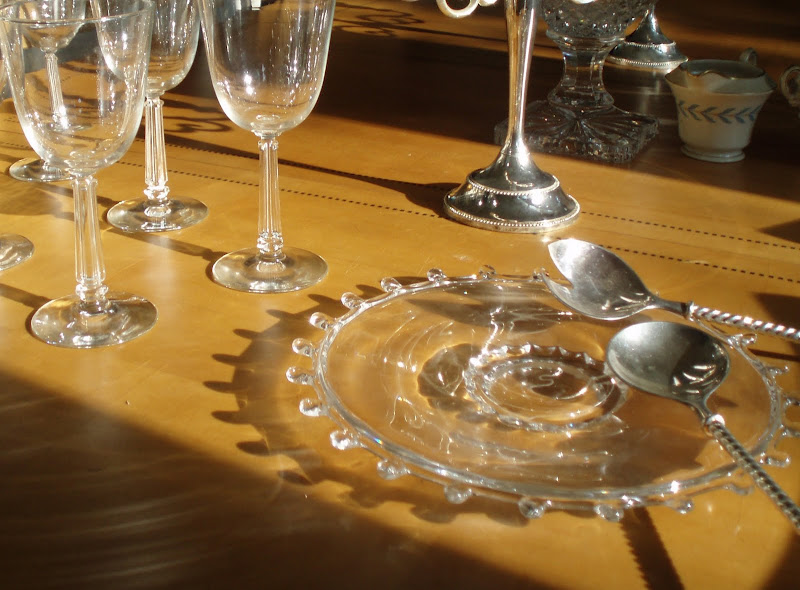 The Syracuse China creamer and covered sugar also cost $1. I picked them up at my favorite junk store on the way to the estate sale. The pattern is "Sherwood," and it was manufactured from 1949-1967. I already had quite a few dishes in this pattern, so I recognized it immediately. The tops of the pieces were covered in grease and grime, so I knew there was a chance they could be stained and brown from years of use and neglect. 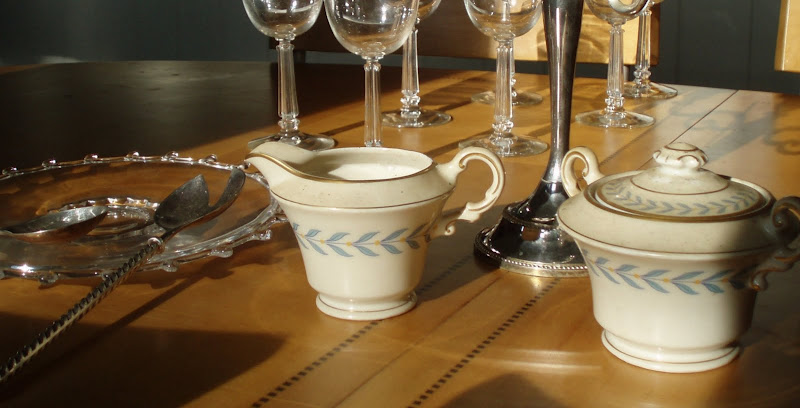 As the sign below indicates, the house is in the North Main Historic District. 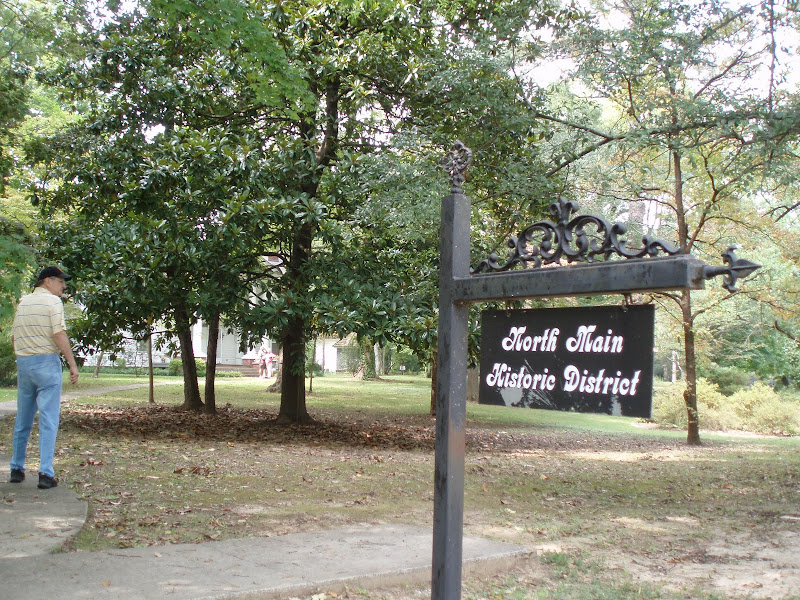 It was early afternoon, and there was a steady stream of shoppers and curiosity seekers. One lady mentioned that she had driven in from Jackson, Mississippi for the sale. 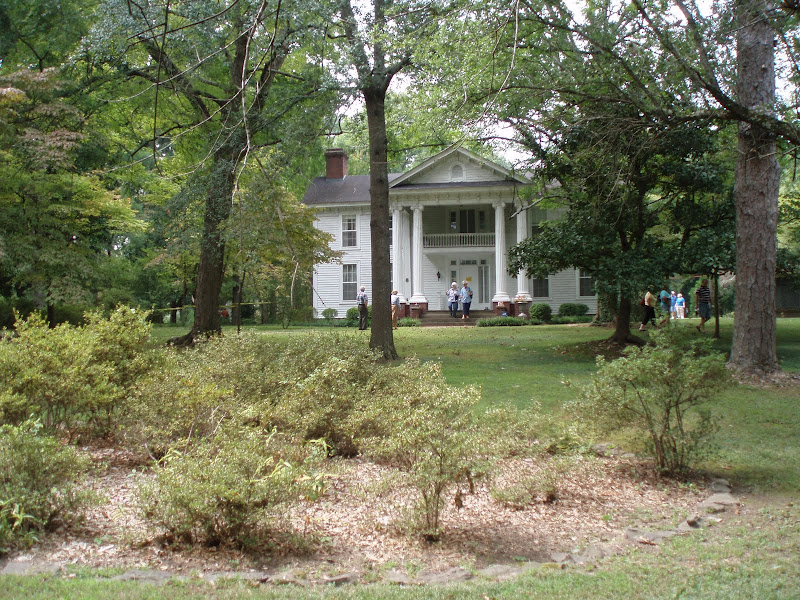 Some were relaxing on the porch while their families shopped. 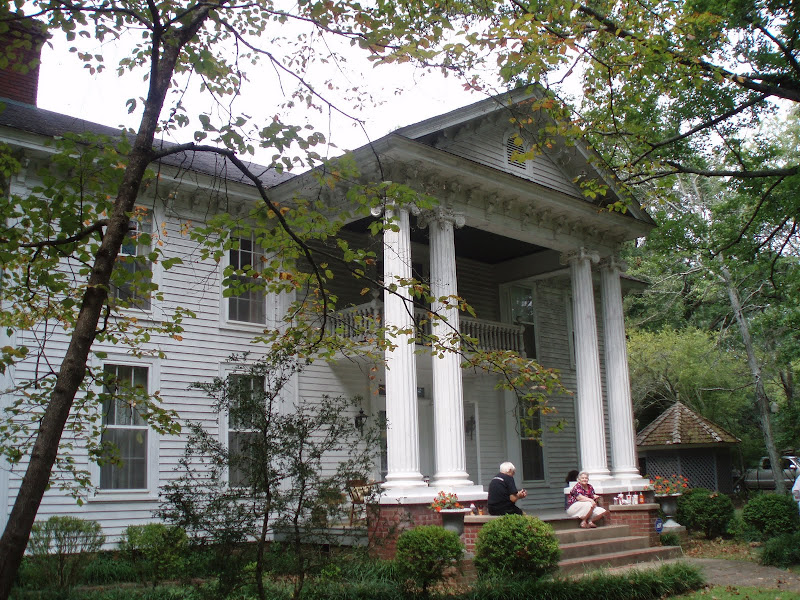 Looking upward, the grandeur of the place is obvious. Other than beginning to need a coat of paint, the house appears to have have been exceedingly well-cared for through the years. 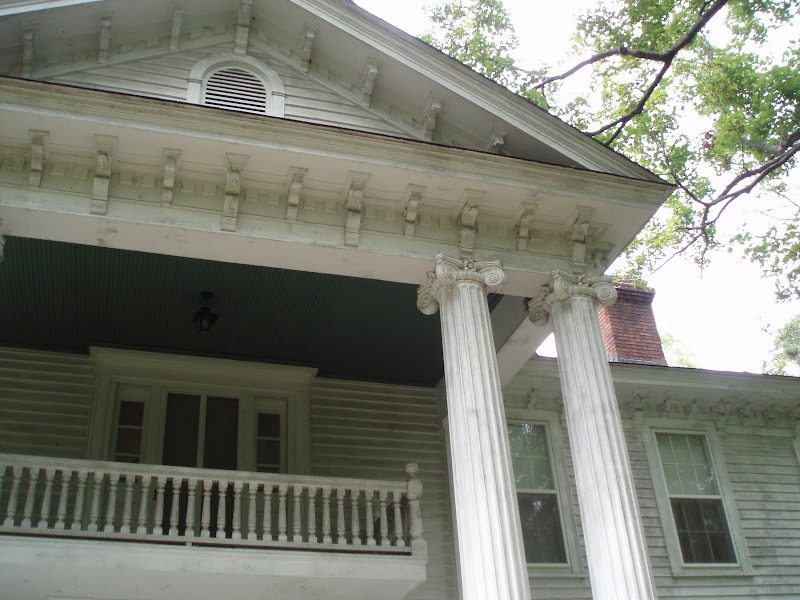 The view across the front lawn from an upstairs bedroom. 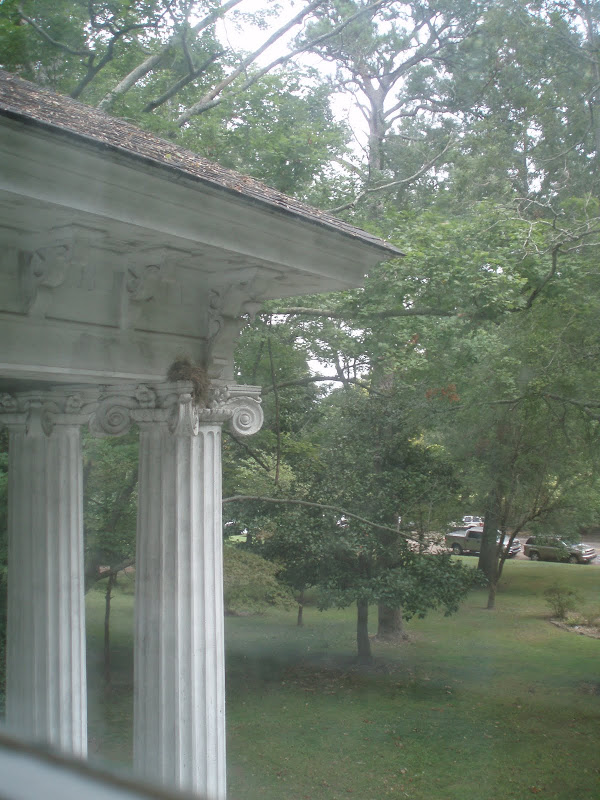 The grounds are extensive and well-tended. There are also several outbuildings. 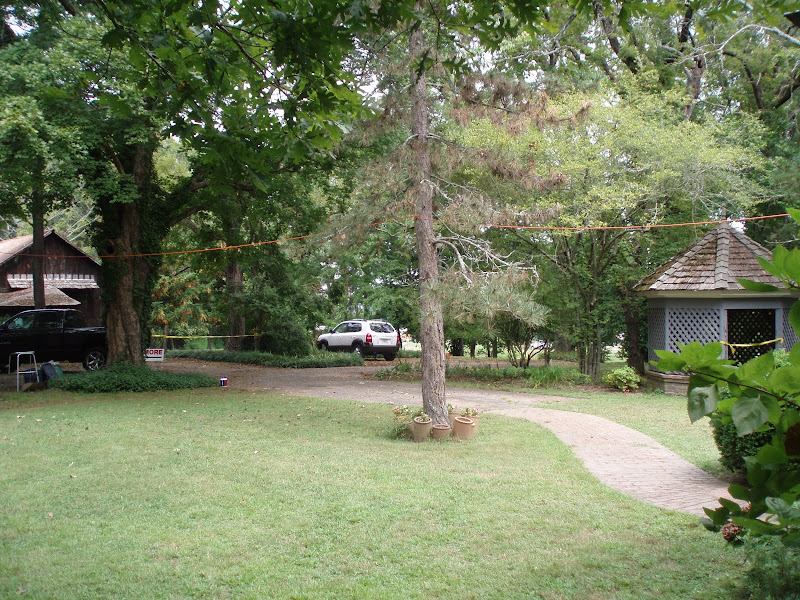 I thought this little barn was charming. 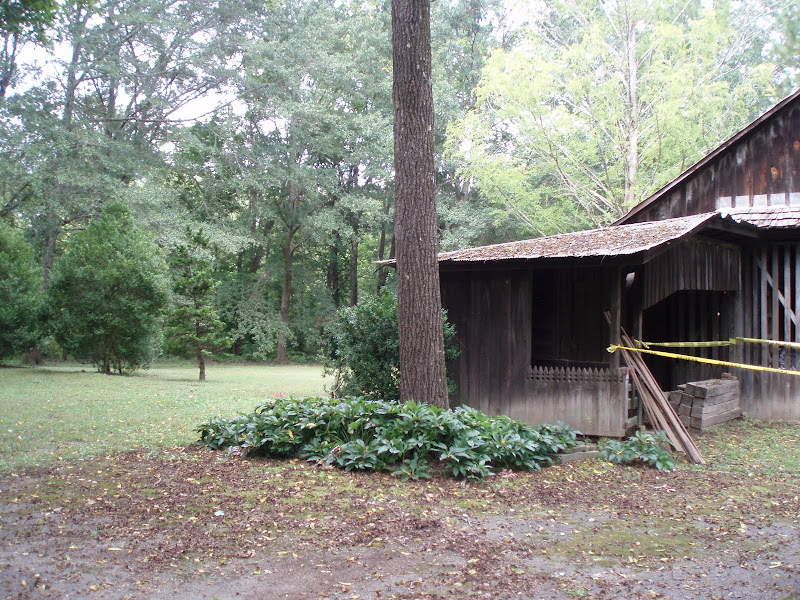 The interior shots turned out badly. I don't do well not using a flash and with no tripod! I included a few anyway ... to give you an idea of what I saw inside. Below, lots of crystal and silver ... I didn't see anything THAT different from things I already have (plus ... I prefer to pay much less than the asking prices were on the first day of this sale!). 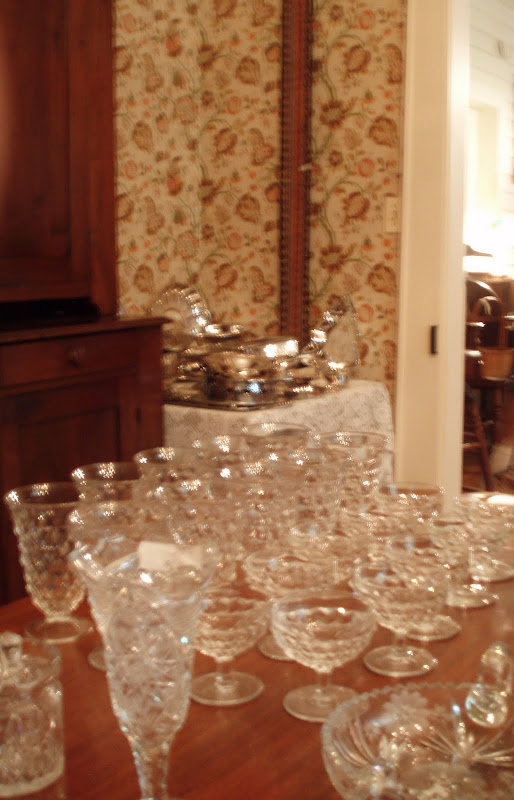 One of the upstairs bedrooms. In these old homes, there are few closets, so the large wardrobes/armoires were very much needed. The bed in the picture was what the lady from Jackson, Mississippi, came to see (pictures from the sale had been posted on estatesales.net). 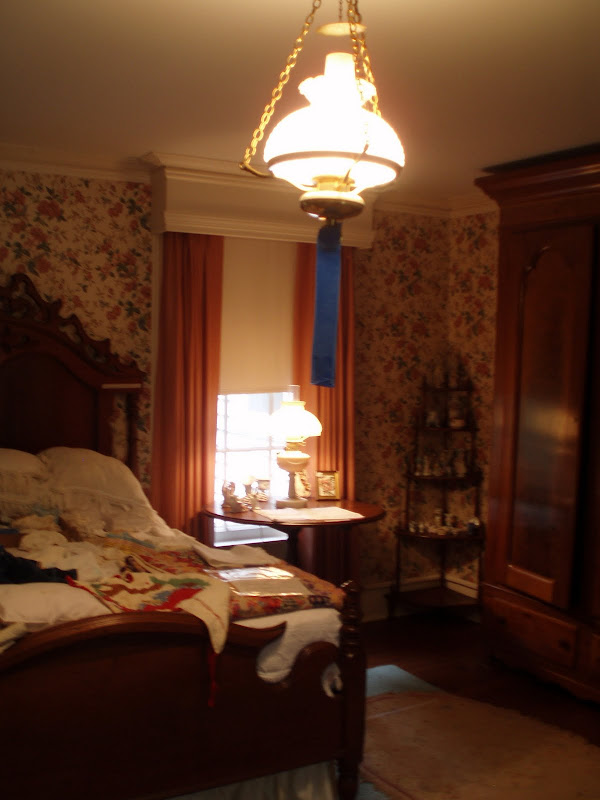 Estate sales like this one always have stacks of old books and magazines. I'd never seen such a complete matched set of "bedroom ceramics." The pitcher and bowl, the lidded chamber pot, and 4 other items comprised the set. 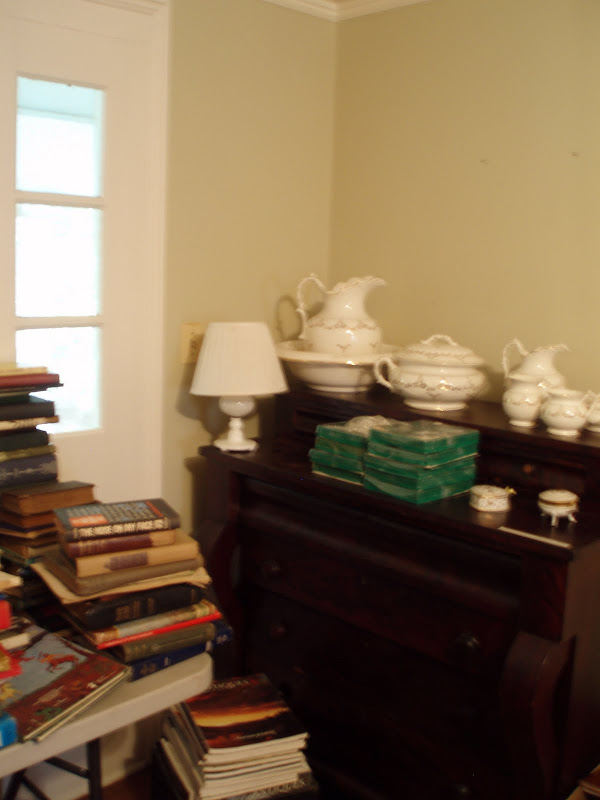 I was surprised to find that my favorite room was the wine cellar. The former owners must have been wine enthusiasts. The glasses I purchased were sitting on the counter to the left and behind the telephone. 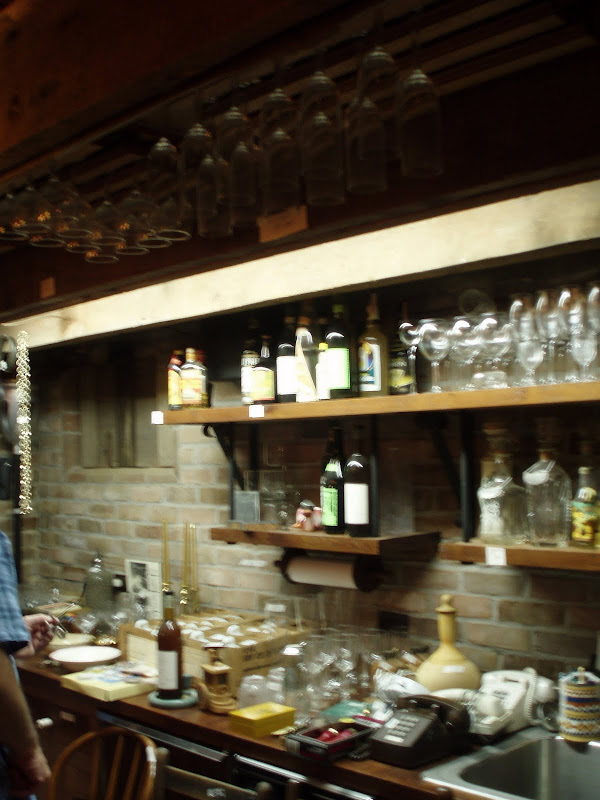 Lots of wine storage! Right after I took the picture, the LIGHTS went out! I'm thankful that there was a small window above the stairs. Still, it was difficult to gather up "my" wine glasses in the near-pitch darkness. I persevered!
We later learned that the lights were out in much of the town. 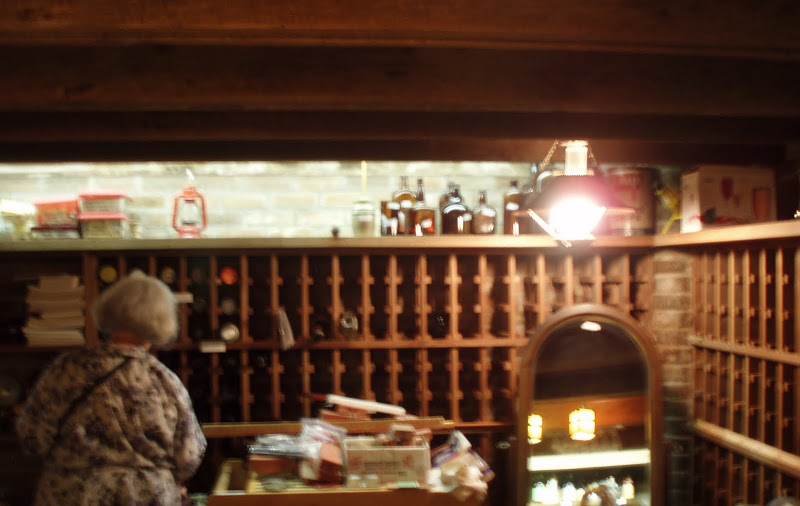 The former owners had collected all sorts of things, including old wooden tools. 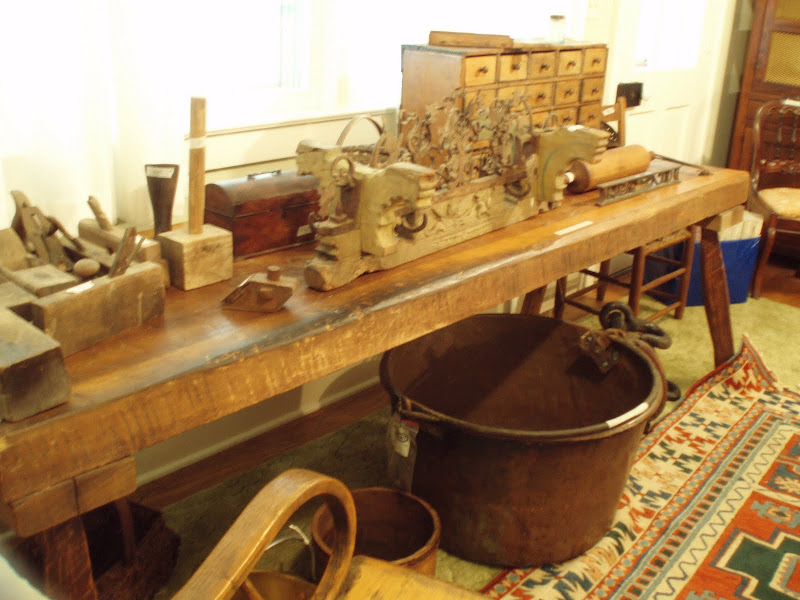 And a variety of flower frogs ... 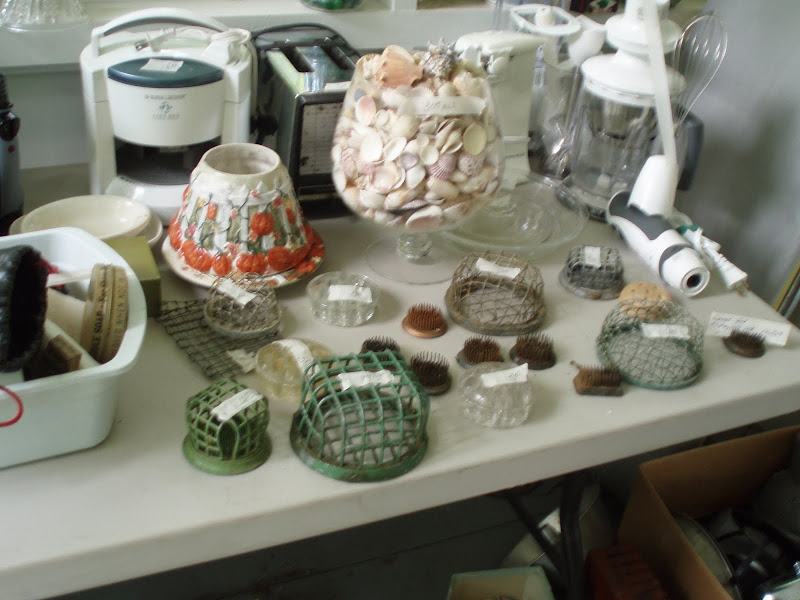 The sale items spilled over to the outside. It appears that there have been additions to the original house, but they're nicely done and maintain the integrity of the home.
If you're in the market for a piece of history, the home and 9.5 acres can be purchased for well under a half million dollars. 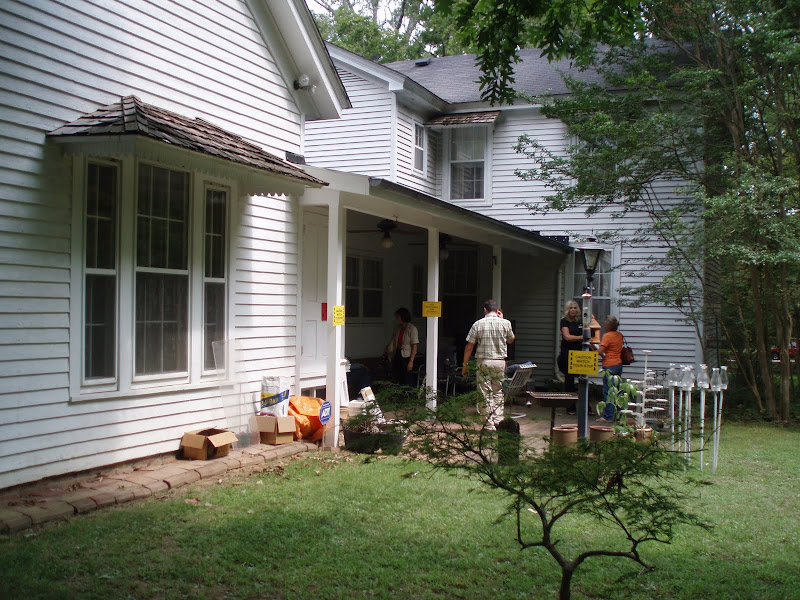 Here's the house down the street where the yard sale was being held. They were clever to schedule it on the same day as the estate sale! They're antique dealers. For the sale, they had marked most items to half the regular price. 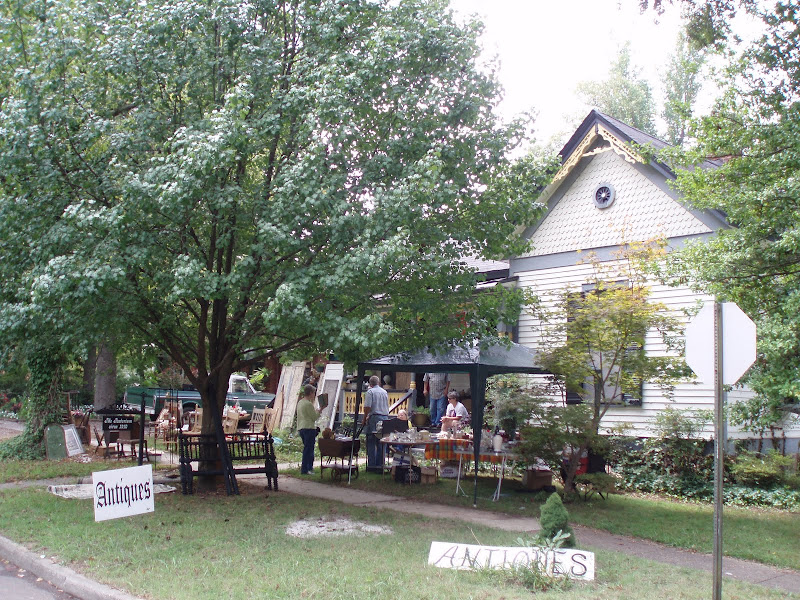 Now for a very minor metamorphosis. I soaked these pieces in warm soapy water, and then tried washing them as usual. Years of grease, grime, and dust had created a stubborn film. I reached for the Dollar Store brand glass and surface cleaner, and it worked like a charm. You can see the difference between the color of the lid (which I cleaned first) and the area surrounding it. 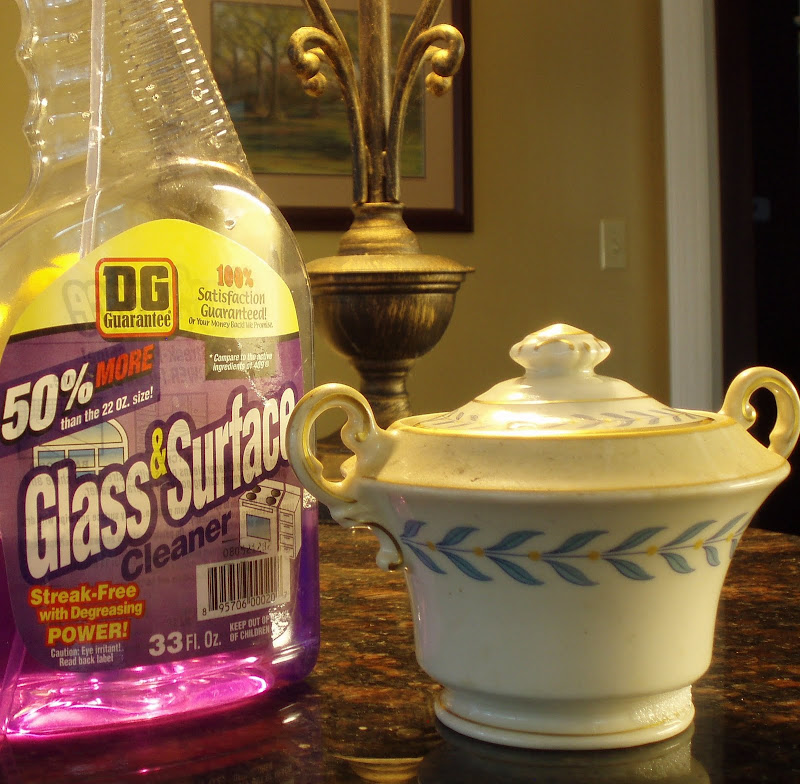 That's it for today. Hope you enjoyed!
I took dozens of other pictures of historic homes and public buildings in Bolivar. Would you be interested in touring them with me in future posts?
Just let me know! ;)