It's time for Tablescape Thursday, hosted by the inimitable Susan of Between Naps on the Porch! Be certain to visit Susan and all her talented participating guests. The tables are set; let the fun begin!

I had already selected the china, crystal, and silver for this week's table. The one I set for you last week included items that might have been chosen by a bride of the 1930s. I decided to move forward a quarter century to the early 1960s. Then, in a comment on "1930s Dinner Party," Bonnie of Diamonds & Daisies suggested that I do a post inspired by a Mad Men cocktail party.

Mad Men, as I'm sure you all know, is the award-winning program on the AMC Network about advertising executives set in the early 1960s. "From the clothes and hairstyles to the incessant smoking and ludicrously dated social codes, Mad Men serves as a time capsule for the middle of the last century, and food and drinks play a particularly prominent role in recreating the period." There's an inordinate amount of boozing on Mad Men—it seems as if someone pours a cocktail in just about every scene.

I couldn't bring myself to include the smoking aspect, but the idea of a cocktail (or two) didn't offend me. Here's dinner, circa 1961: 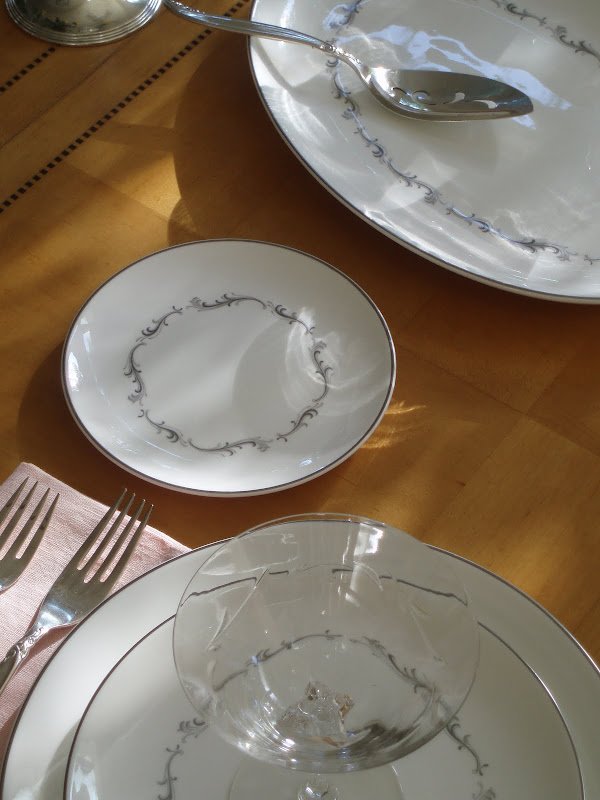 We're back in the solarium this week. No tablecloth or placemats ... just clean modern lines. 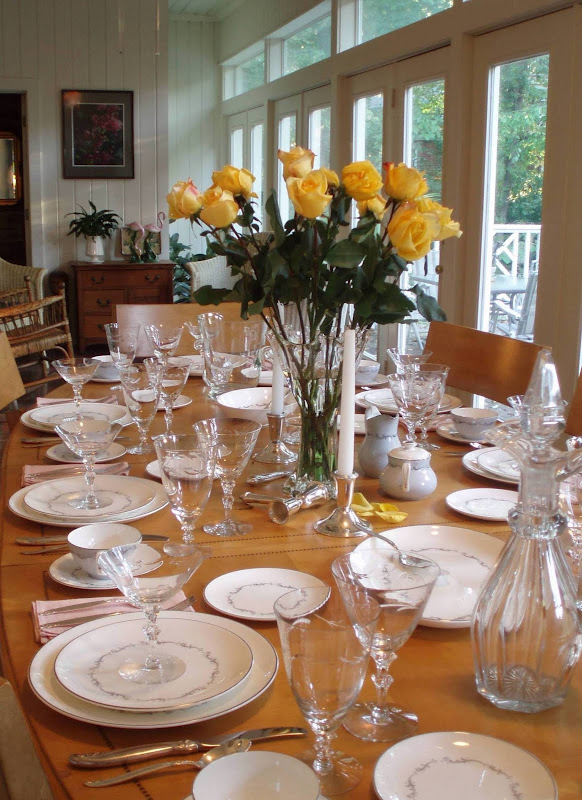 The flatware is one of those "love it or hate it" mid-century patterns, "Leilani" by 1847 Rogers Brothers (1961). I happen to like it. I enjoy the way the tips of the handles curve inward toward the plate. 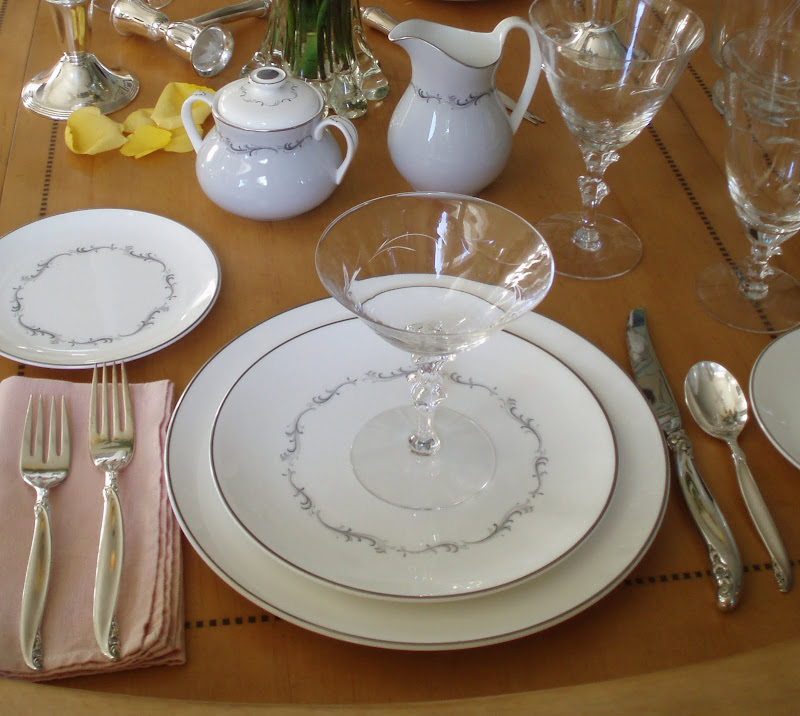 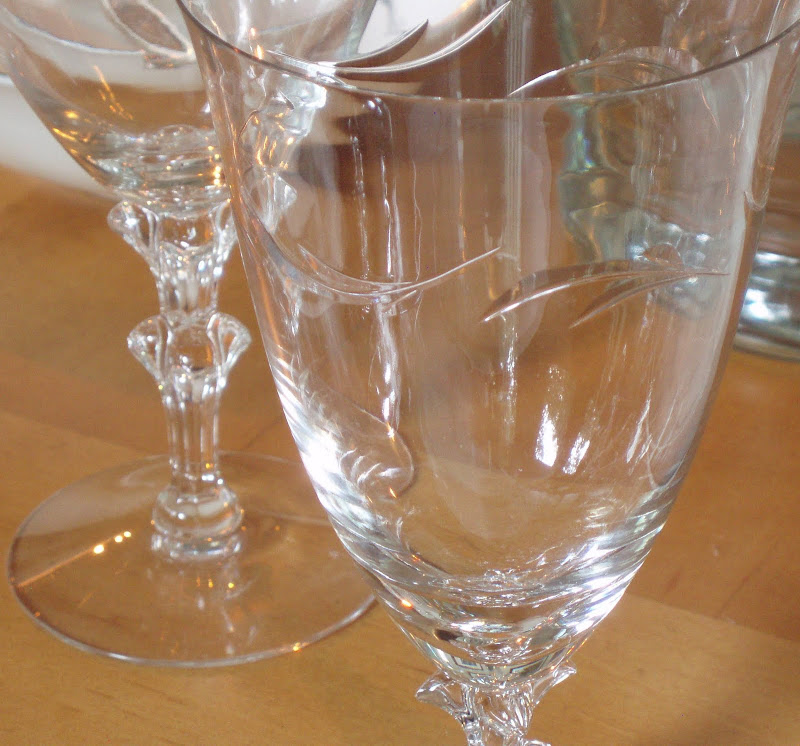 The china pattern is "Coronet" by Royal Doulton (1957-1979). The china and crystal were displayed together in a china cabinet at an estate sale. The first day of the sale, I purchased the glassware. It seemed a shame for it to be separated from the china (after almost 50 years together!), so I went back the second day and bought the dishes. The grand total was just under $80. 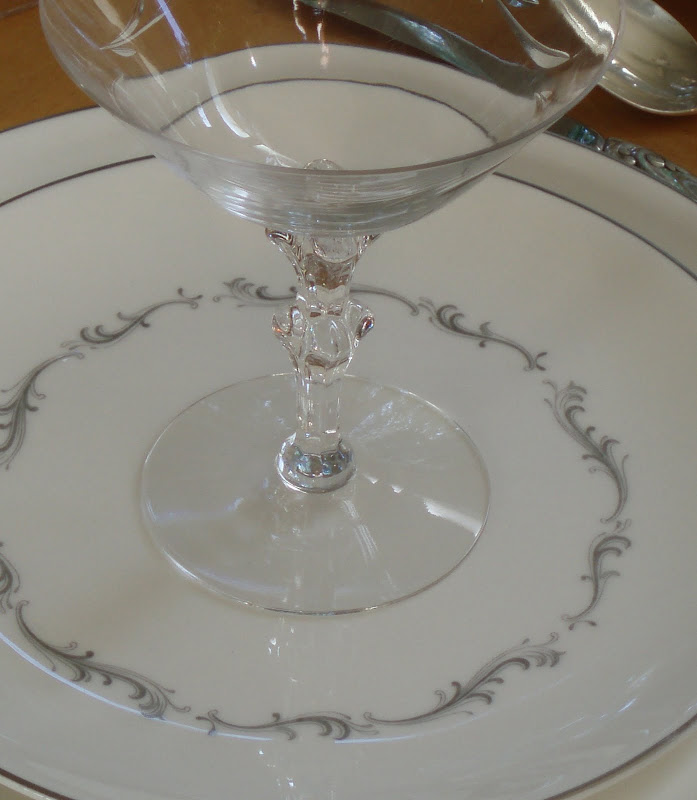 The white peacock painting from last week's post has been returned to the bedroom. The "usual" is back in this room (mostly watercolor paintings I did a few years back). 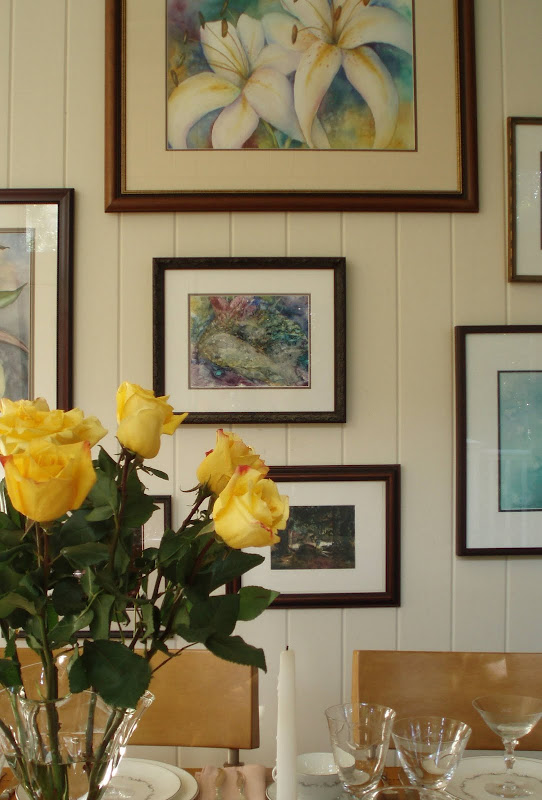 I needed a centerpiece FAST ... I was trying to get pictures taken before I lost the light. I ran in the supermarket on the way home from work and selected these roses from a group that had been reduced to $2.99. I didn't even re-cut the stems ...just put them in water and let the vase "arrange" them. 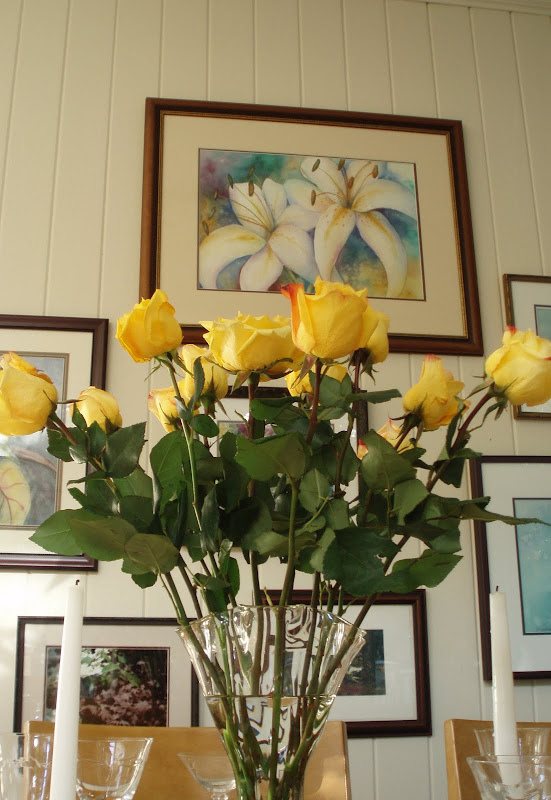 It's a vintage "carnation vase" perfect for any type of long-stemmed flowers. 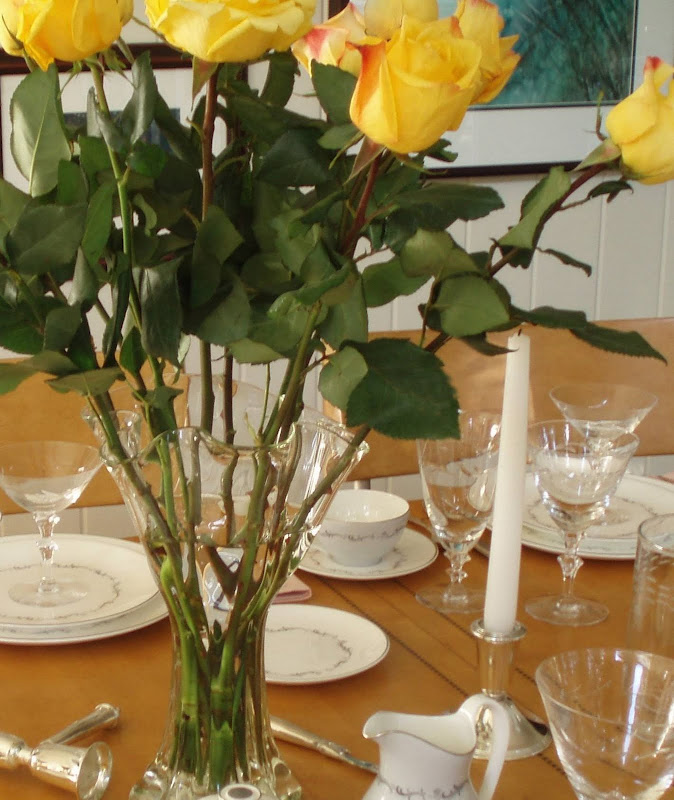 Since we're thinking Mad Men, there must be cocktails! Here we have a vintage silverplated shaker and martini glasses in a classic shape, updated with etched chevron and swirl patterns. The glasses are presented on a silverplated gallery tray. All the items came from thrift stores or estate sales. 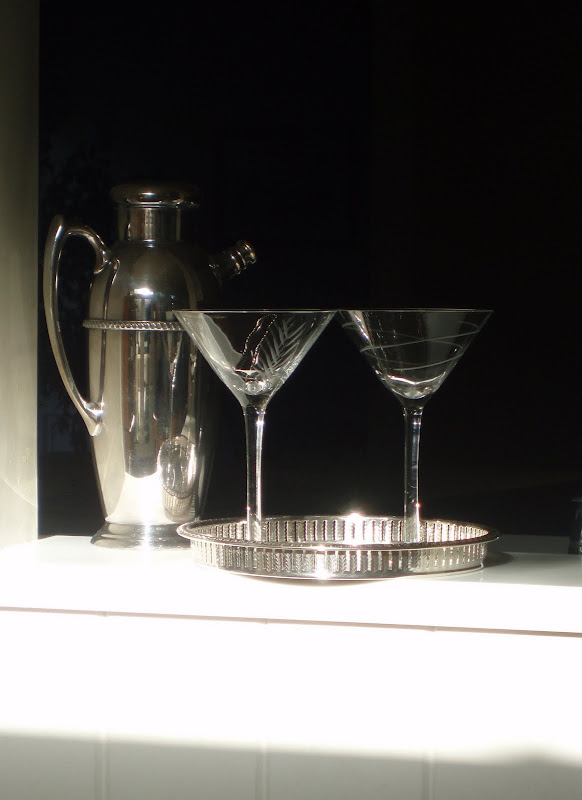 Dirty martinis are on the "approved" list of AMC's Mad Men cocktail guide HERE. I substituted vodka for gin (I know ... heresy to purists, but vodka has pretty much supplanted the role of gin in recent decades). It's in a four-to-one ratio with dry vermouth. The "dirty" comes from olive brine, added to taste. I like three olives in mine.

As did (famously) James Bond in 1960s films, I prefer a martini "shaken, not stirred." 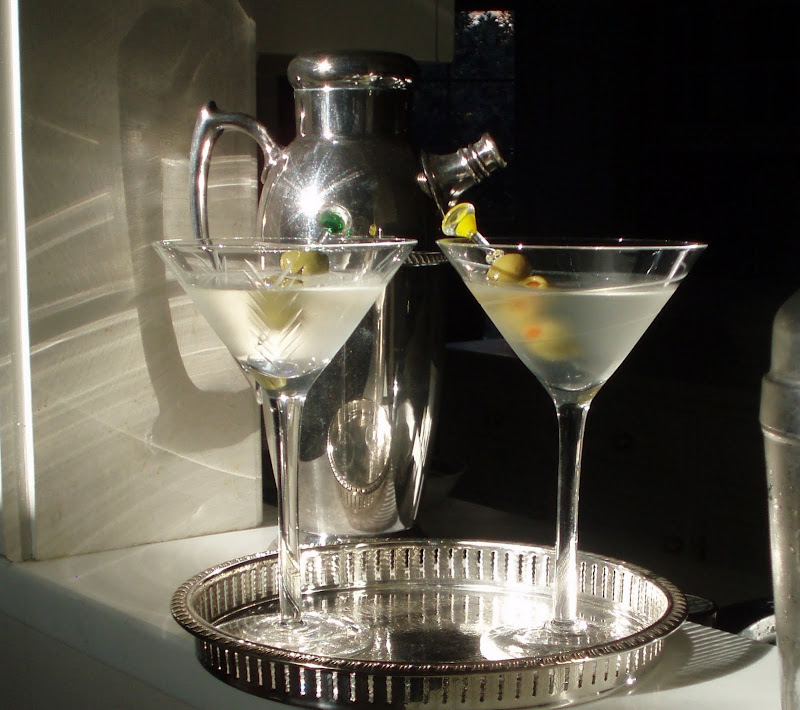 The view from the kitchen sink: 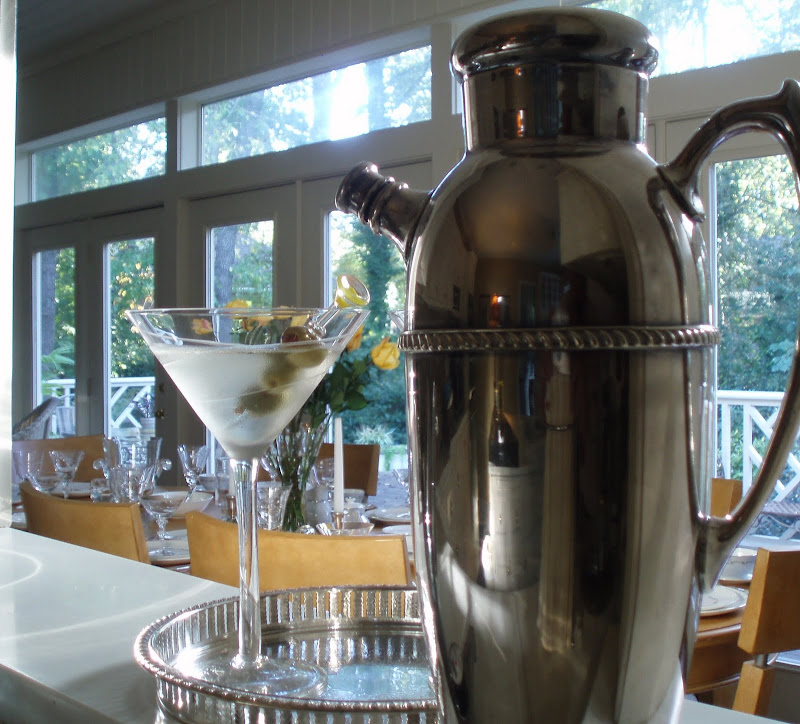 Late afternoon brings with it interesting patterns of light and shadow ... 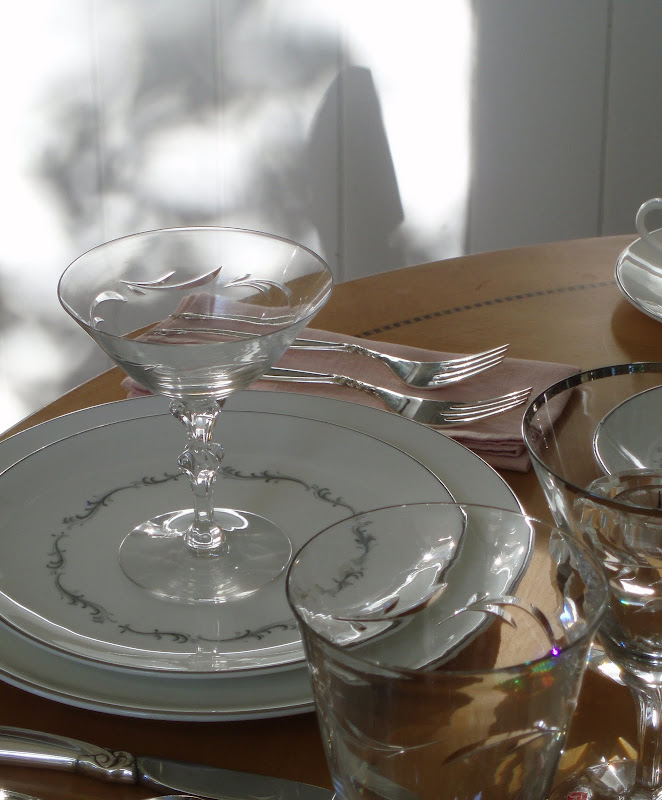 At one point the sun poured in full-force ... 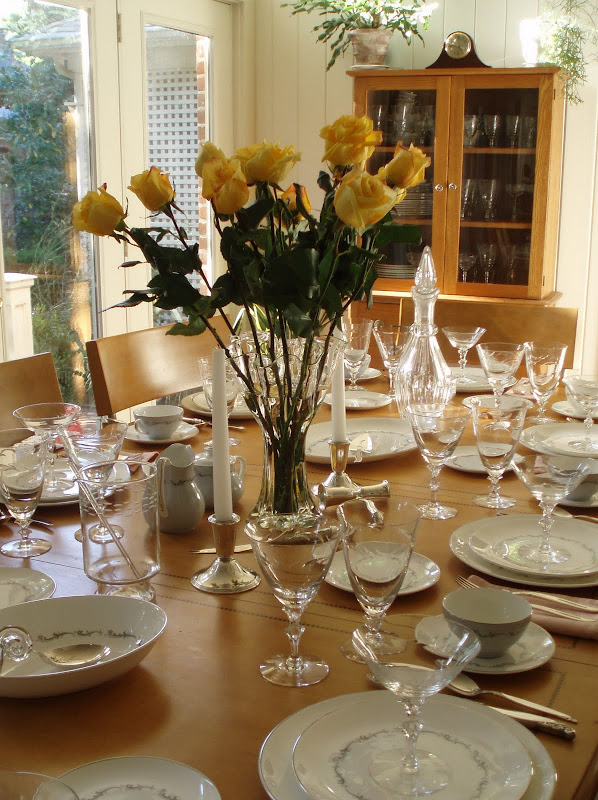 I like the phenomenon that happens when bright sunlight makes solid objects appear near-transparent. 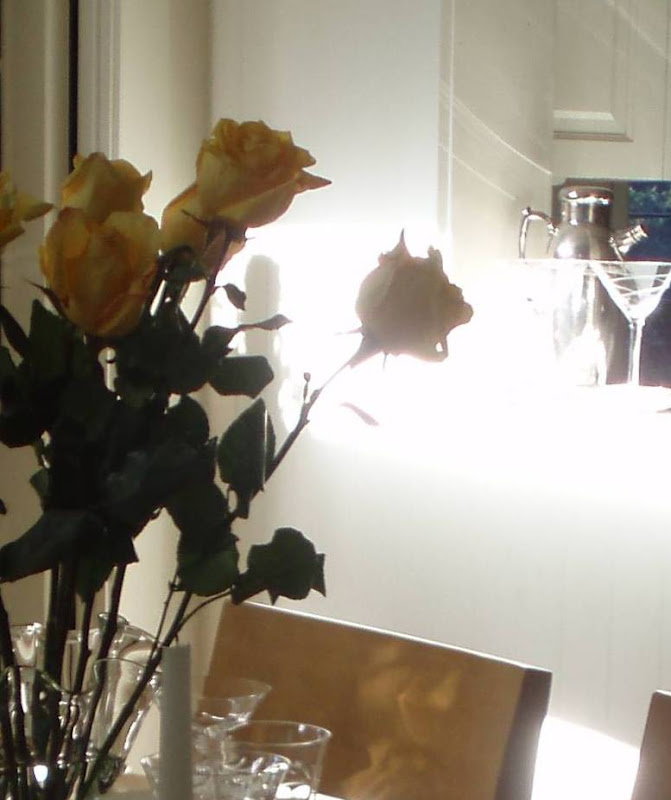 I lacked one glass having eight three-piece place settings. I looked through the odds-and-ends in the crystal/silver closet and found this vintage Fostoria glass (the knife blade is pointing toward it). It has a similar height, shape, and clarity to the rest of the crystal. The original Fostoria label is still attached (and it cost only 99 cents at Goodwill!). It could be considered the special glass for a guest of honor (how's that for spin?). 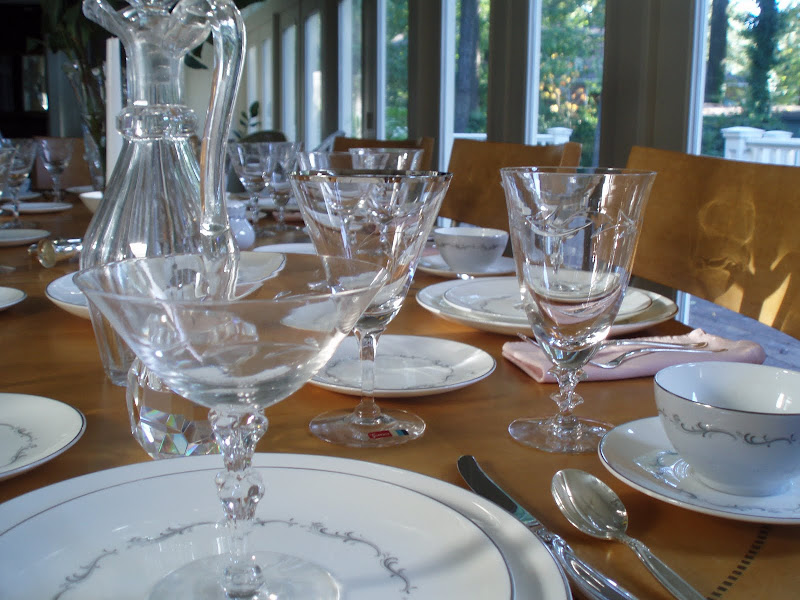 Day's end approaches ... time to light the candles. I used tealights in faceted holders at the end place settings and, along each side, placed the candles in simple vintage tall sherbet (or champagne!) glasses. The candleholders are sterling ($5 for the pair on the last day of an estate sale). 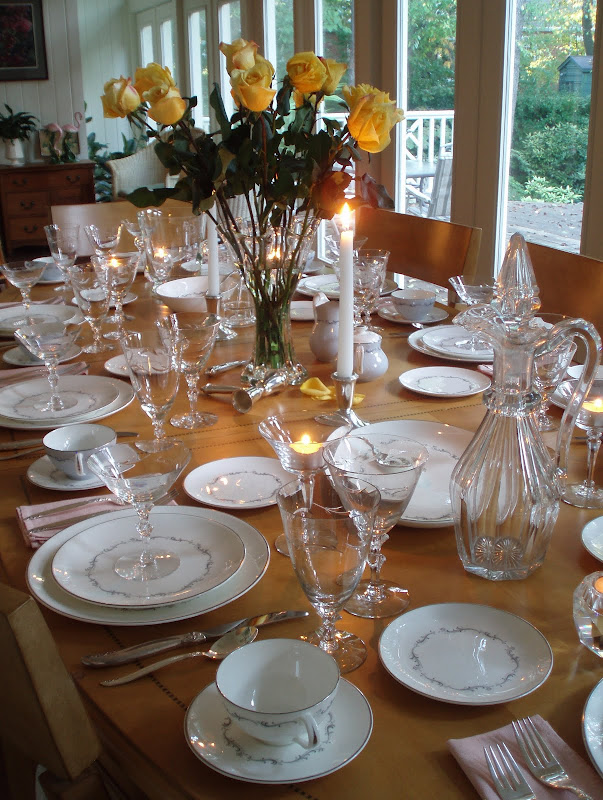 The vintage decanter is lead crystal. Another estate sale bargain ... 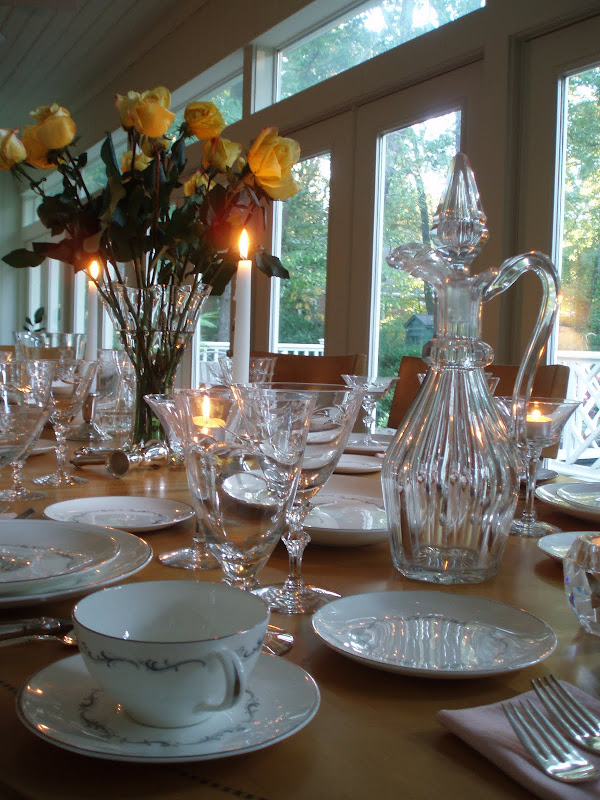 Here, I experimented with turning on the overhead light. It adds warmth, doesn't it? 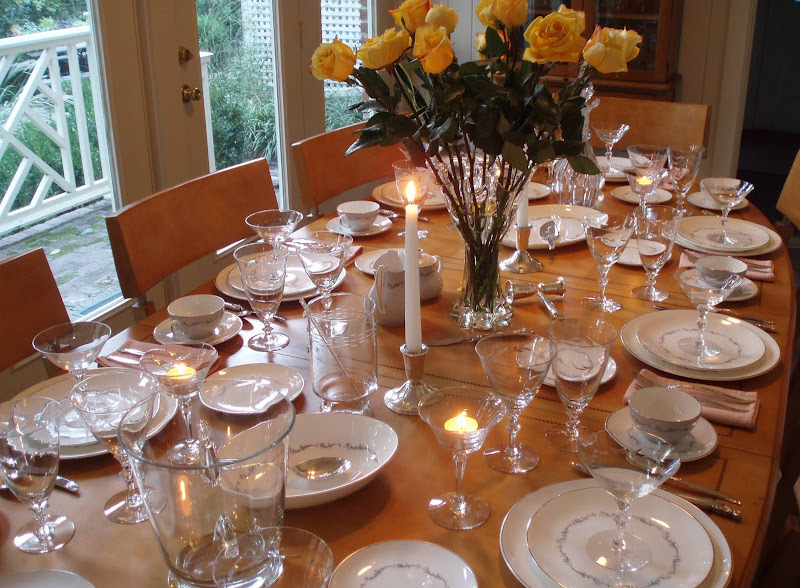 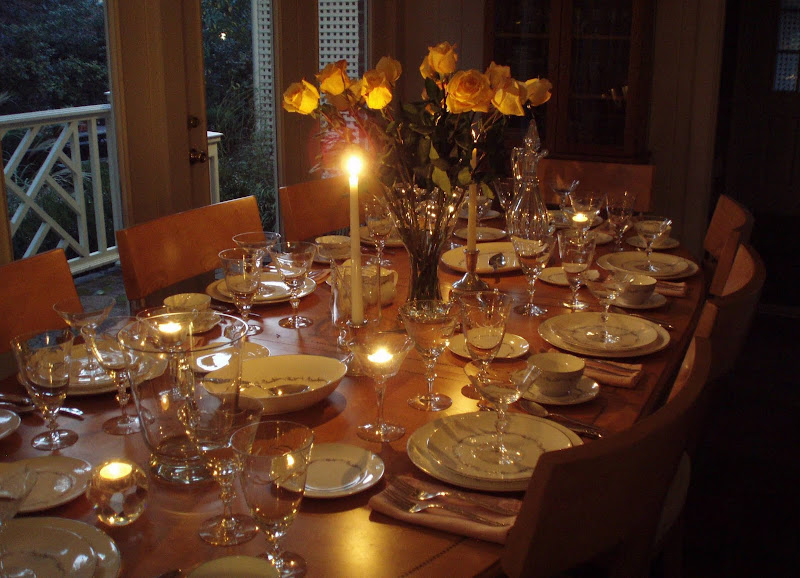 I like the effect of the candles "up lighting" the roses. To further the "thirsty" Mad Men theme, I placed some vintage silverplated bar tools beside the vase. 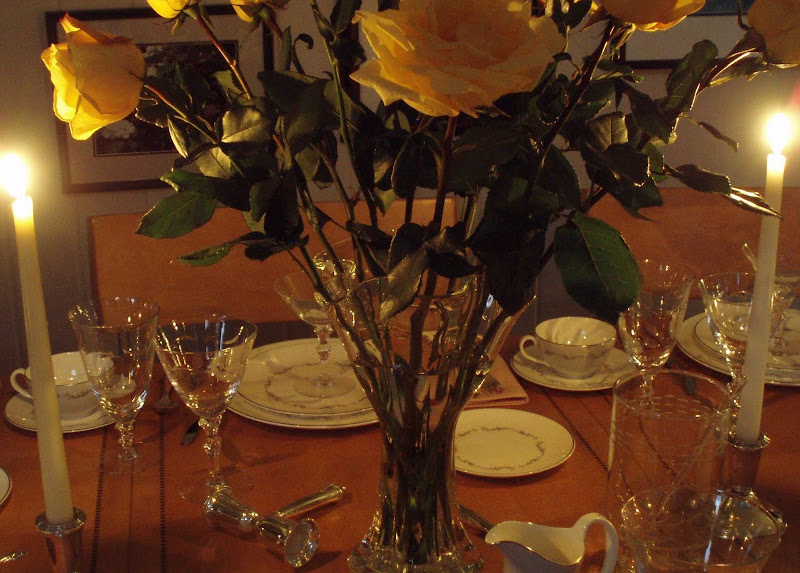 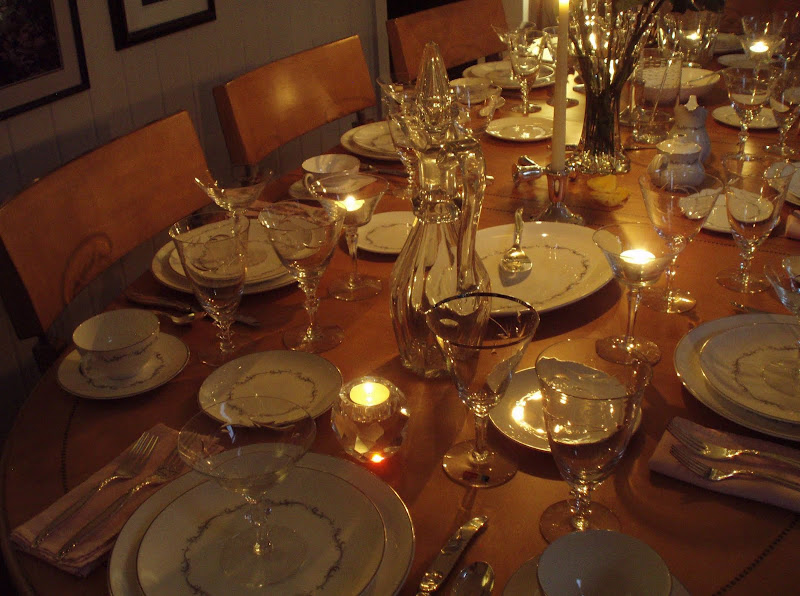 And for those who perfer a stirred martini .... see lower left (I'm SO careful with that glass stirring stick!). 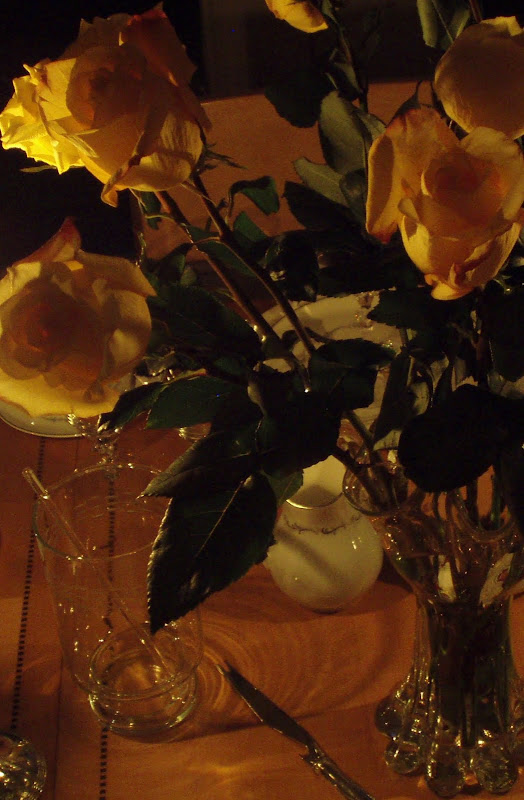 A vintage glass ice bucket monogrammed with an "S." Not my initial ... but does that really matter? 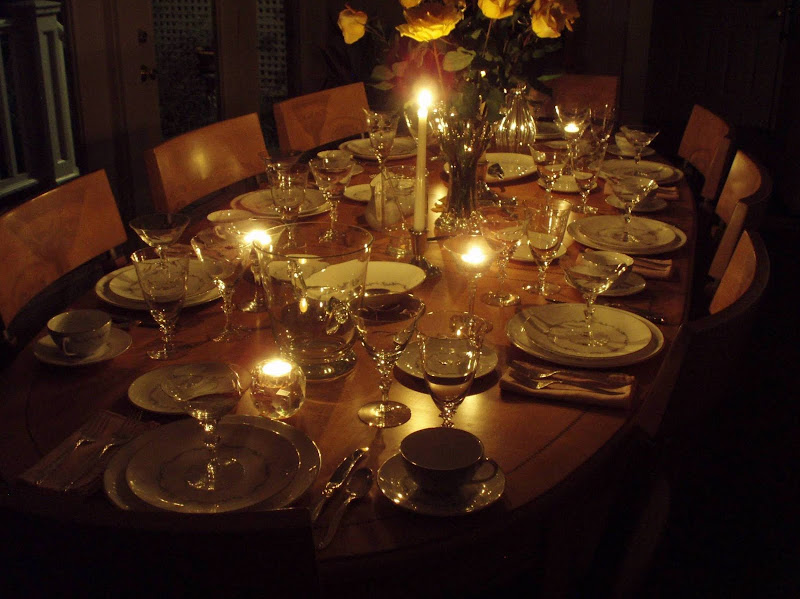 Illuminated only by candles and lights from the garden ... 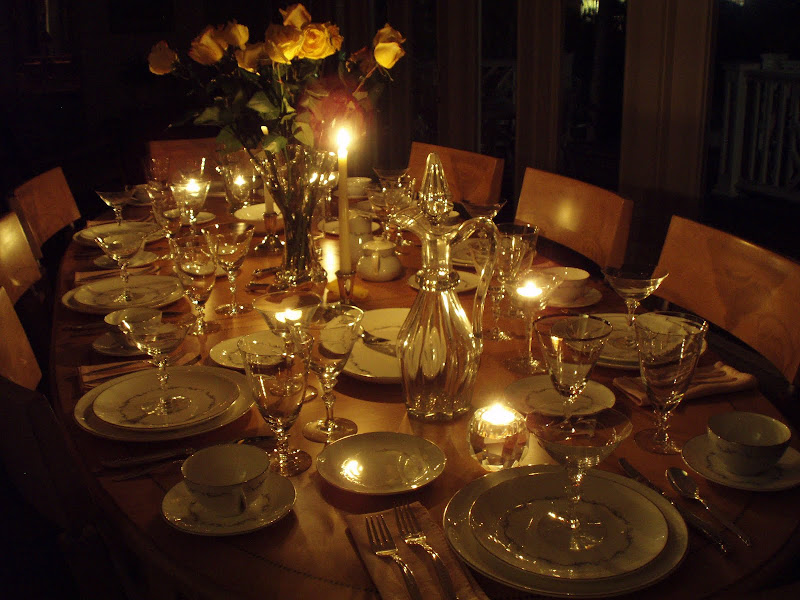 For a quick polish (as I did when I set the table with the Leilani flatware), these Hagerty Silversmiths' Gloves work well. They don't take the place of an all-out polishing, but they do work as the package describes. They cost around $15 for a pair.

The Leilani silverware came in this mid-century flatware chest (labeled 1847 Rogers Bros.). I purchased a large set on eBay for a very reasonable price (under $50, including shipping). It was in "barely used, if at all" condition. The Leilani demitasse spoons were another eBay purchase. Even though they weren't needed in this tablescape, I wanted you to see them. I think they're pretty adorable!

The Royal Doulton printed piece includes prices. It's interesting to think how they relate to an average salary in 1961. Entertaining stylishly was not an inexpensive pursuit! 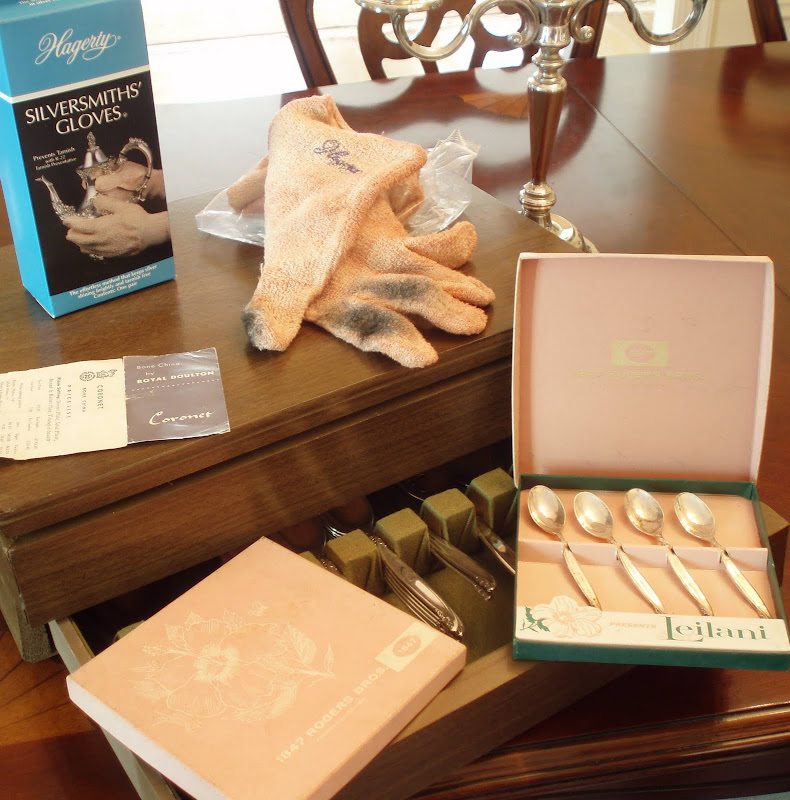 Perhaps I'd better call a cab ... just to be on the safe side!